MokaKat Goes To the Bahamas!!! 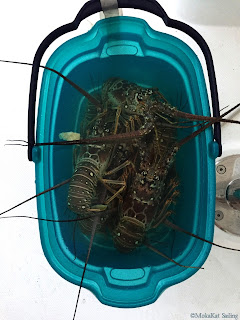 After spending a week on MokaKat in December, the time was finally here to fly to Florida and sail MokaKat to the Bahamas, where she would stay for the year.  I rounded up a few close friends to help me sail her across the gulf stream and enjoy some time in the Bahamas.  My mother, Audrey, also came with us, as she planned on boat sitting in the Bahamas, tough gig!

Unfortunately, we were on different airlines, but all arriving in West Palm Beach on the same day.   My mother was leaving from Dallas, and the rest of us from North West Arkansas.

Our flights were easy and after a short Uber ride, we arrived at MokaKat.  My mom came a few hours later, and the crew was complete and ready!

We had many tasks to be ready to travel to the Bahamas.  We had three days before we had to check out of the marina, and we were also looking for a weather window to cross the Gulf Stream to the Bahamas West End.

We organized our food lists and split up, Bubba and I headed to Sams Club, and Kathryn and Audrey(mom) headed to Walmart.  It was divide and conquer!!!  I also sent Kathryn on a little of a wild goose chase, as I didn't know if the propane bottles were completely filled or not.  So she caught an Uber to fill the tanks.  Turns out the tank were already full, and after $2.60 for propane and $20 Uber rides, we had the peace of mind that we would have coffee and cooking for the foreseeable future!  Thanks Kathryn!!!! 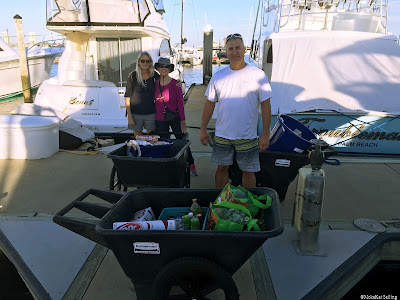 It also didn't help that West Palm had a record low that night, with 54 degrees.  We actually had to run the heat on the boat, as we were not prepared for such a cold night.

Of course our social butterfly Bubba had friends in West Palm Beach.  So we had dinner with Gizzi, who's name is actually Kristin...took me a while to get her name right!

MokaKat was ready for the crossing, but the captain was totally stressed.  The only time that I had taken the boat out of the marina was the quick motor to the anchorage.  I did spend a couple of hours with the boat in the harbor during the sea trial, but no blue water sailing.  I didn't know how the boat was going to perform and I really didn't know the boat that well.  Luckily, the boat was very similar to my original MokaKat, a 2009 Leopard L40.  I was still stressed and the butterflies were flying!

After a short sleep, we woke up at 3:00 am and made coffee, and got the boat ready to go.  It was anchor up at 4:00 am, and we were motoring out of the anchorage.  The large dock lights lit up the whole harbor, so getting through the other anchored boats and into the channel was very easy.  We headed out the pass with 5 knot east wind and very small swell.  The wind was to be on the nose the whole trip, so we would have to motor the whole 60 miles to the Bahamas West End.

The only casualty of the trip was the boat bucket. I was trying to get sea water to wash out the fish blood and the lost the bucket overboard.  It was floating, so Bubba turned around but we ran over the bucket.  we circled around again, but it was sinking fast.  I took off my shirt and shorts and dove into the cold 1000 foot water, but the bucket was already down below 30 feet.  Oh well, I believe we had a spare, but you know captains and their boat buckets....

After an easy 11 hour motor, the West End came into site!  It really had been a very easy crossing, even though we didn't get to sail.  MokaKat did perfectly and we burned about a quarter tank of diesel for each engine.

After tying up in the slip, we had the welcome committee local shark to check us out!  Yikes!  It was a very large bull shark swimming around our sugar scoops!  No swimming at the marina!!!

Bubba out did himself in finding a bucket of lobsters and conch salad from a local fisherman.  $5 lobster are hard to beat!!!
The Bahamian Officials are very proud of their paperwork!  After filling out several very long forms, it seemed multiple of times, I finally got our year cruising permit and visa stamps for everyone.  $300 for the cruising and fishing permits for 3 people, and an extra $20 for our fourth crew member!  They gave me extra forms, so that next time I can be more prepared.  They were extremely nice, just like all of the Bahamian people that we encountered on this trip.


In conclusion, we had an excellent experience crossing the gulf stream and motoring into the Bahamas.  We used the WindyTV app on the iPhone to make a decision on when to leave.  It seemed like a good tool for short term weather window decision.

Coming up next will be our Bahamas experience in Abaco!

Posted by Unknown at 1:11 PM No comments: