This morning started early, as seems the norm on a boat.  We get up at sunrise and go to bed around 9:00.  I had my coffee, and then I had to take the ASA103 exam.  It was another 100 question exam, just like ASA101.  I made a 90%, missing some stupid things, but at least I passed.  What a way to start the day!  So I am half way there on my goal of ASA101, 103, 104, and 114.  Just two more tests and several more days of training!  To celebrate and take a break from studying, I took the dinghy and the crew from Andato, including Nancy, to a small island, close to where we anchored, that is protected for the turtles.  It has buoys around a swimming area, and dinghies can only go through a special channel to beach their boats.  There were several other boats there, with people from France and other countries to see the turtles.  We snorkeled for about an hour and saw many turtles.  They are usually in the grassy areas, either eating or hanging out.  They are always so cool to see.  We also hiked to the top of the little island, and saw a couple of iguanas and a beautiful view.
After our snorkeling, we then prepared to sail, raising the anchor, and motoring out of the Marine Park.  It was sad to leave so quickly, as I could have spent several days exploring the islands and reefs there.  This would be a top place to come back to, when I charter.  After heading back to sea, we practised MOB (Man Overboard) drills.  We used the figure 8 method, which entails a couple of tacks to come back to the person in the water.  We tried to volunteer Sadeem to be the MOB, but for some reason he declined.  We used a couple of boat bumpers for the drill.  I think that we did the drill about 10 times, between the two of us, so we were pretty tired of many tacks and sail trimming that we did.  It was really much easier than I thought, and it was just a matter of timing to bring the cat back into the wind at the right moment to stop at the bumpers.  Most of the time, we brought the bumpers down the port side of the boat, but a couple of times we brought the bumpers through the middle of the hulls of the cat.  This was hard for the person with the boat hook, as you lost sight of the bumpers, and then the suddenly came out between the hulls.  I prefer bringing the MOB down the port side, which could be the starboard side, depending on what direction you were traveling and the wind direction.  We were ready for a break, so Tony brought the boat into a 'hove to', where you allow the jib to fall over to the other side, but you don't release the ropes.  You also turn the wheel, into the wind (I think).  This makes the boat just sit still, as the wind action is countered by the sail and rudder, keeping the boat very stable and stopped.  We were out in the middle of the channels, in fairly busy seas, and the boat was very flat and comfortable.  We then made some sandwiches and ate lunch, without having to take the sails in!
Since the water was so rough at Clifton, we headed over to the west side of the island to a large bay that only had a few shacks on shore.  There was a reminder of the nature of the sea, as there was a wreck of a catamaran on the shore.  Tony said that it had broke free of it's mooring during a storm and broke apart on the rocky shore.  We didn't go too close, so my pictures of it were small.  We ate chicken spaghetti and drank a bottle of red wine that I picked up while in town.﻿  Andato anchored next to us, but we were too tired for company.  Another excellent day! 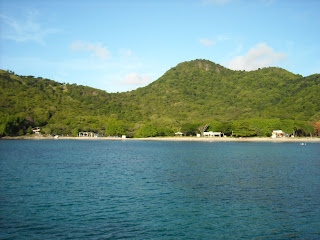 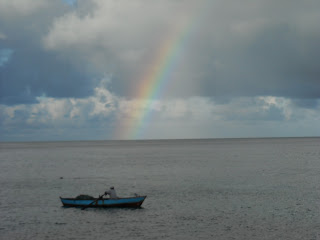 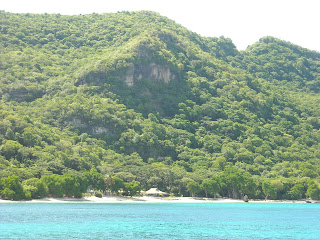 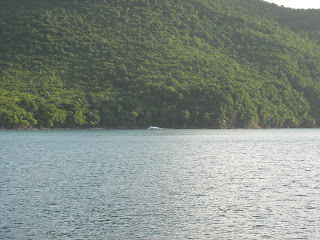