It was a month or so ago with I received a comment on our blog from Nick and Silke, that they were going to be the new caretakers for the Steppingstones Resort.  They had their own blog www.jagerfoods.com, and had a similar passion for adventure.  We hoped that we could match up our schedule and meet them one day.  We had really enjoyed our time with Phil and Julie, who were the prior caretakers, and went with us to Guatemala last fall.
After some email coordinating, we decided that we would sail  down to Monkey Cay, and meet Nick and Silke, and finalize our plans.
Mom and I had an easy three hour sail down to Monkey Cay.  This was the place where we struggled trying to grab a mooring ball, back in September last year, when we picked up Phil and Julie.  We determined that if the mooring balls were in the same shape, we would just anchor.  As expected, the mooring balls did not have any new banners on them, so we anchored close to the mangroves on the leeward side of the shore.  There was another boat already anchored there, so we gave them plenty of space.  It was nice to be in calm water, as the Placencia Harbor had become very rolly.  We decided that we would spend the night here and go meet Nick and Silke the next morning.  We enjoyed the quiet water and had a nice evening. 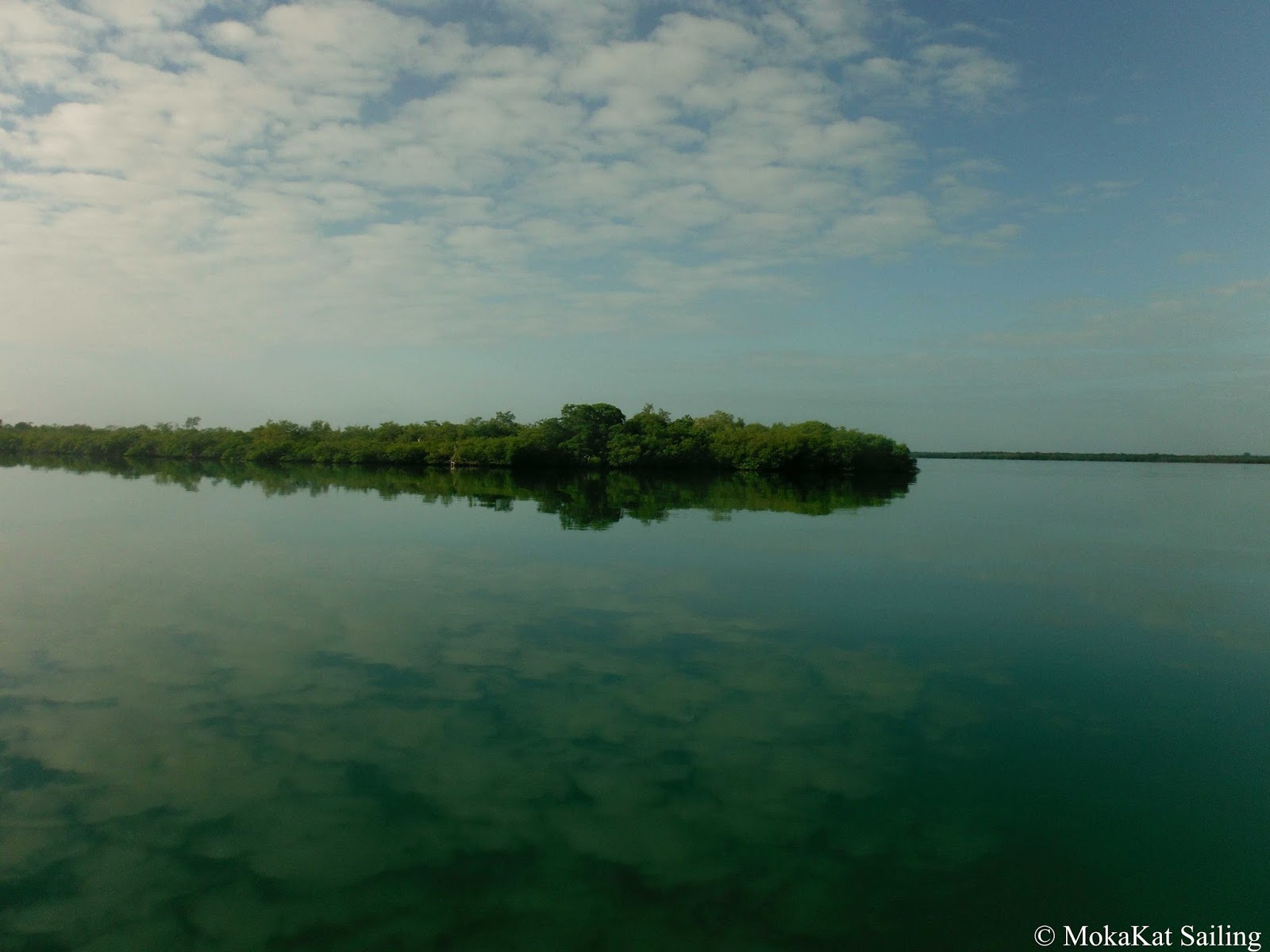 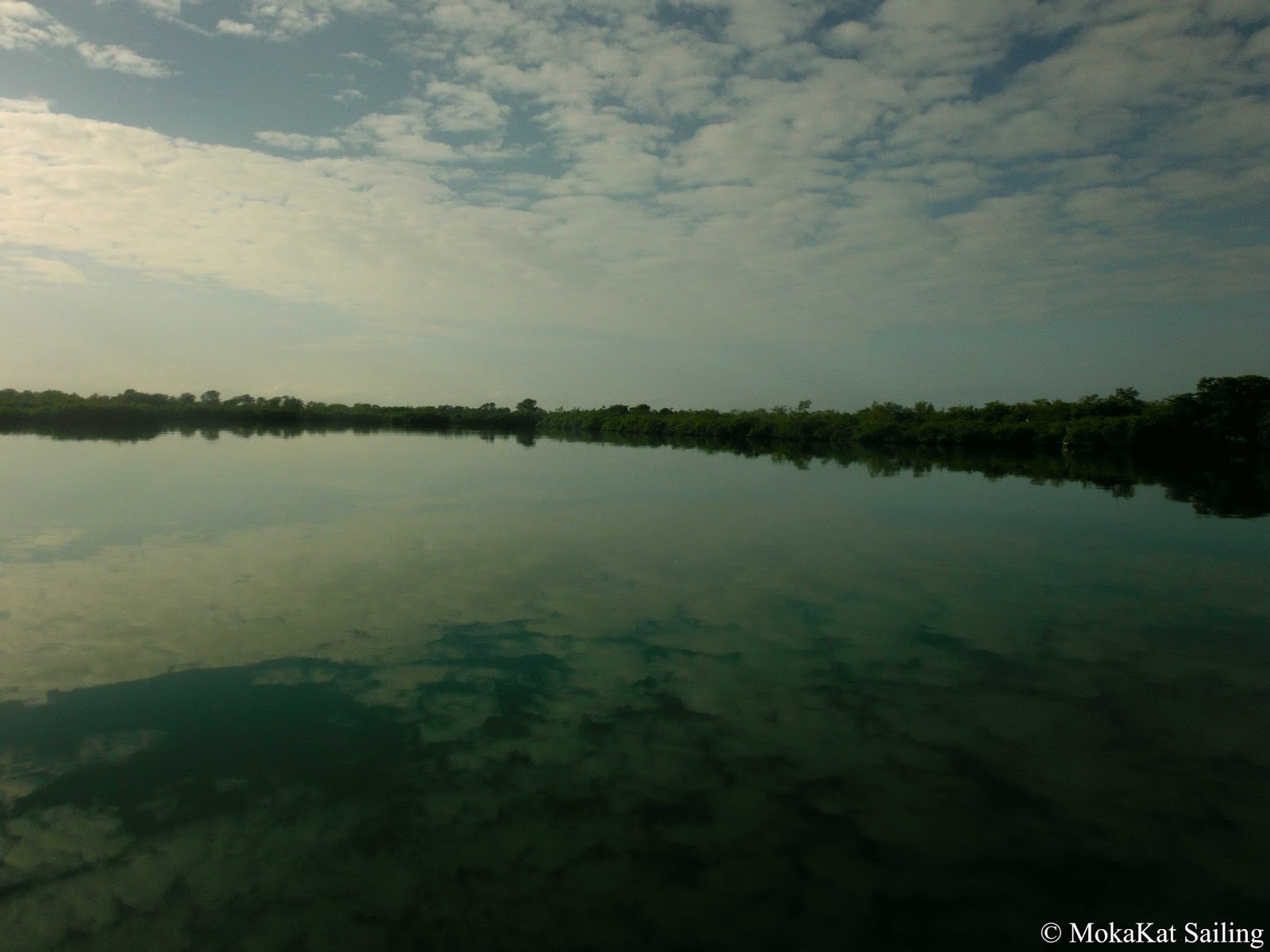 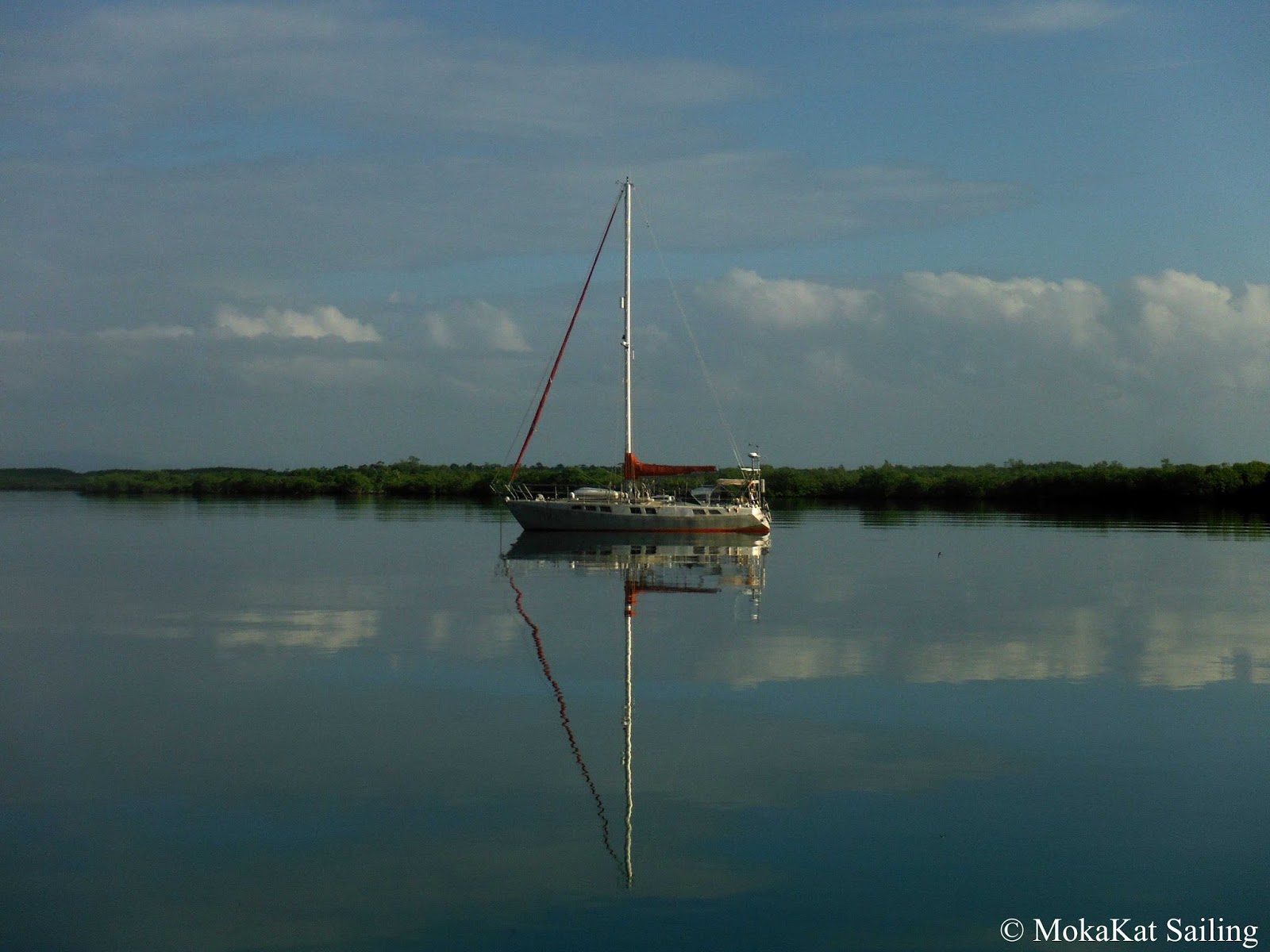 s/v TIKA
The  next morning, as we were heading to Steppingstones Resort, we stopped by the other boat anchored next to us, s/v TIKA.  They were just coming up from Rio Dulce, and were from Germany.  It was a small world, as they new many of our friends in Rio Dulce.
We then headed over to Steppingstones Resort, dodging the coral heads and shallow water.  We arrive at the Resort to the barking dogs and Nick and Silke!  It was nice to finally meet them, and we had to pose for some pictures and we headed up stairs for a quick lunch.  It turns out that Silke is originally from Germany, and Nick is from Minnesota!  They have been living in the US, before coming to Belize. 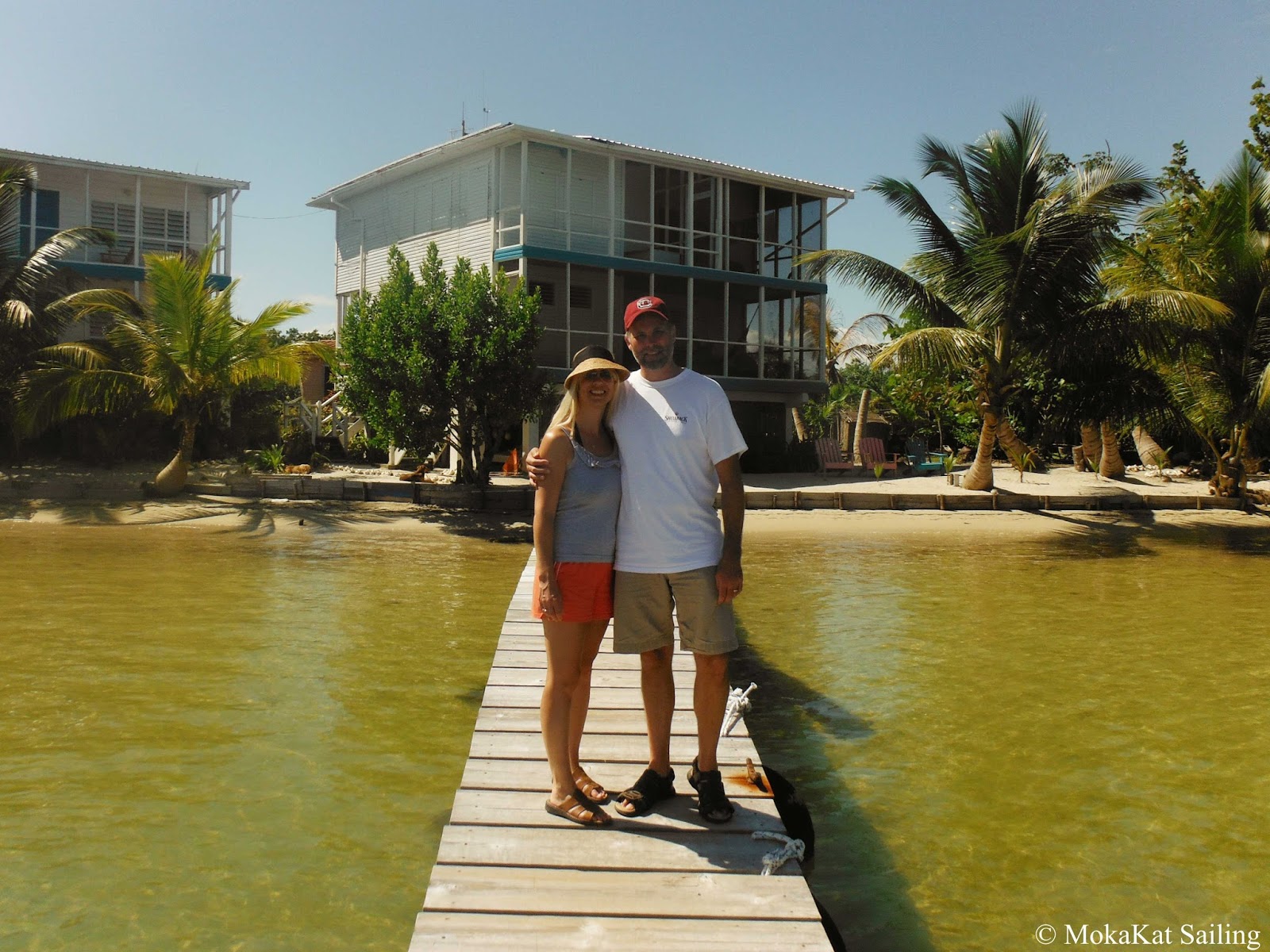 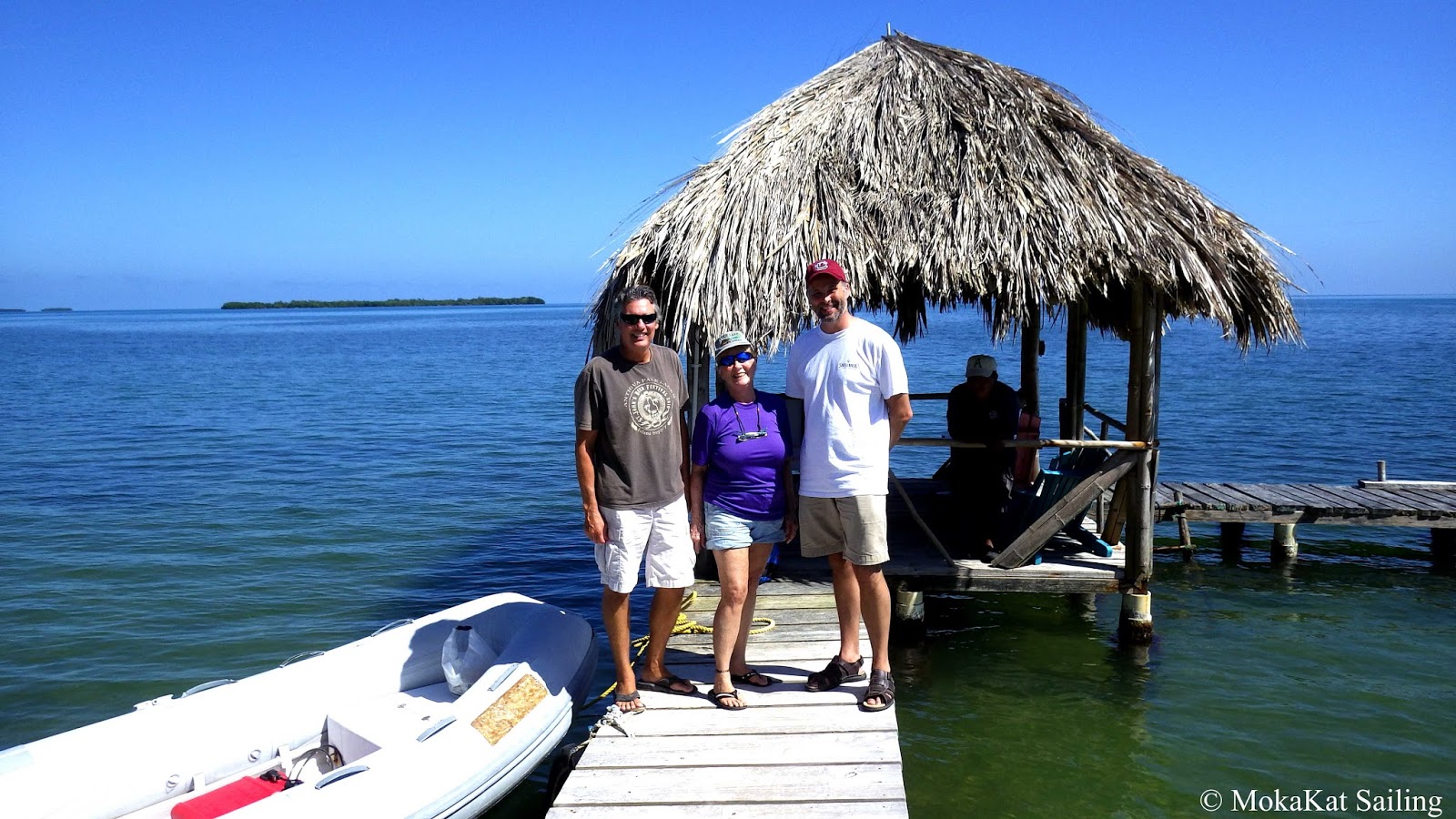 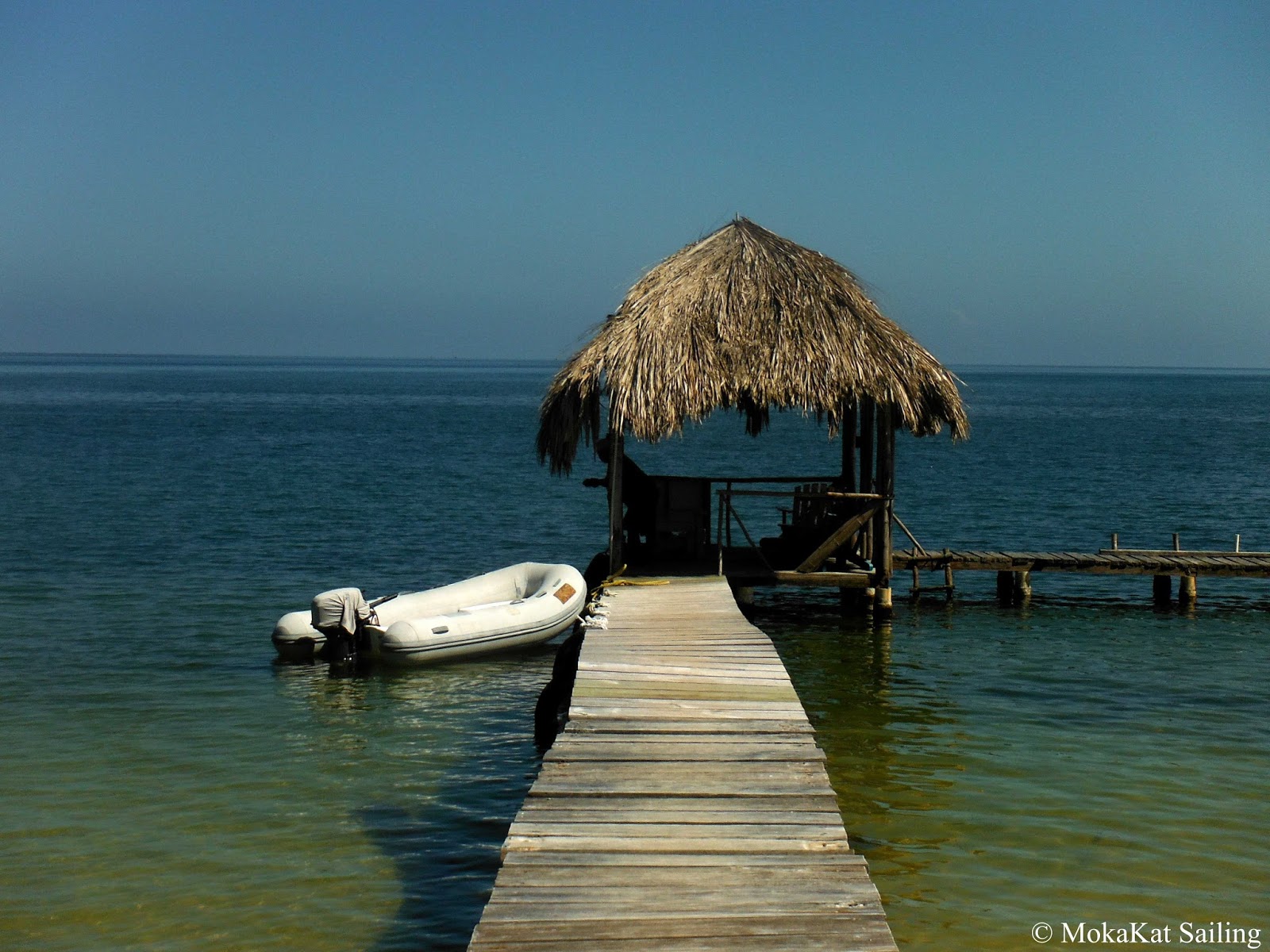 I was also happy that the dogs remembered me and both of them came running up!  The female was a little apprehensive, but finally came over for some scratching!  I am sure that Phil and Julie miss these two dogs a lot! 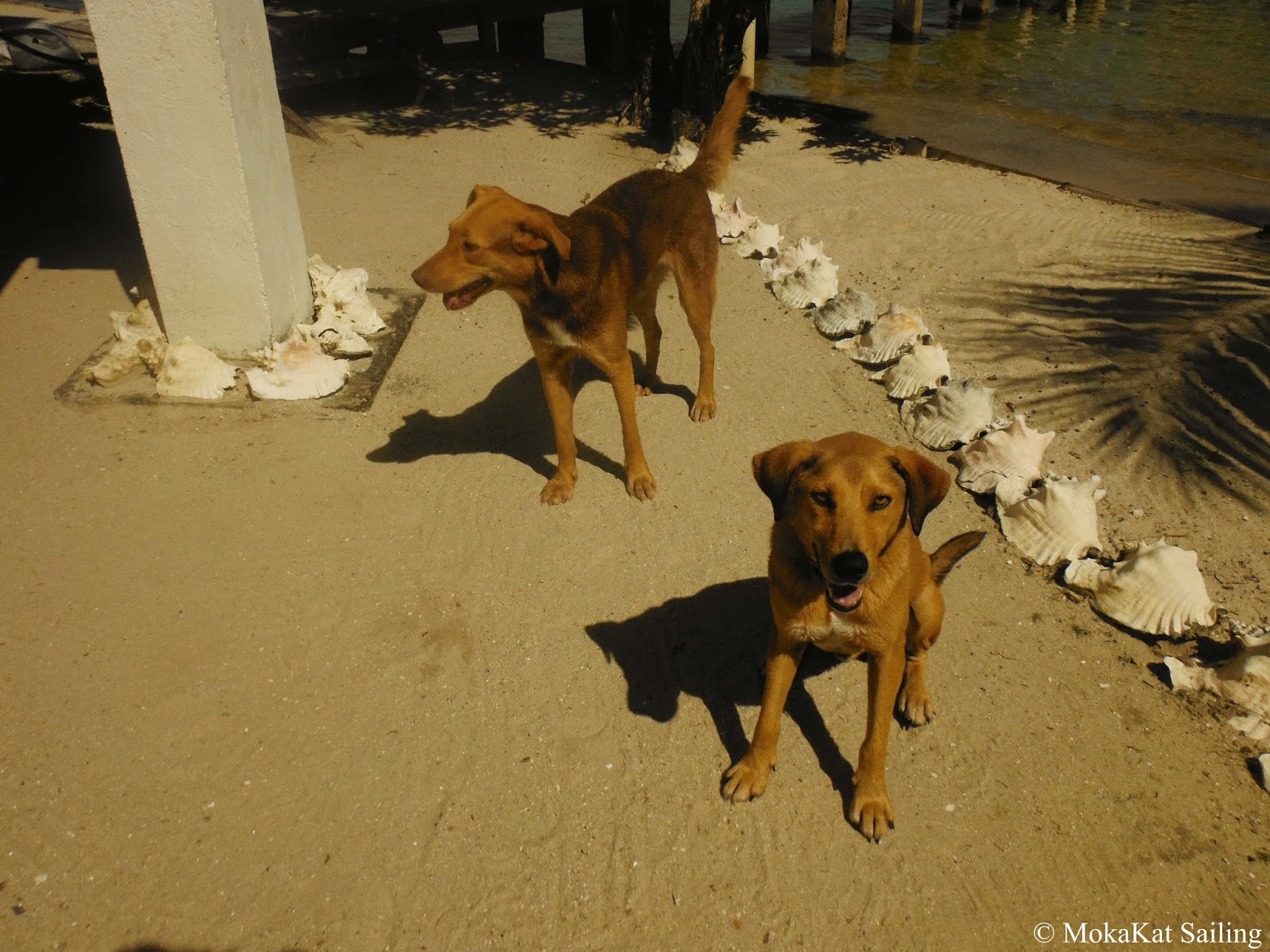 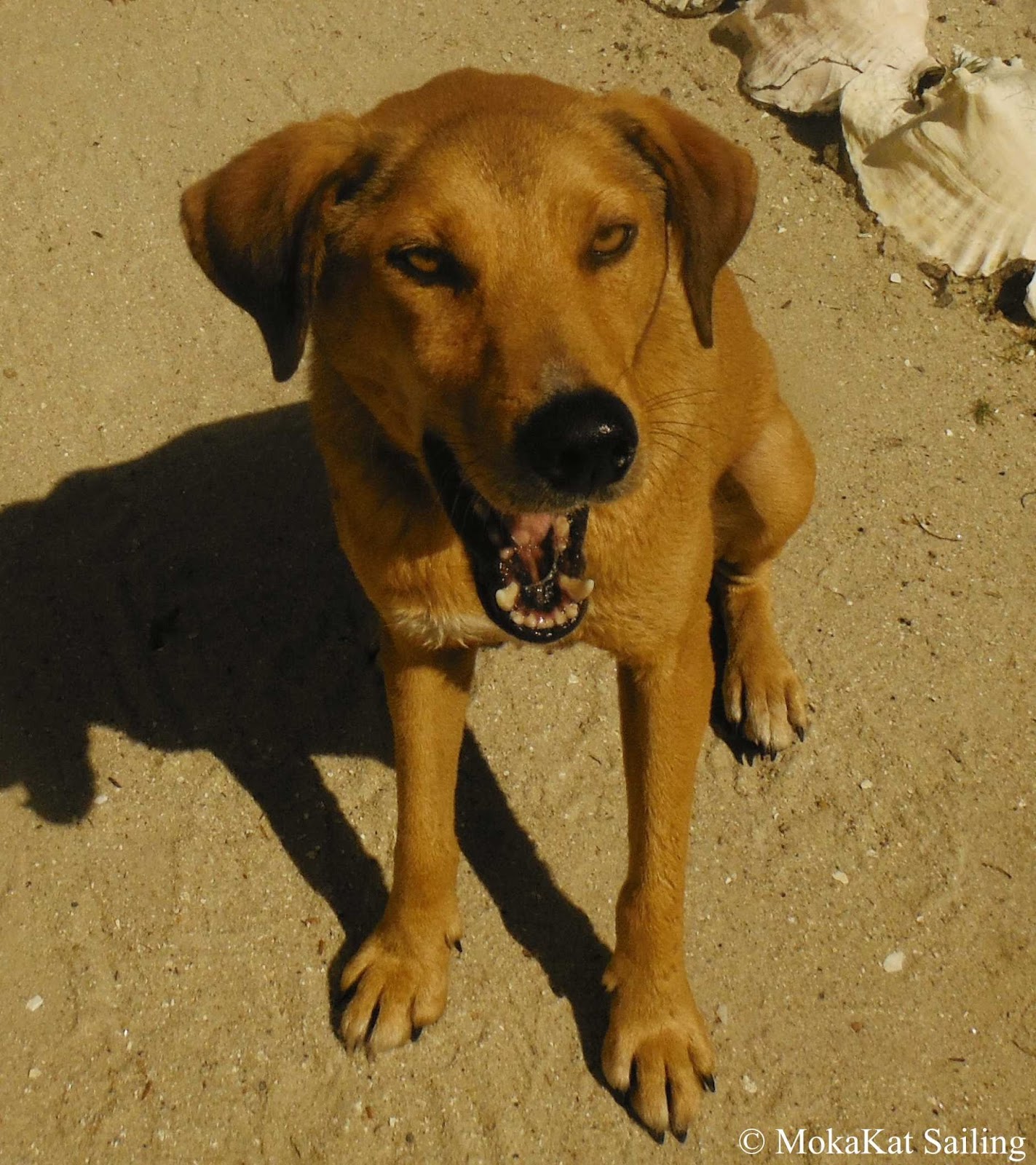 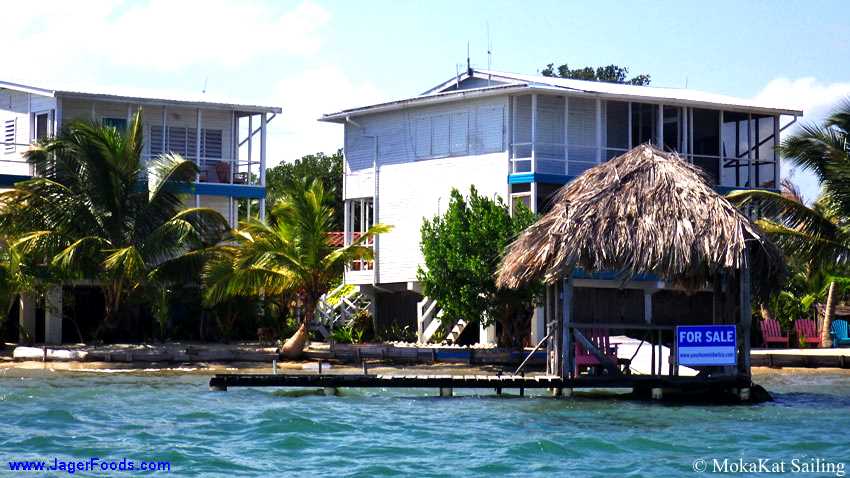 After a quick lunch, our plan was settled!  It turns out that neither Nick or Silke had been on a catamaran before, so this was a first.  We decided that we would spend the night, anchored in the calm water of the Monkey Cay, and would sail to Placencia the next day and watch the Super Bowl at the Paradise Resort.  So off to the boat we went!
Mom ended up cooking her famous Pork Chops smothered with onions, peppers and a tomato sauce.  We opened a bottle of red wine, and had a great dinner! 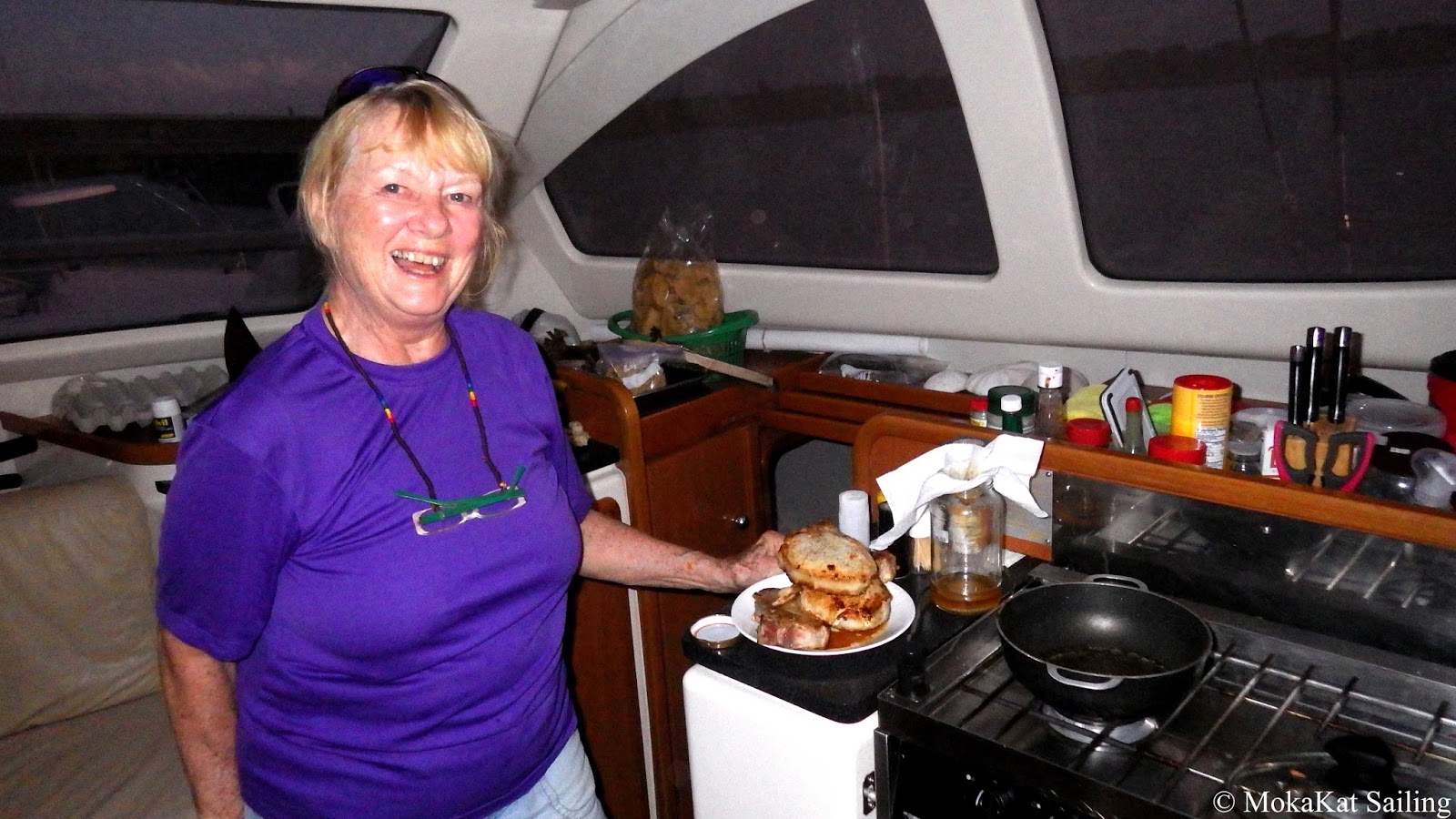 Mom, with a plate of her famous smothered port chops
The next morning, after coffee and some light breakfast, we headed to Placencia.  Both Nick and Silke jumped right in, and helped with the raising the anchor, and later raising the sails.  It was nice to have extra hands on the boat!  We had a nice south east breeze so we quickly headed north toward Placencia. 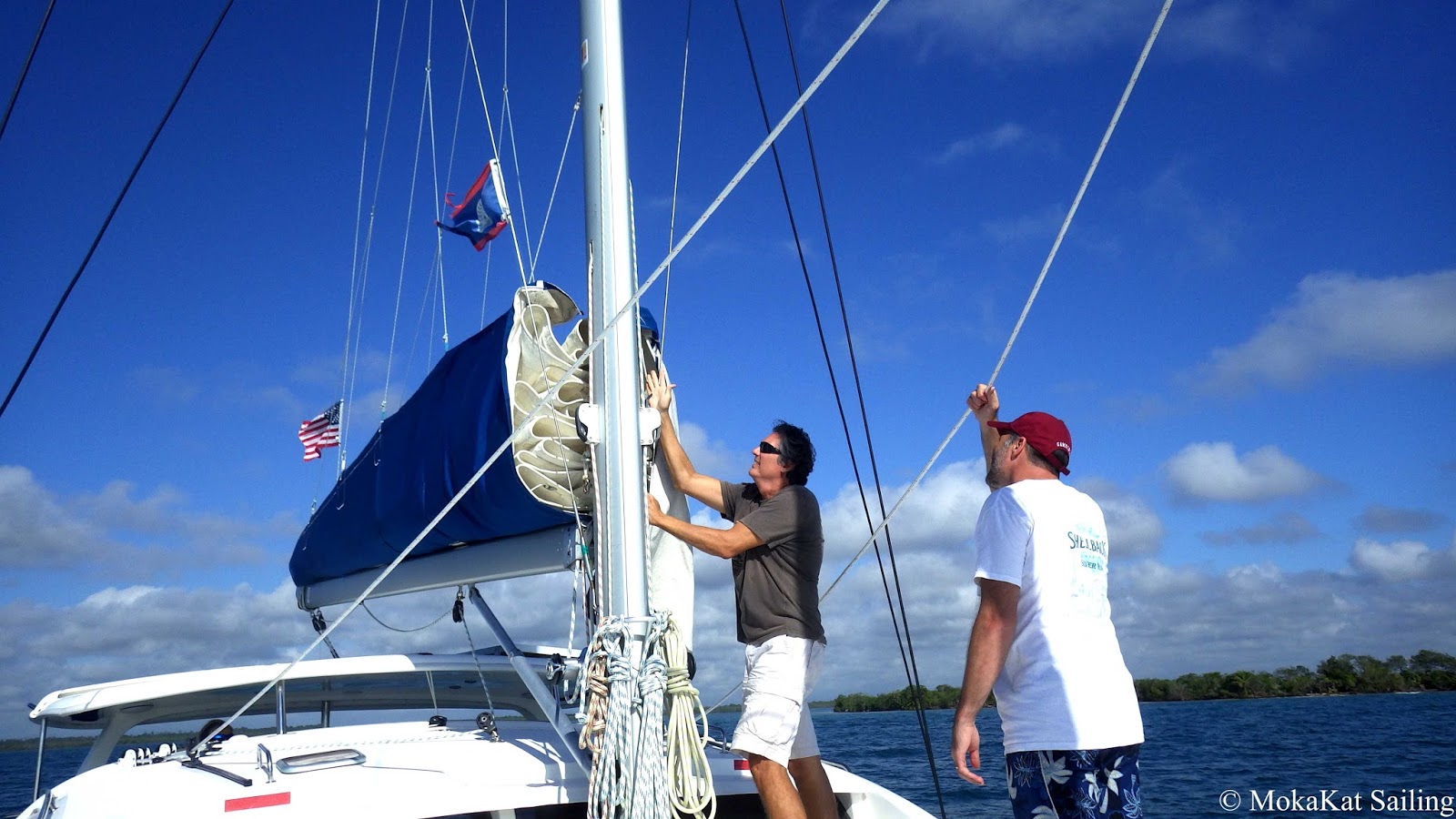 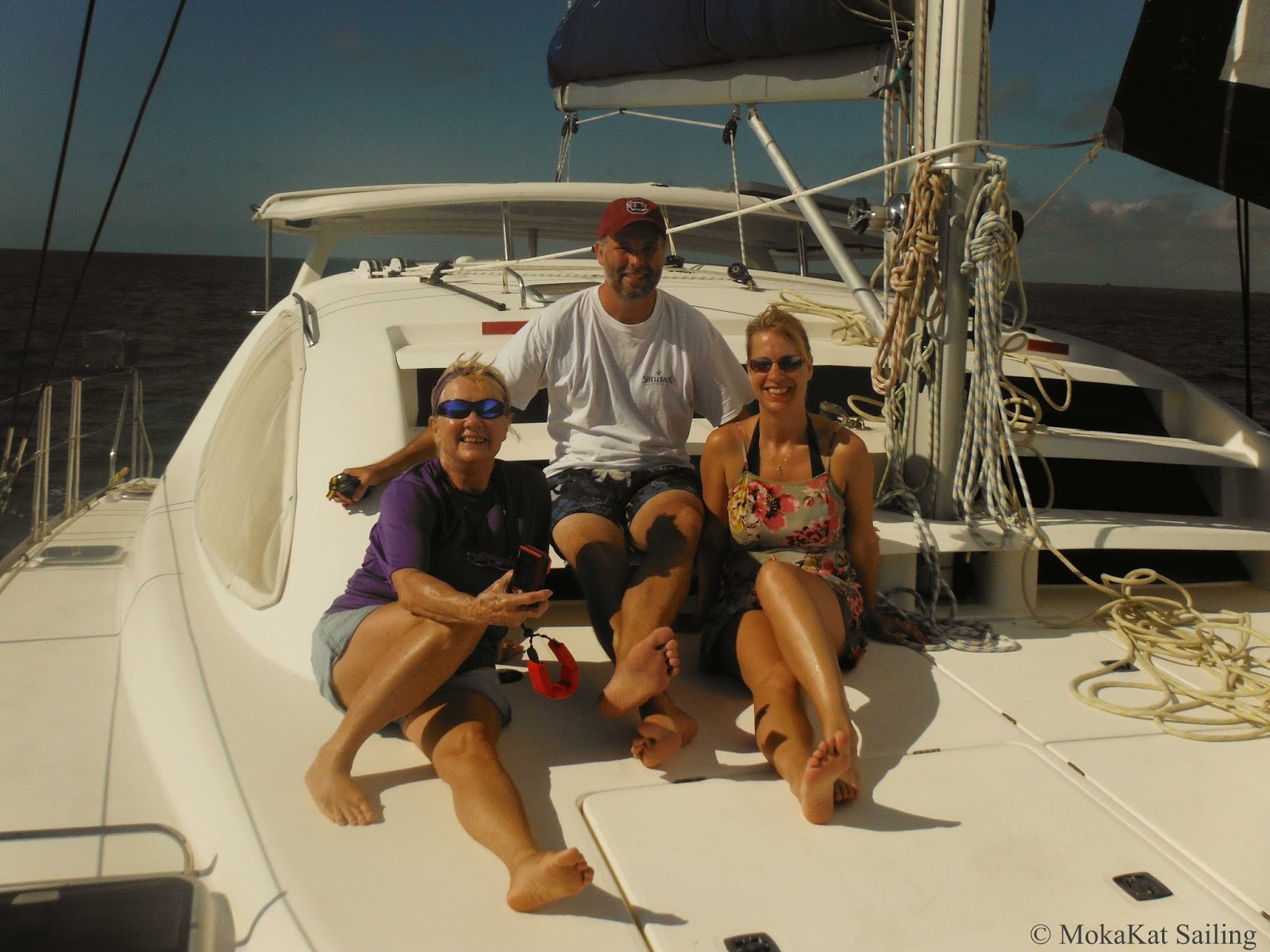 The happy crew!
We had also put out the fishing pole, hoping for some fresh fish.  It wasn't very long, and the fishing line started screaming!  Nick, quick, grab the pole!  Nick ran over and grabbed the rod, while I tried to slow down the boat.  I finally turned the boat into the wind, slowing it down, while Nick was trying to slow down the fish from taking all of the fishing line out!  After a long fight, Nick finally reeled in our first grouper!  It was very beautiful, and an excellent eating fish! 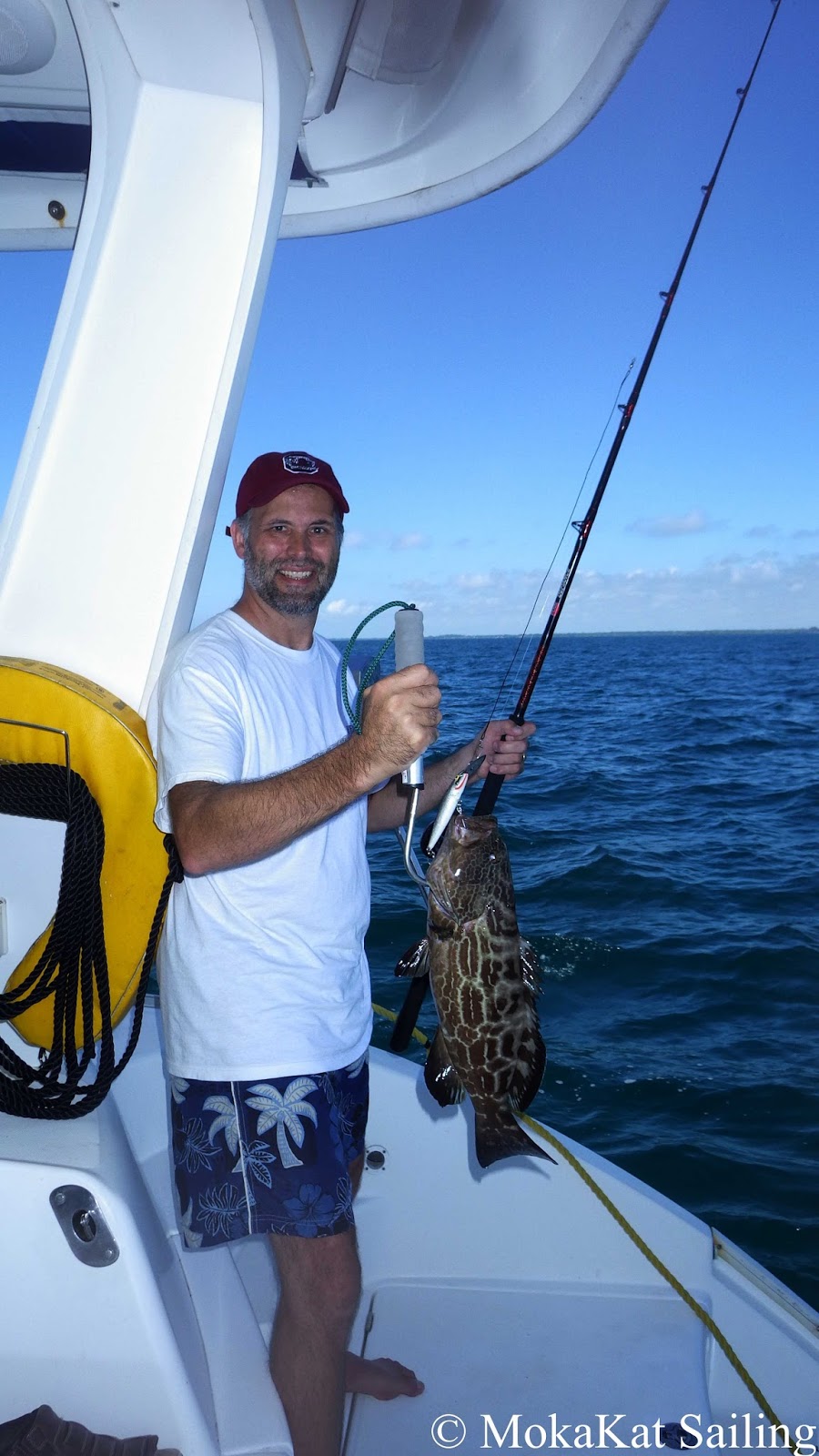 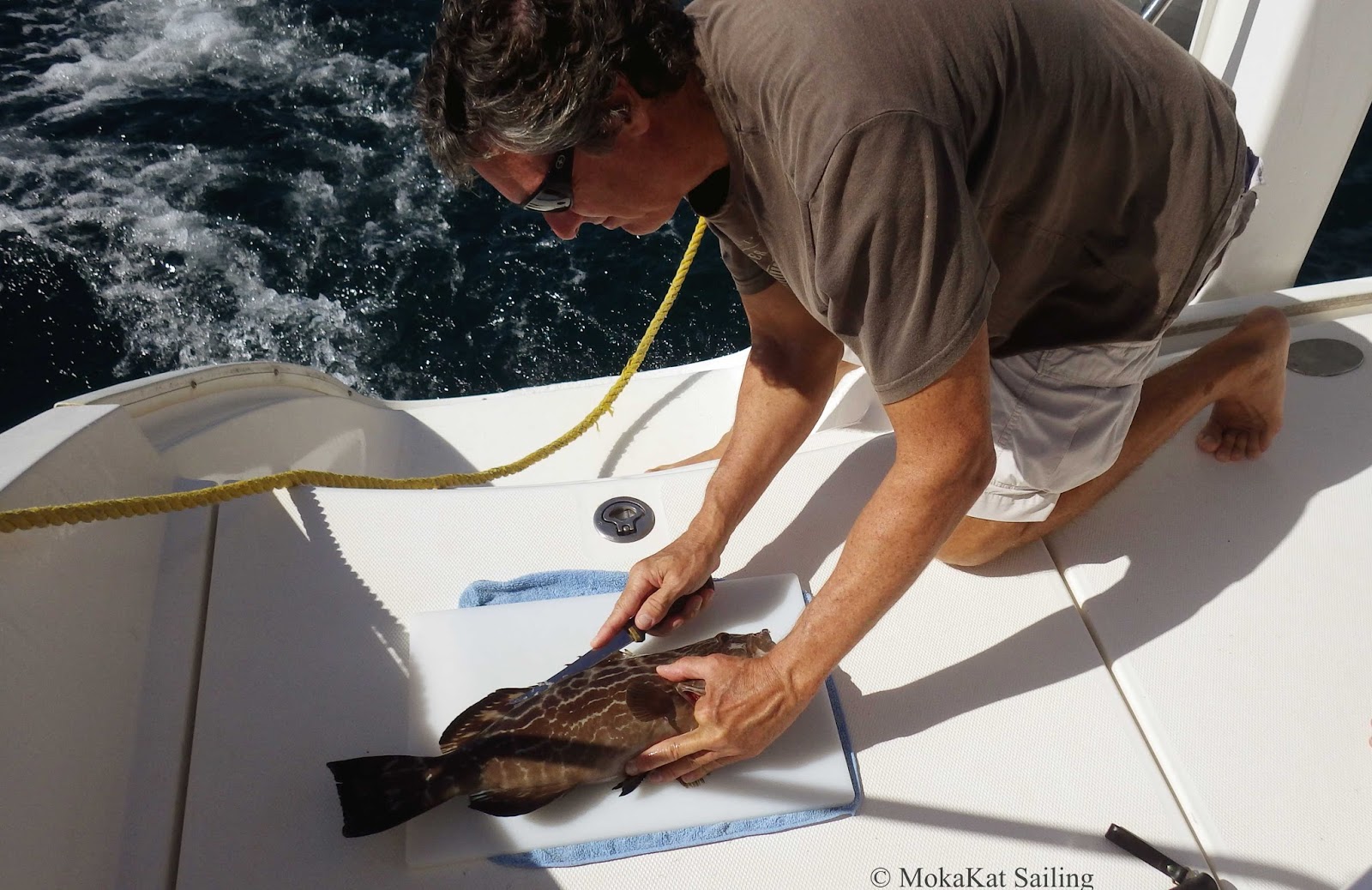 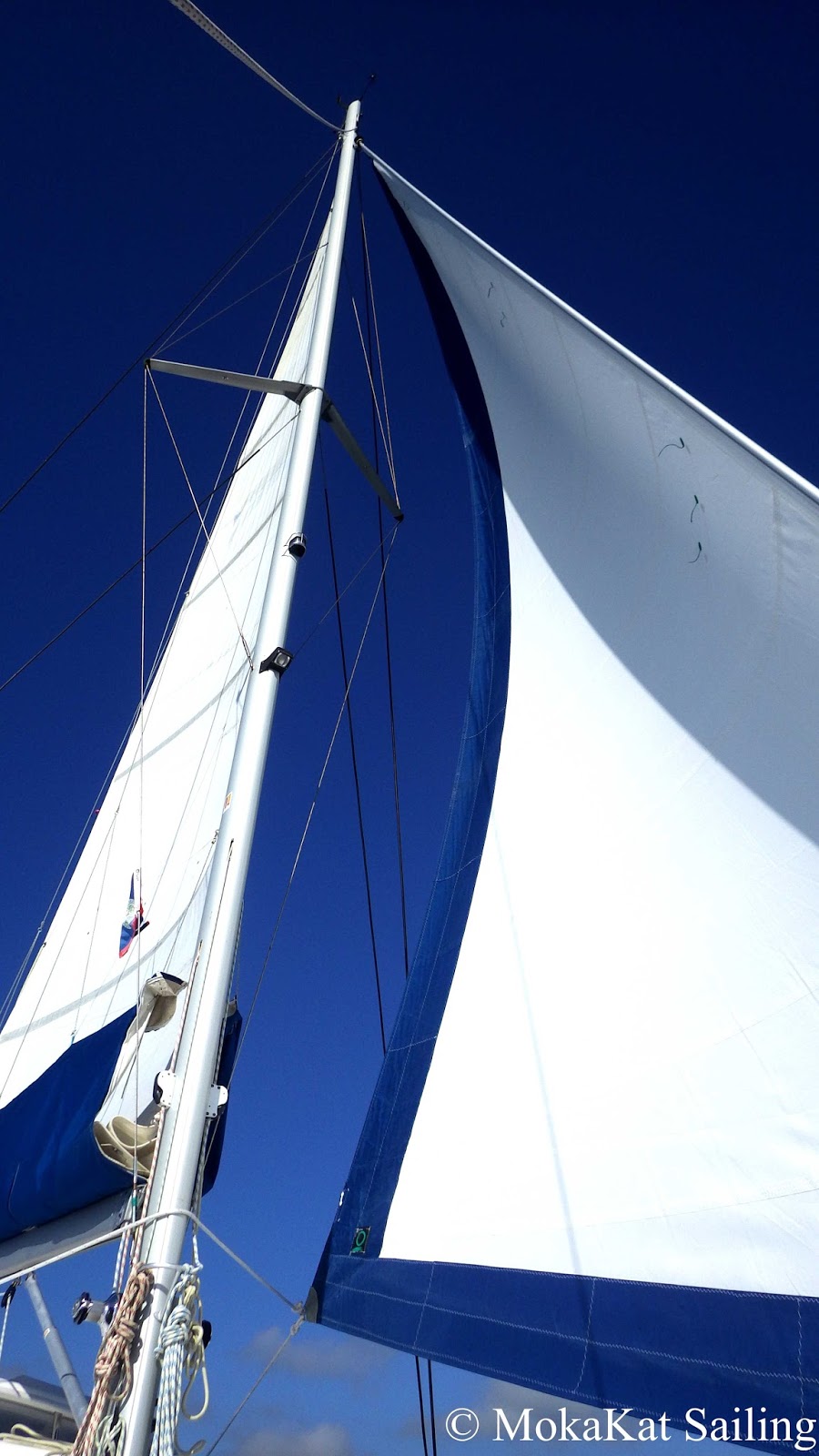 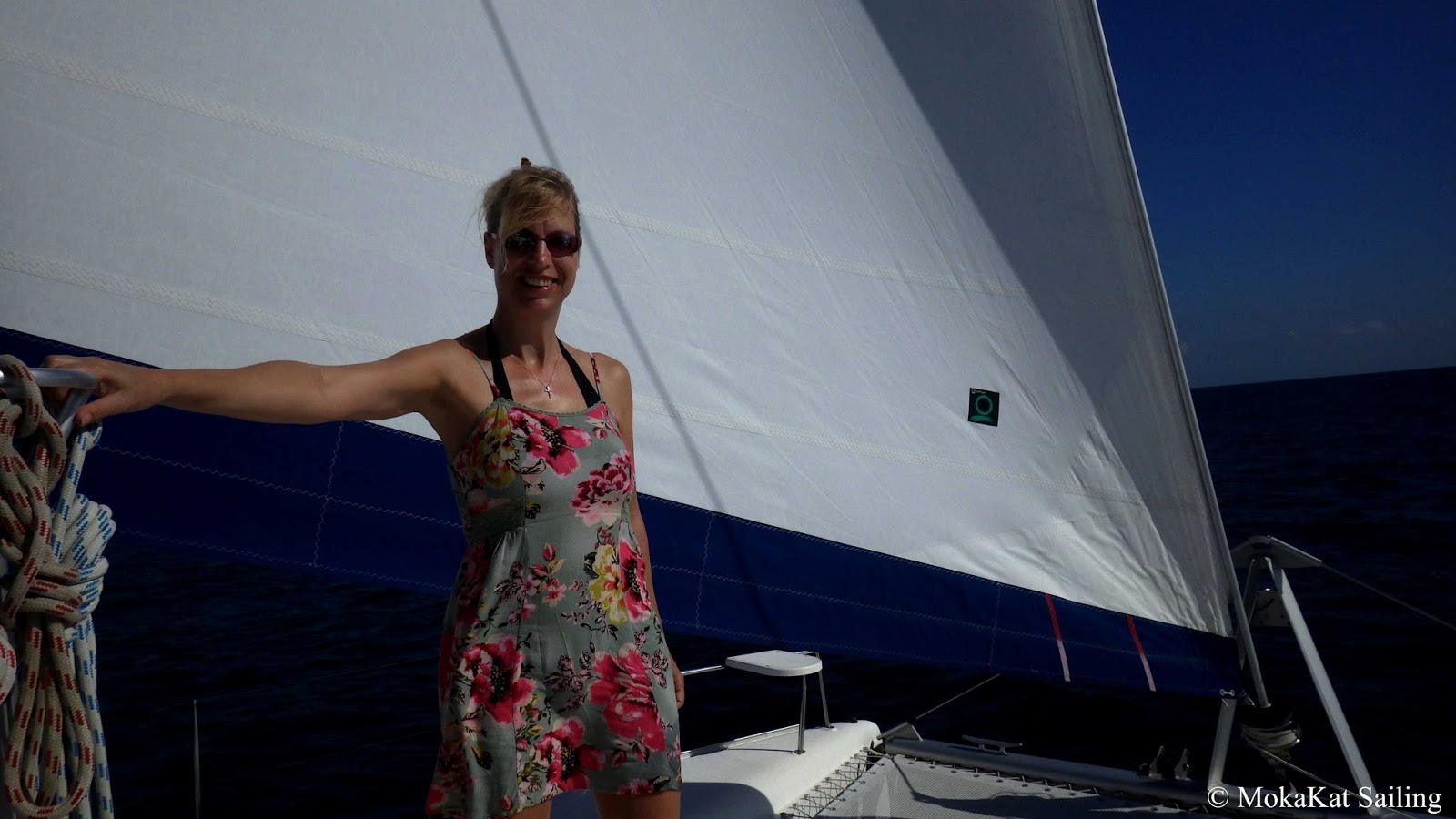 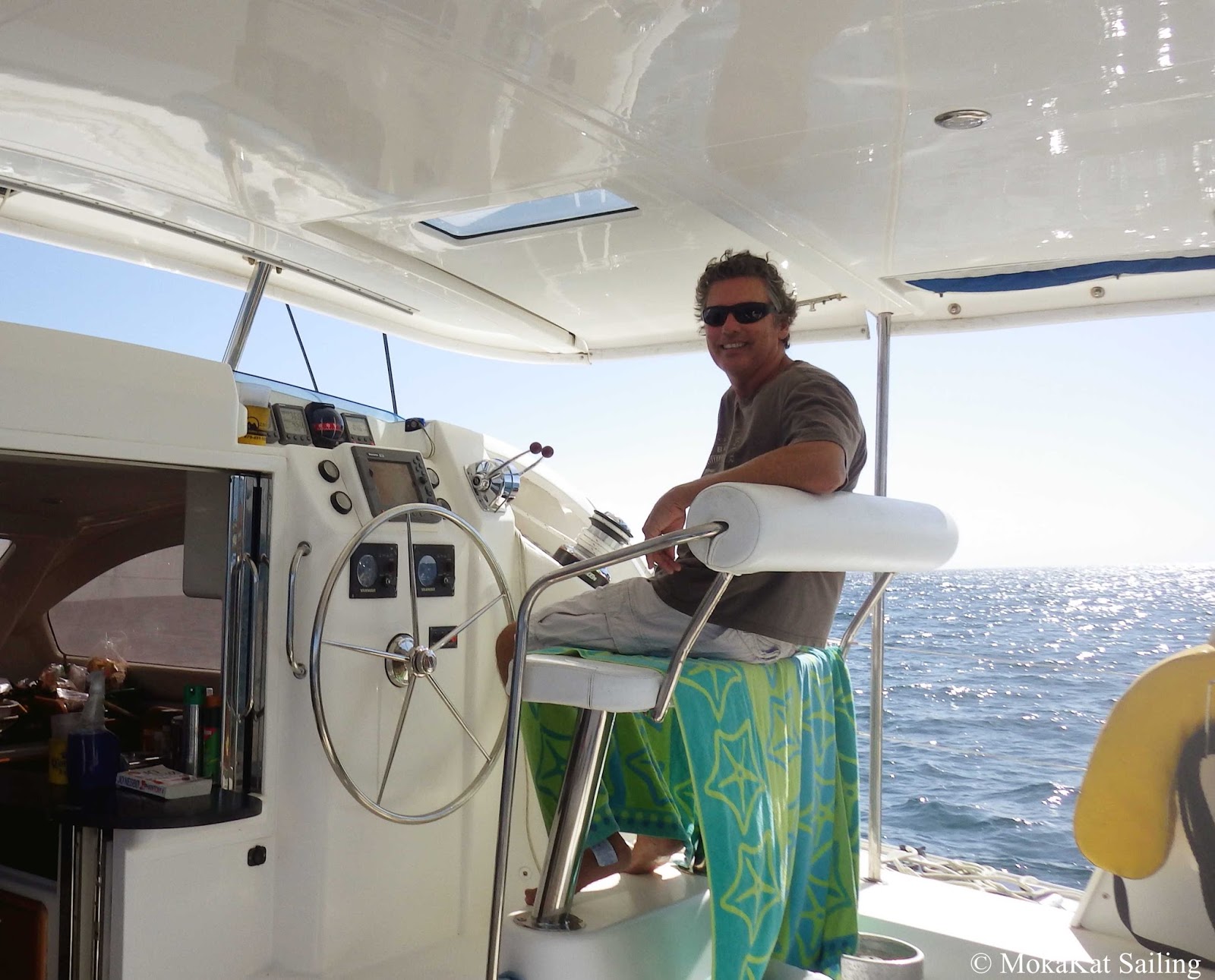 We had a very enjoyable sail to Placencia.  We were just a few miles south when the fishing line started to sing again!  Fish on!!  There is always a fire drill when a fish hits, as someone has to grab the pole and I need to slow the boat down!  Once the boat was slowed down, I took over the pole and started to fight the fish.  It was crazy, as the fish was swimming toward the boat, so I reeled in as fast as I could to catch up!  Finally when the fish got closer to the boat it started to run the other way!  I handed the pole back to Nick, so that I could make sure that the boat was in control.  It then took another 15 minutes to finally get the fish in, as it fought really hard.  It turned out to be our fist Wahoo! 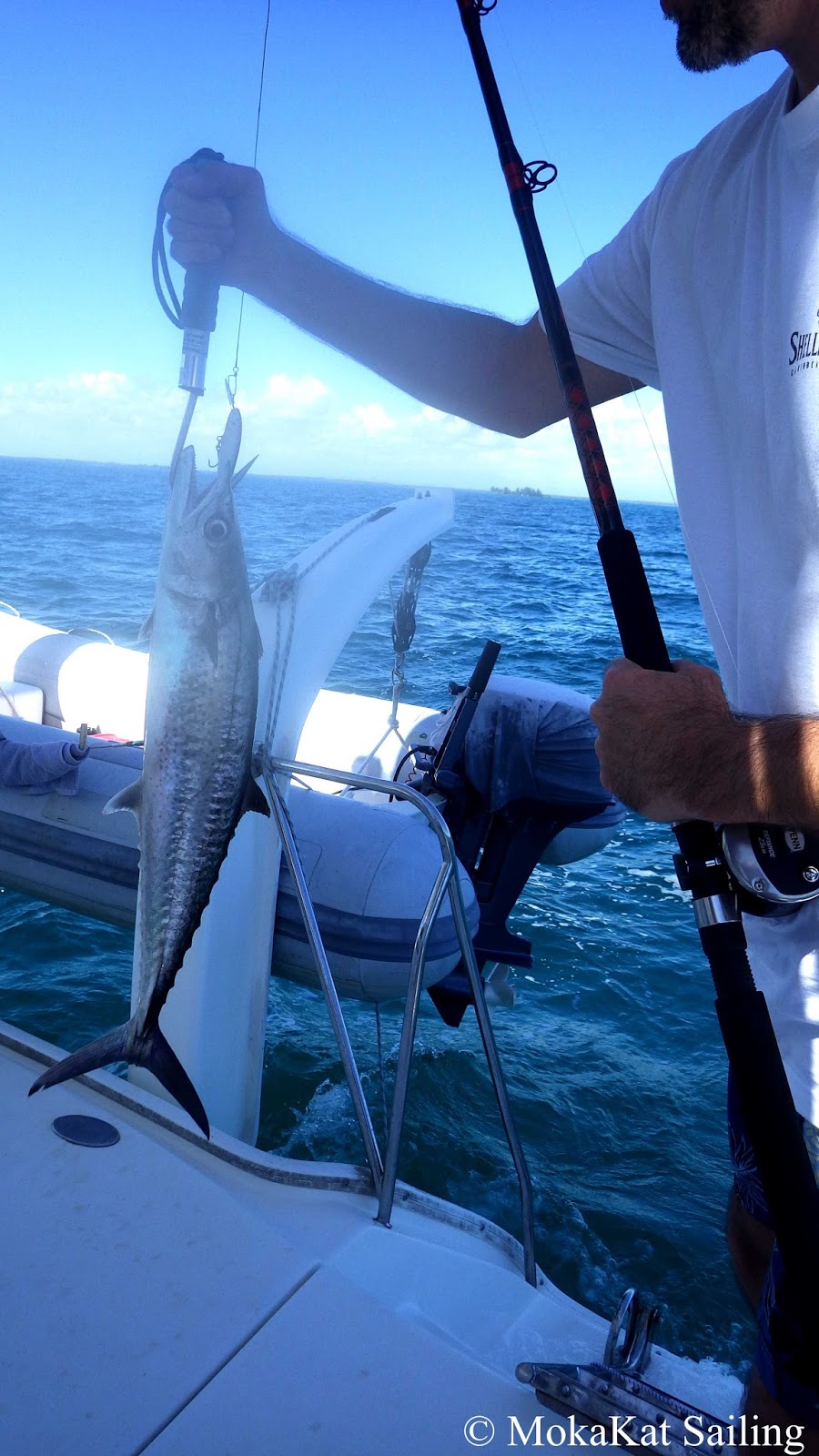 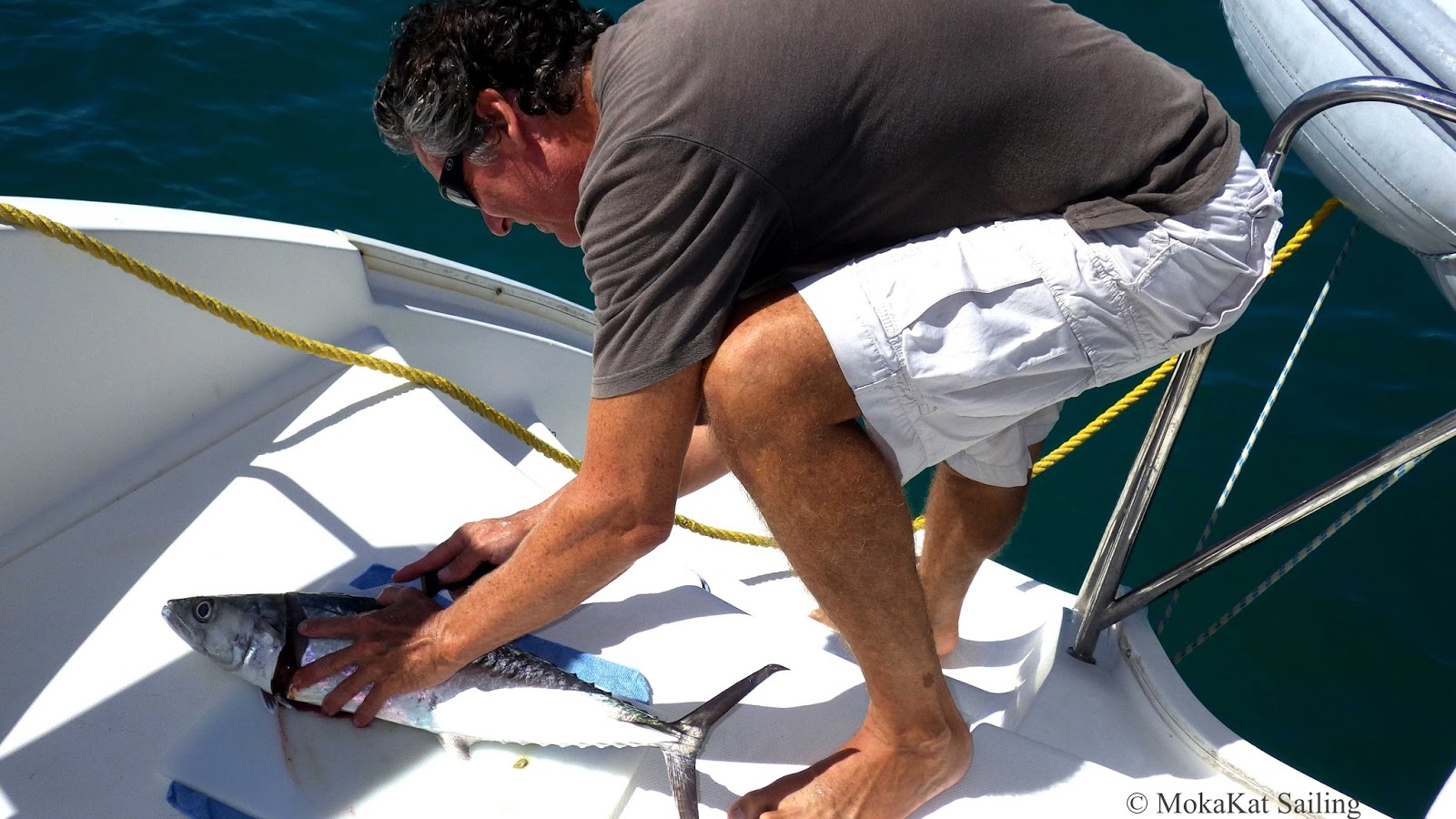 We arrived in Placencia Harbor, and anchored the boat.  We enjoyed a swim and then headed into town for some shopping.  We were able to buy some needed vegetables, chicken, and drinks.  Then Nick, Silke, and I headed over to the Paradise Resort to watch the Super Bowl.  The game turned out to be a one sided affair, and Denver lost.  We enjoyed talking to some of the cruisers and met a family, Brian, Anna, and their 15 year old son, that were sailing around the world.  They started in Florida, and were heading down to Panama, so they are just getting started.  They were sailing an older Privilege catamaran, s/v Stray Cat, which they have upgraded.  Their blog is www.4strangebyrds.com, if you want to follow their adventure.

We then headed back to where we had tied up the dinghy, and discovered that the cable and lock had slid down the pole on the dock and was sitting on the bottom!  We tried everything to pull up the cable, but it looked like someone was going to get wet!  Well, the buck stops with the captain, so I took off my shirt, and jumped in.  Luckily, the water was only about three feet deep, so I was able to use my foot to drag the lock up enough to grab.  Nothing like returning back to the boat with wet clothes!

The rest of the night was uneventful, and we enjoyed another night on MokaKat!  Tomorrow we plan on heading out to one of the cays!

Happy Sailing from MokaKat!
Posted by Unknown at 3:48 PM