We arrived in Isla Mujeres during Semana Santa (Holy Week) and Easter weekend.  We were concerned that we would not be able to check into Mexico until the following Monday.   Kathi and I headed into a couple of marinas to see if we could check in.  At the first marina, which will remain nameless, we talked to the owner.  He said that the government was shut down on Friday and it would be Saturday before we could check in.  Well we heard different from some other cruisers, so we headed over to see Julio at el Milagro Marina!  Julio took care of us and it wasn't too long and we had our immigration stamps and boat papers in the works.  We did have to pay double for the Port Captain’s fees, but $30 vs $60 wasn't breaking the bank, so we were happy to get checked in. 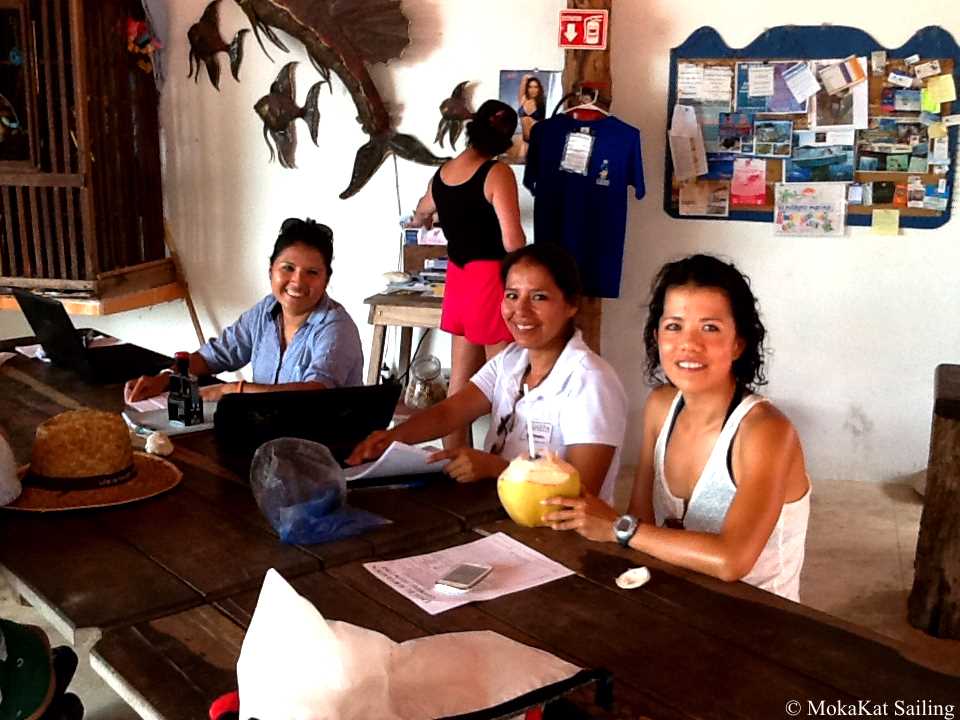 Customs, Immigration, and Health Officials
The three ladies that came to our boat represented Customs, Immigration, and Health.  They were heading to the local beach before they found out that they were needed, so they were a little casual, with their bikinis under shorts and t-shirts!  Their casual attire still didn't keep them from confiscating a flat of eggs and all of our Belize fruit.  They looked into our freezer, but didn't ask any questions.  We were happy we got to keep our conch and fish from Belize!

We were then free to explore the island, so Kathi, Mom, and I headed into town. 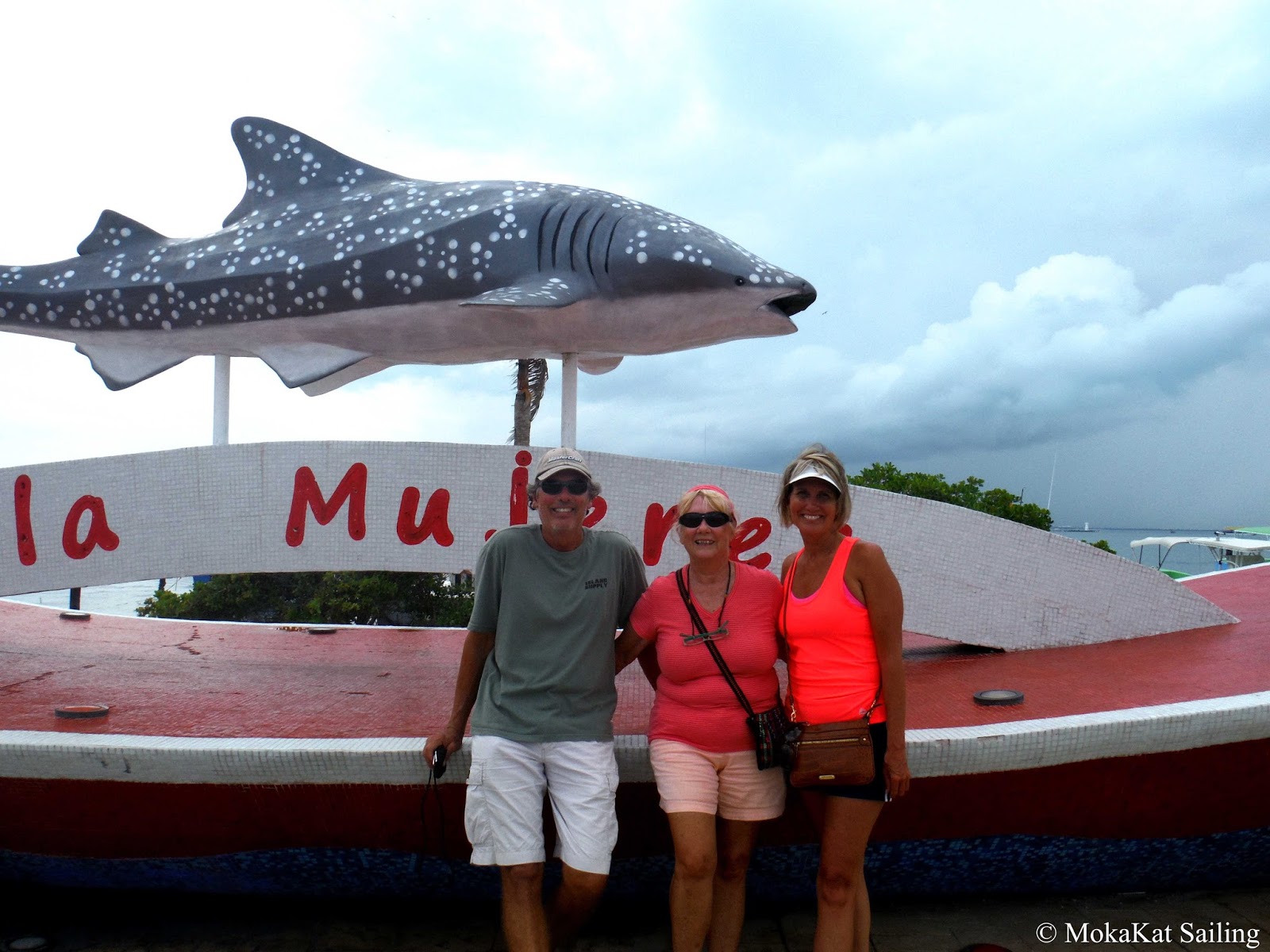 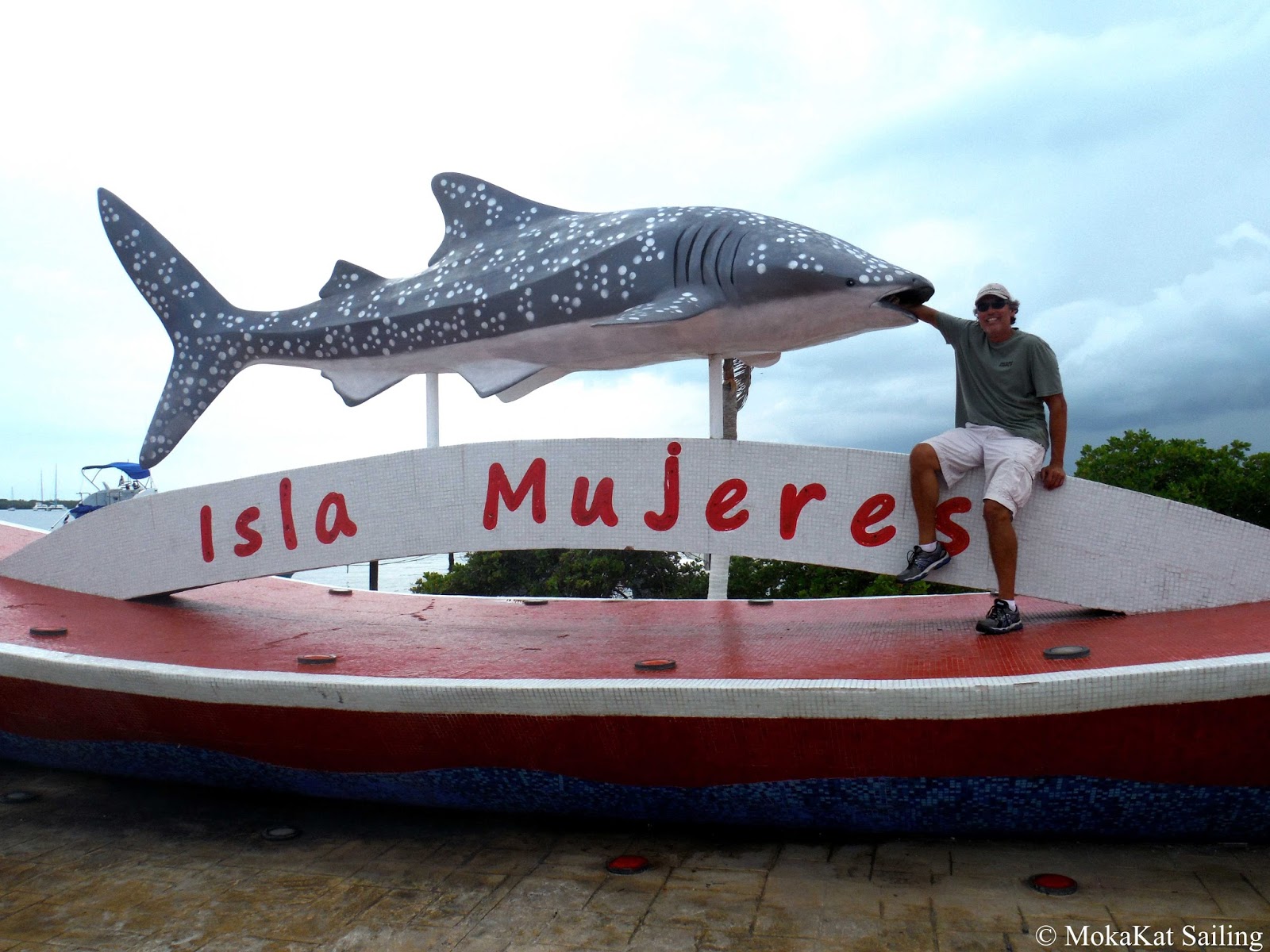 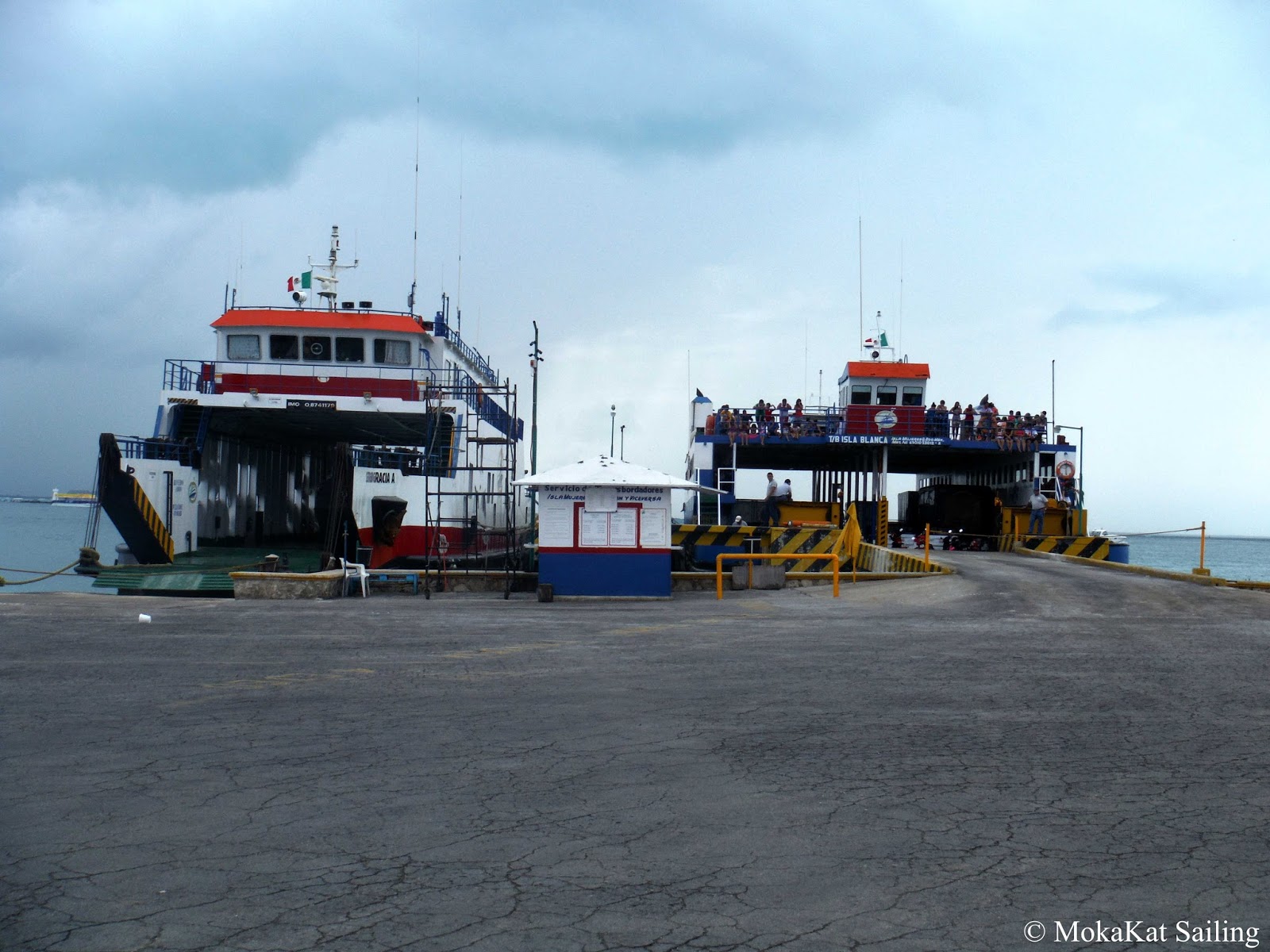 
We enjoyed the mile hike along the harbor and took a few pictures!  Bienvenidos a Isla Mujeres!!! 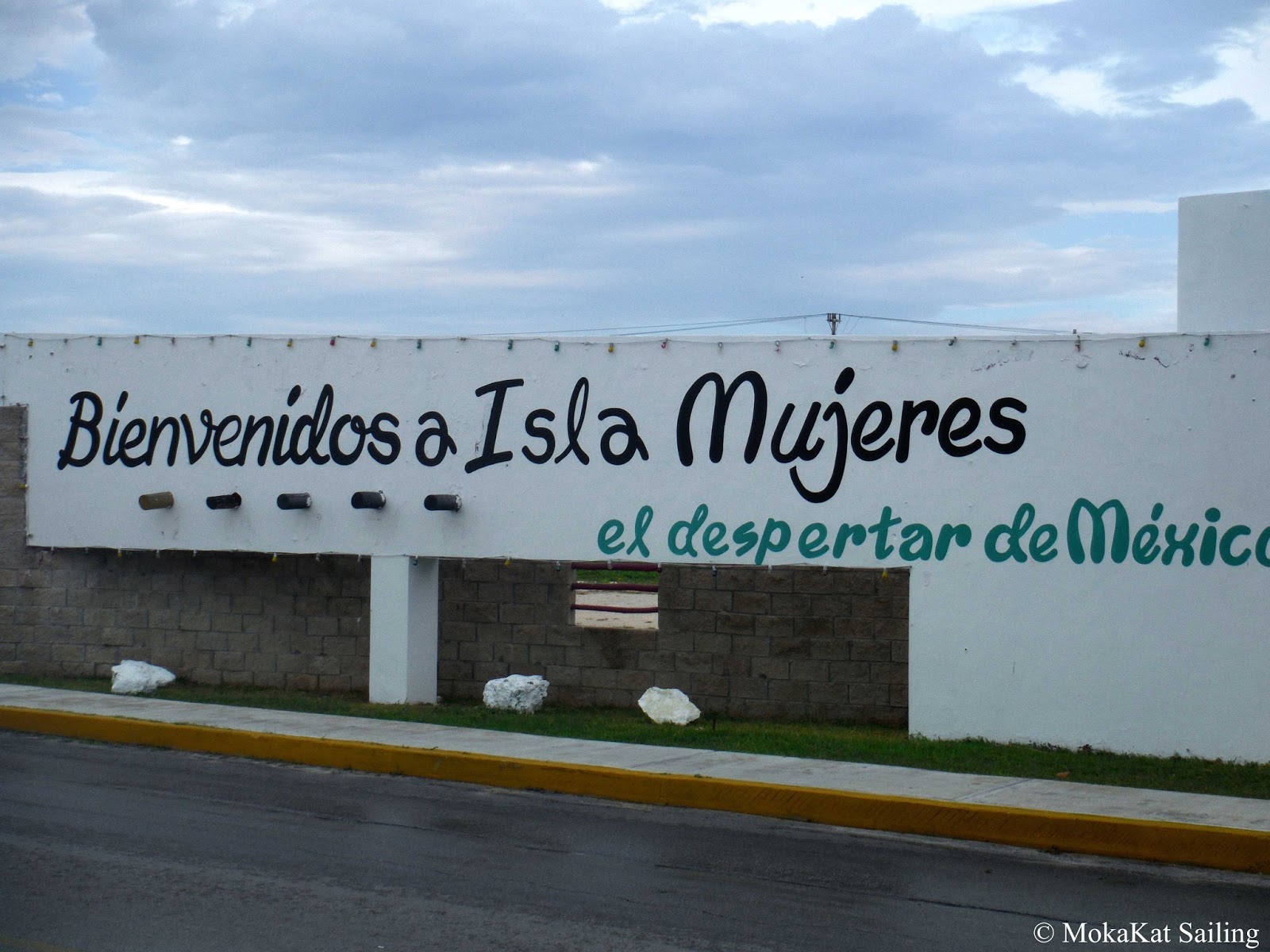 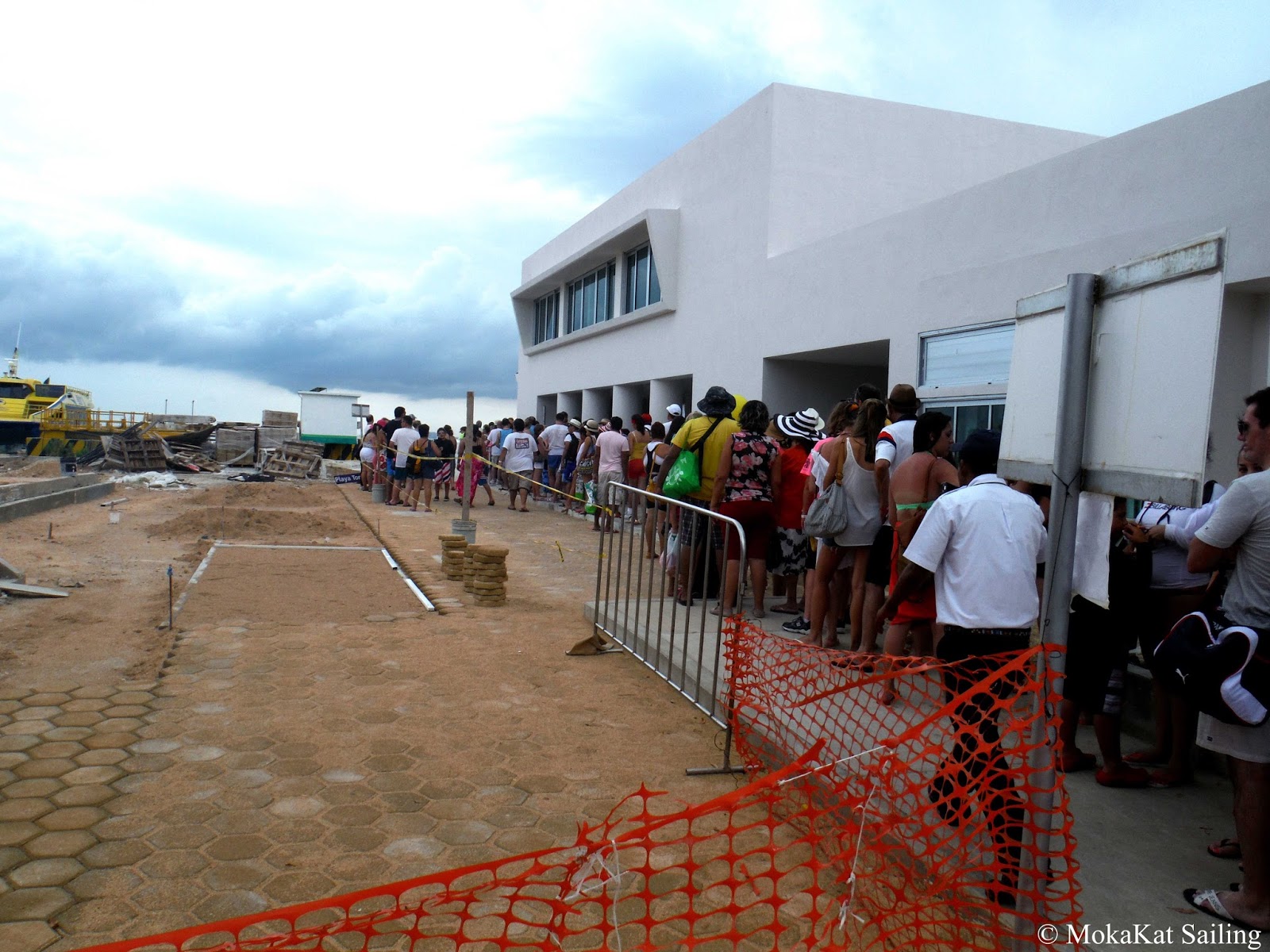 New UltraMar Ferry Dock - There is still a lot of construction going on!


We walked around the very touristy streets and enjoyed the craziness! 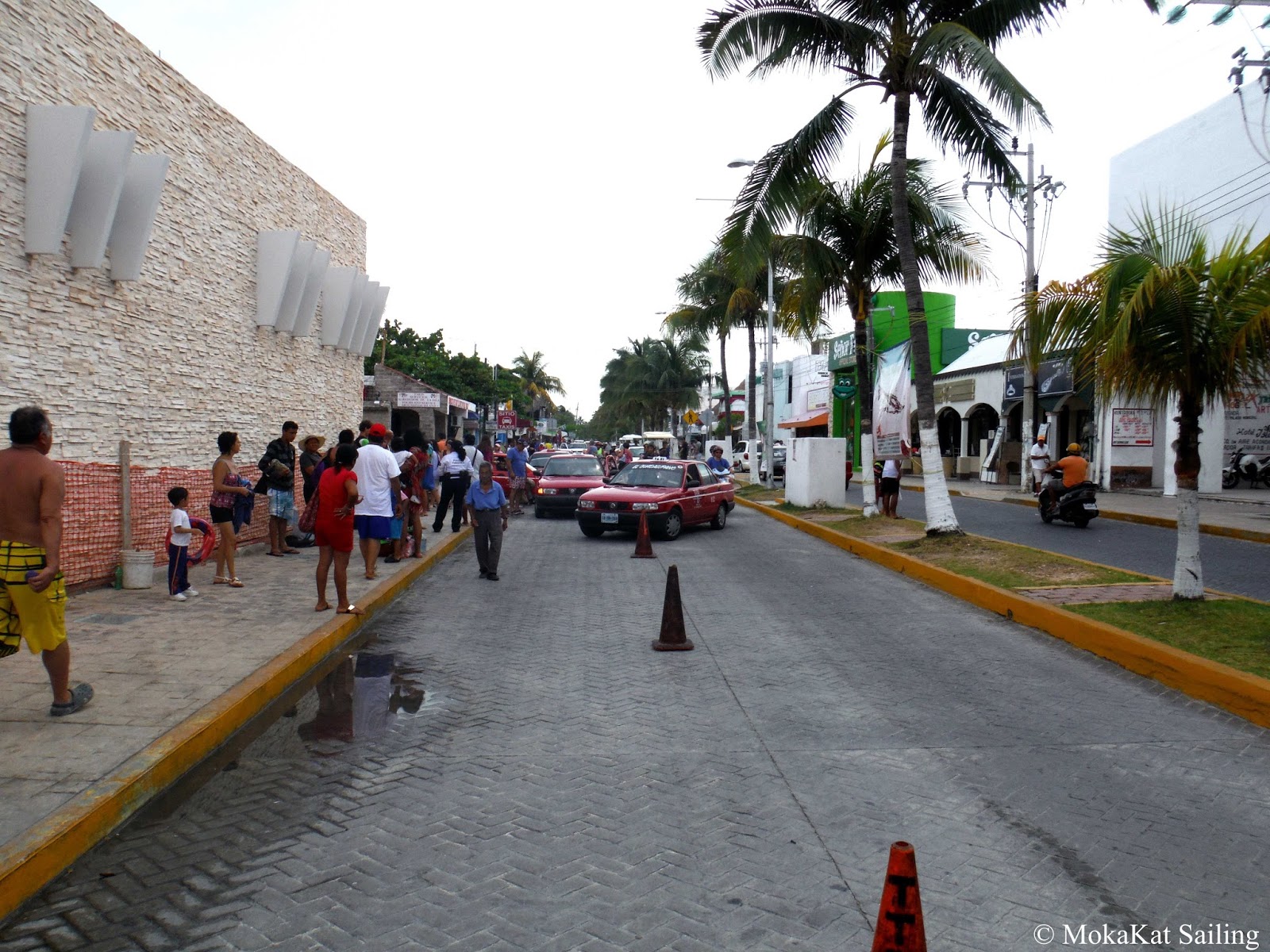 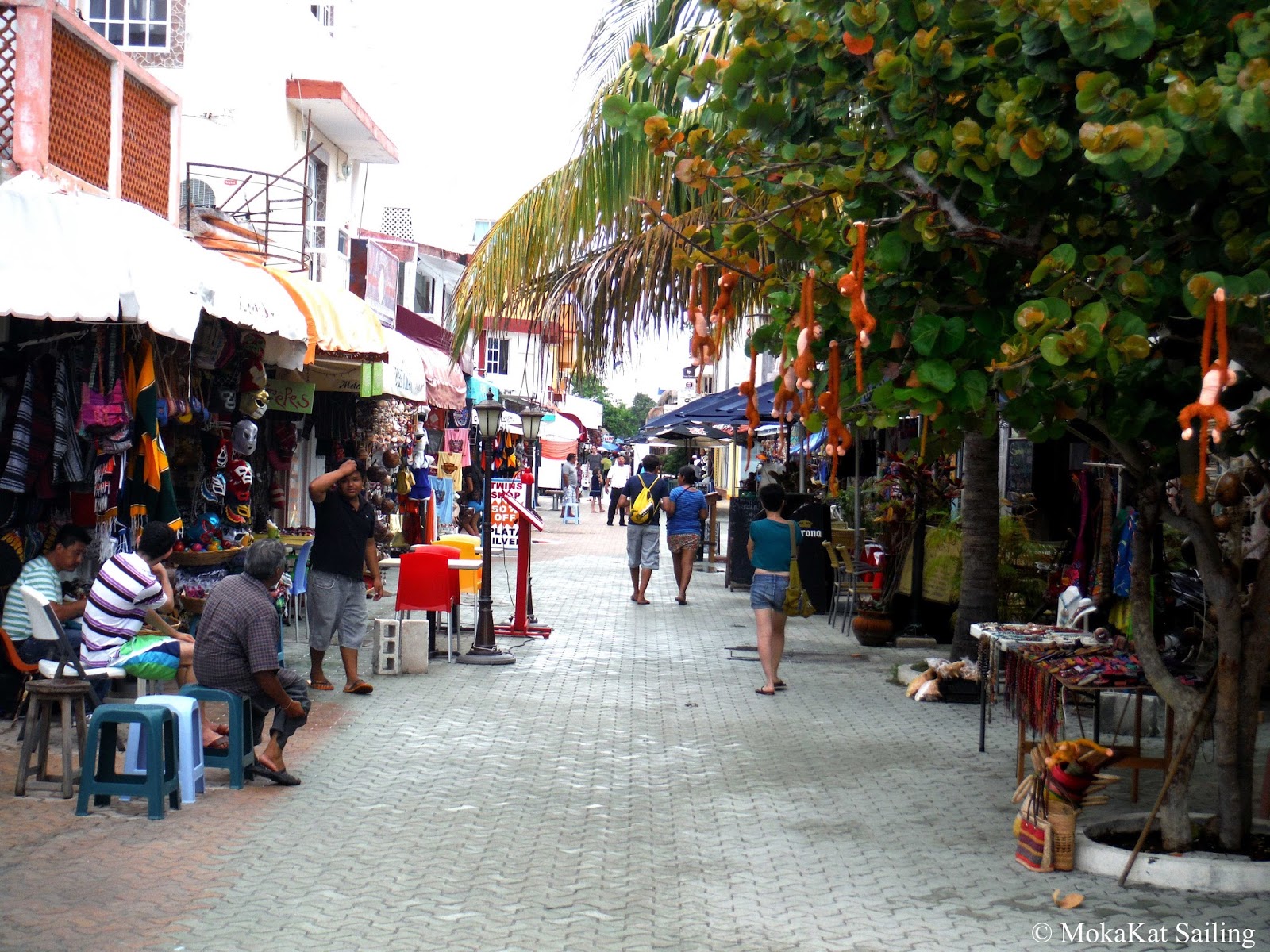 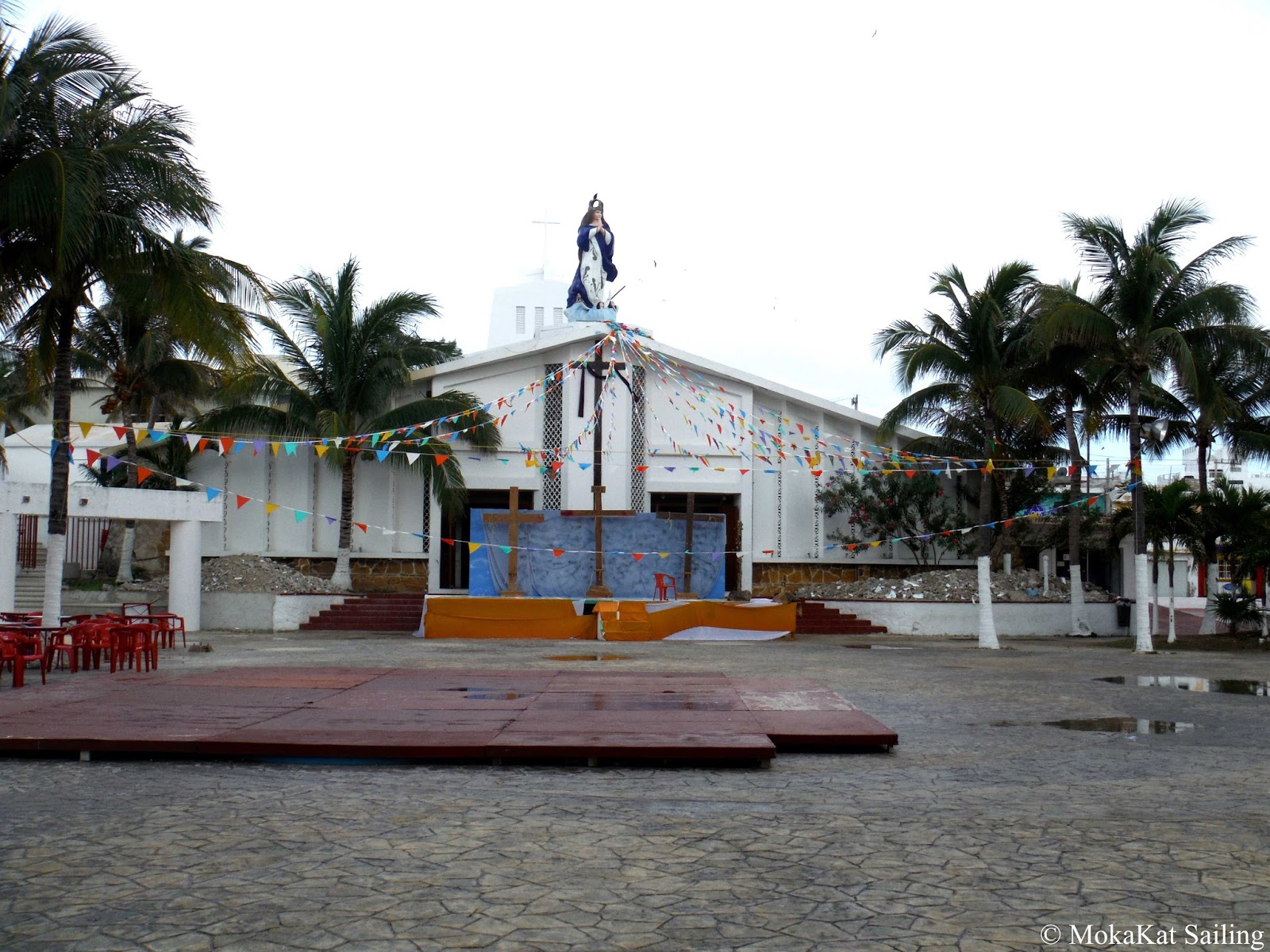 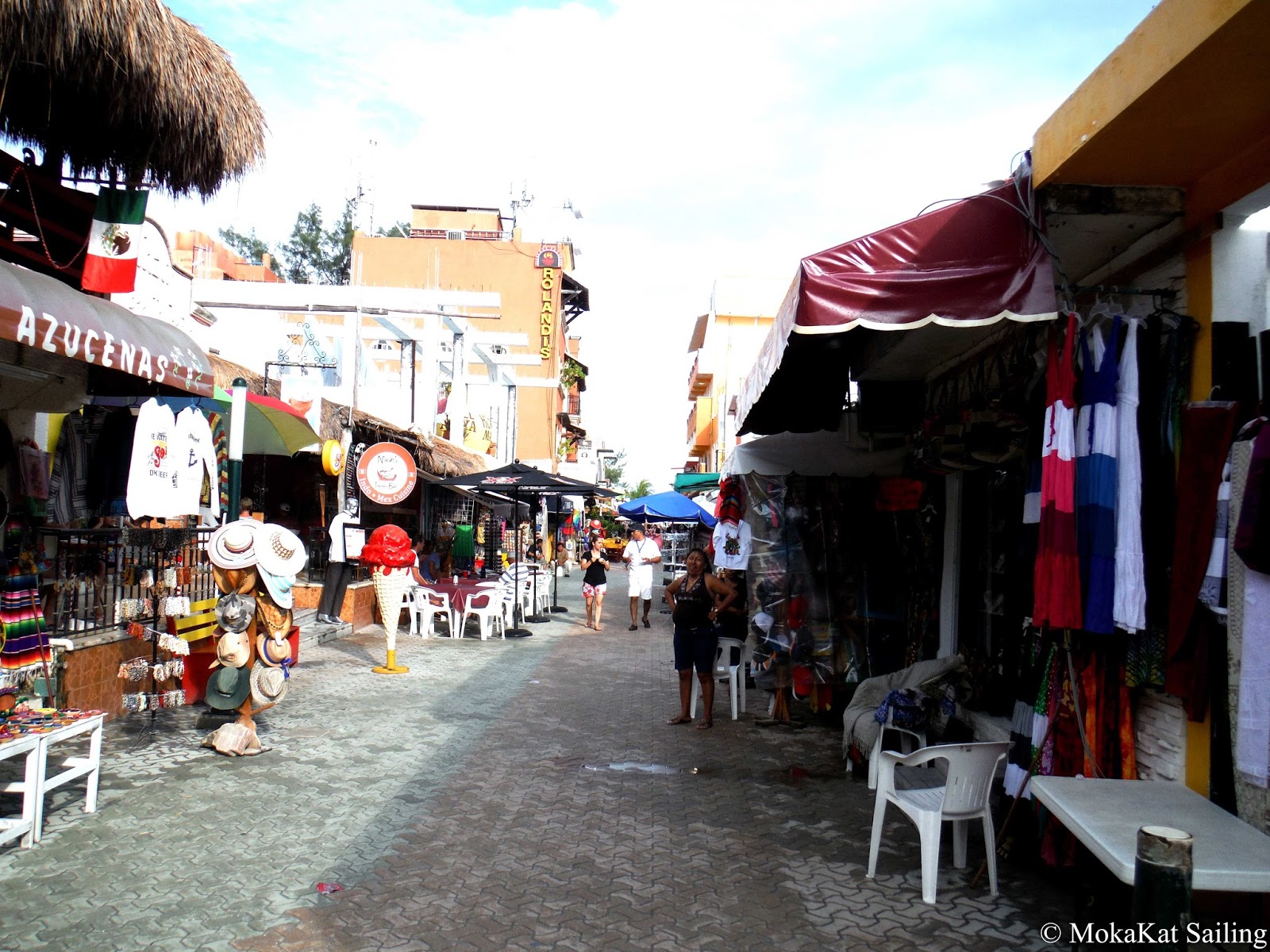 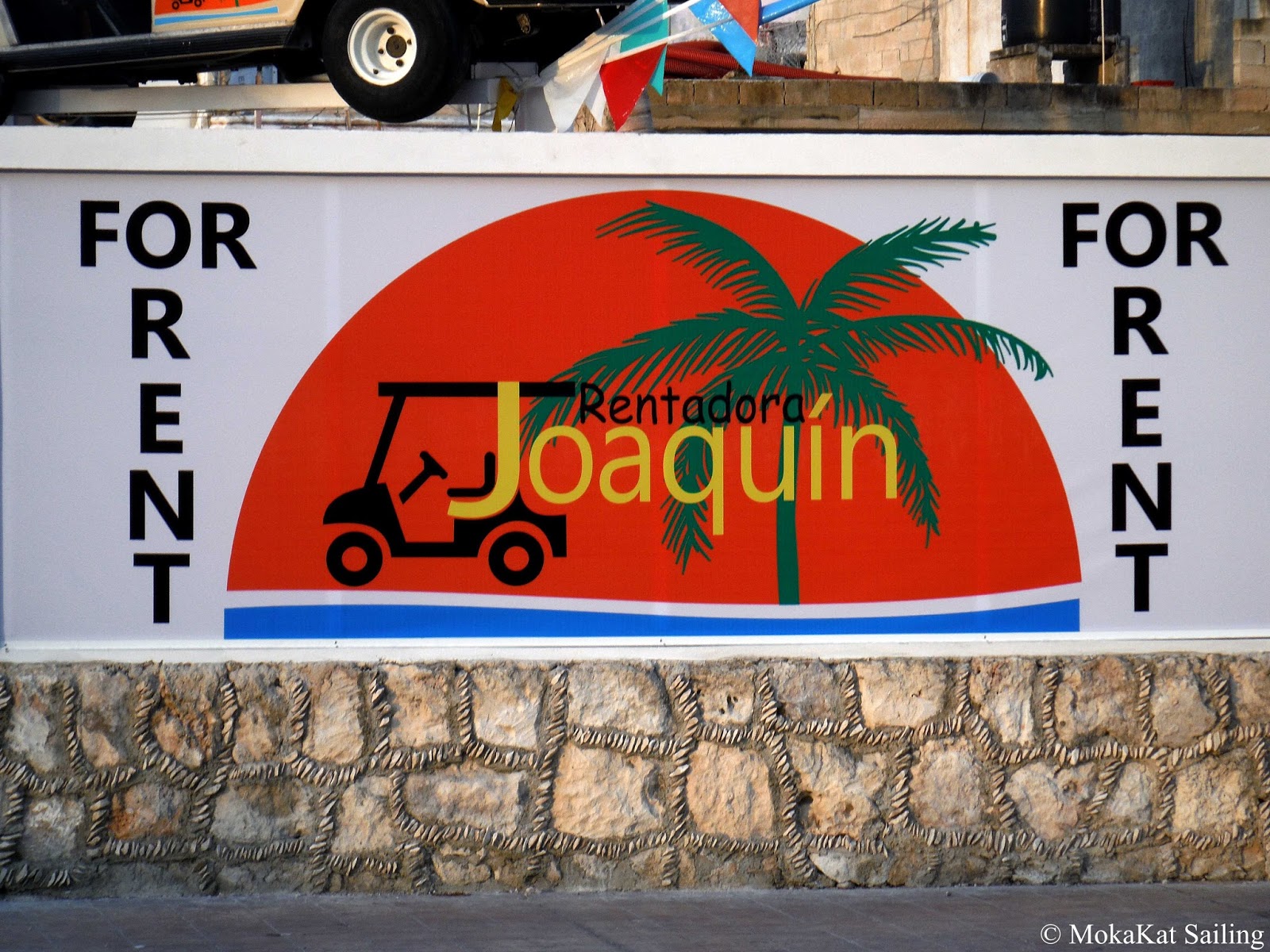 We ate a late lunch, and headed back to the boat as the sun was going down!   Beautiful sunset!!! 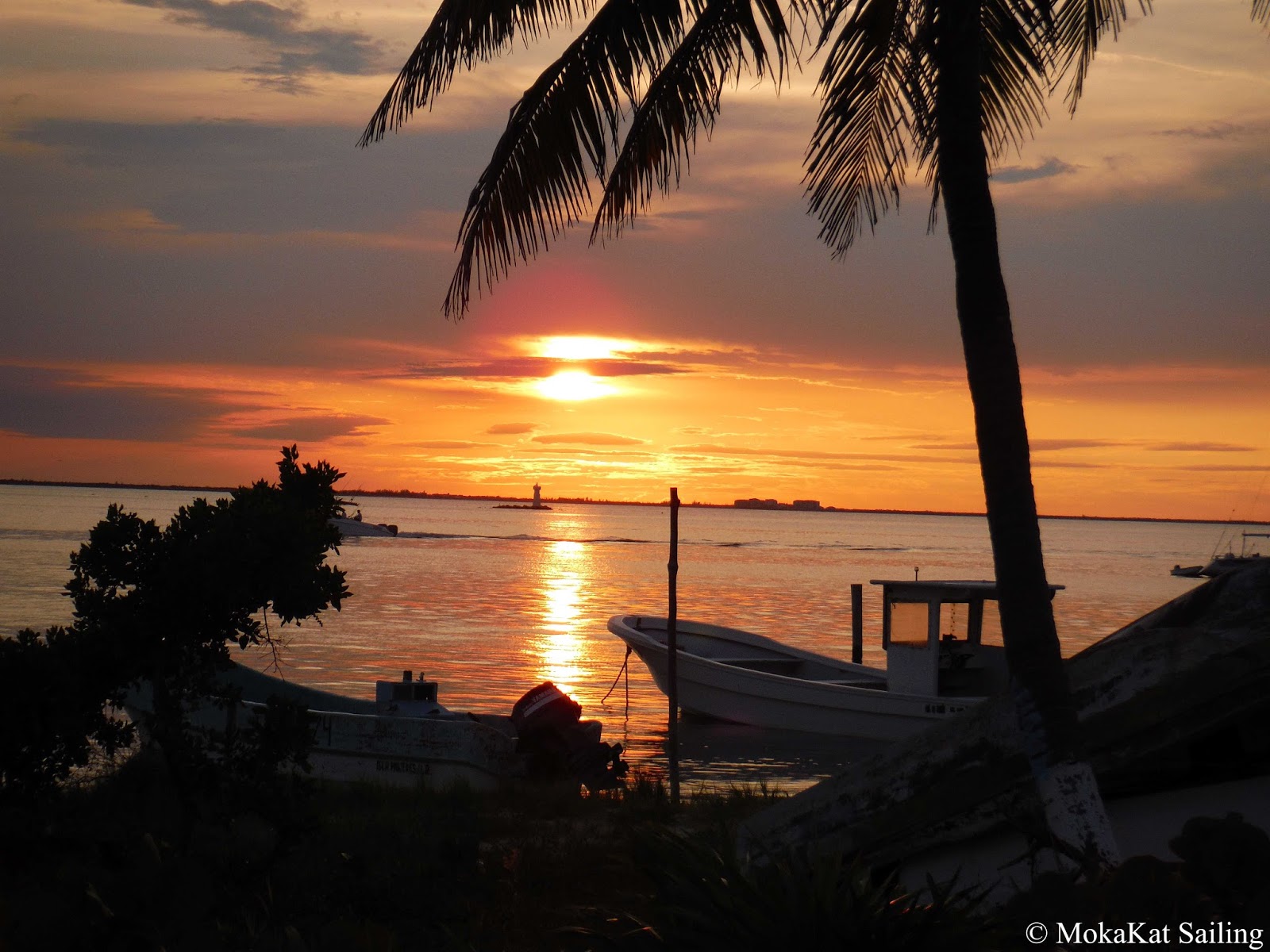 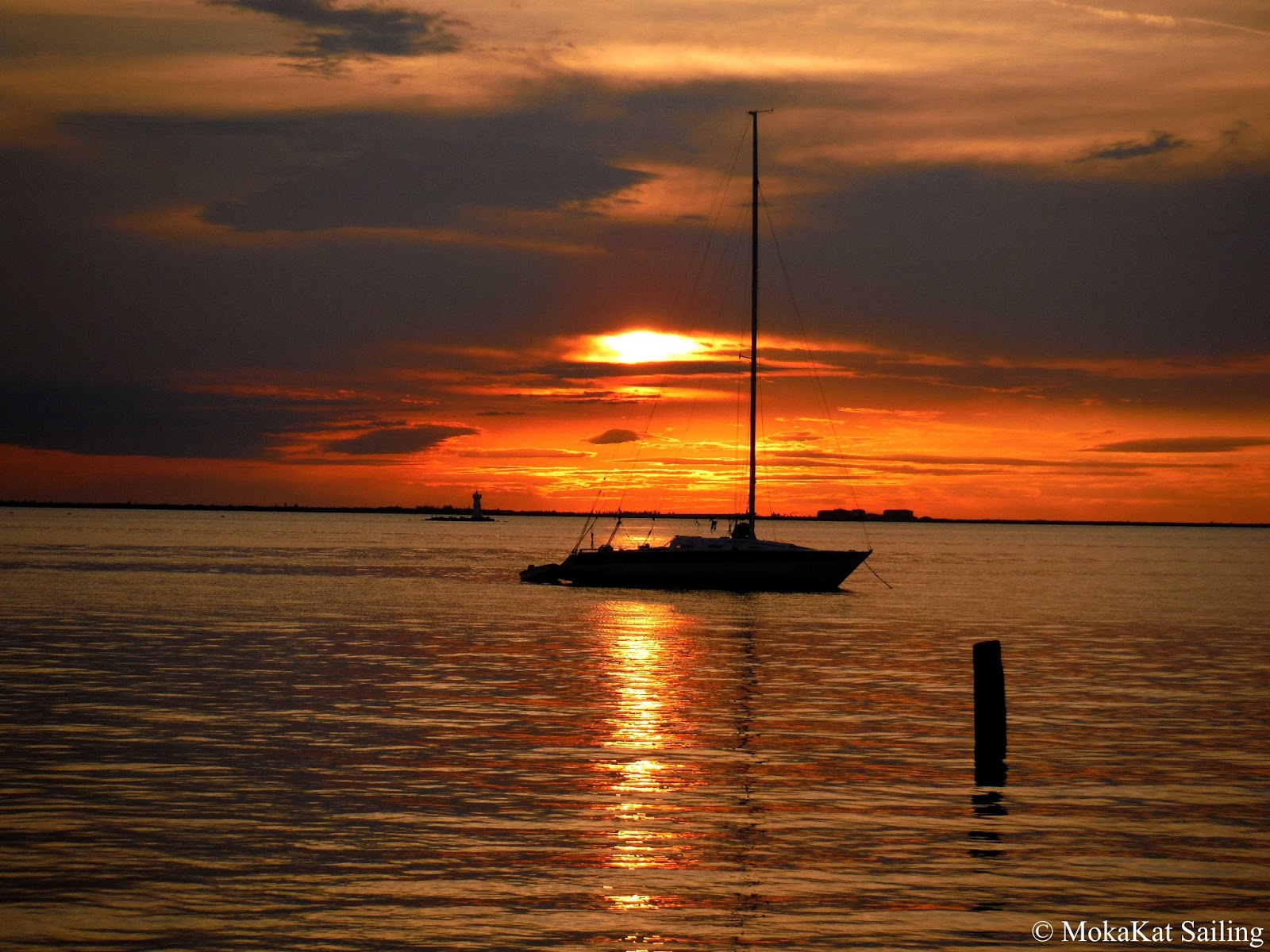 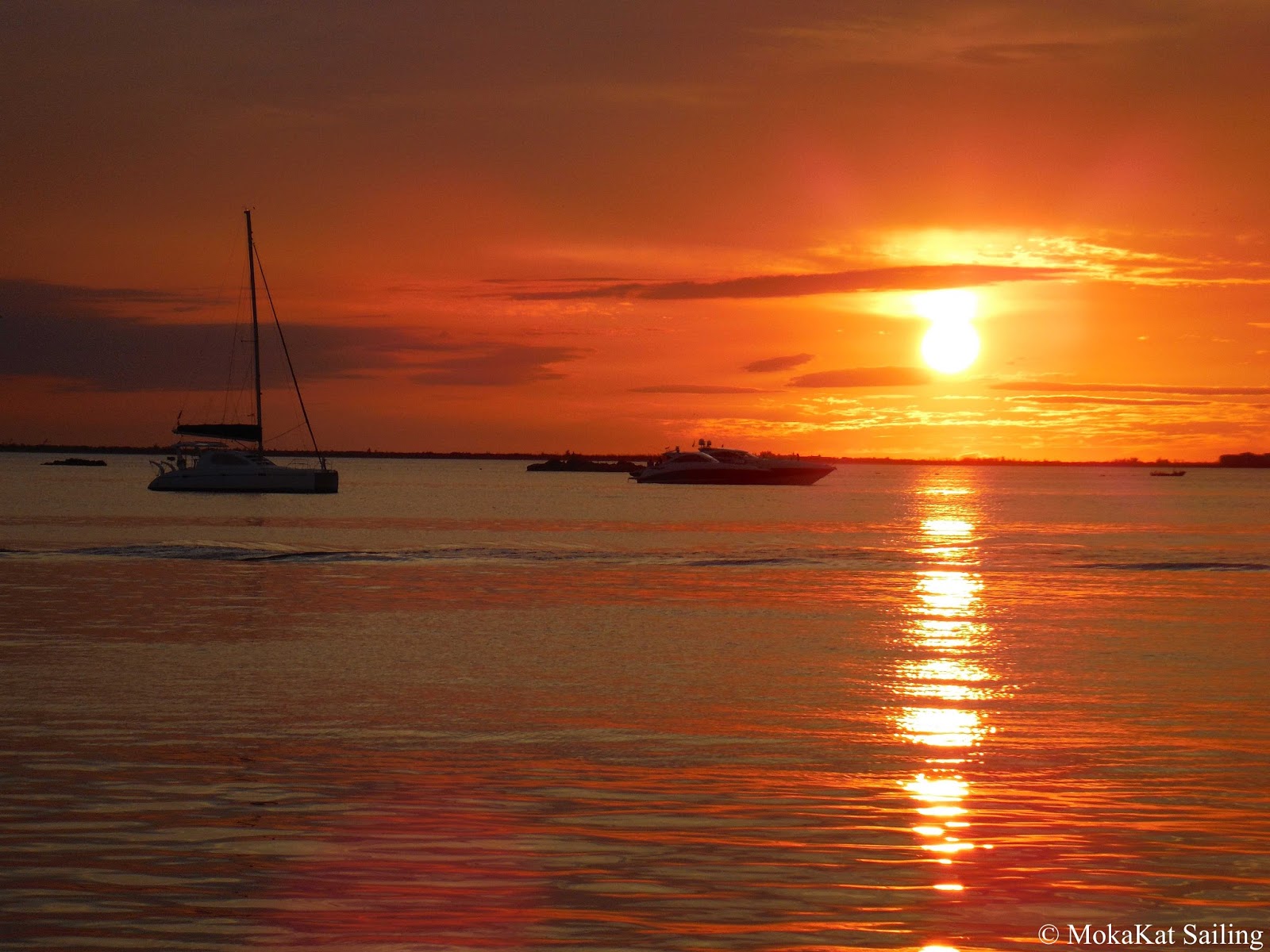 The next day, Kathi and mom headed out to find the local grocery store to replace all of our fruit and eggs.   There is a very excellent store just south of our marina.  For some reason, there are no Walmart Mexico stores on the island.  This was a surprise, as I was hoping to shop at one of the local Walmart stores.  Since Kathi and mom were off the boat, I spend some time to scrape the old name of CAPER off of the stern and put MokaKat on!  Since we finally had our USCG documentation from the US, I was able to use the new paper work to check into Mexico, although, our zarpe still had CAPER, I was ready to rename the boat s/v MokaKat. 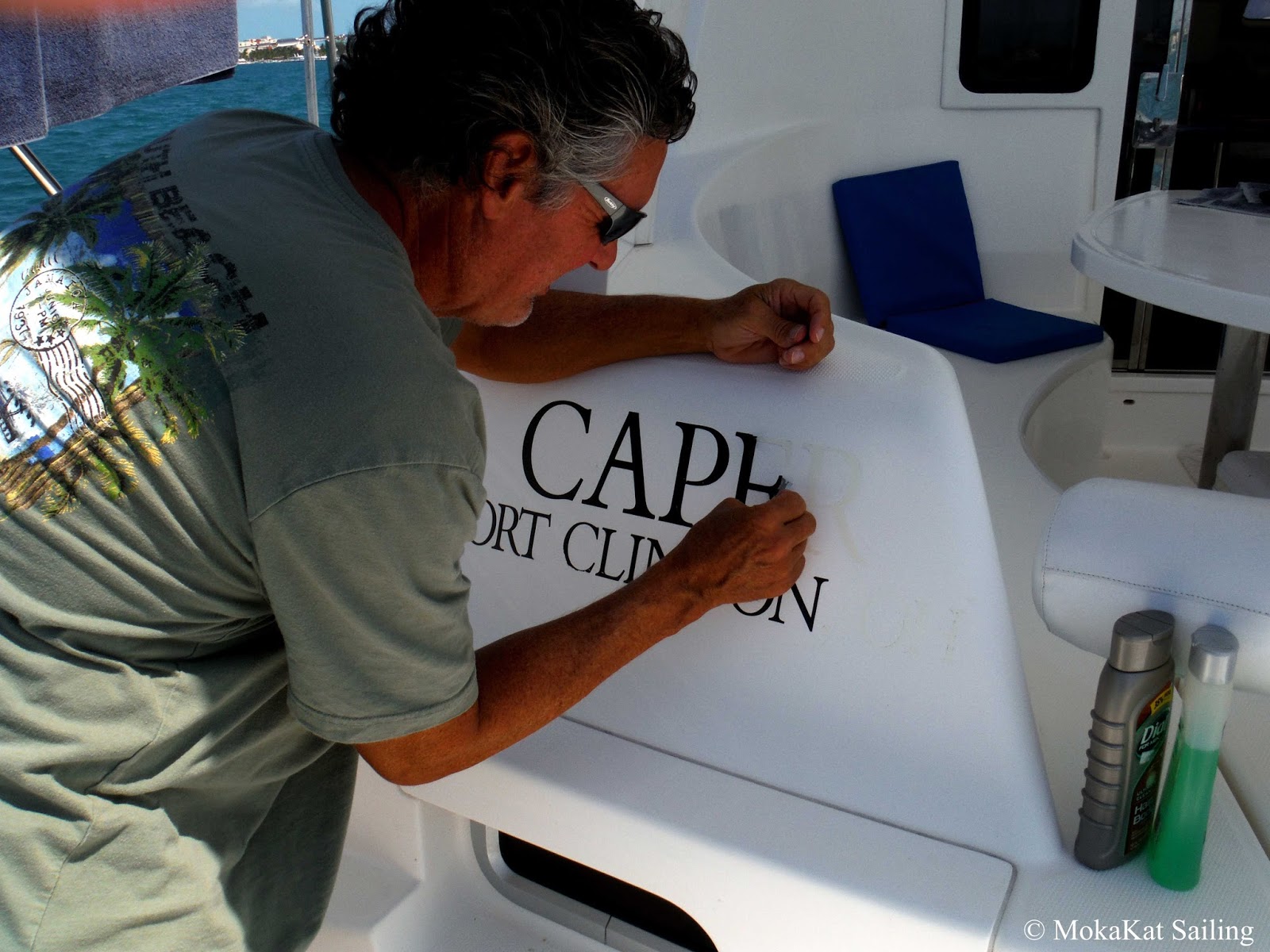 No more CAPER!
For those not experience in international travels on a boat, the zarpe is a paper from the country you check out from, in our case Belize.  It states the boat name, where you are planning on going, and crew list.  It is very important to get this paper when leaving a country!  Well, I found out that Mexico is a very paper intensive country!  I know that I must have gone 10 trips back and forth to meet Julio and bring different papers before the boat was finally checked in!  Changing the name caused some confusion, but at the end, everything was good! 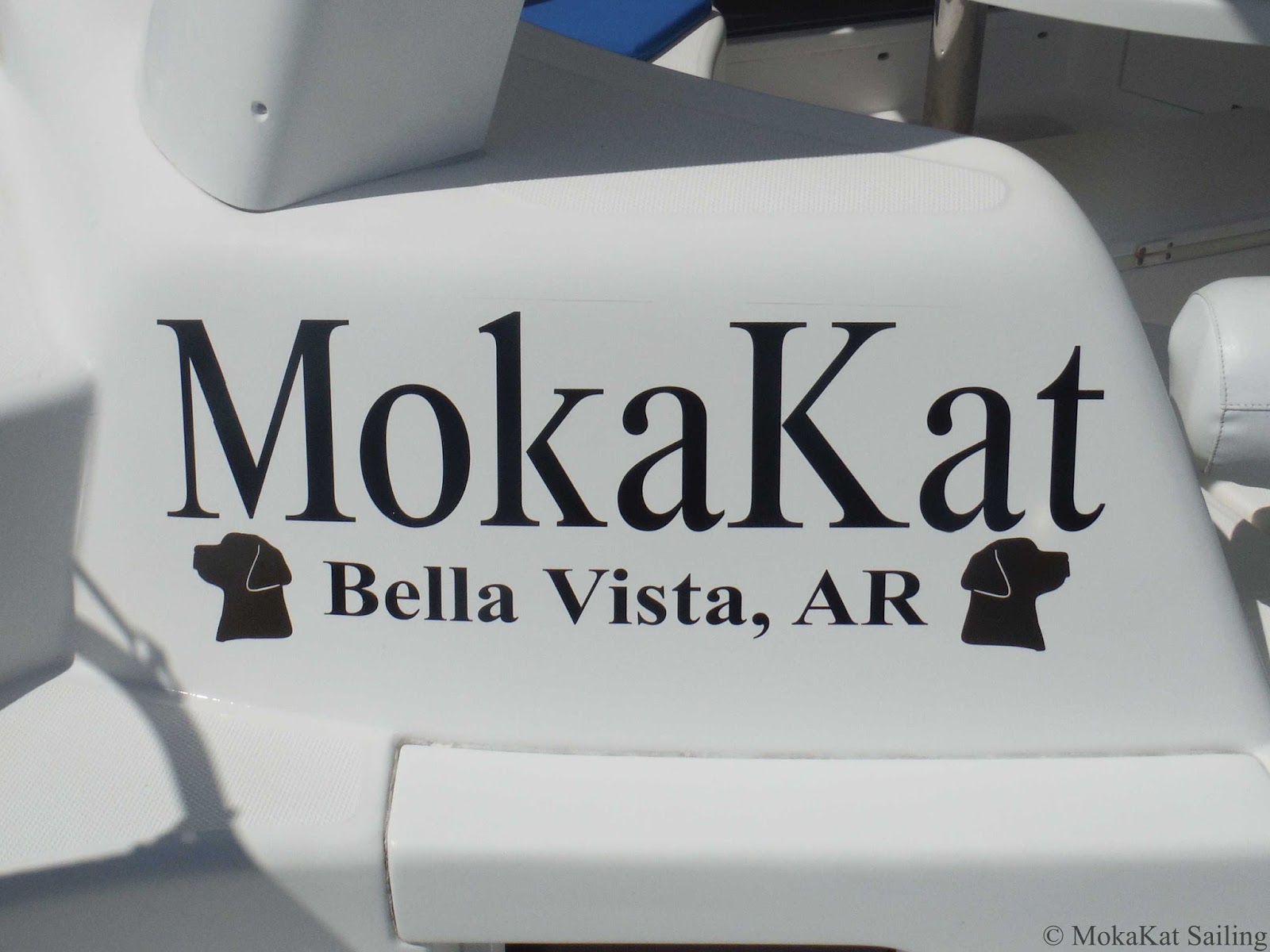 A group of us went into town to celebrate the renaming of s/v CAPER to s/v MokaKat.  It didn’t take too much encouragement to party with the cruising group!  We were on a mission to find margaritas and food, and we found lots of both!

We ended up eating street tacos at a cool little stand by the windward side of the island.  You could get 5 soft tacos with different meats for 60 pesos (less than $6).  Since they didn't serve alcohol, yes even Mexico has liquor laws; we bought beers at a local 7/11 and took to our table. 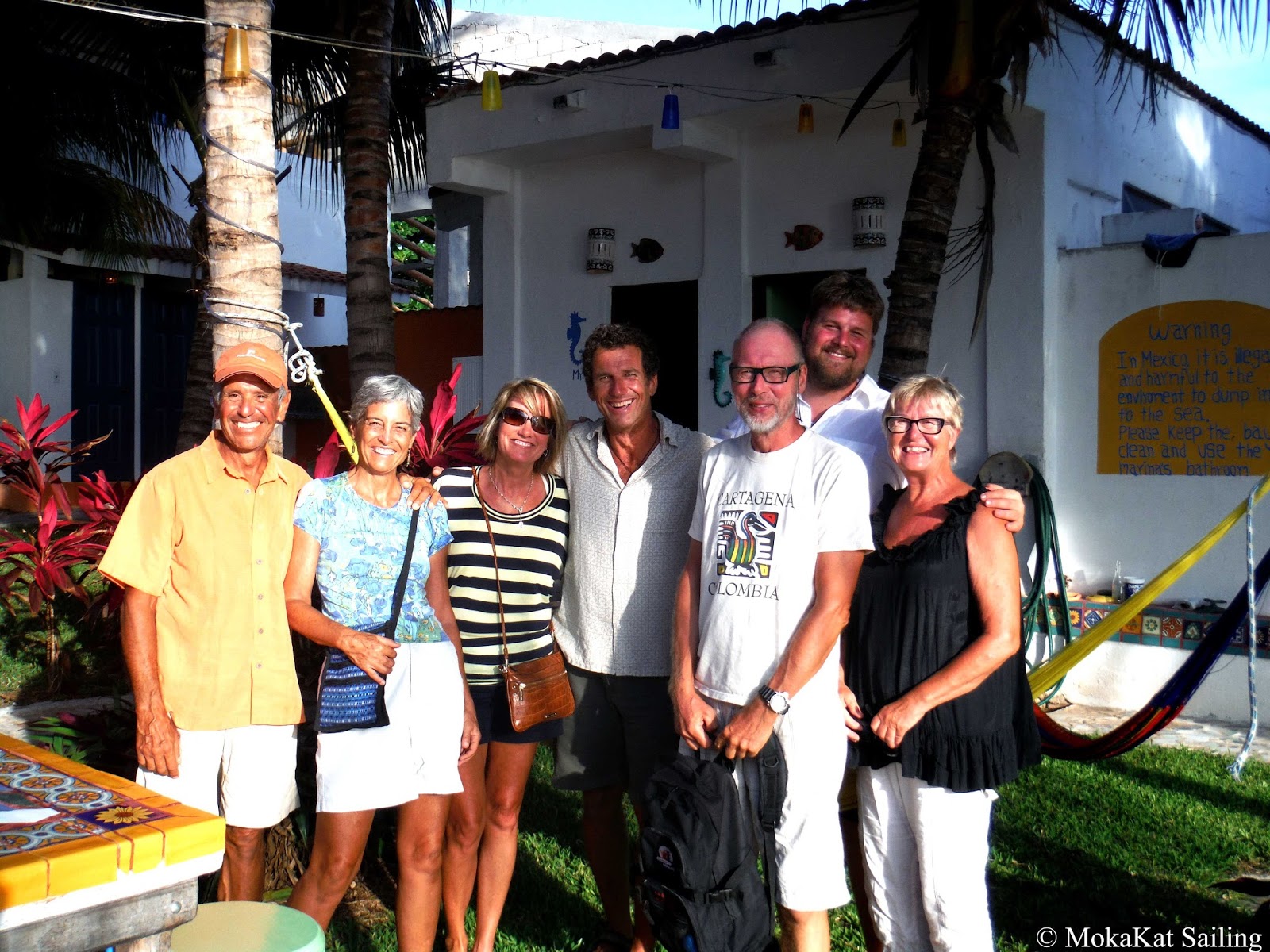 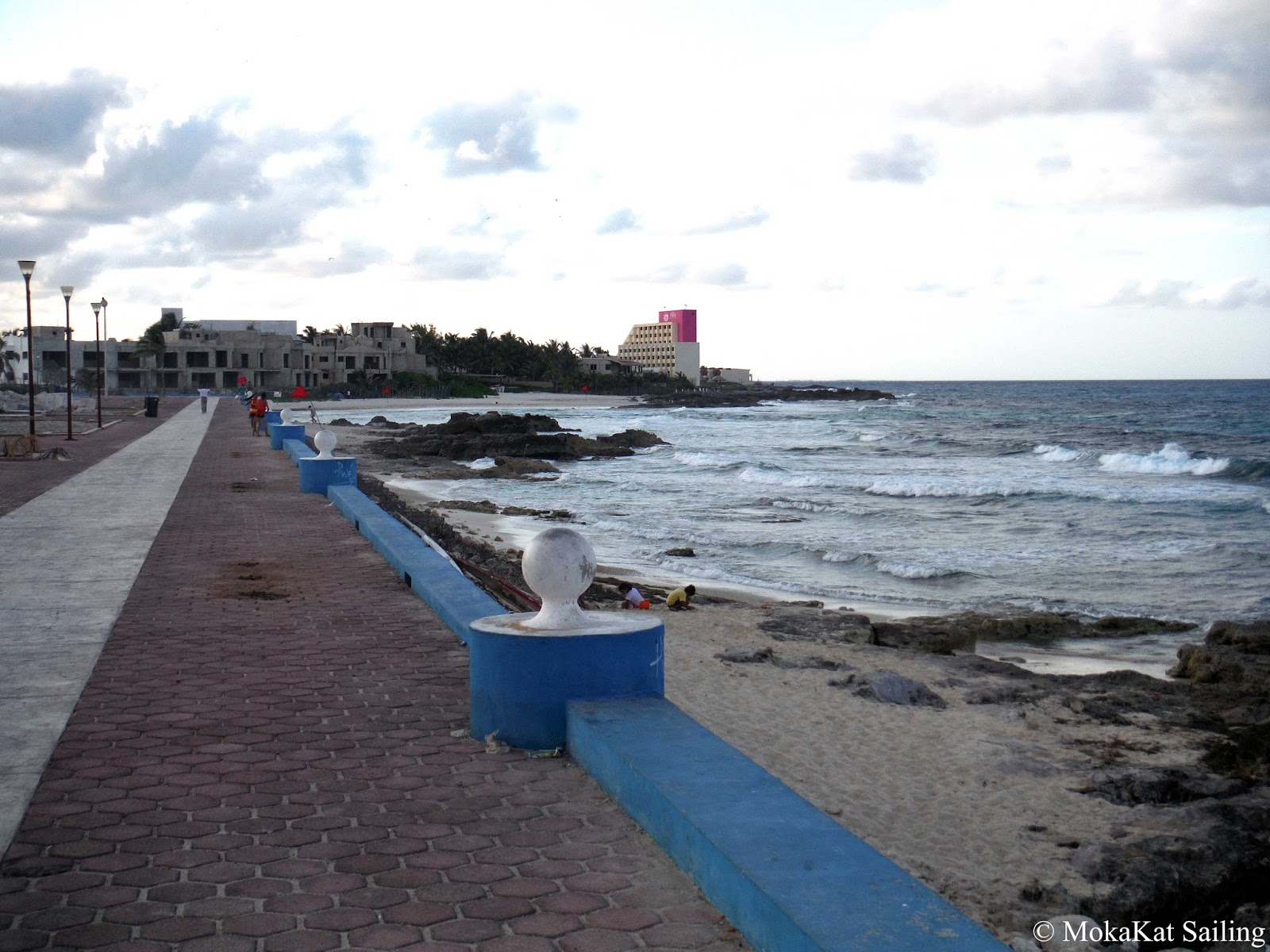 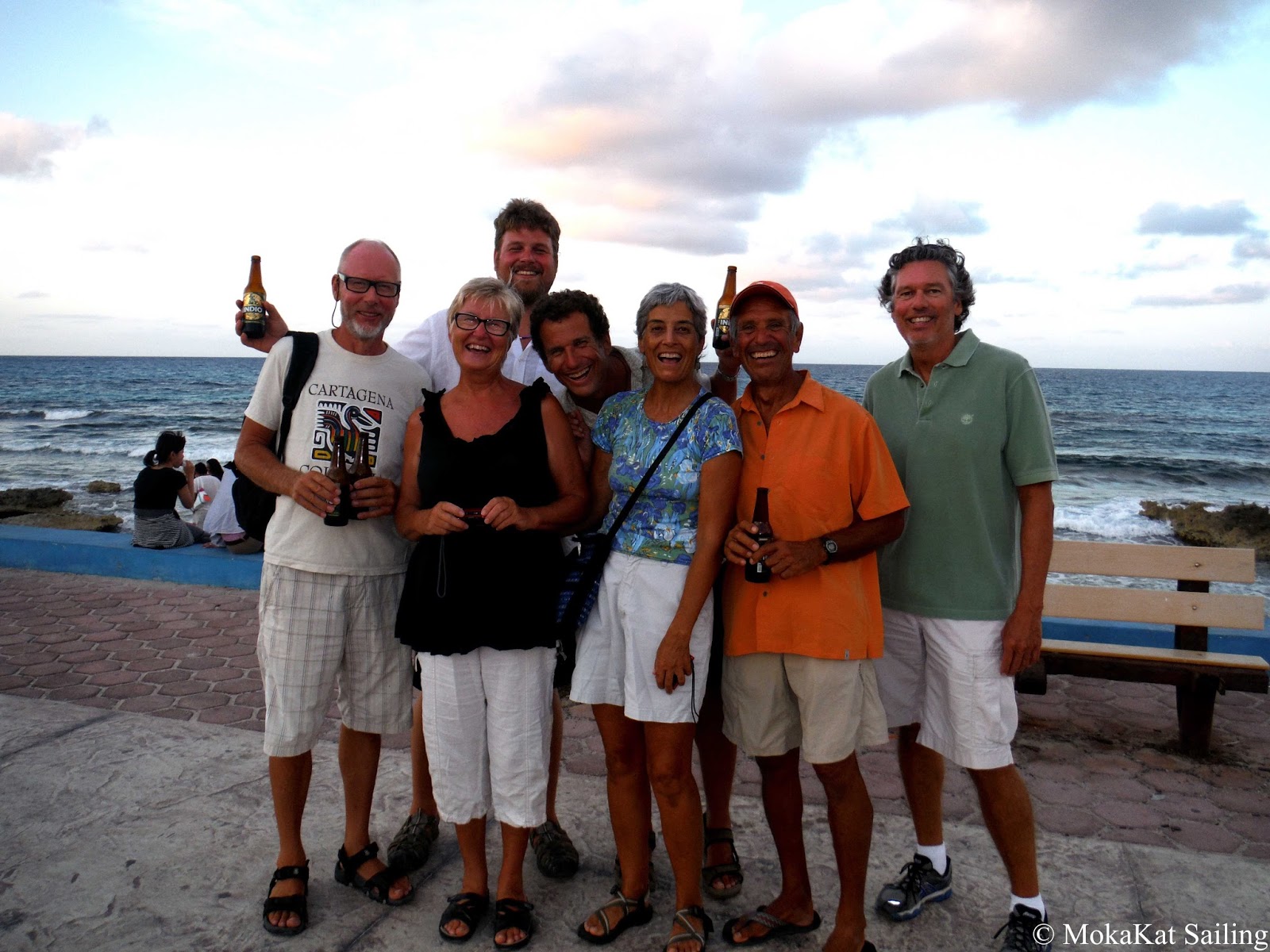 After eating, the search was on for the perfect Mexican margarita!

Sometimes you never know when an adventure might pop up!  Kathi needed to find a bathroom and I was following her around to make sure that she didn't get lost.  She ran into this guy that said to follow him, as he knows a place that would allow her to go.  At that time I don’t think that he saw me, and they started walking away down a different street!  I then saw the back of his shirt, and I couldn't resist taking their picture.  Here was my sister walking with some old guy that she just met on the street with a t-shirt that said: ‘STAFF if you don’t want to party, don’t fucking come’!  At that point I started laughing and they both stopped to see what was going on.  I explained to Kathi about his shirt, and introduced myself to the guy, just in case he didn't know that she was my sister.  We all started laughing…and finally he told us that he gets different t-shirts from a company for $1 each, not knowing what they say.  He then took us to a restaurant that he was friends with the owner (it think everyone here is connected in some way), and we were able to use their bathroom!  The guy turned out to be pretty nice and we ended up running into him later on the street.  I remember something about him being in a band, but can’t remember his name or which band. 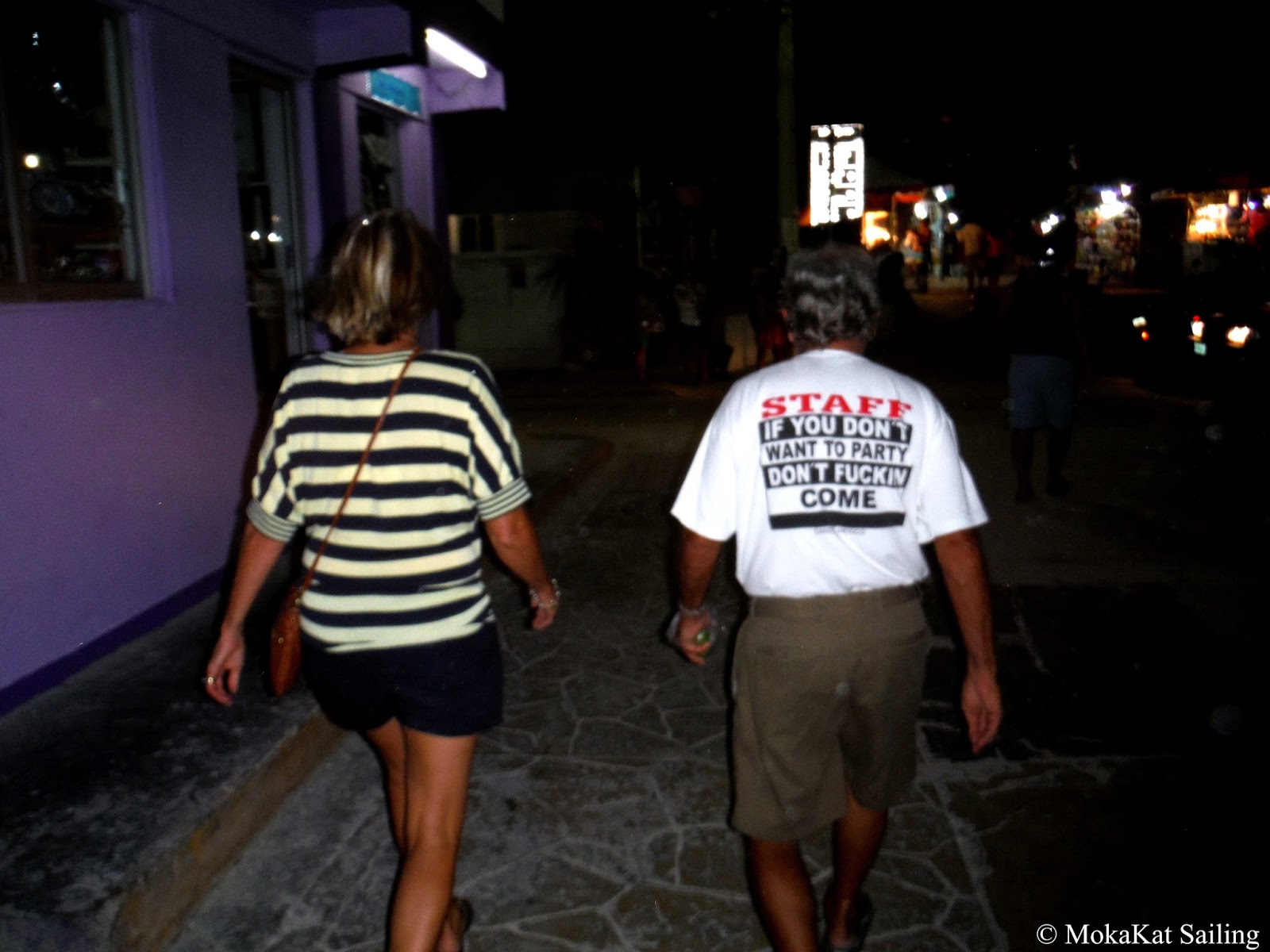 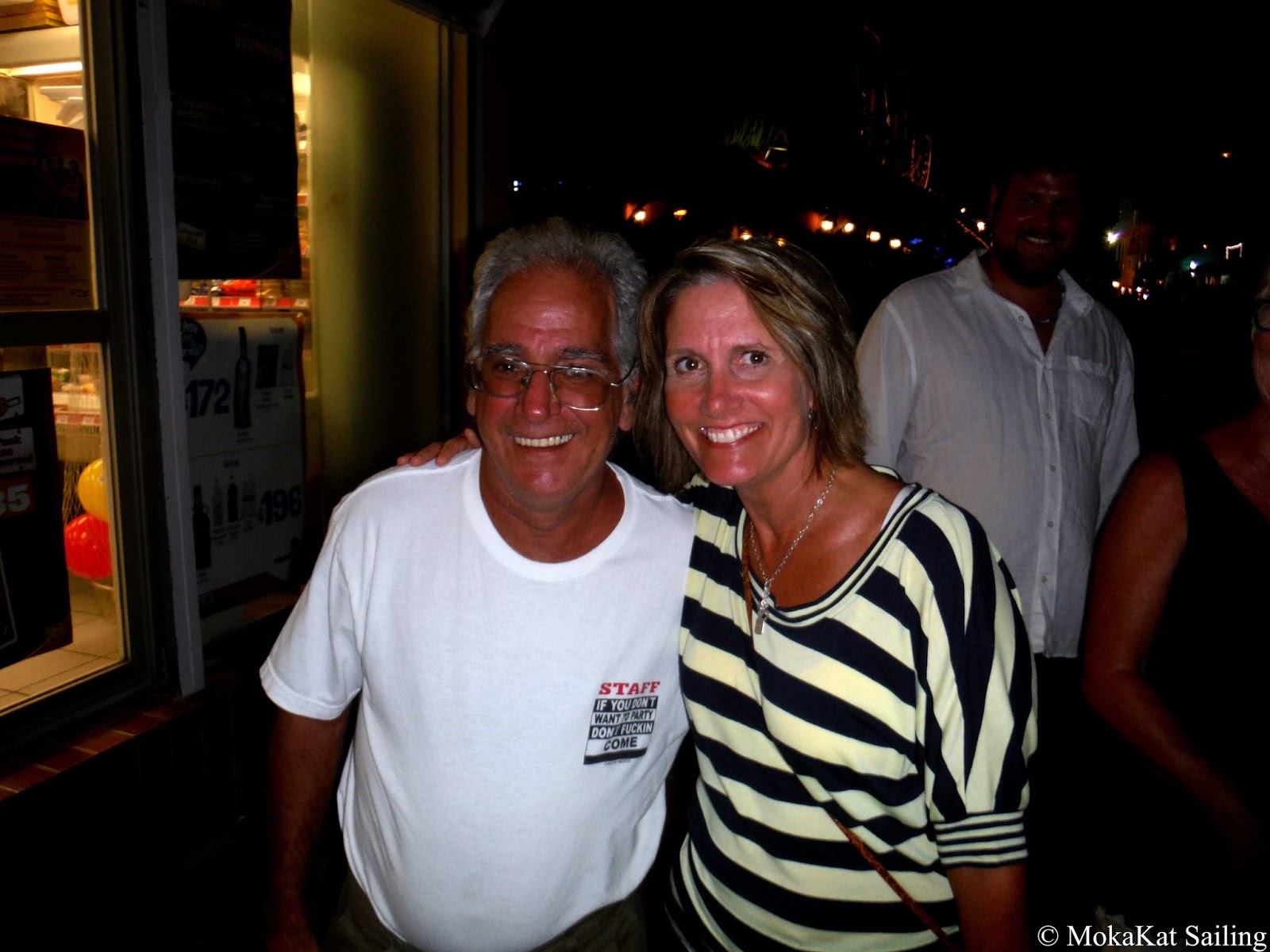 Kathi's new friend!
We finally find a tequila bar that had 2 for 1 margaritas.  It also included a tequila shot too, all for 85 pesos, not too bad.  Kathi and I split the 2 for 1, and ended up getting a shot each of tequila.  Nothing like doing tequila shots with your sister!  That has to be a first! 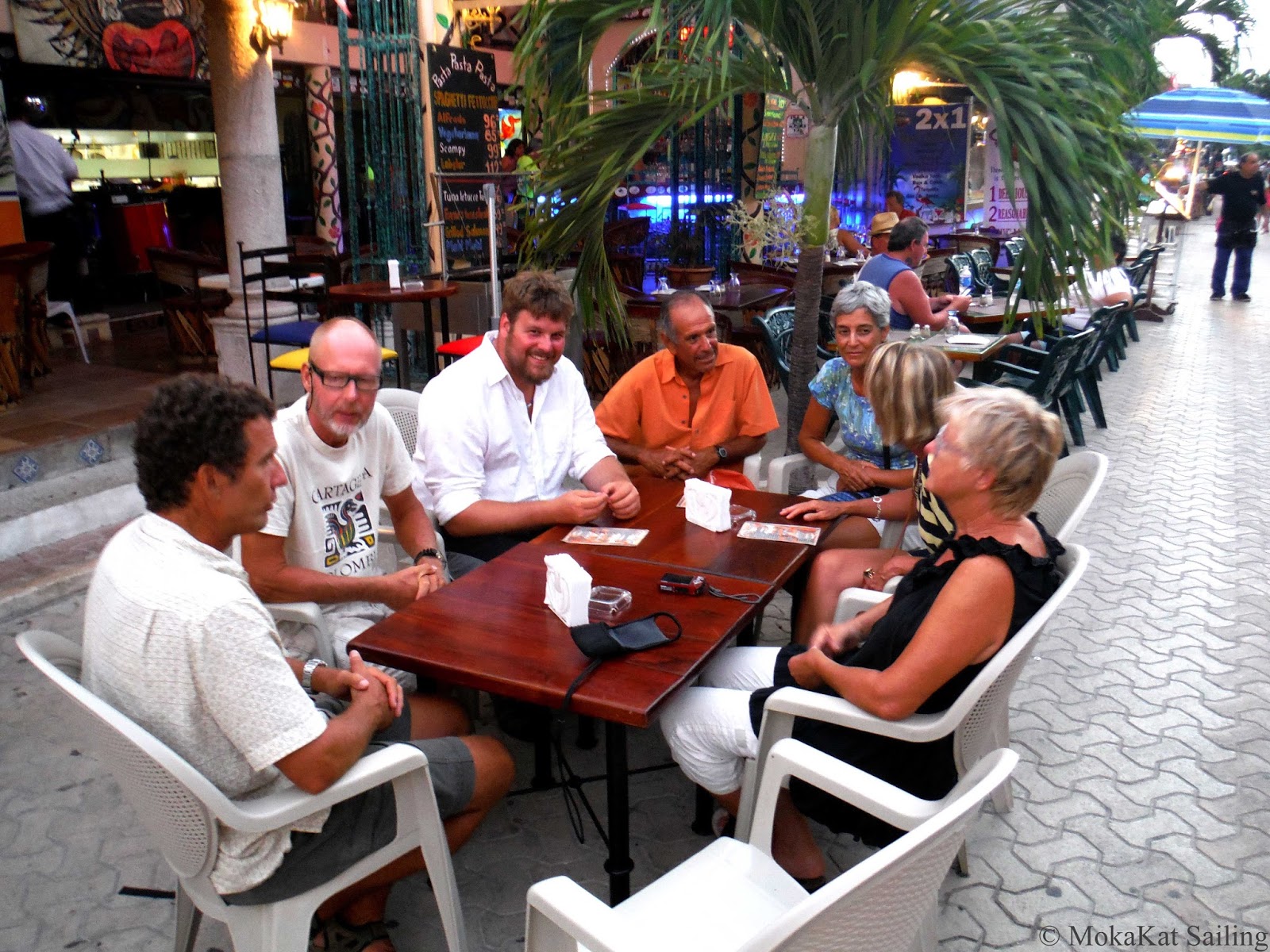 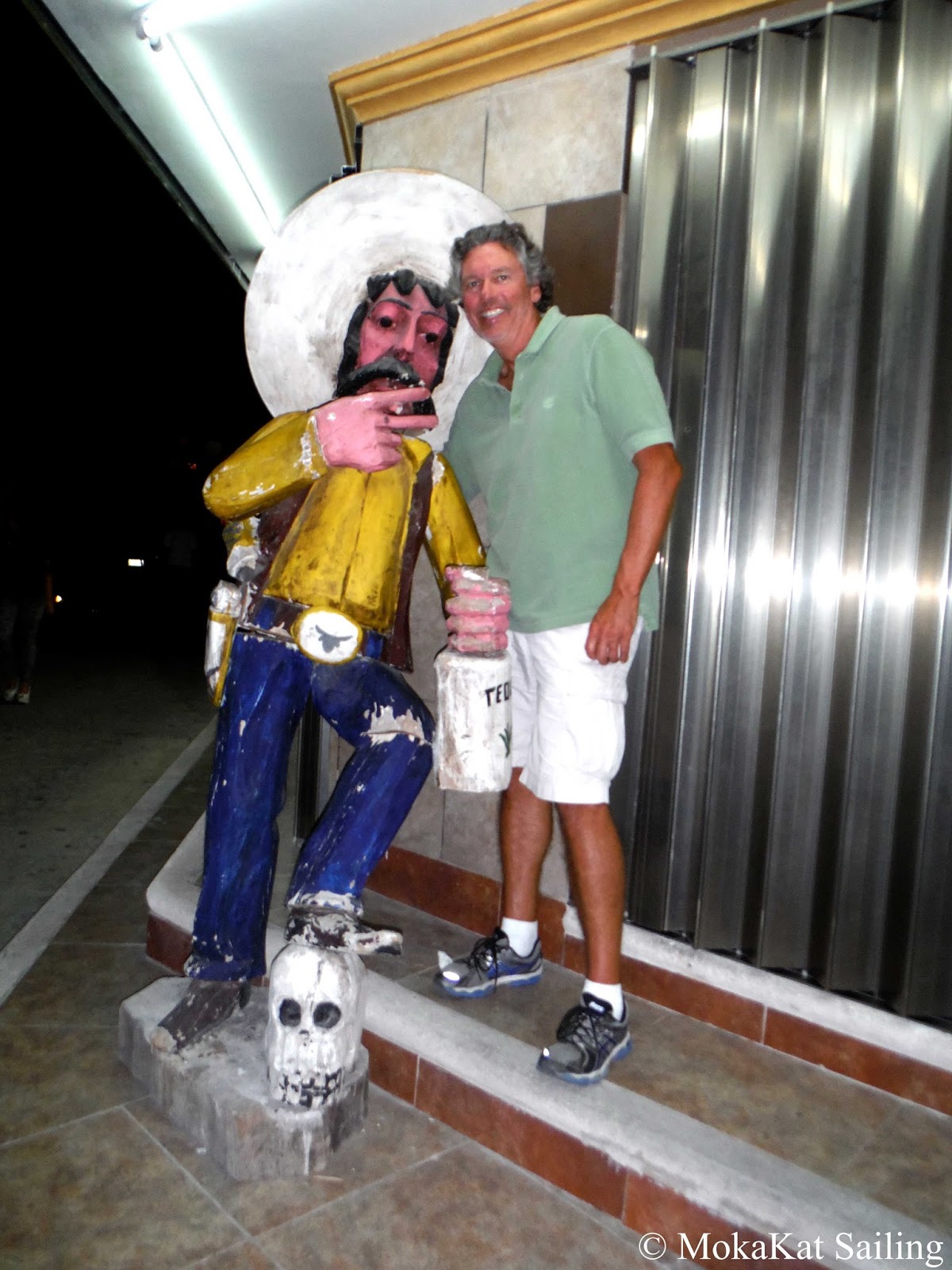 I had some bad influence that night!

It was a long walk back to the marina, but we had fun!  No one got lost and we all made it back to our boats, after a quick dinghy ride in the dark.  The celebration of the renaming of MokaKat was complete later, as I poured some red wine to the sea gods.  Of course it was just a little, as no sense wasting good Argentine red wine! 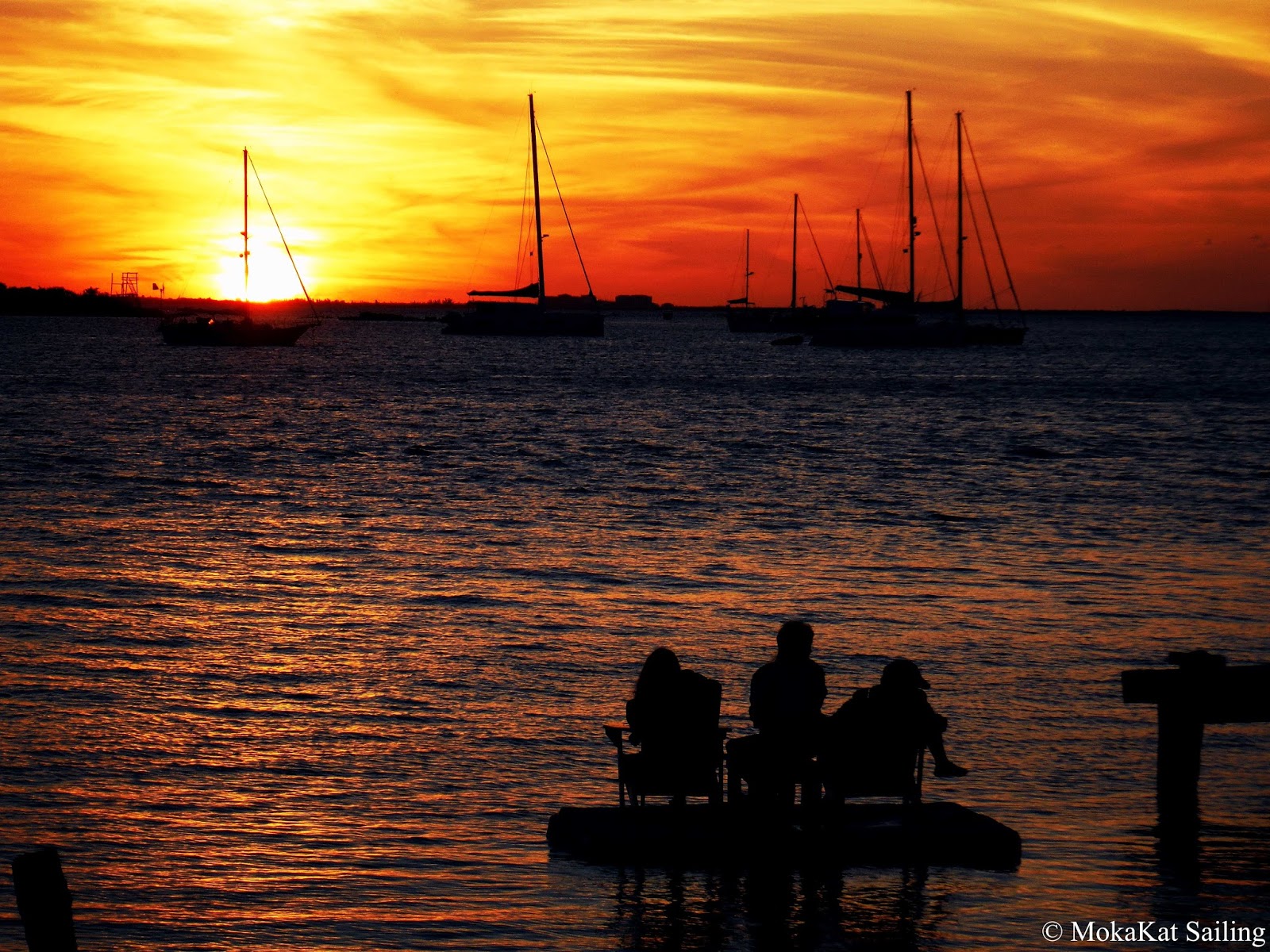 Happy Sailing on MokaKat!
Posted by Unknown at 12:56 PM