After enjoying a few weeks back in Arkansas, Maria Paula and I headed to Belize to join my mother and MokaKat!  My mom stayed on the boat in the Moorings Marina in Placencia while I was in Arkansas.  She enjoyed hanging out at the marina and going out with her friends there.
The trip down to Belize was supposed to be a low adventure thing, as I have been there several times.  The challenge happened on the plane heading from North West Arkansas to Houston, not even outside of the US.  Just before we were approaching Houston, the pilot announced to the plane that there was some sort of alarm light concerning the landing gear, and we would land surrounded by fire trucks and ambulances!  He said it so casually that Maria Paula didn't understand that there was any emergency.  She asked me what he said, and I told her that I would tell her once we landed!  Of course, I didn't want her to worry about something that we had no control over.  I can just imaging the landing gear failing, and the plane sliding down the runway on it's belly...fire...exit slides...you get the picture!  Well, they were right about the fire trucks and the ambulances, as they lined the runway.  The pilot brought the plane in normally, and smoothly brought the plane down on the landing gear.  Once the plane was finally touching all wheels, he slammed on the breaks full on, and didn't put the engines into reverse!  You could just feel the break pads heating up with the grating and noise.  Finally we stopped, dead stopped, in the middle of the runway, and the fire trucks all pulled up.  The pilot said that they were just checking the brake pad temperature, as I would have to agree with that 'foot to the metal' stop!  I guess everything was fine, as we finally moved into a gate to get off!  I then explained to Maria Paula about why there was fire trucks and ambulances.  She wasn't too mad, as she knows how nervous she gets sometime!  They awarded each of us an additional 7000 frequent flier miles for that little incident.  The rest of the trip was a breeze, and we made it to Placencia later that afternoon!
Maria Paula has not been on a catamaran before, so we decided to take it slow.  We stayed the first night in the marina and the next morning enjoying a big brunch at the Laru Baya Resort.  We then moved the boat into the Placencia Harbor.  There we did some shopping and provisioning in Placencia, and watched some dolphins play in the harbor.
The next morning, we raised the sails and headed out to Cary Cay, a small deserted island, just about 12 miles from Placencia.  The weather was excellent, and we had a great sail.  Maria Paula helped raise the sail and enjoyed the smooth sail. 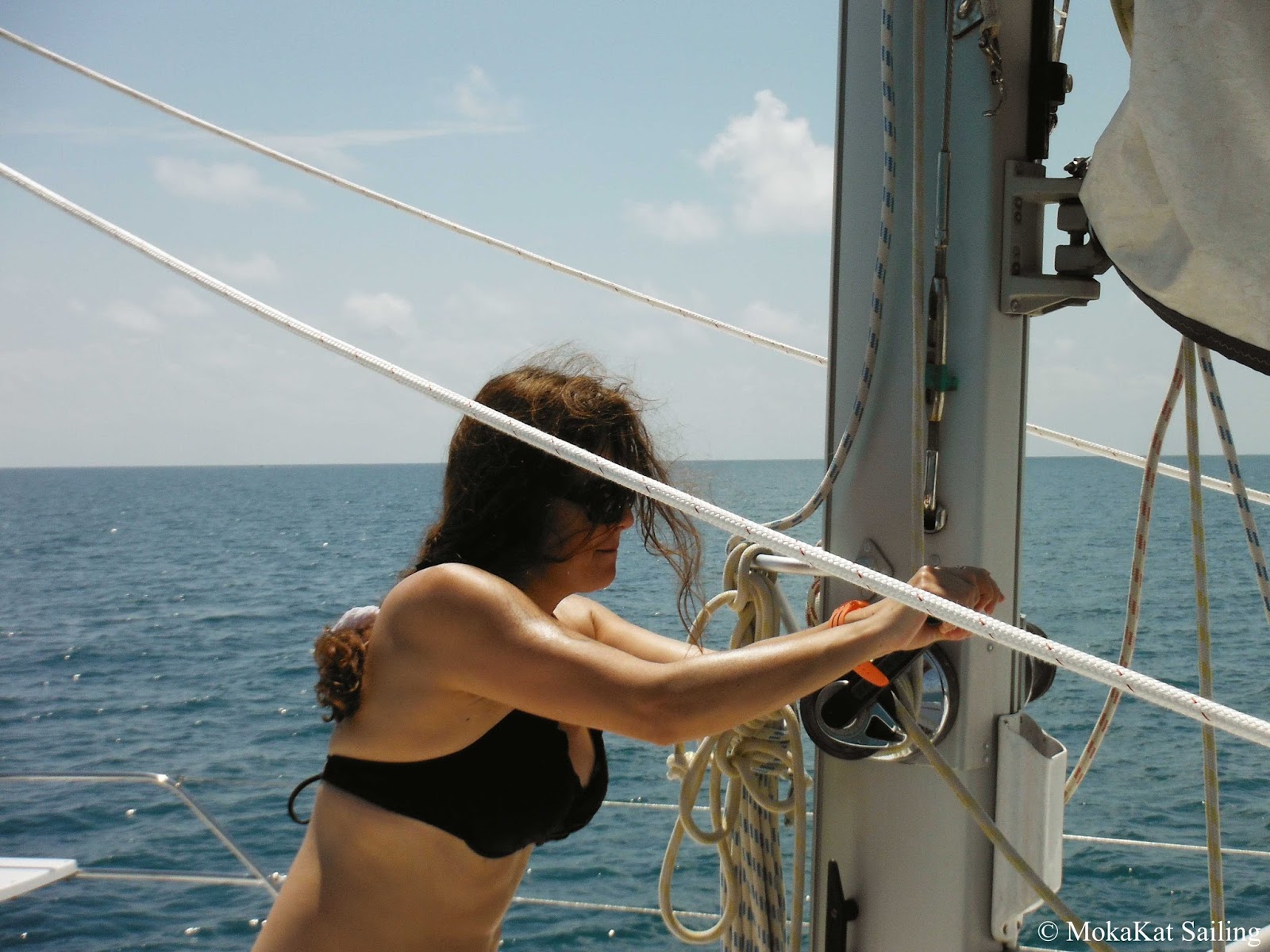 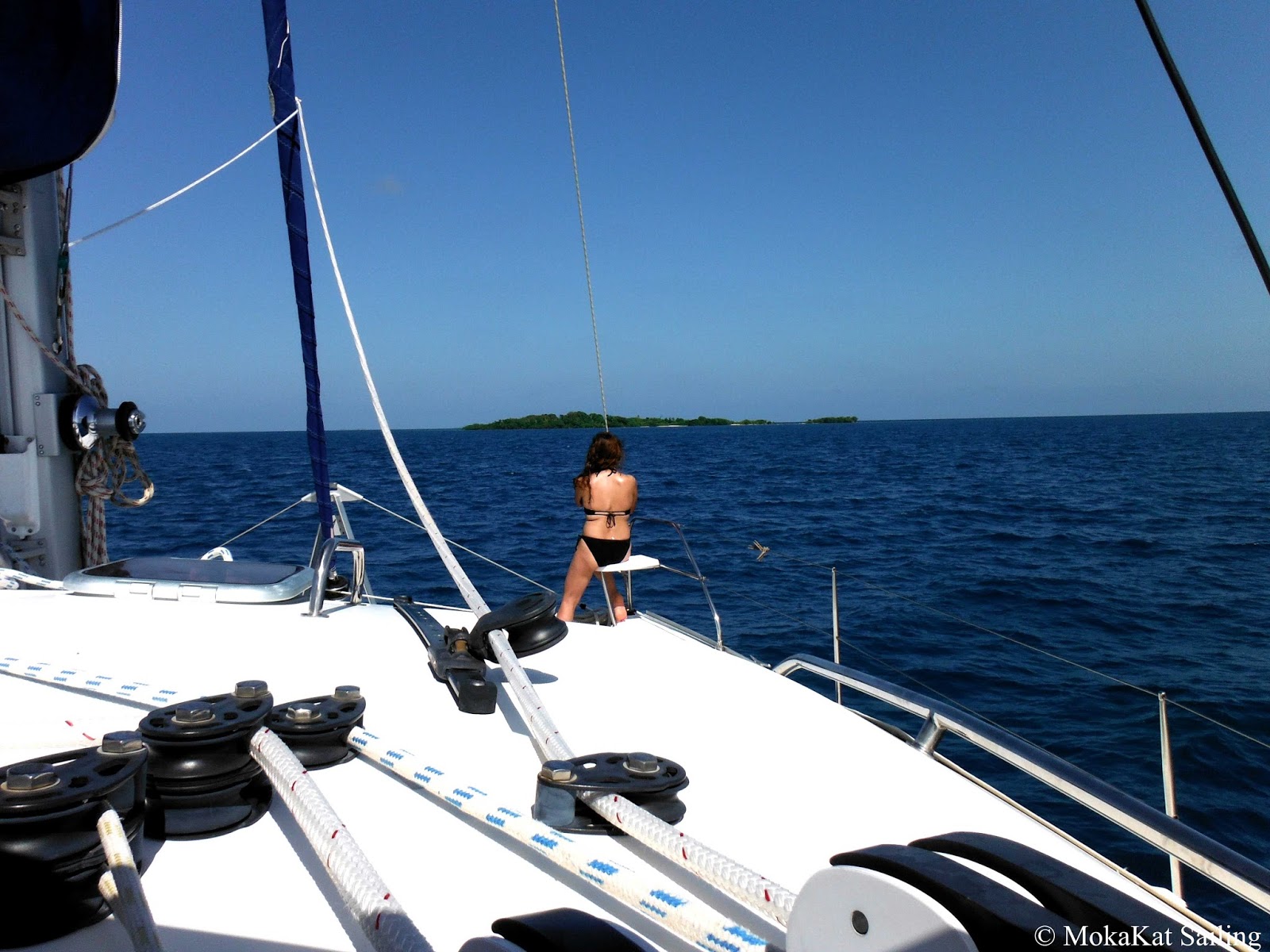 Watching out for dolphins, sharks, and pirates! 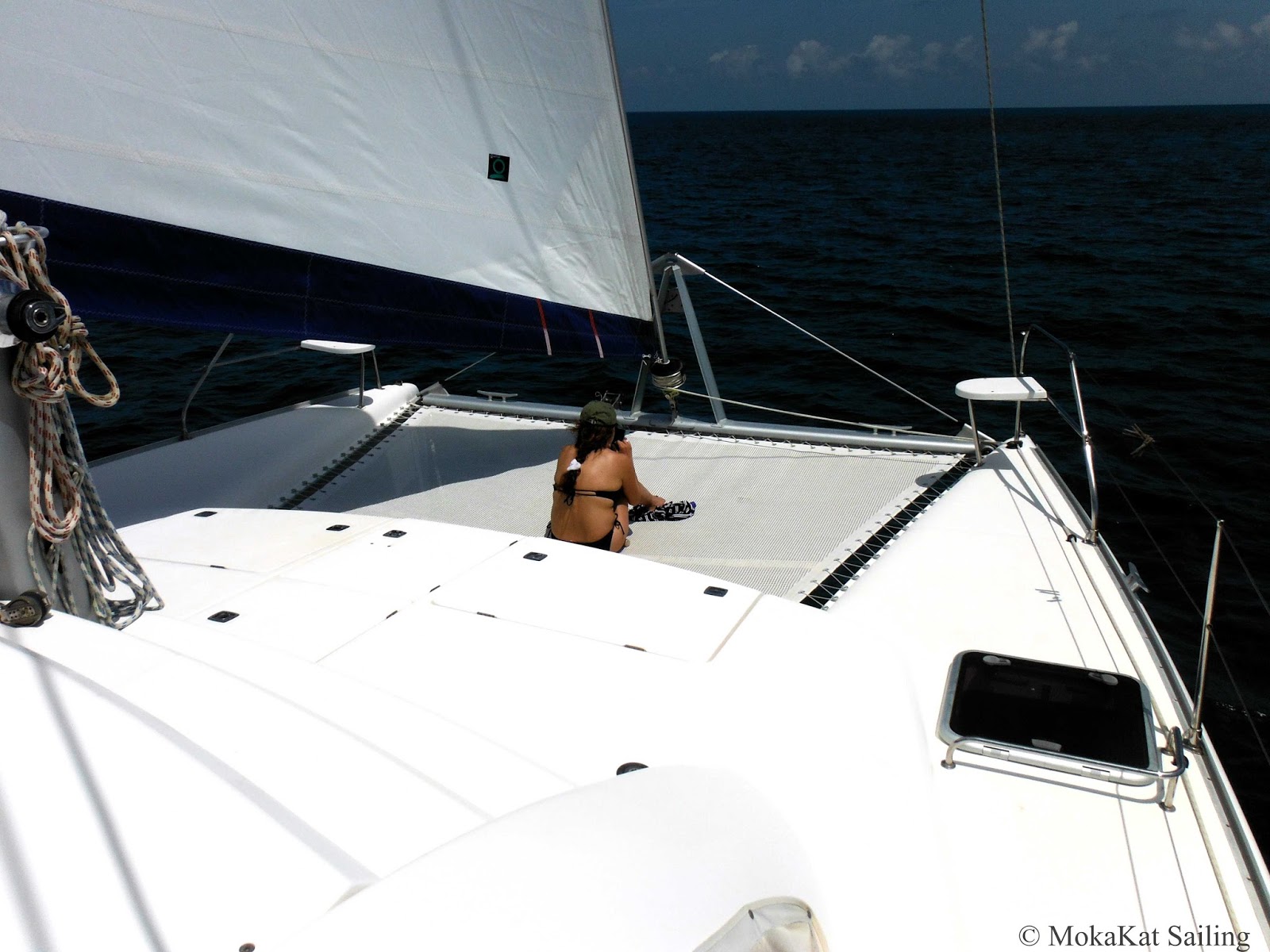 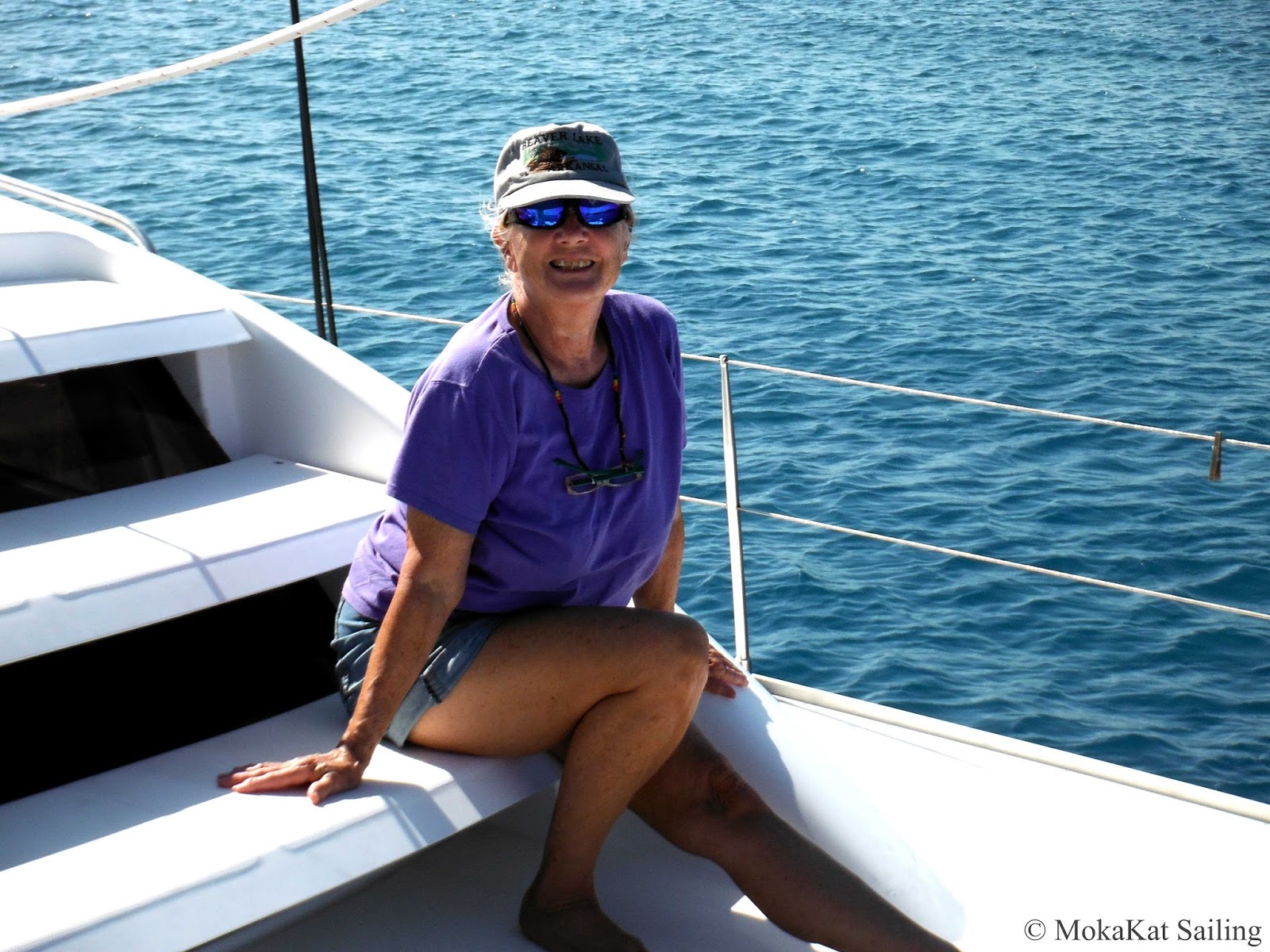 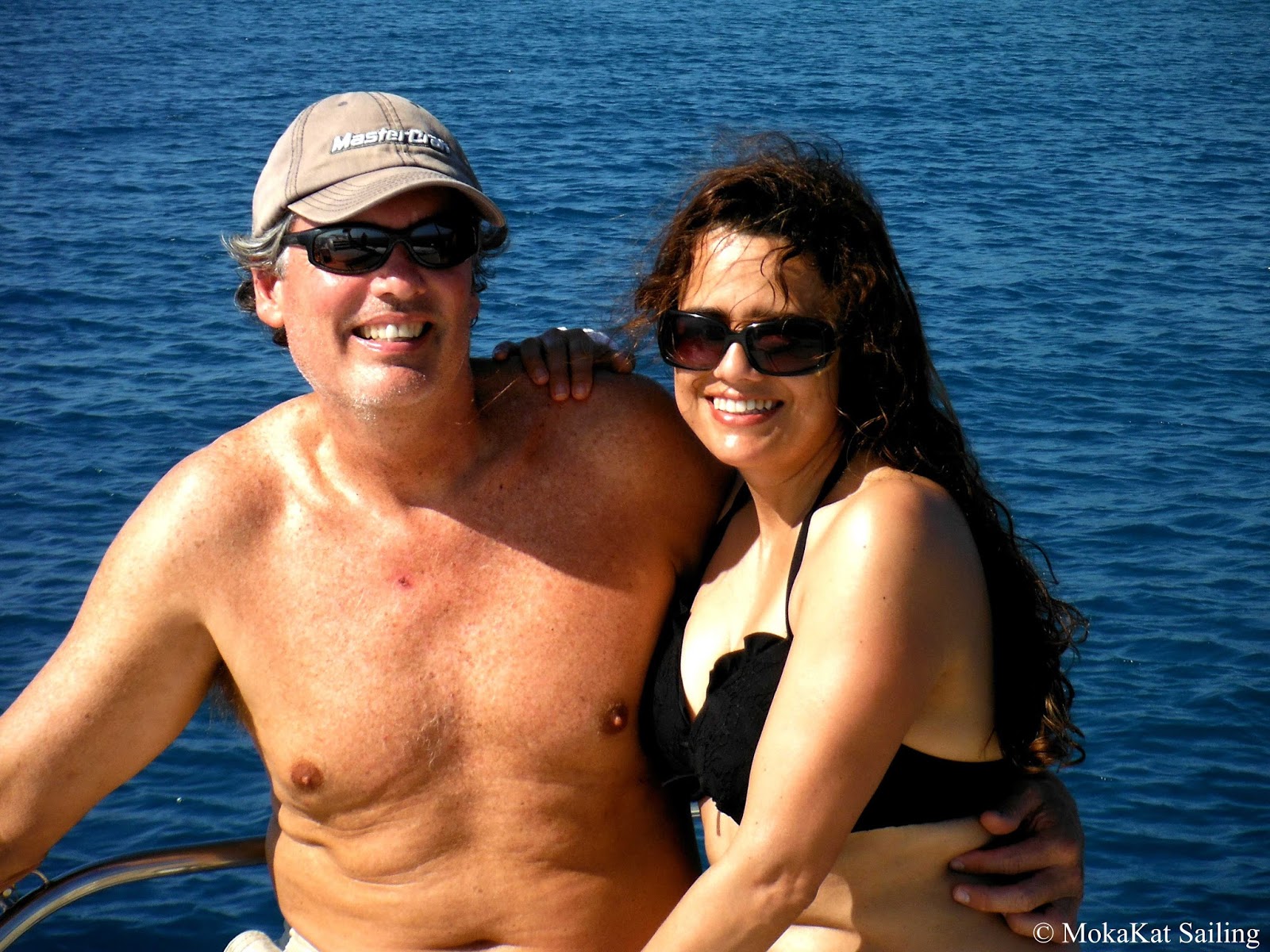 Dale and Maria Paula
We had an excellent sail and grabbed the lone mooring ball.  Maria Paula wanted to check out the island, so we took the dinghy over to the beach and walked around a little. Maria Paula with MokaKat in the distance
After our exploring the island, we then grabbed our snorkel equipment and headed over to the north side of the island, where we enjoyed some good snorkeling last time with Nick and Silke. 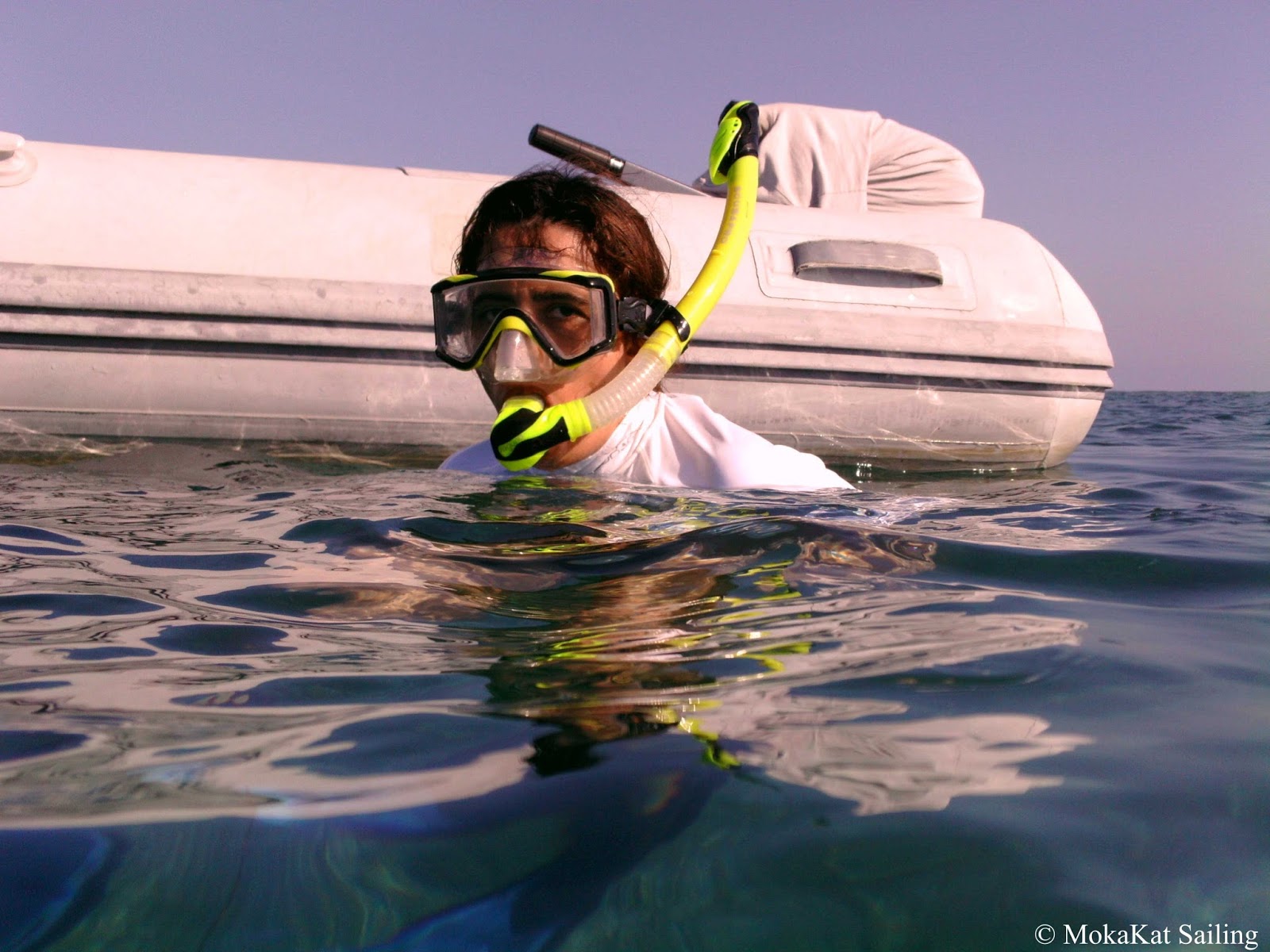 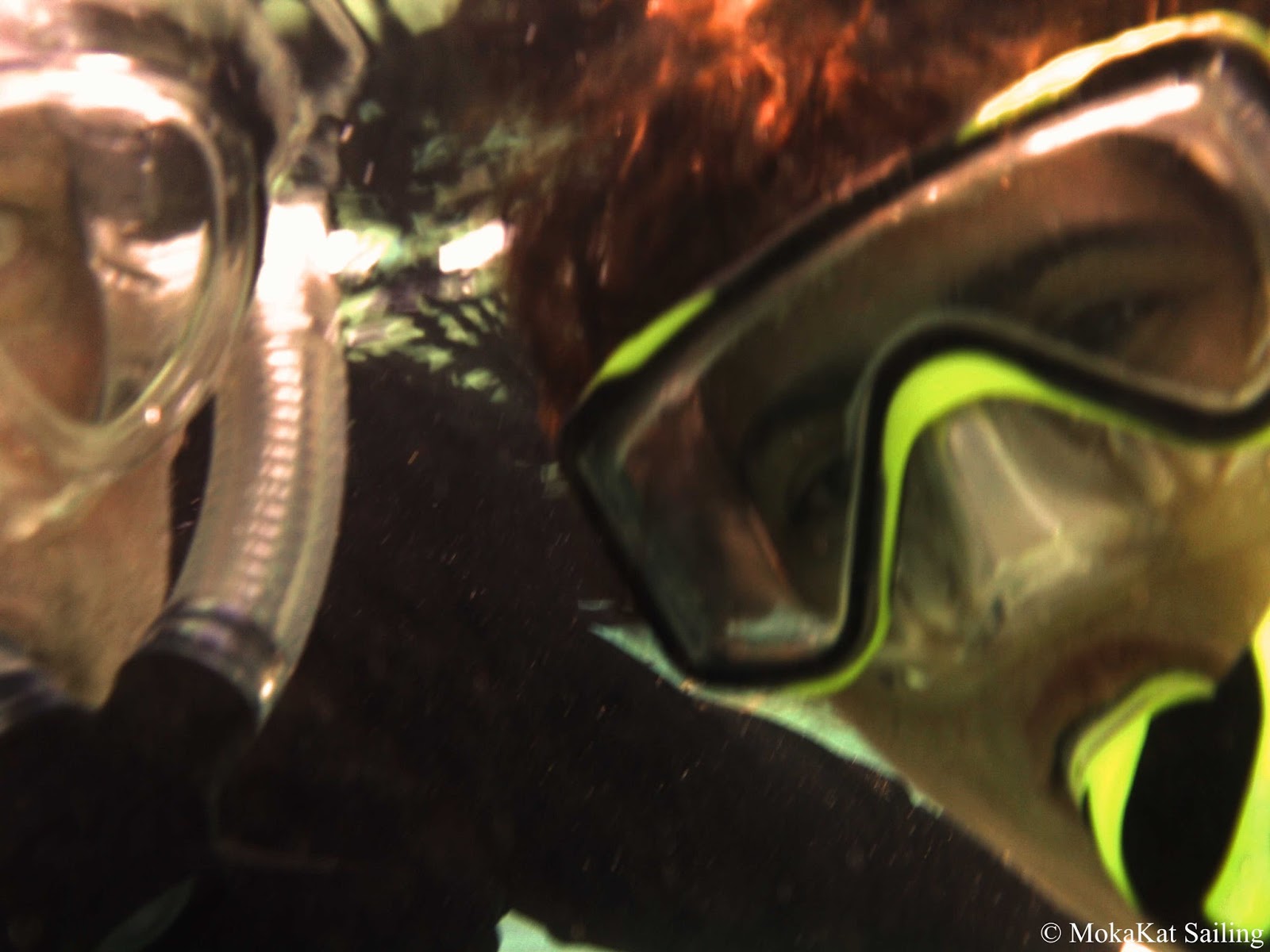 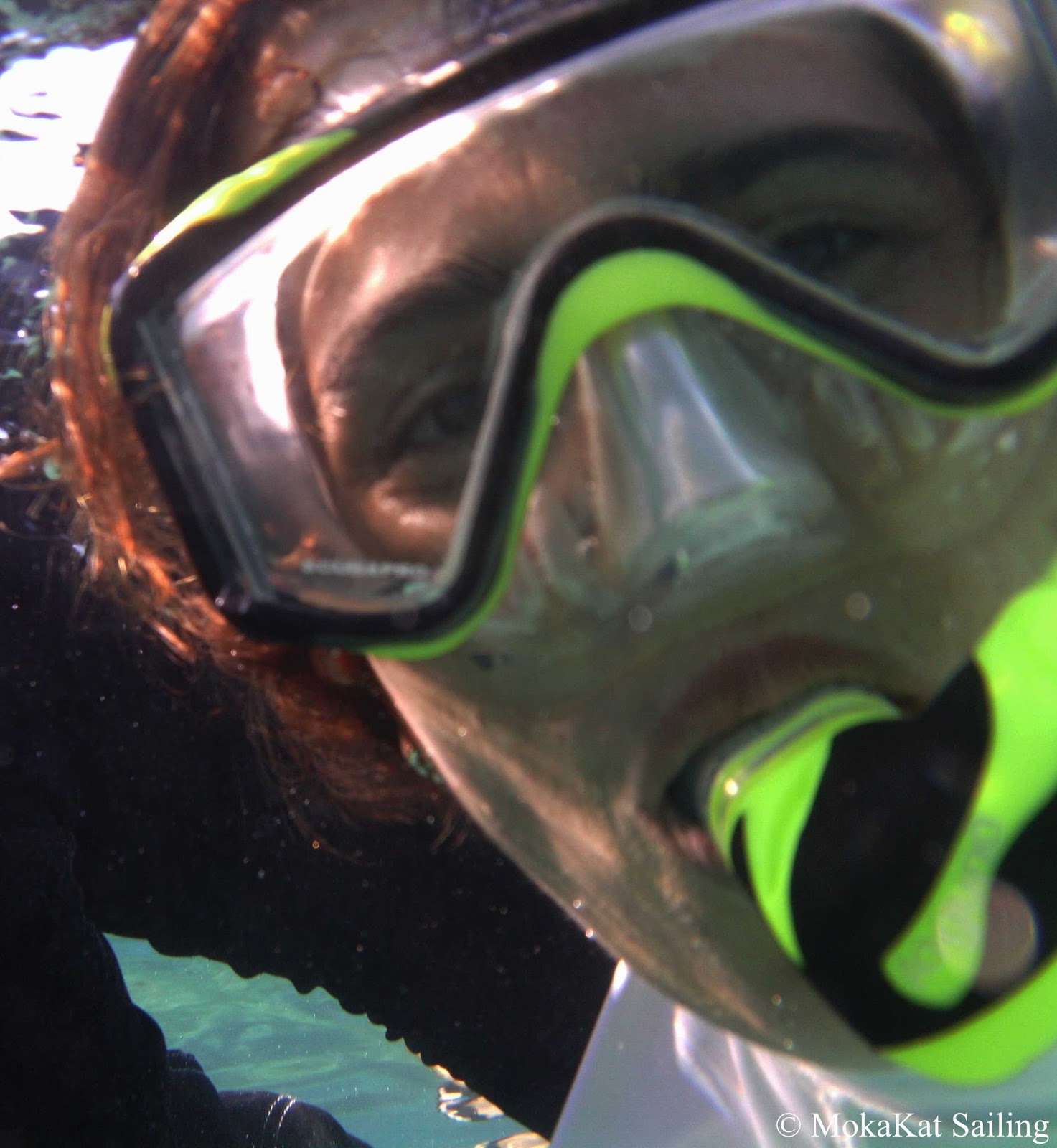 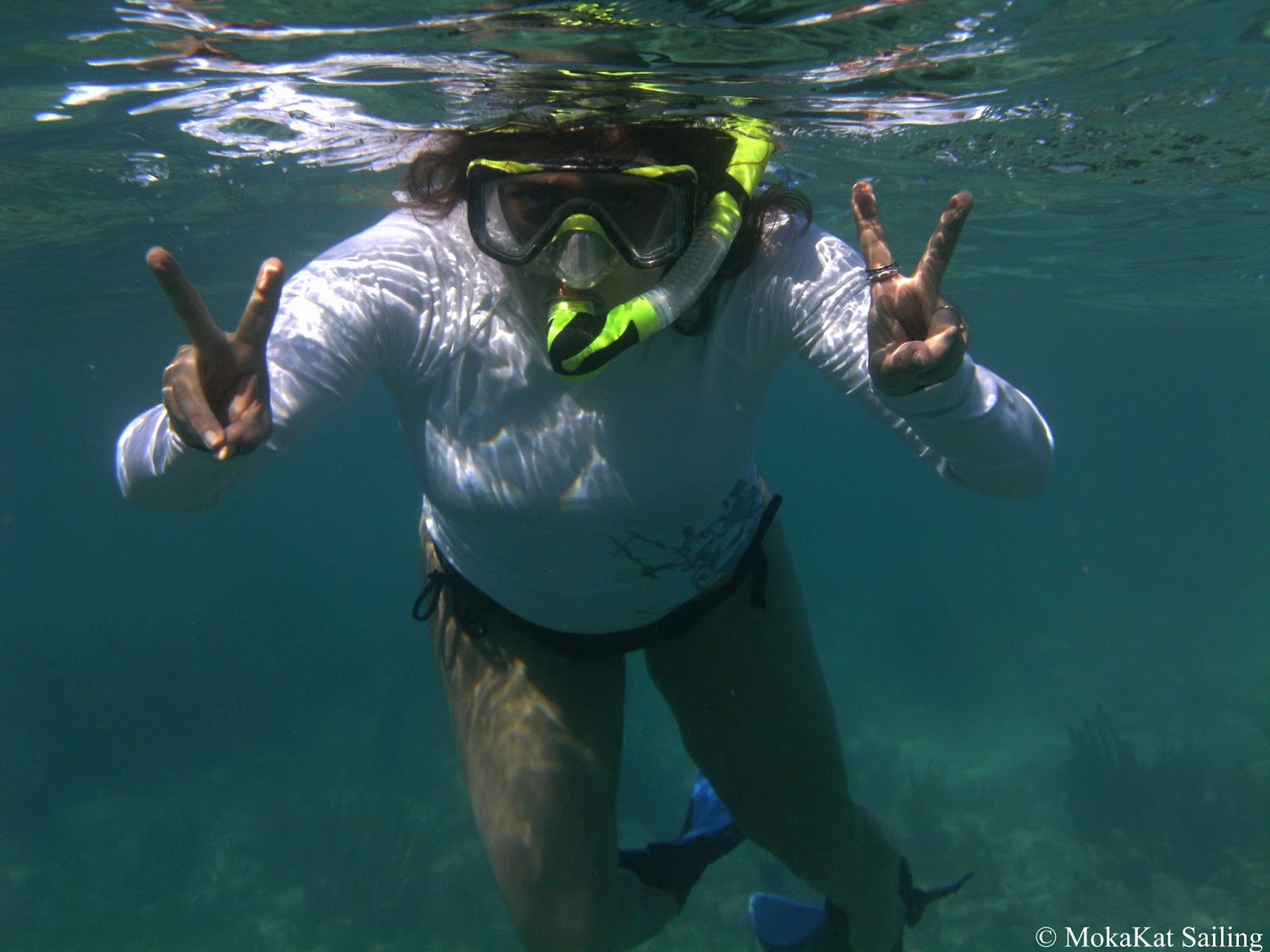 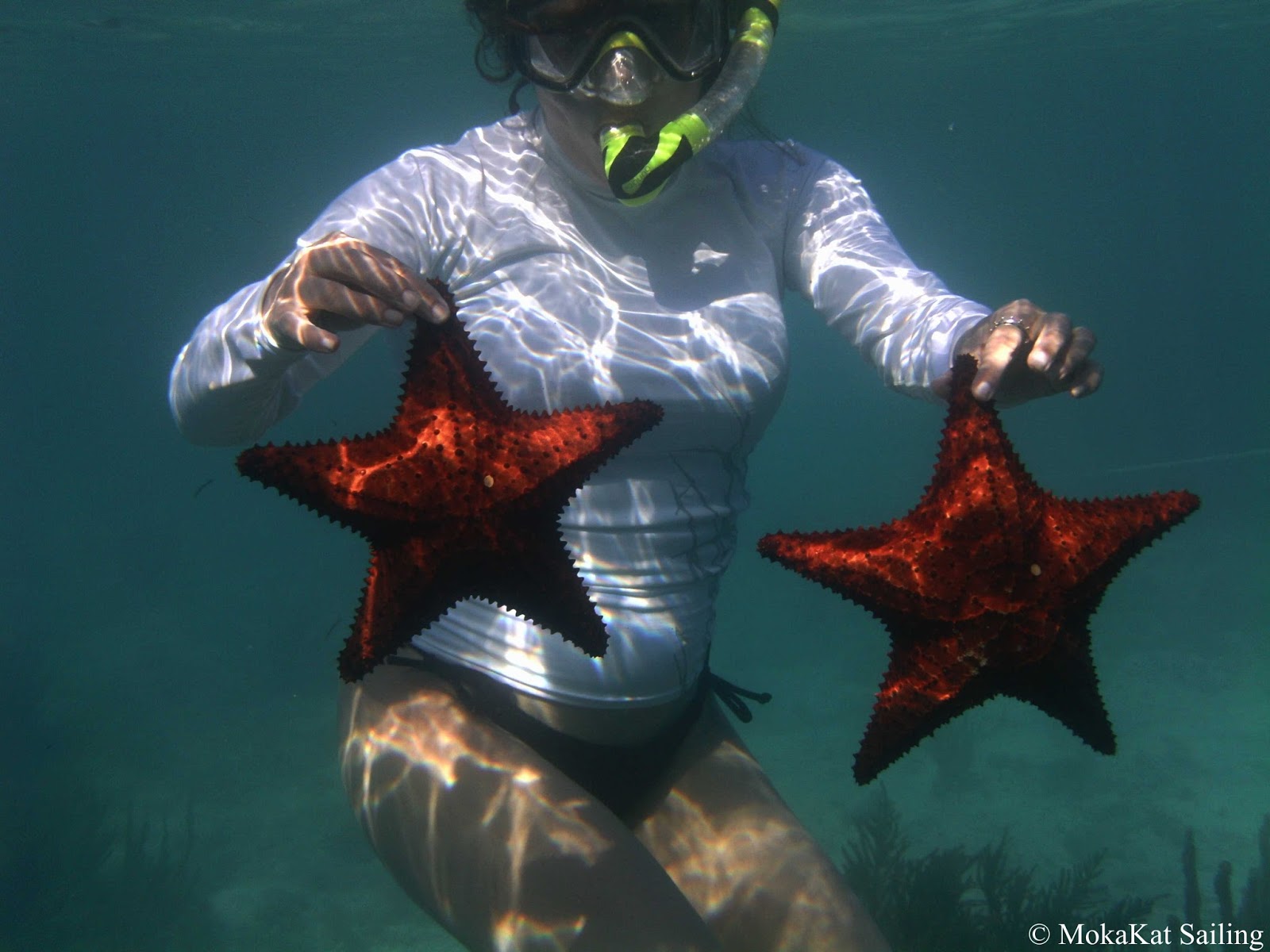 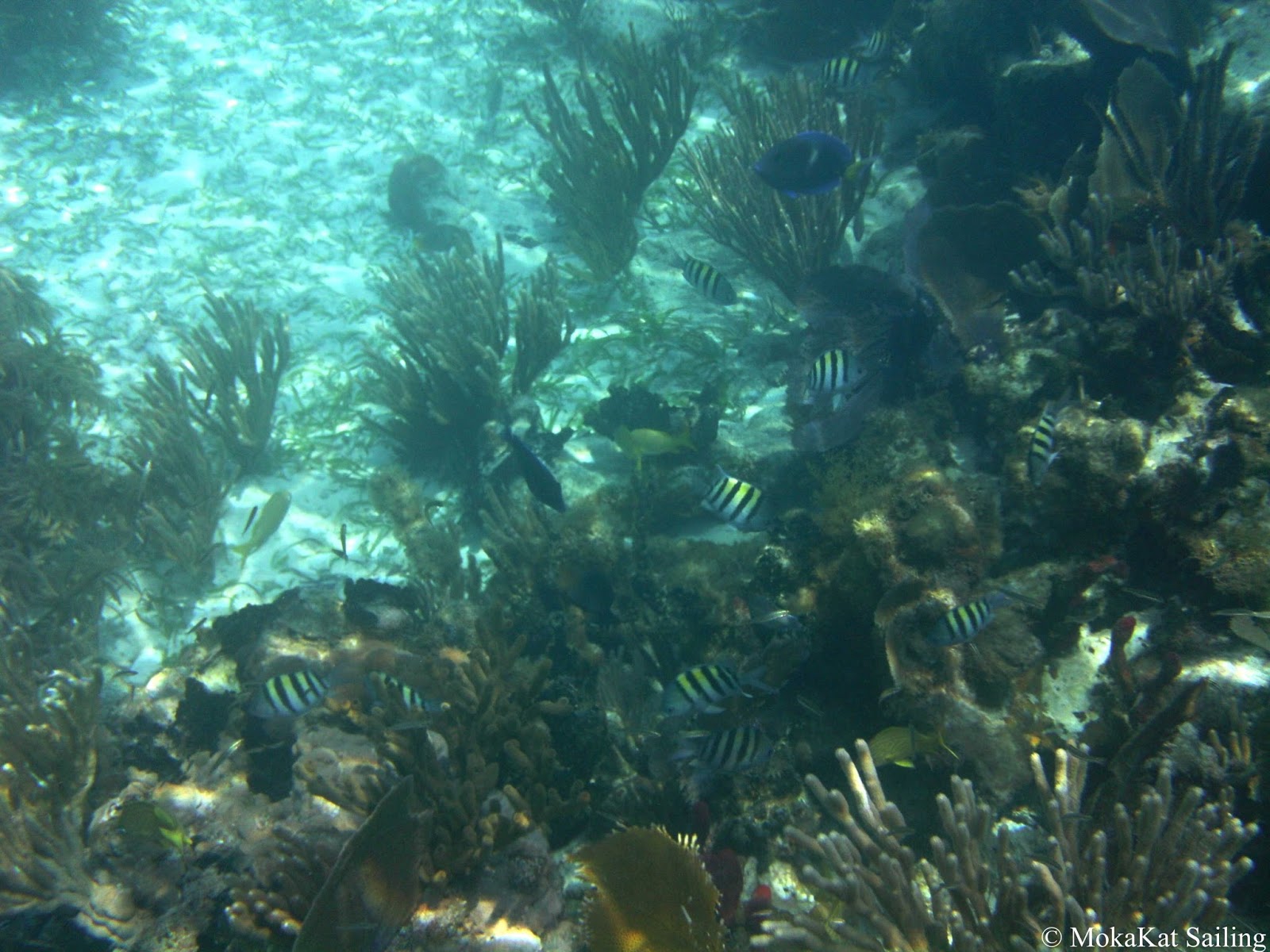 We saw amazing amount of beautiful tropical fish and a couple of barracudas.  We picked up a couple of starfish for a photo, but gently returned them to the bottom!  The tide was a little strong, so I pulled the dinghy behind me, and we let the current push us back to the boat.  The girls didn't like when we passed over the deep water, as you couldn't see the bottom and whatever was lurking below!  We had a great snorkel and then enjoyed a nice sunset and dinner. 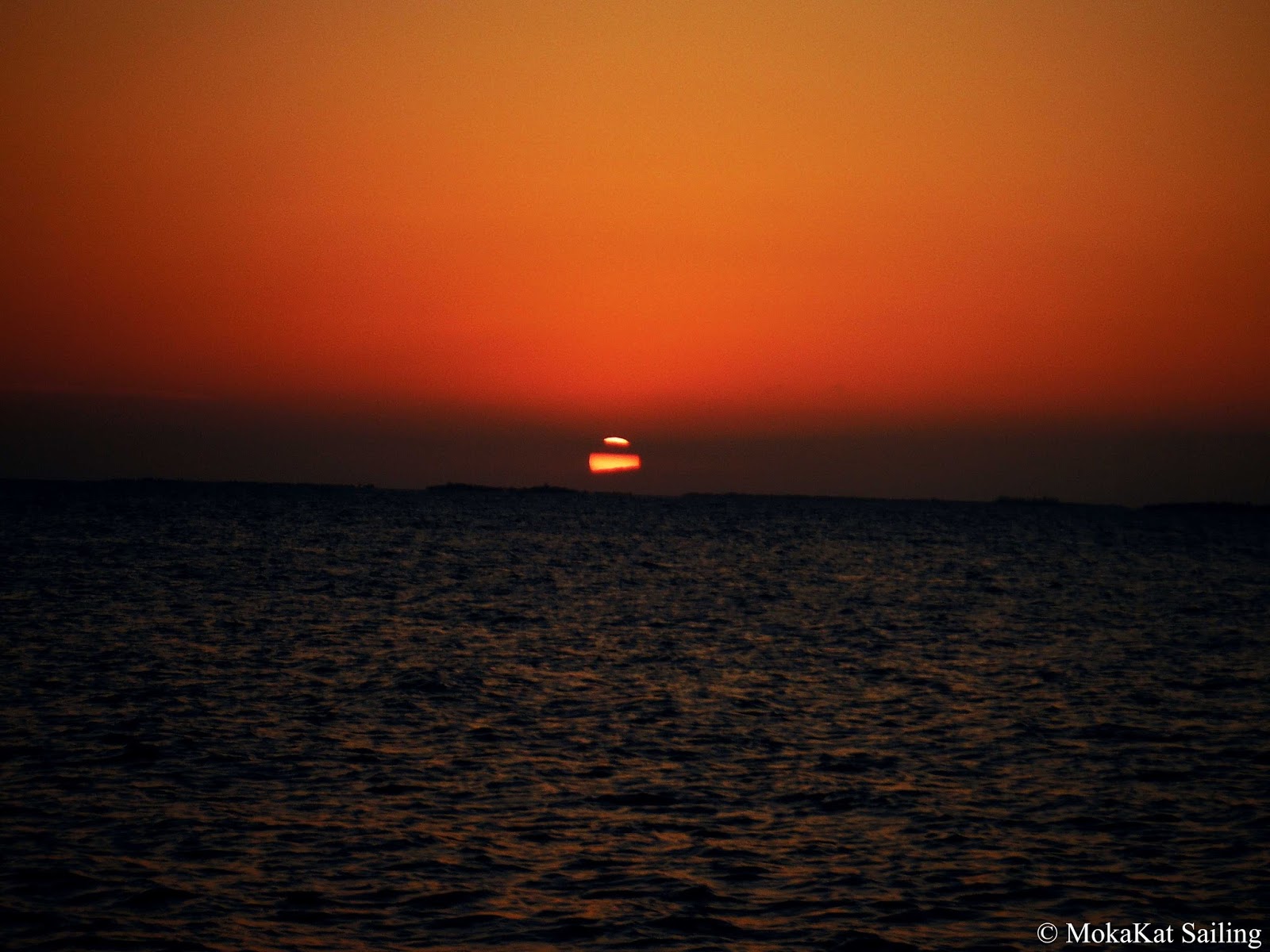 Sunset on Cary Cay
This was a great start to Maria Paula's vacation on MokaKat!
Happy Sailing from MokaKat!!!
Posted by Unknown at 5:17 PM