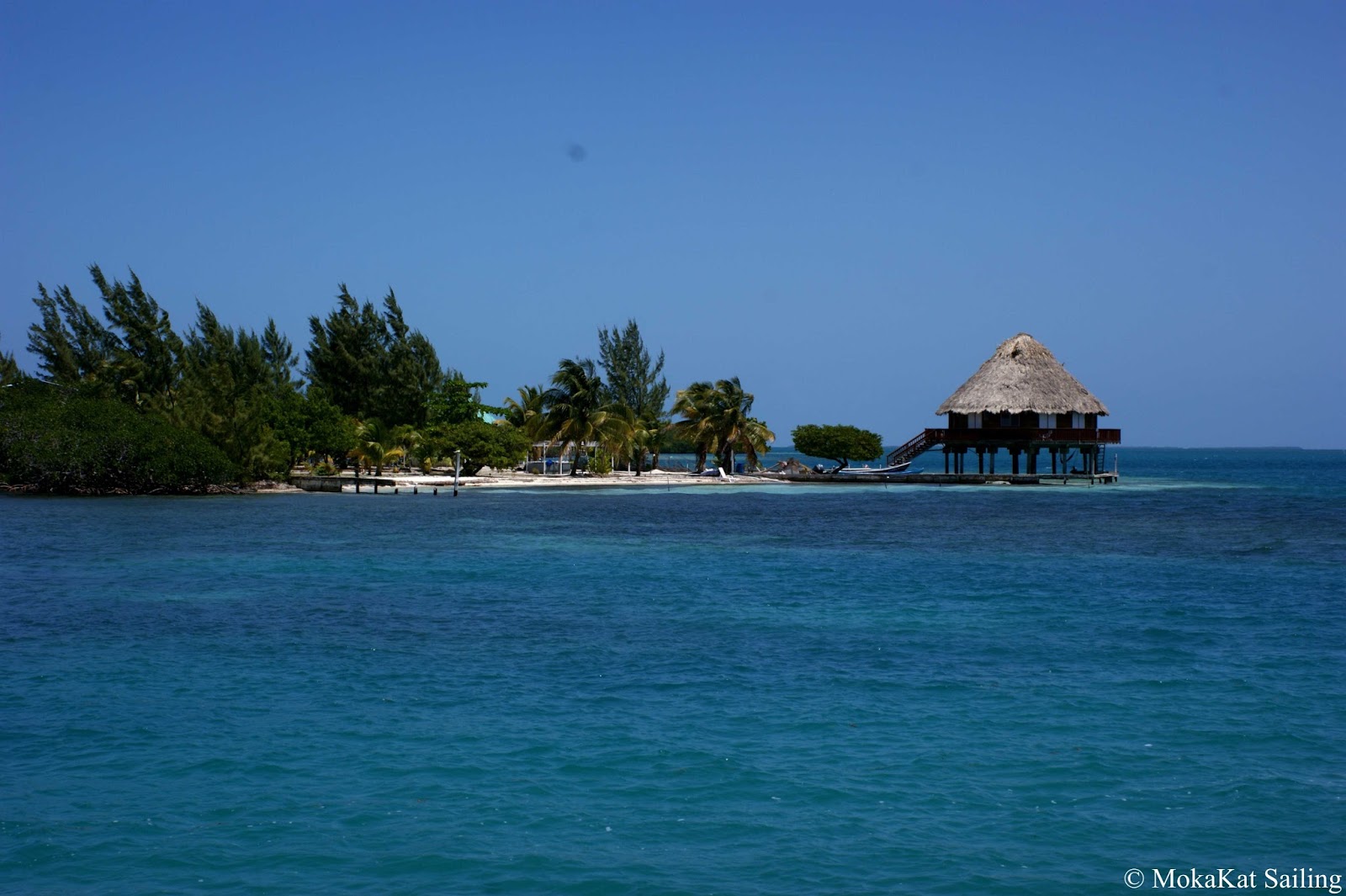 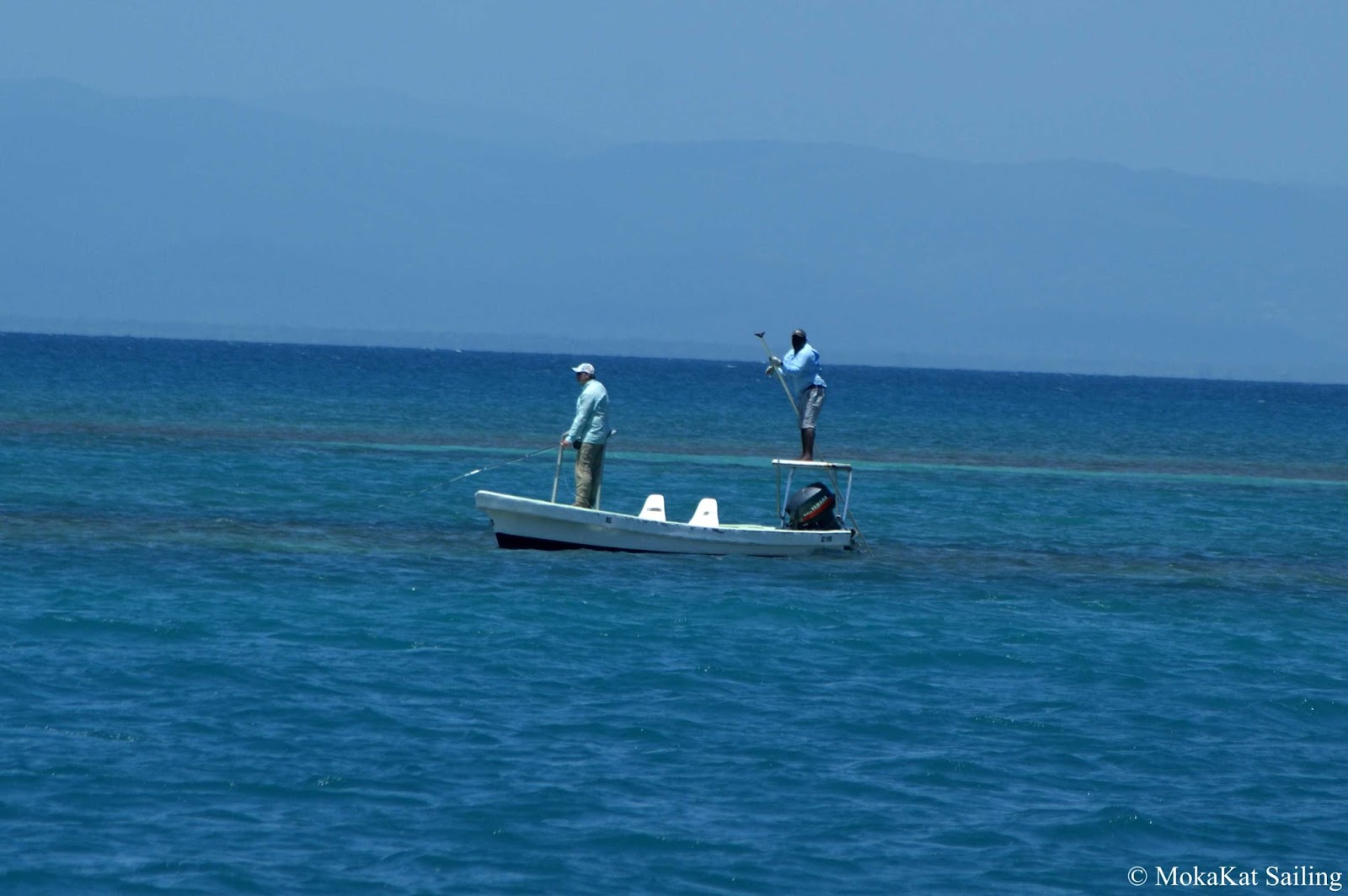 A fisherman fishing for bonefish with a local guide
We then passed Twin Cays, an all weather anchorage, that we stayed for one night back in November.  It is nice to have a safe all weather anchorage so close.  The water  between Blue Range Cays and South Water Caye is very shallow, so we were dodging coral reefs and watching for shallow spots.  Mom was on the bow directing me away from any dangers.  When we were almost to South Water Caye this power catamaran zoomed by us!  I think they were doing day trips out to dive or snorkel on the barrier reef. 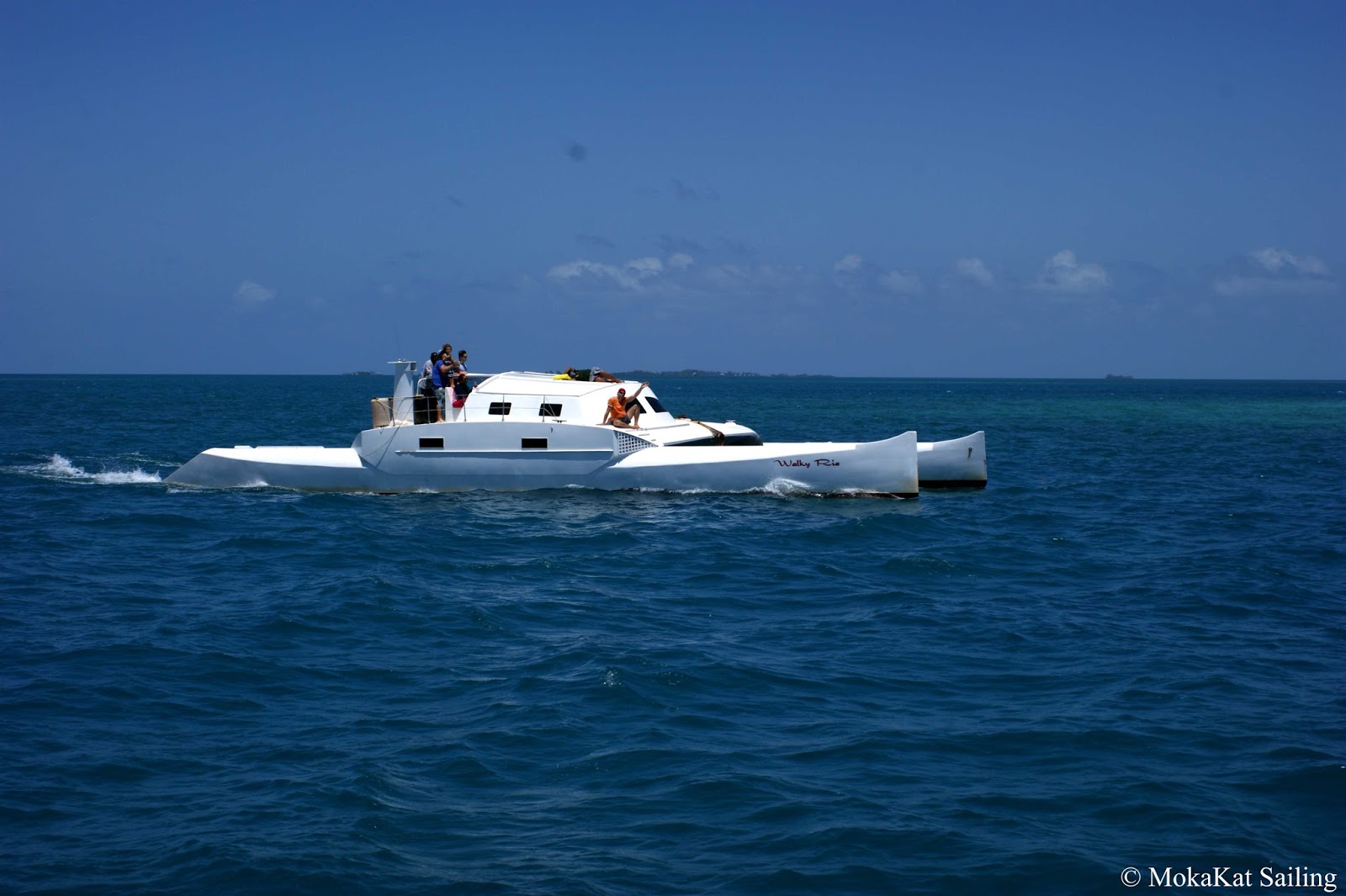 We finally arrived after a very nice sail!  We used our motors through the pass, but was able to keep the main flying the rest of the way.  There was two sailboats already anchored, so we anchored to the left, leaving plenty of room.  The water was very blue with the clear sand.  It reminded us of San Pedro, but without the boat wakes and craziness!  After anchoring, we enjoyed lunch and watched the activities and beauty of this cay. 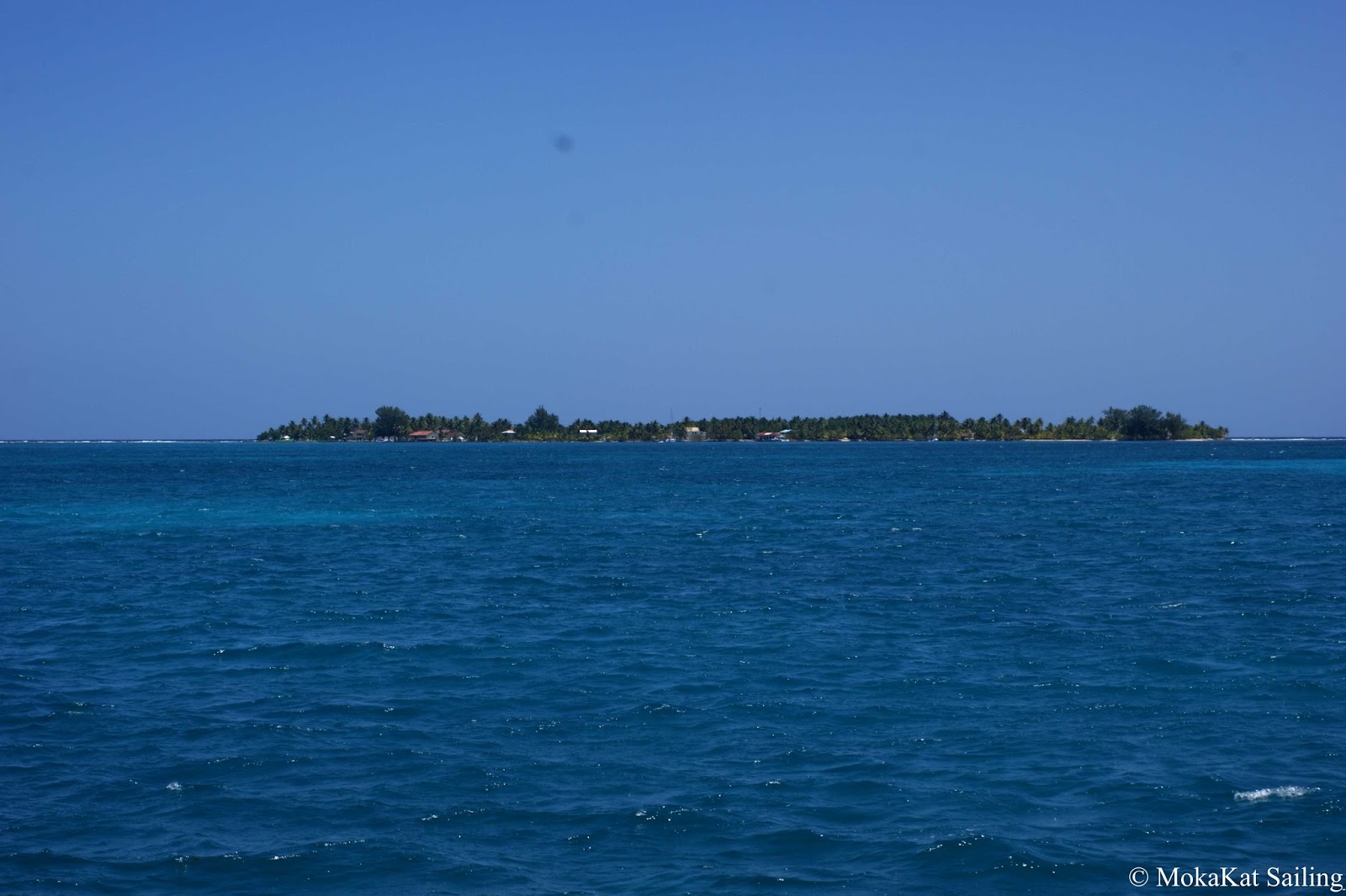 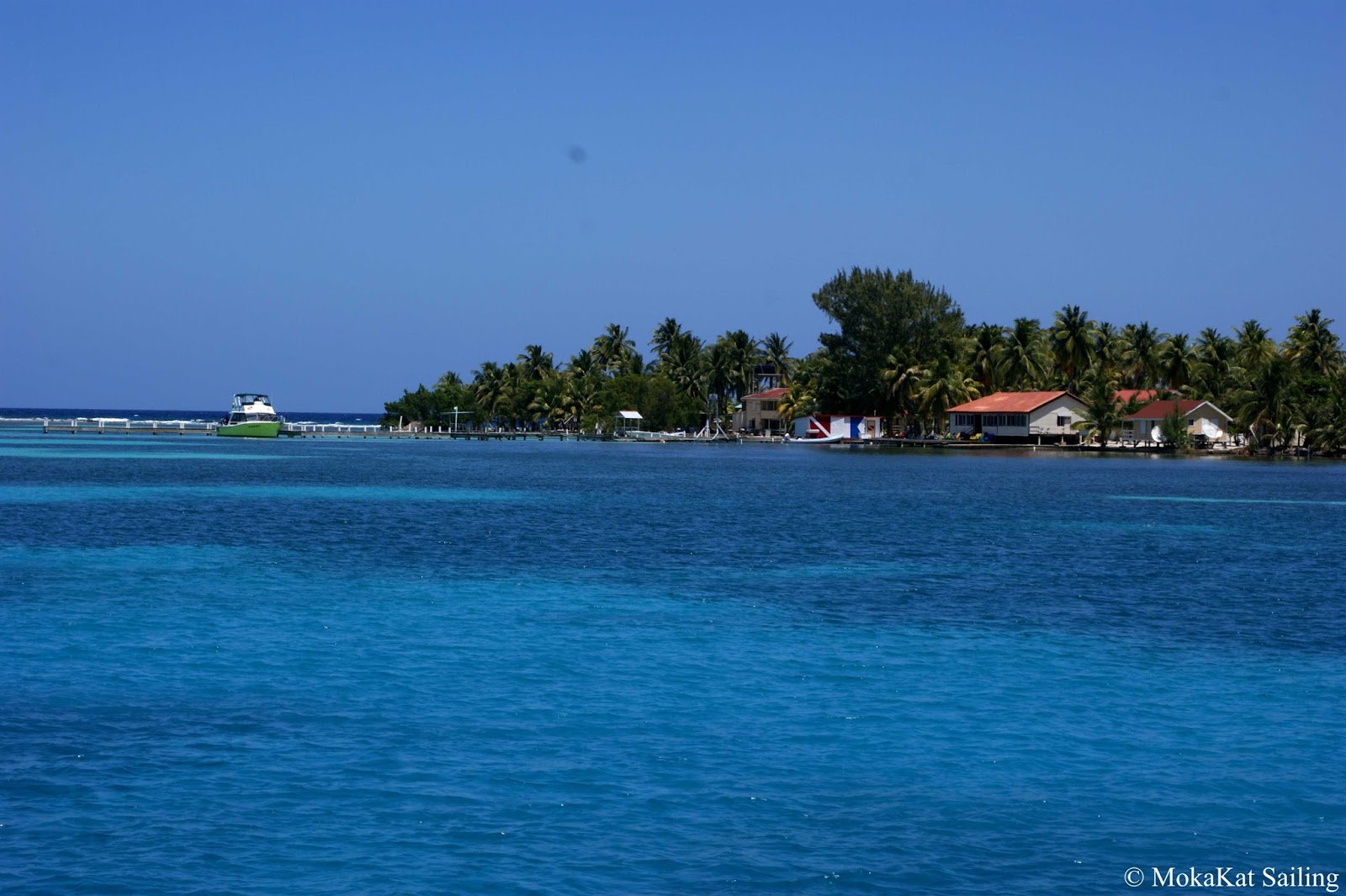 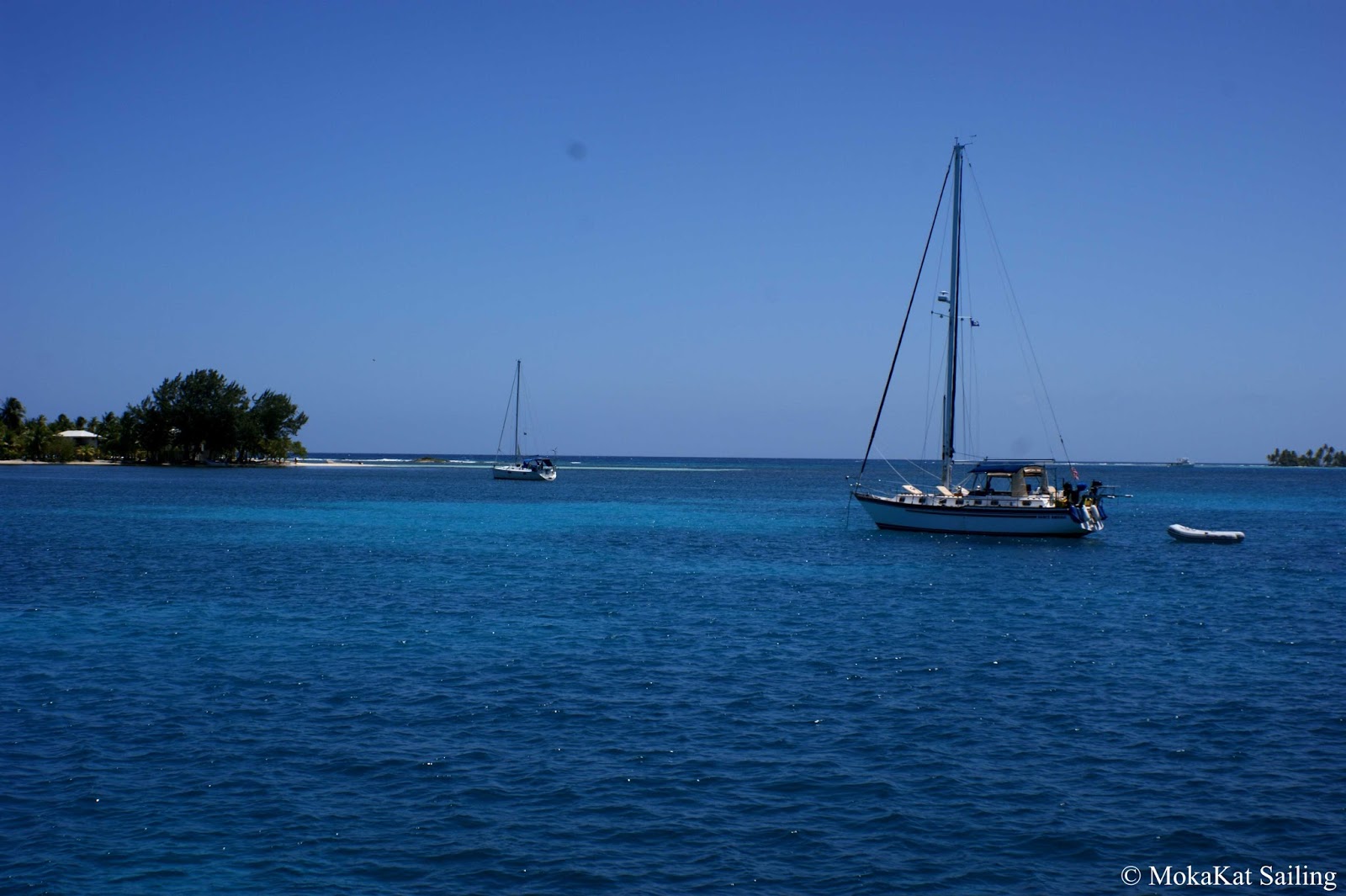 Our new friends Margaret and Rich on Dance Aweigh
Mike on Turning Point
After eating lunch, I was day dreaming, and looking back at the clear blue water.  For some reason, I noticed a little black spot on the horizon.  Thinking it could be a dolphin or something interesting, I grabbed the binoculars to check it out.  Instead of it being a floating coconut or weed line, it was a guy swimming around!  What????  The tourist are crazy to be swimming way out there!  I watched a little more concerned that this guy may be in trouble.  As a boat came in his direction, he started waving a kayak paddle to get their attention, but no one was noticing.  At that point, I realize that this guy was in trouble and needed some help.
I dropped the dinghy and had mom spot the guy for me.  He was hard to see, as we lost him in the waves.  Once I started heading in his direction, he started waving the paddle.  You could almost see the relief, as I waved back and headed in his direction.  As I pulled up close, I realized that this was a local and not a tourist.  I was a little nervous, as I didn't want this to be a scam and him just want to steal my dinghy or something.  After seeing him, I could tell that he was confused and disoriented, really in need of some help.  His hand was bleeding a little too, and I was glad there wasn't any sharks around.  I managed to help him climb into my dinghy, so that he could relax.  He was on a kayak that had capsized and was full of water.  It looked like the little flotation was barely keeping the kayak afloat.  He said that he had been in the water for 4 hours, and he was very happy to see me!  We both said that God must have been watching over him for me to see him so far out to sea.  I then used my dinghy bailer to bail out the water in the kayak.  This took about 15 minutes and mom, who was watching, was getting worried that something had happened to me.  Once I had the kayak empty of water I towed it toward the shore.  It turns out that this guy was a Rastaman, with dreads down past his waist, and very religious.  He was also very proud of his seamanship, and was totally embarrassed that he needed help from a gringo.  I explain that God helps in the ways that he sees fit, and not be worry that it was a gringo had helped him.  I still can't believe I actually saw him, as he was more than a mile offshore, someone was watching over him!  I excluded his name from this account, as I didn't want him to be more embarrassed.  I then took him to the kayak rental place, and he swam the kayak back to shore.  Later we met his wife, and she expressed her gratitude that we helped him out.  When you are at sea, you help your fellow seaman in anyway possible! 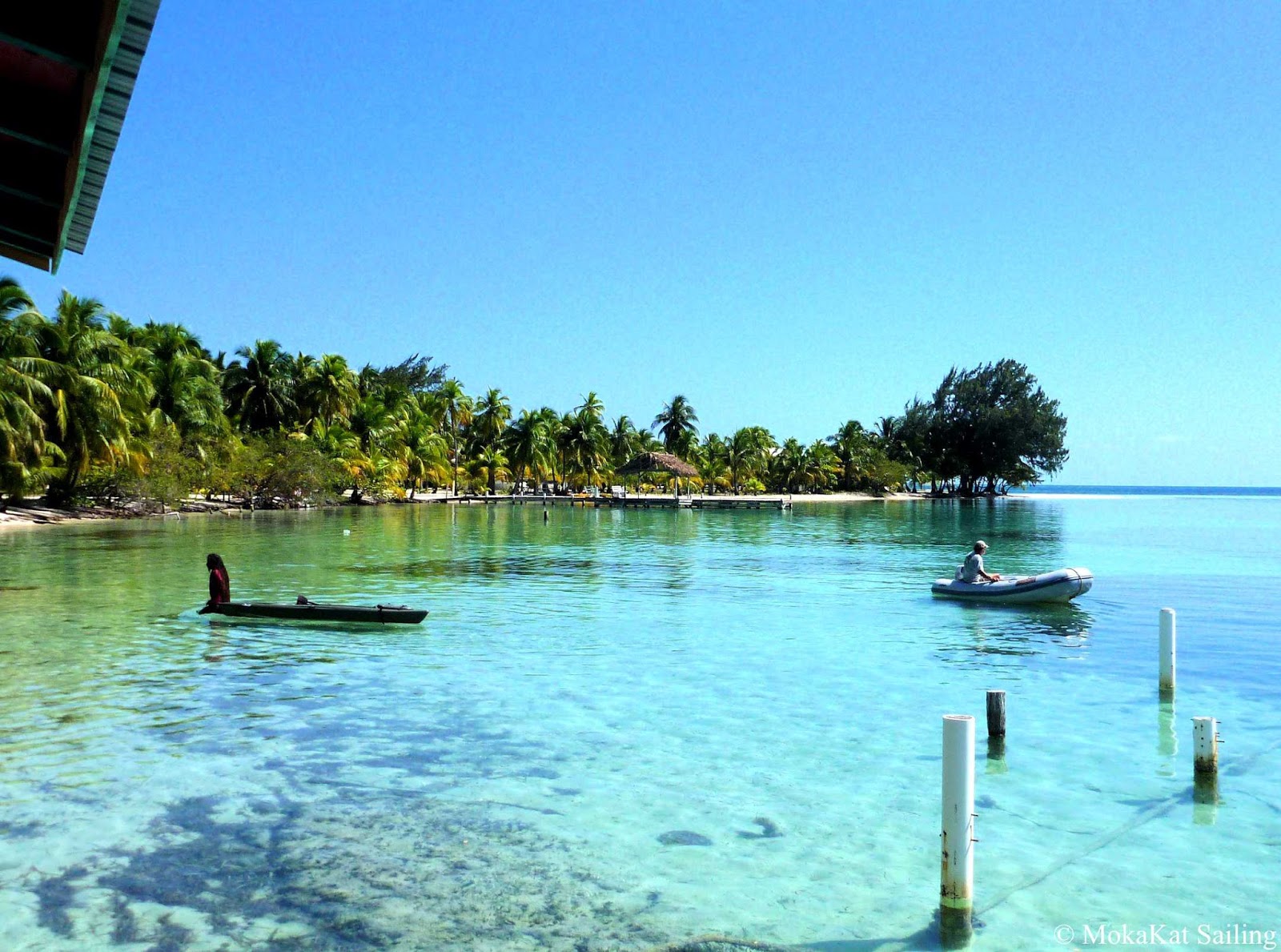 Picture of me and my new Rastaman friend parting
(picture courtesy of Margaret and Rich on Dance Aweigh)
Margaret and Rich came over to MokaKat in their dinghy and introduced themselves.  They had taken a photo of me bringing the Rastaman and kayak back to the dock.  I was very happy to have a photo of this event, as during the rescue, no one thought about taking photos!  They also said that the sailboat next to them was heading to Glovers Reef the next day, so we decided to head into shore around dinner time to see if we can tag along with them!
That night we headed into shore to locate the people on the other sailboat.  We met a couple, but the captain was in the other room on his laptop.  We sat down and started talking with them about their plans and where they were going.  The couple kept talking about Mike, their captain, so I headed into the next room to meet him.  I couldn't believe my eyes, but Mike was the guy that had his sailboat across from us at Mar Marine in Rio Dulce Guatemala!  We had helped each other out on a few boat projects.  I ran over and gave him a hug, while he was still trying to figure out who I was!  We then caught up on things and agreed to leave the next morning, early, to Glovers Reef.
We did leave the next day to Glovers Reef, and returned a couple days later.  When we returned, I was able to snorkel on the pass, taking a beautiful photo of a barracuda.  Unfortunately, my camera ran out of batteries after the single picture, and I was unable to take anymore pictures. 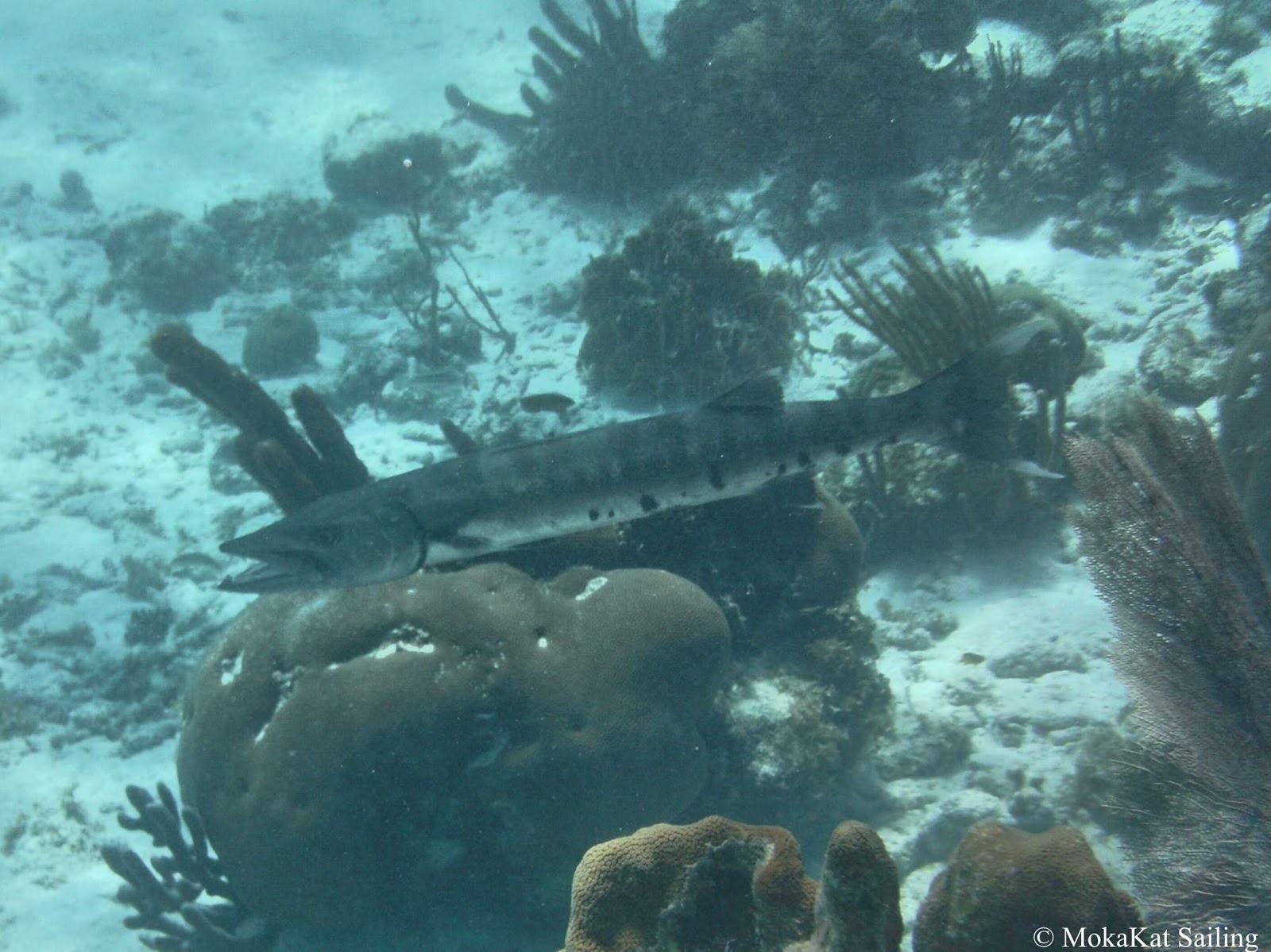 The nastiest, meanest, largest barracuda that I have seen!
There were strong winds predicted for a couple of days away.  We thought that we had a couple of days to stay at South Water Caye, but the wind hit a day early out there.  We watched a few local fisherman sail by at fast speeds, so we decided to pull up anchor and head back to Twin Cays, a safe weather anchorage. 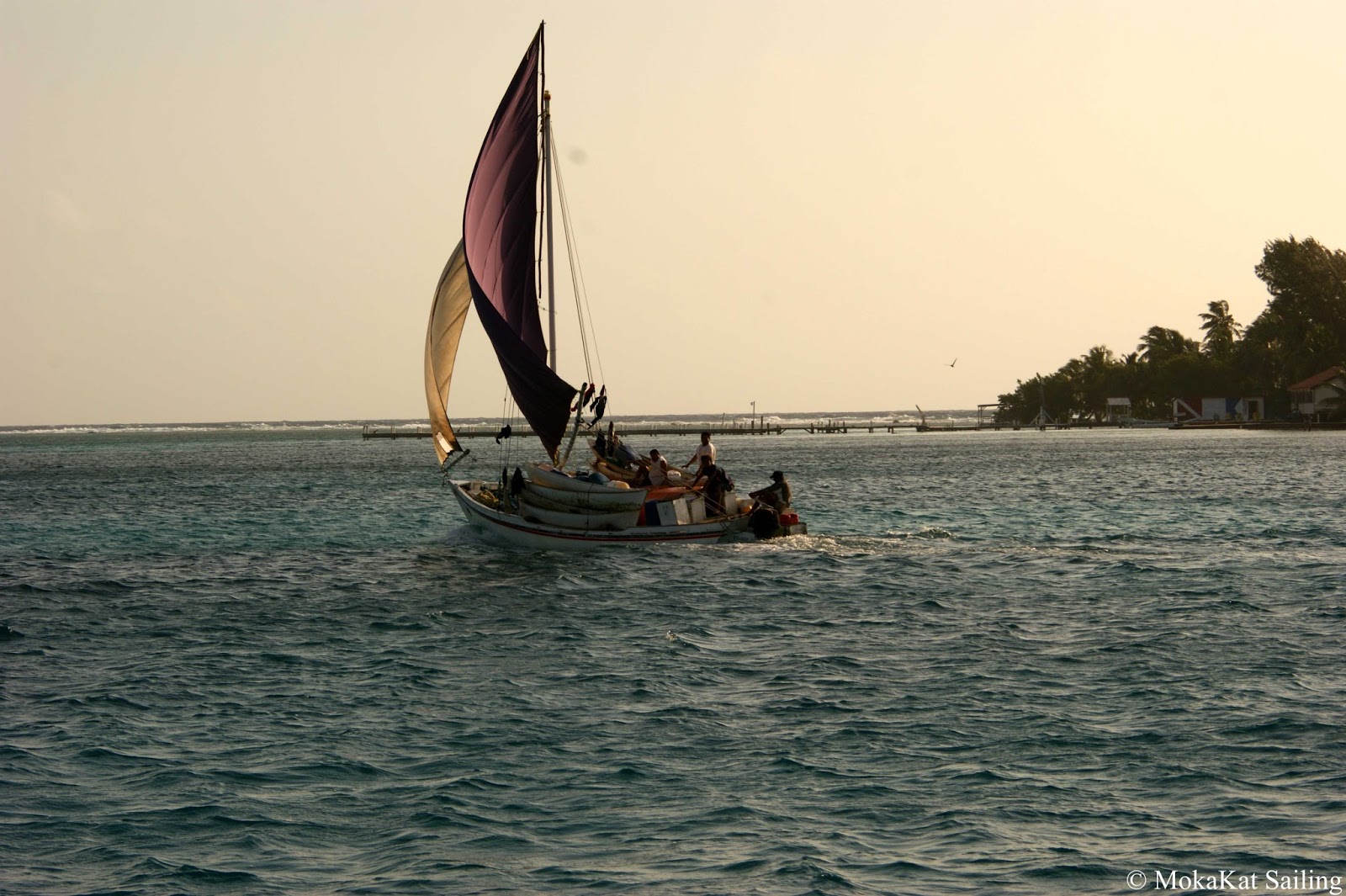 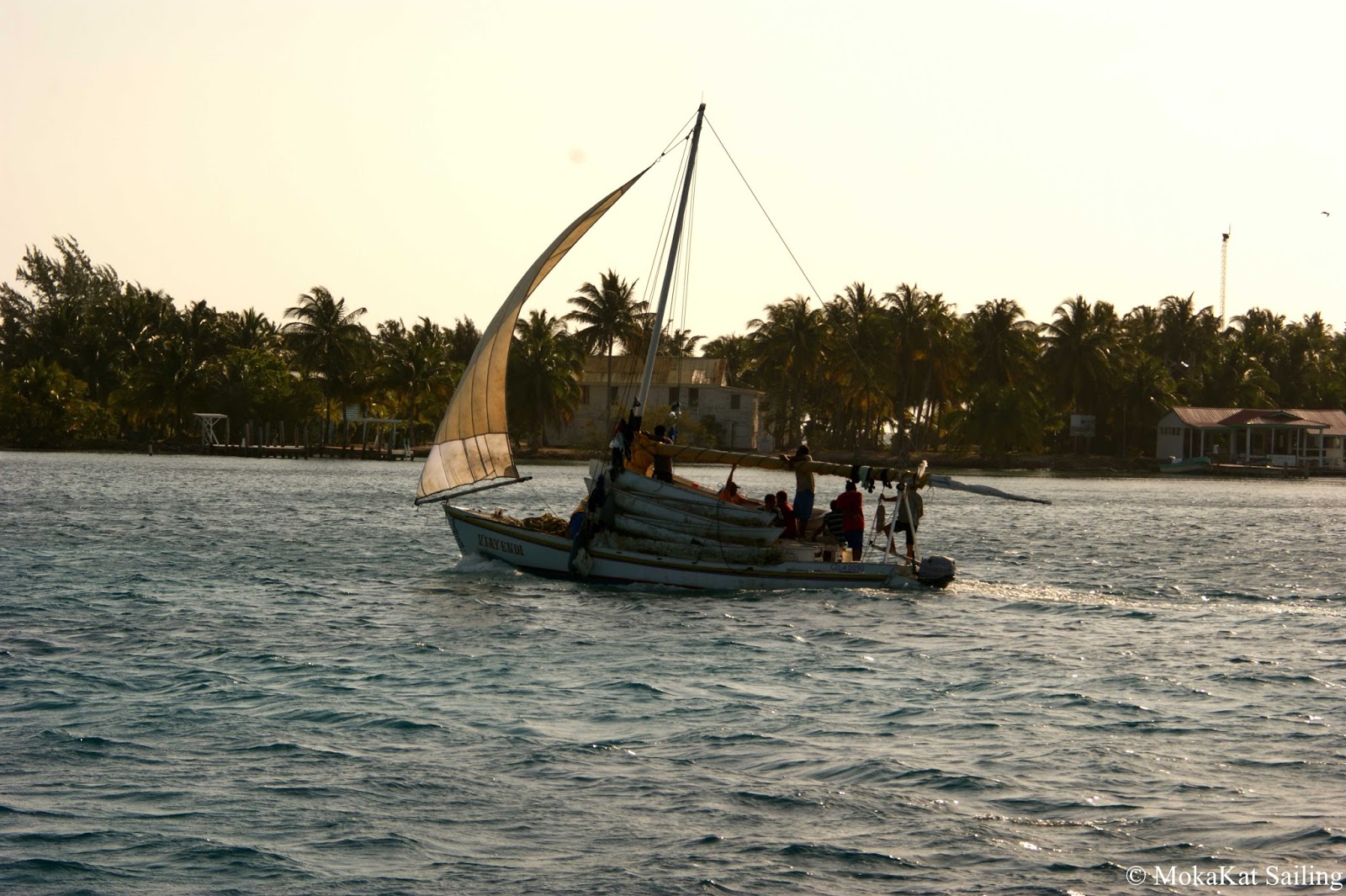 We stayed in Twin Cays one night before returning to Placencia Harbor.  The first day that we arrived, there was a tourist boat looking for manatees and asked if we saw any.  At that time we haven't seen any manatees anywhere around Twin Cays.  Within 5 minutes of them motoring on, a manatee surfaced just behind the boat!  I whistled at the tour boat, and they came zooming back over, catching a quick glimpse of one of the manatees.  We ended up seeing several of them, as the area quieted down from the boat engines. 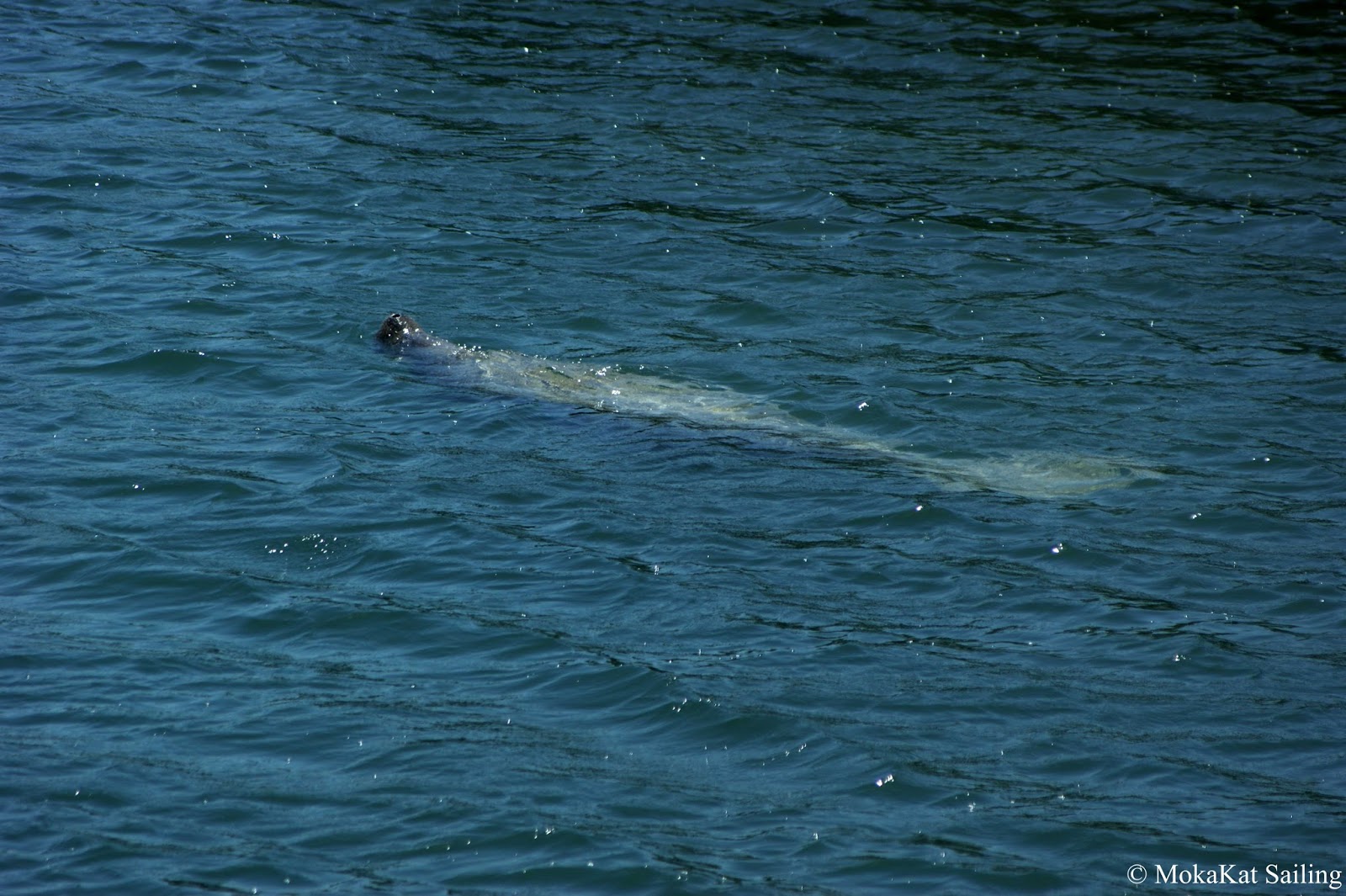 Happy Sailing from MokaKat!!!!
Posted by Unknown at 4:46 PM