After returning from Glover's Reef and South Water Caye, we stayed in the Placencia Harbor and got ready for Mike and Kathi's arrival.  (my sister and her husband) 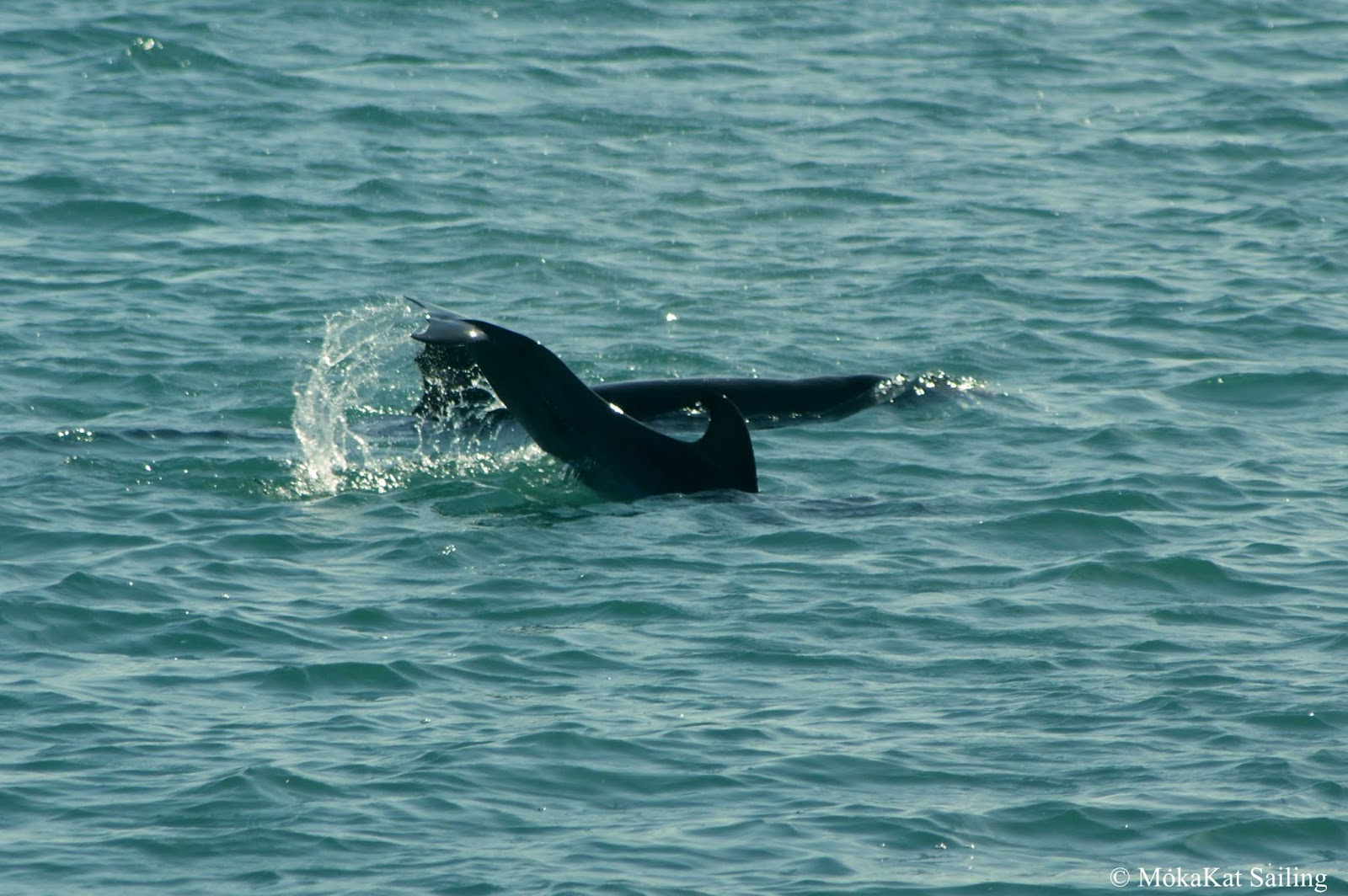 Dolphins playing in the harbor 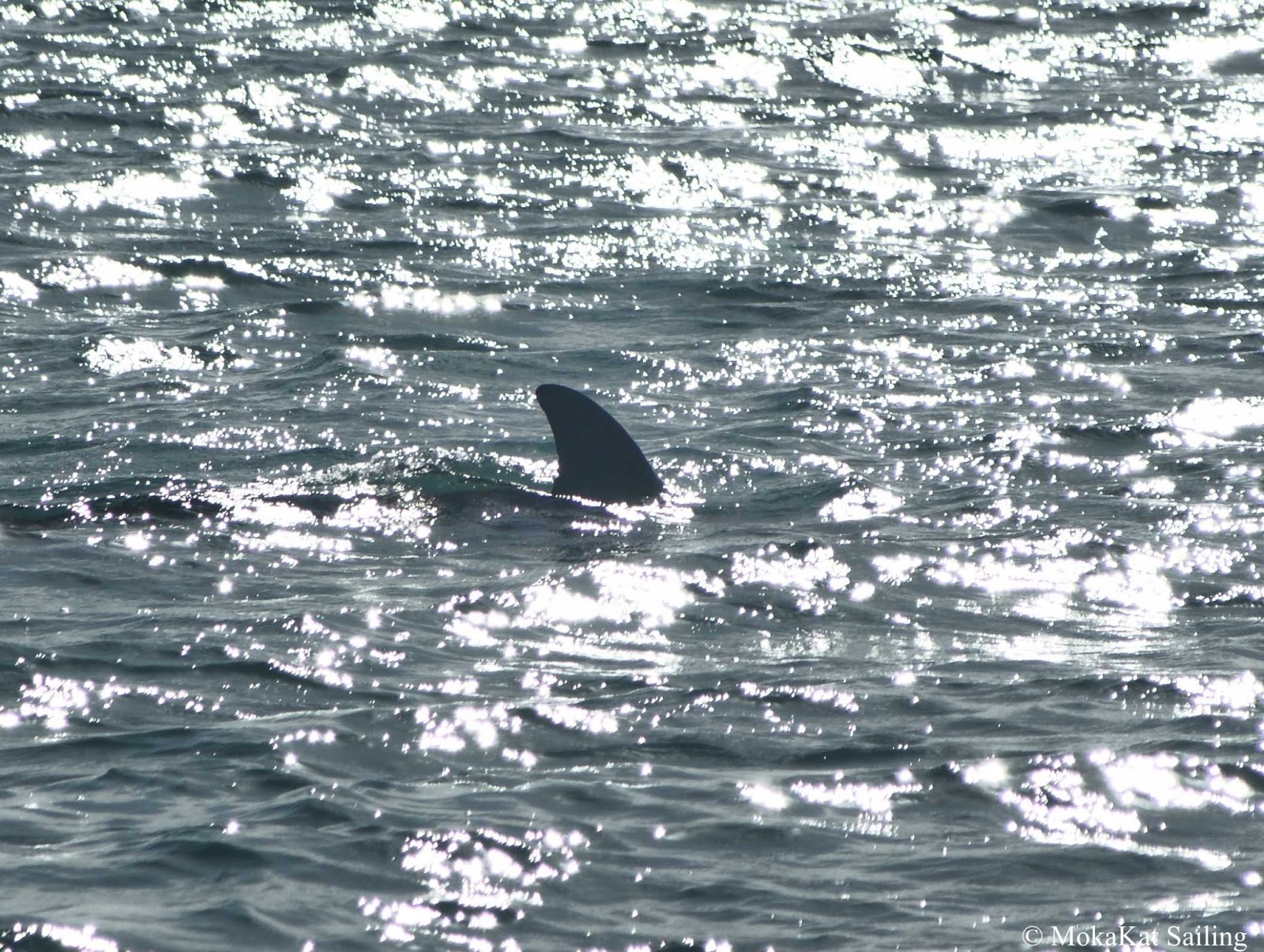 Shark or dolphin???....Dolphin!!!
We had several days to get ready, so it was many dinghy trips for drinks (3 cases of Coca Lite, 2 cases of beer, 1 case of Coke), and provisions (fruit and store goods).  We were wanting to be fully provisioned so that we could head out to Hatchet Caye in the morning after they arrived!
The other item that we needed was water.  The last time we hauled water in 1 gallon jugs from the Moorings Marina, and that was too much work.  Here in Placencia, they built a new municipal dock, and you can get water for 5 cents US a gallon!  We waited until a nice calm morning, and we headed into the dock.  It turned out to be pretty easy, and we filled all of our tanks and jugs! 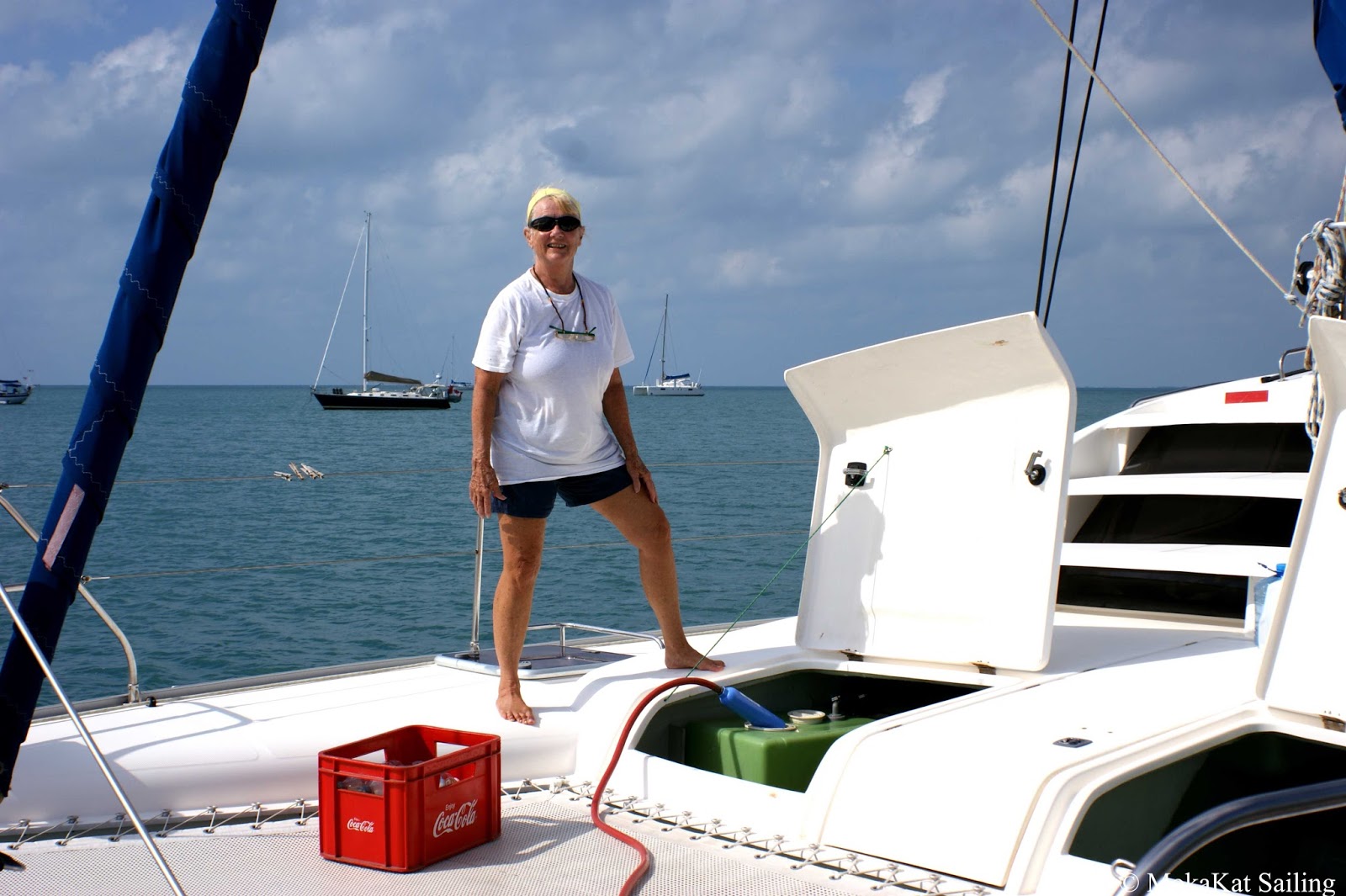 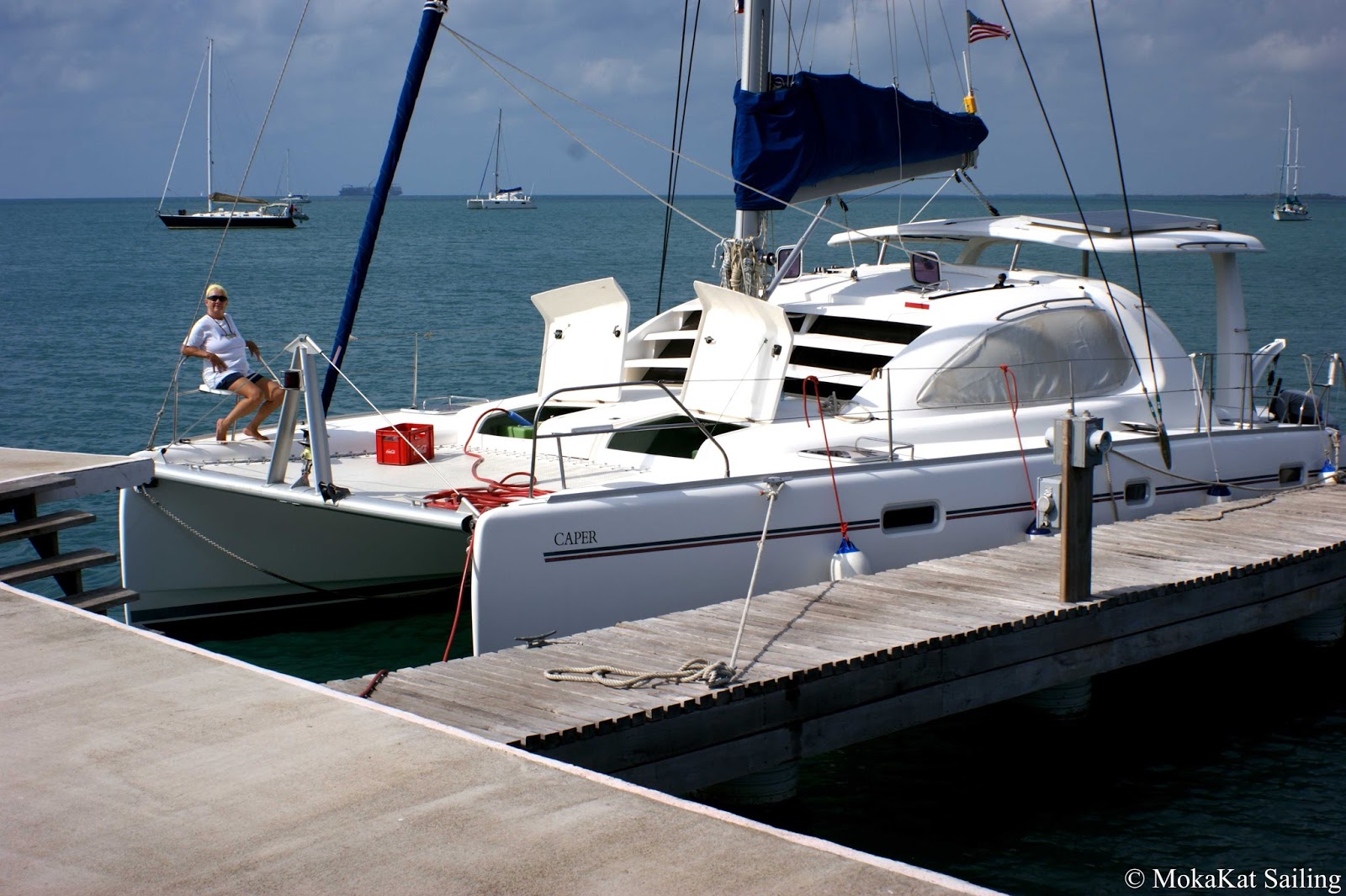 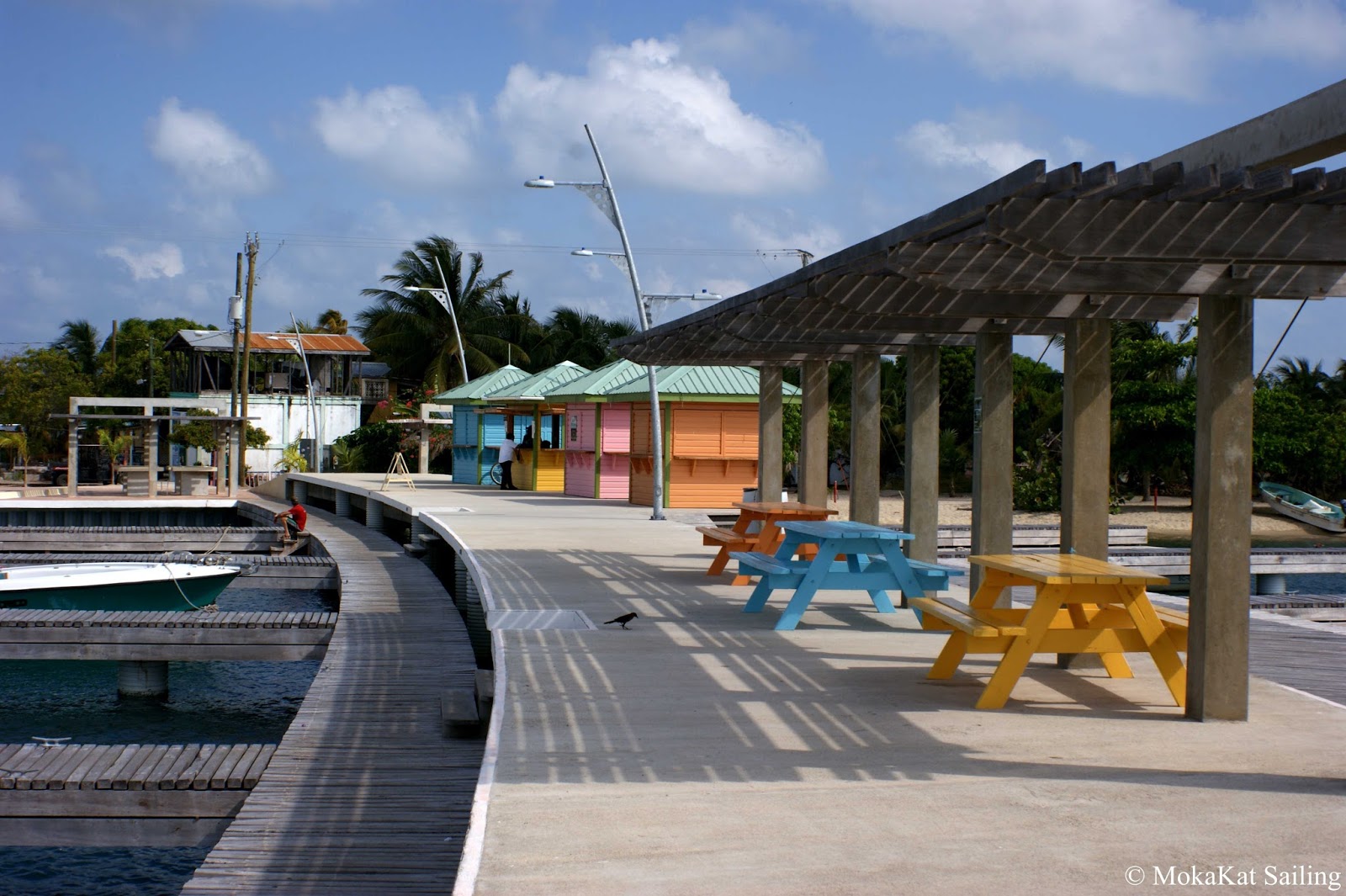 New Municipal Dock at Placencia Harbor
The day that Mike and Kathi was to arrive, I arraigned a taxi to take me to the Maya Island Airport and wait to take us back.  They arrived on time and ready to get off the little puddle jumper flight!  Maybe I didn't warn them of the low attitude flight from Belize City in a little two engine plane!  It is just part of the adventure!!! 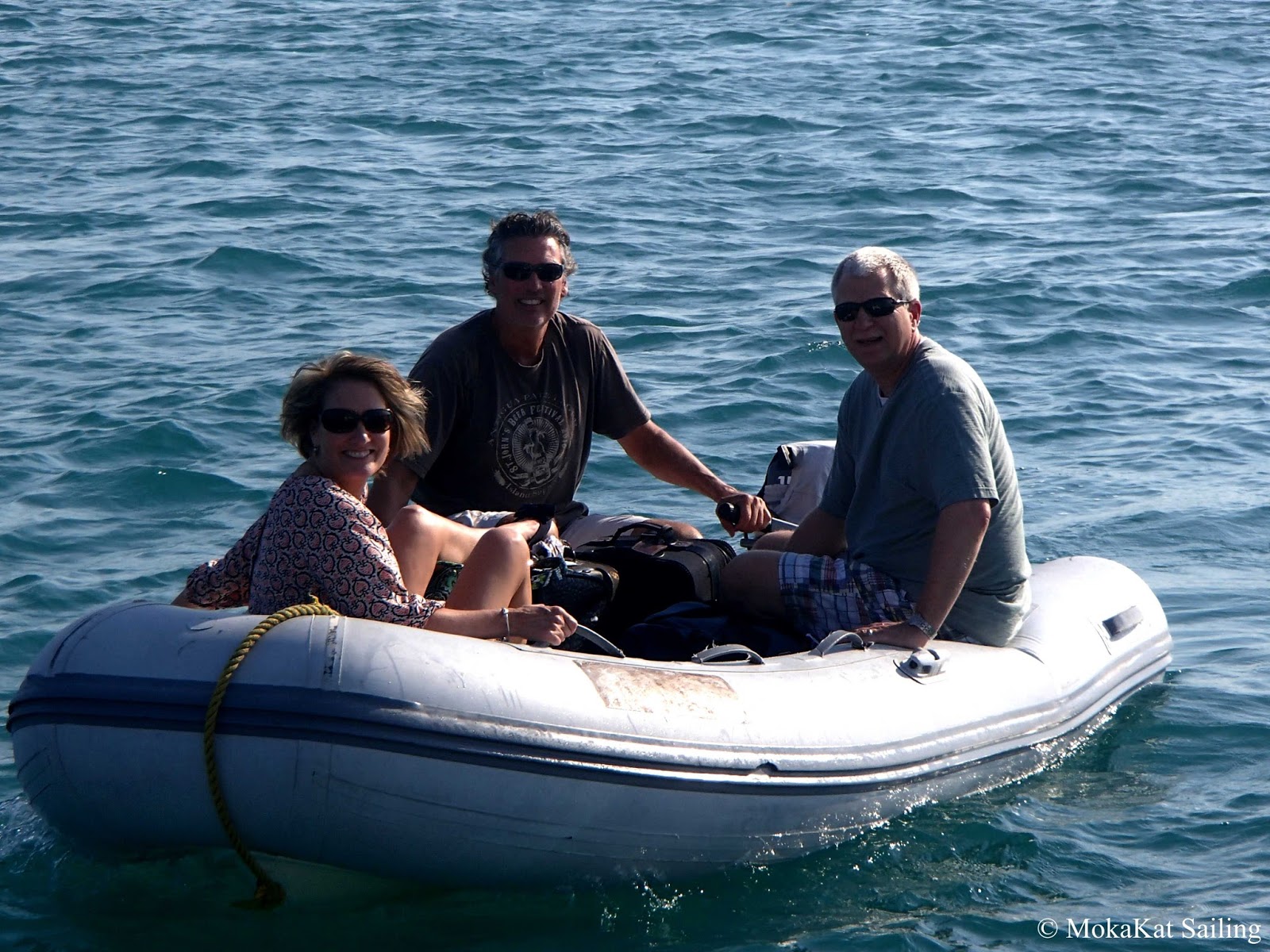 The last shuttle of their journey to MokaKat! 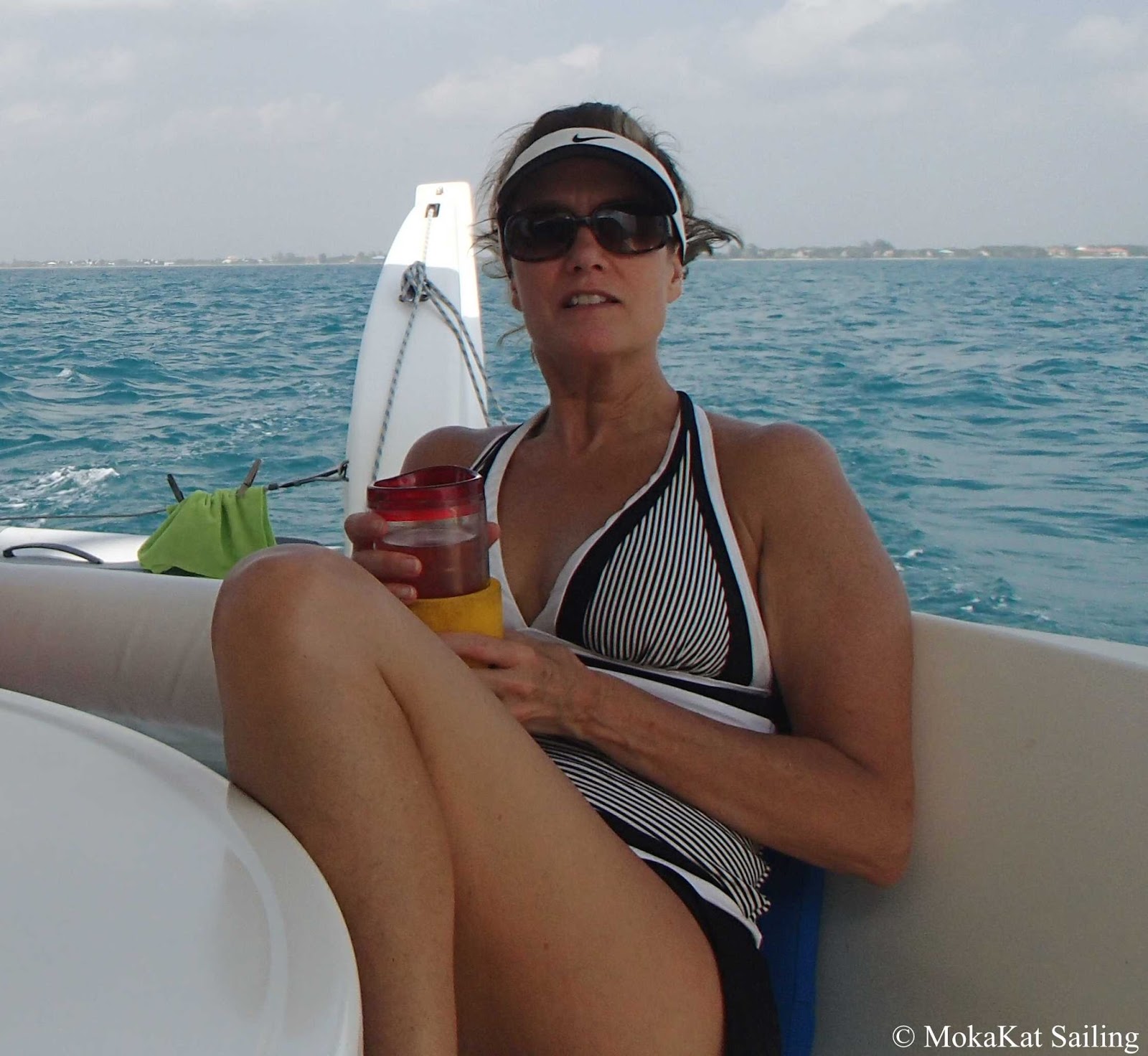 Happy to finally  be on MokaKat! 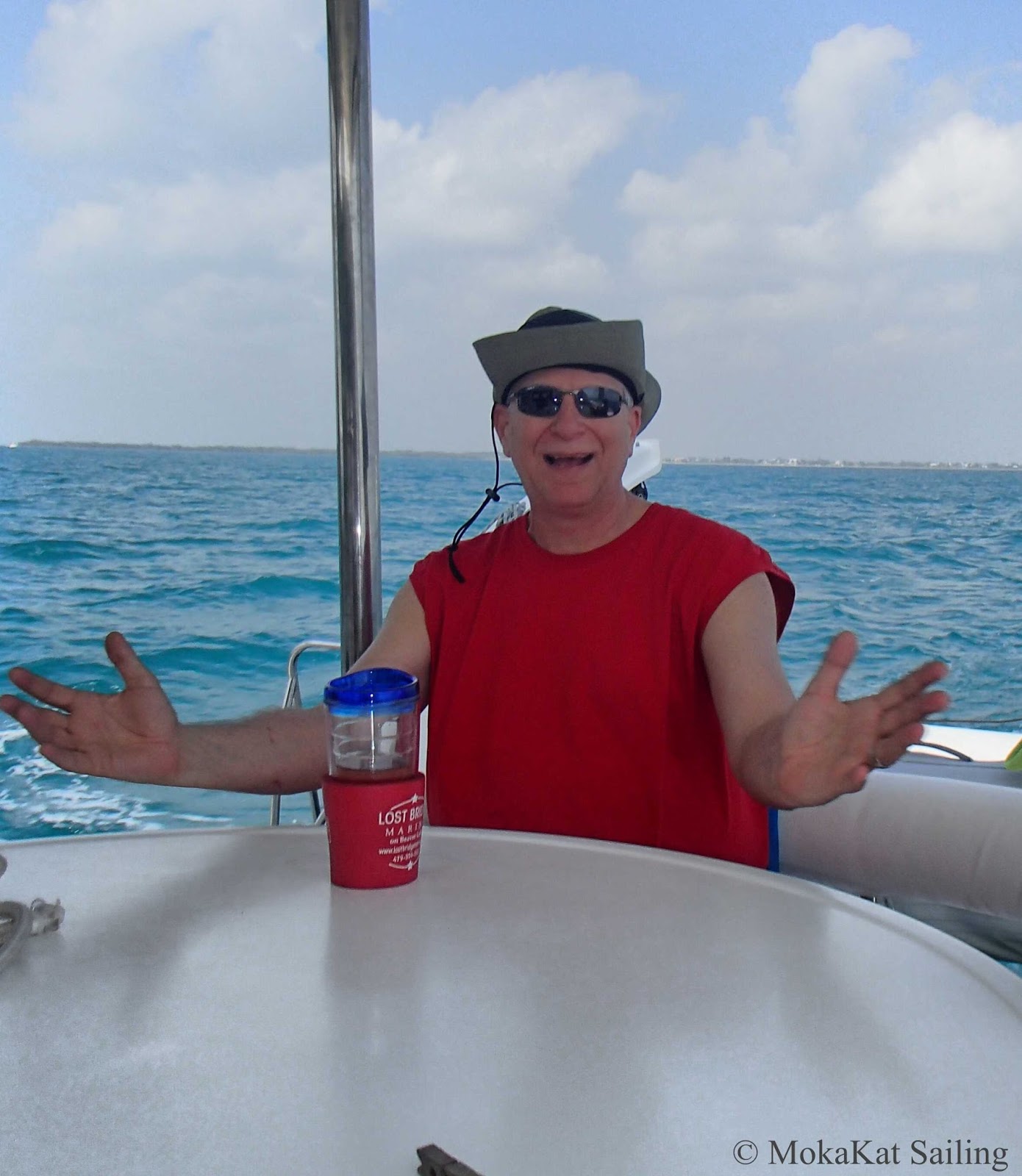 It was easy!  Just two flights, one puddle jumper, one taxi, and a dinghy ride!
We then took them to Yoli's Bar to check out the cruising crowd!  It was crazy busy, so we visited with a few of our friends and headed over to a local restaurant for dinner.  Welcome to Placencia!!!
The next day we headed offshore to Hatchet Caye, about 24 NM away.  We had a great sail, with 15 knots of wind.  We had to do some tacking but eventually we made it to Hatchet and a safe mooring ball! 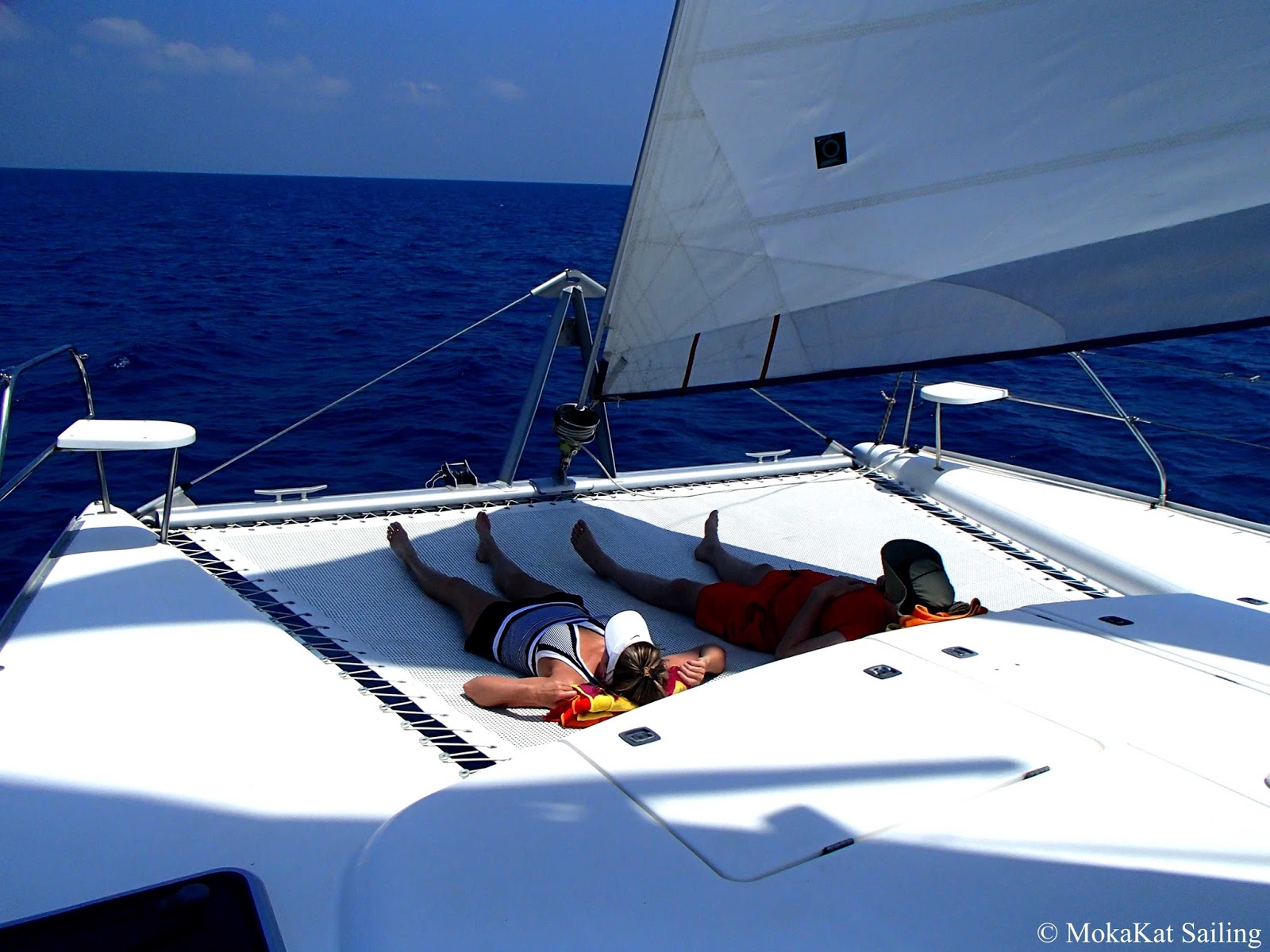 Mike and Kathi relaxing on the trampoline 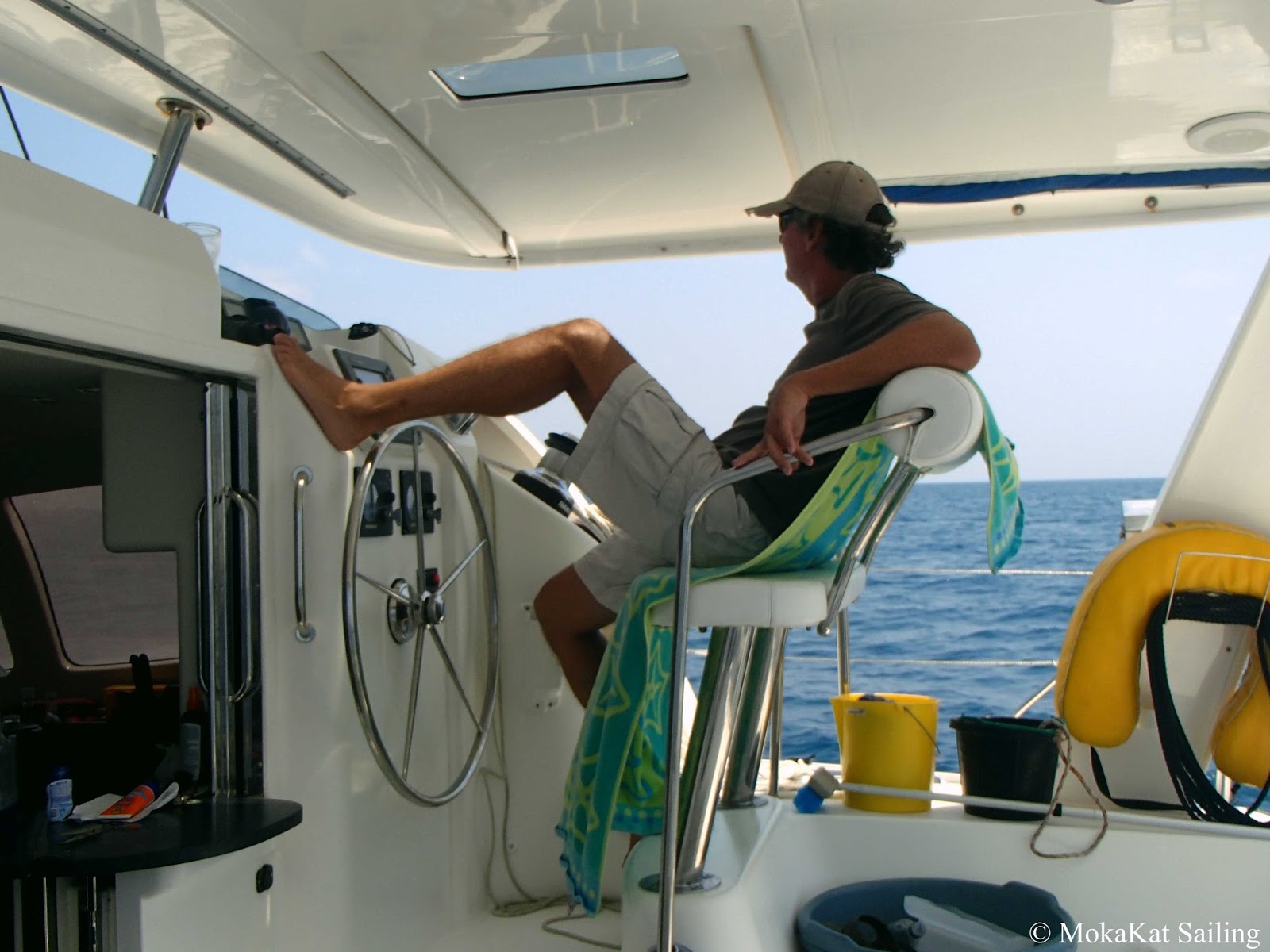 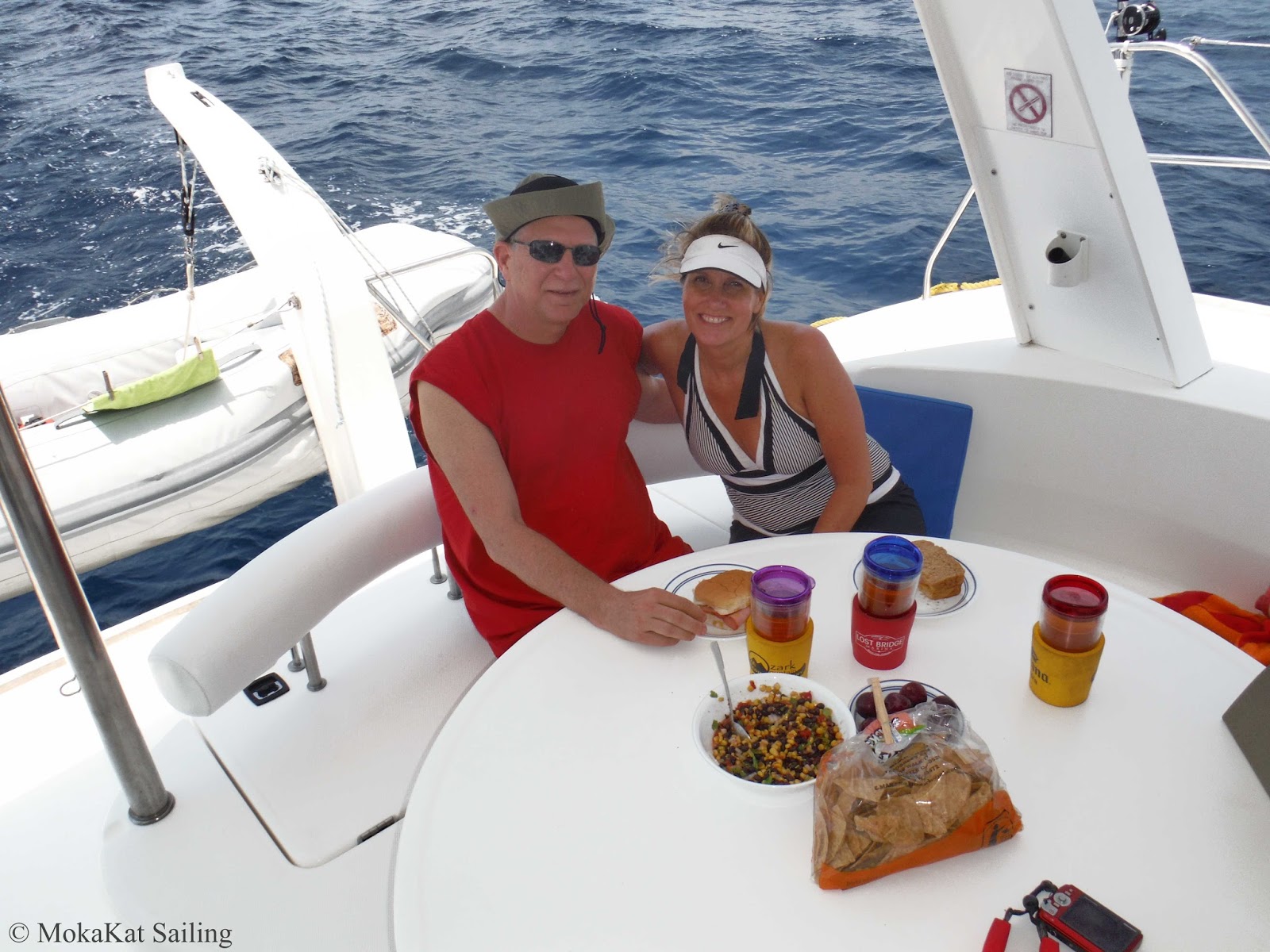 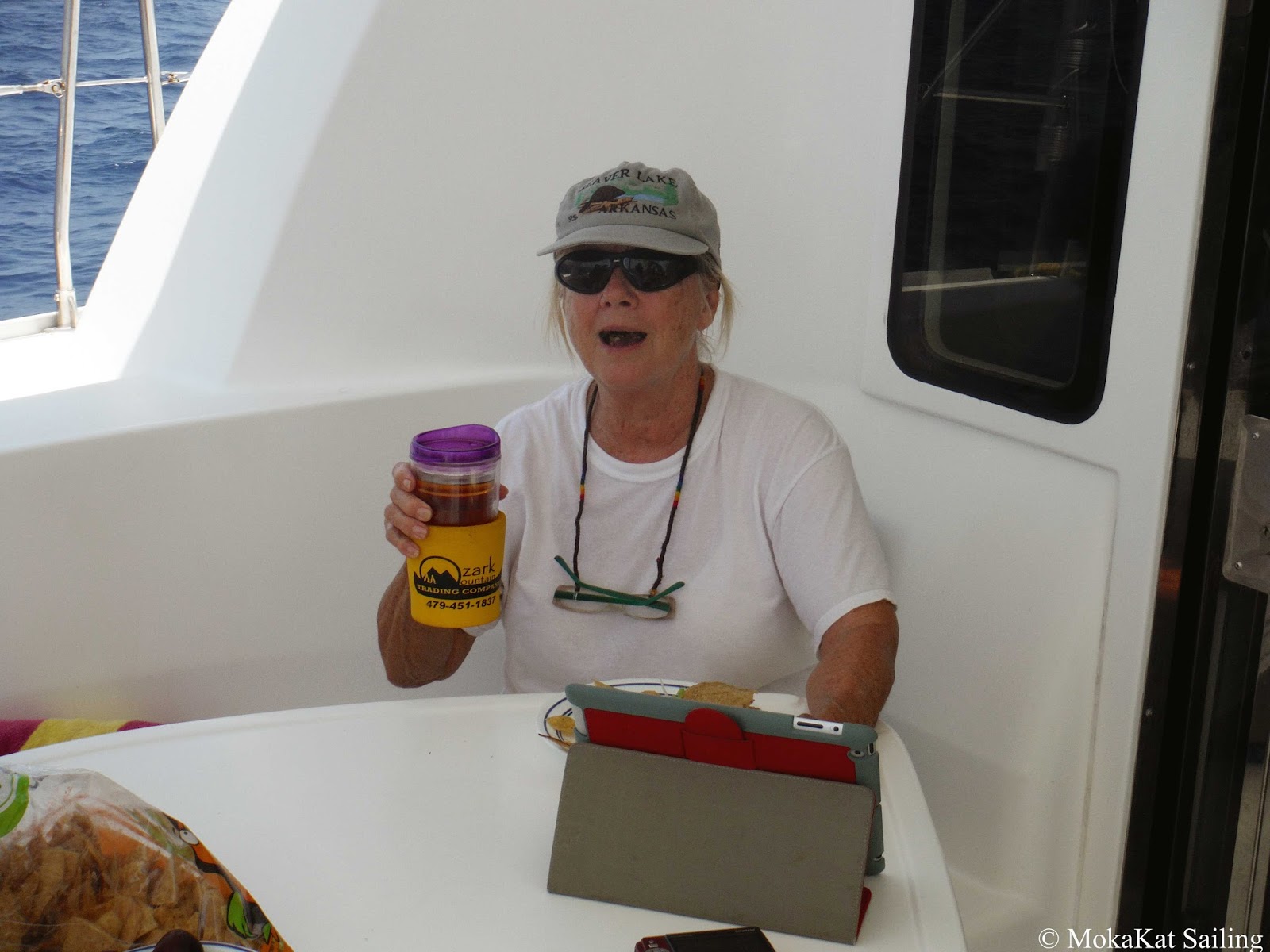 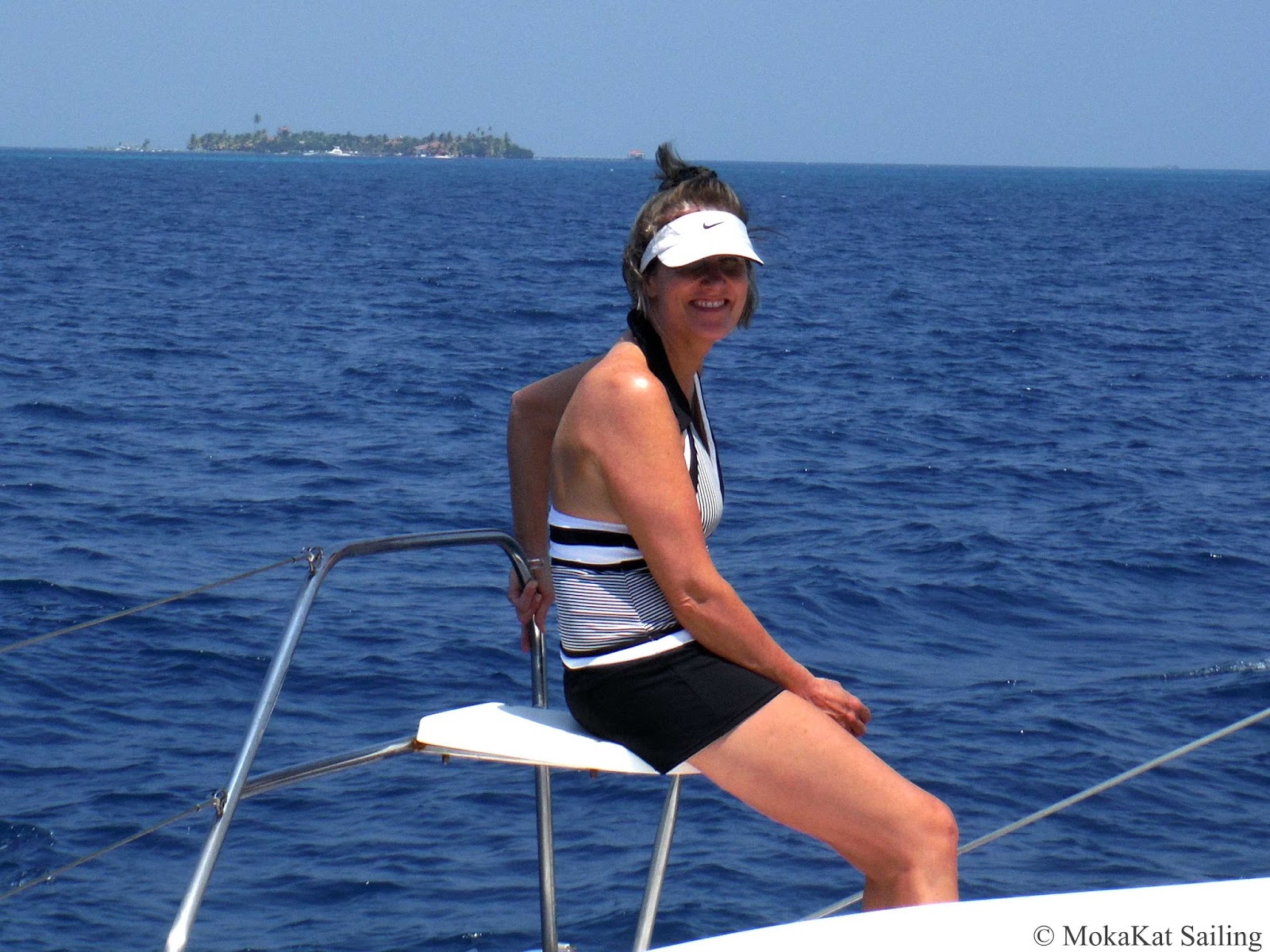 Kathi with Hatchet Caye in the background 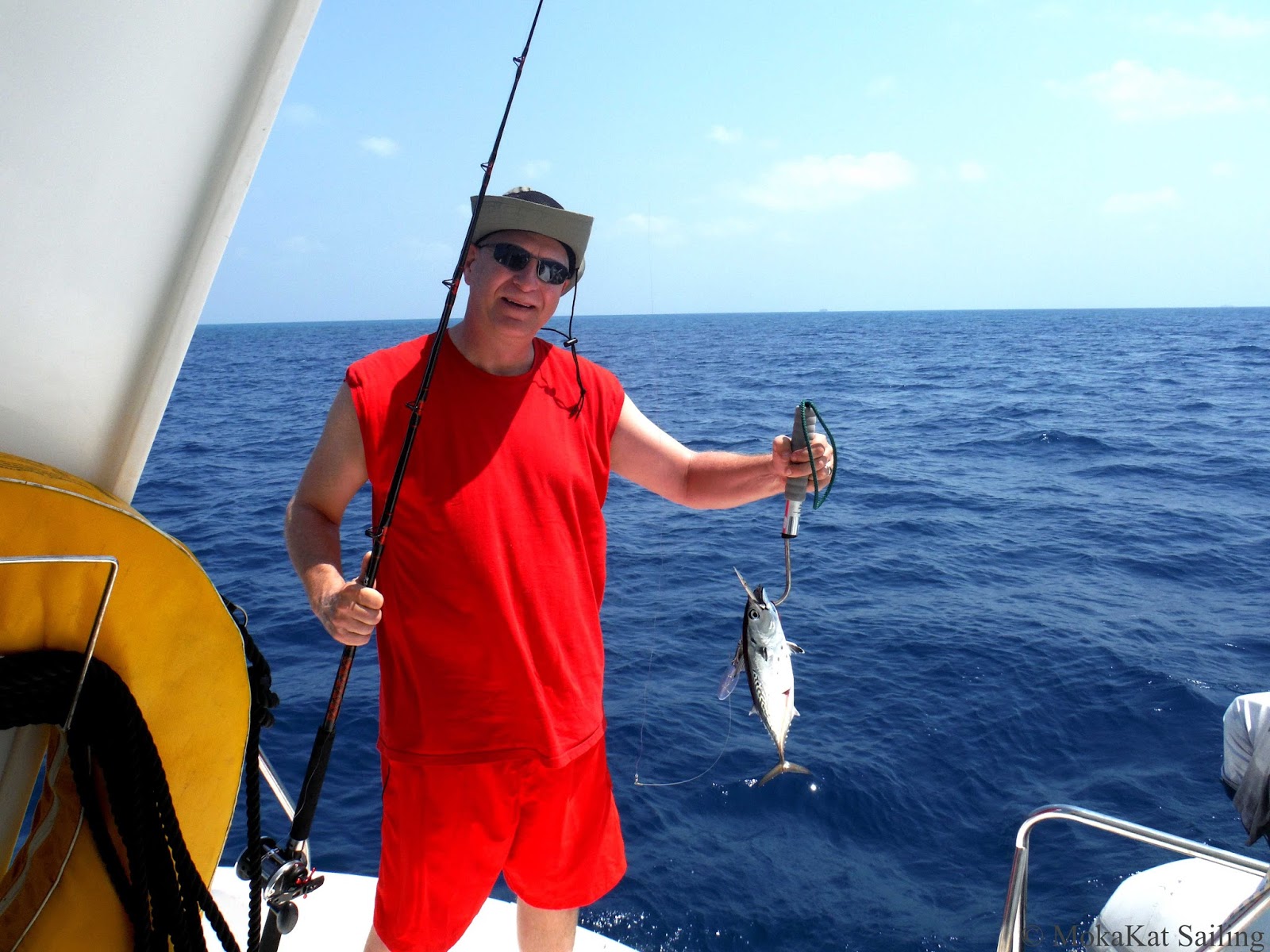 Mike caught the only fish, a small tuna
Once we were safely tied to the mooring ball, we took the dinghy into shore to pay our $15 mooring ball, get dinner reservations, and checkout the island.  We then headed back to MokaKat for some snorkeling!  The mooring balls are close to the reef, so we can just swim off the back of the boat and over to the beautiful reef! 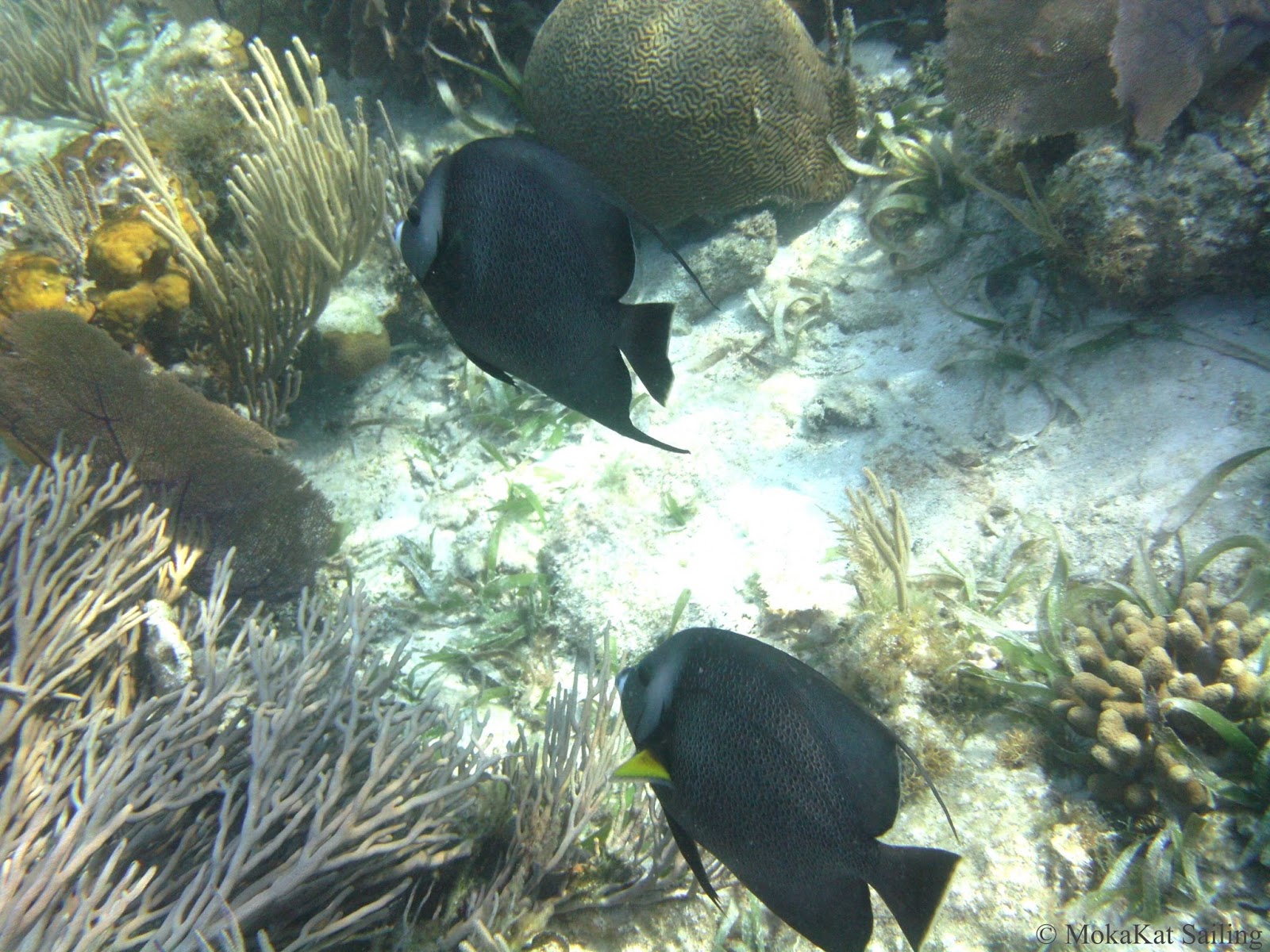 Kathi and I were snorkeling together and I saw a huge cloud of sand ahead.  I told her that something large was digging around.  I went forward to investigate, and she headed the opposite way!  What???  I guess she though that anything large enough to make that large of a sand cloud, she didn't want anything to do with!  I ended up waiting for 10 minutes or so until the cloud cleared up.  It was spooky, as I could see some movement but couldn't see the animal.  At last, I could see the shape of a large skate, digging in the sand!  It was really spooky, as he looked like an alien, as he finally rose up and swam past me!  He was almost 8 feet across...a monster!!!  I followed him for a little while, taking some pictures and a couple of videos!  He finally got tired of me following him and headed out to deeper water!  What an experience!!!﻿ 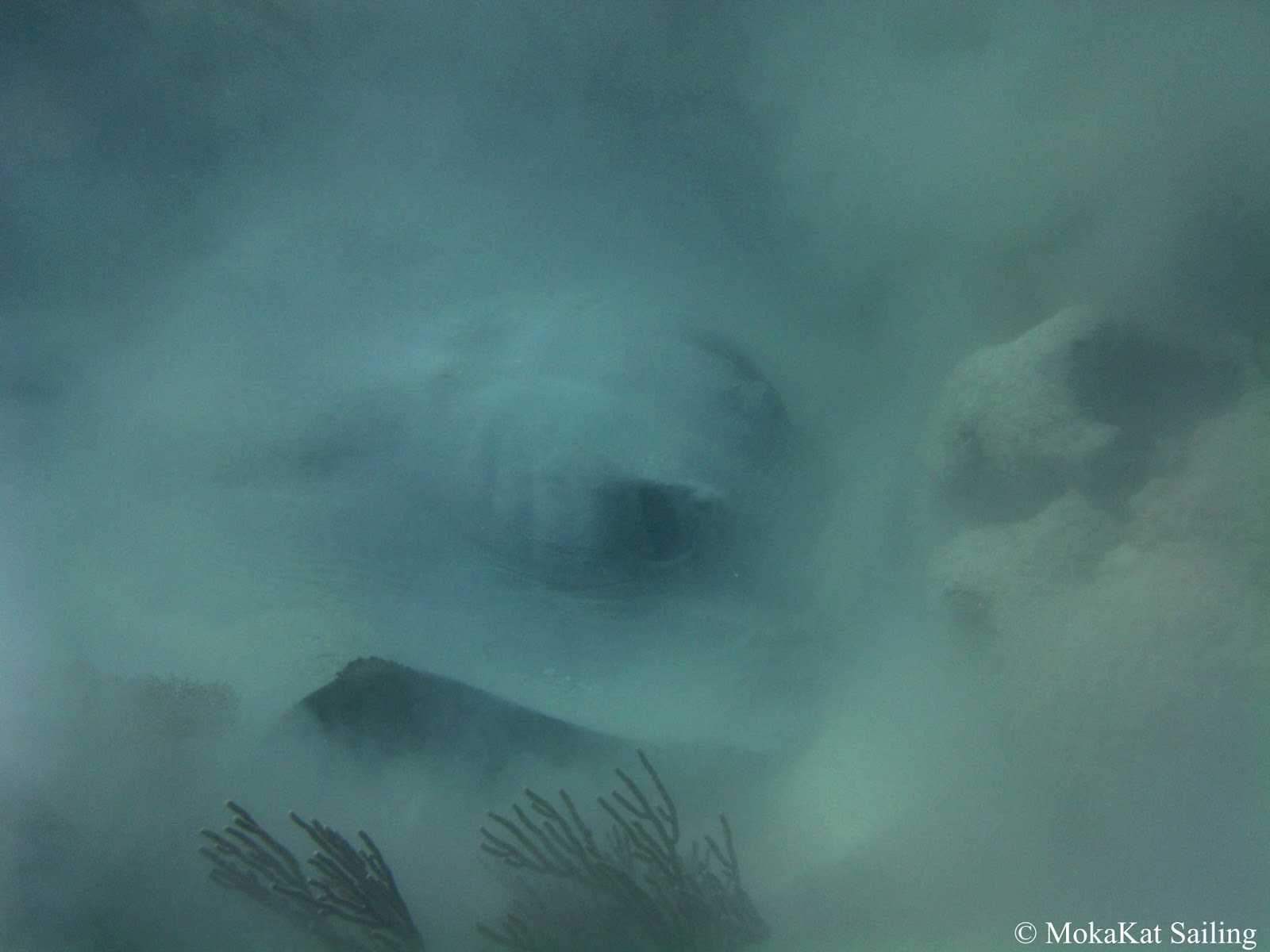 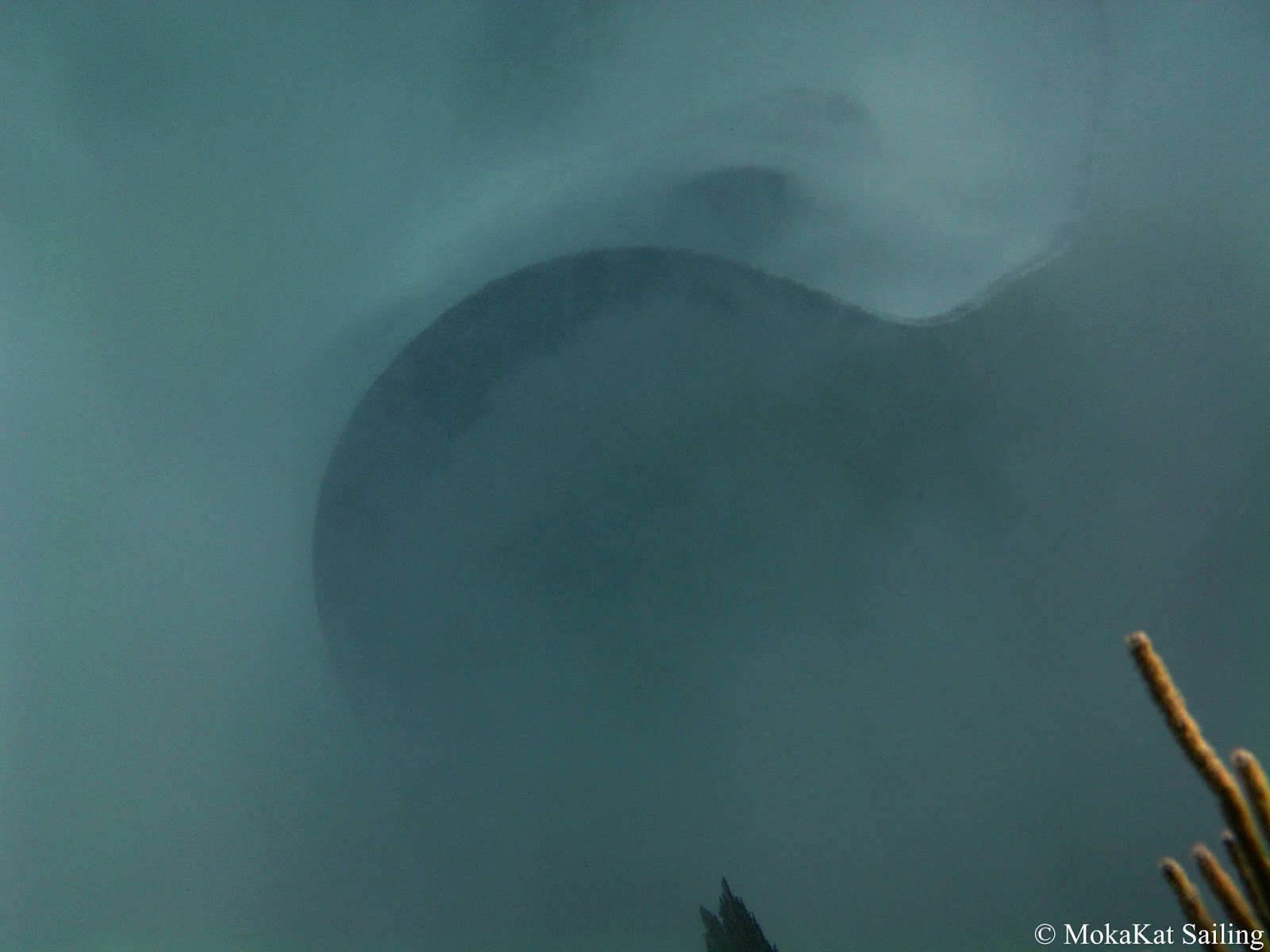 He rose and swam past me 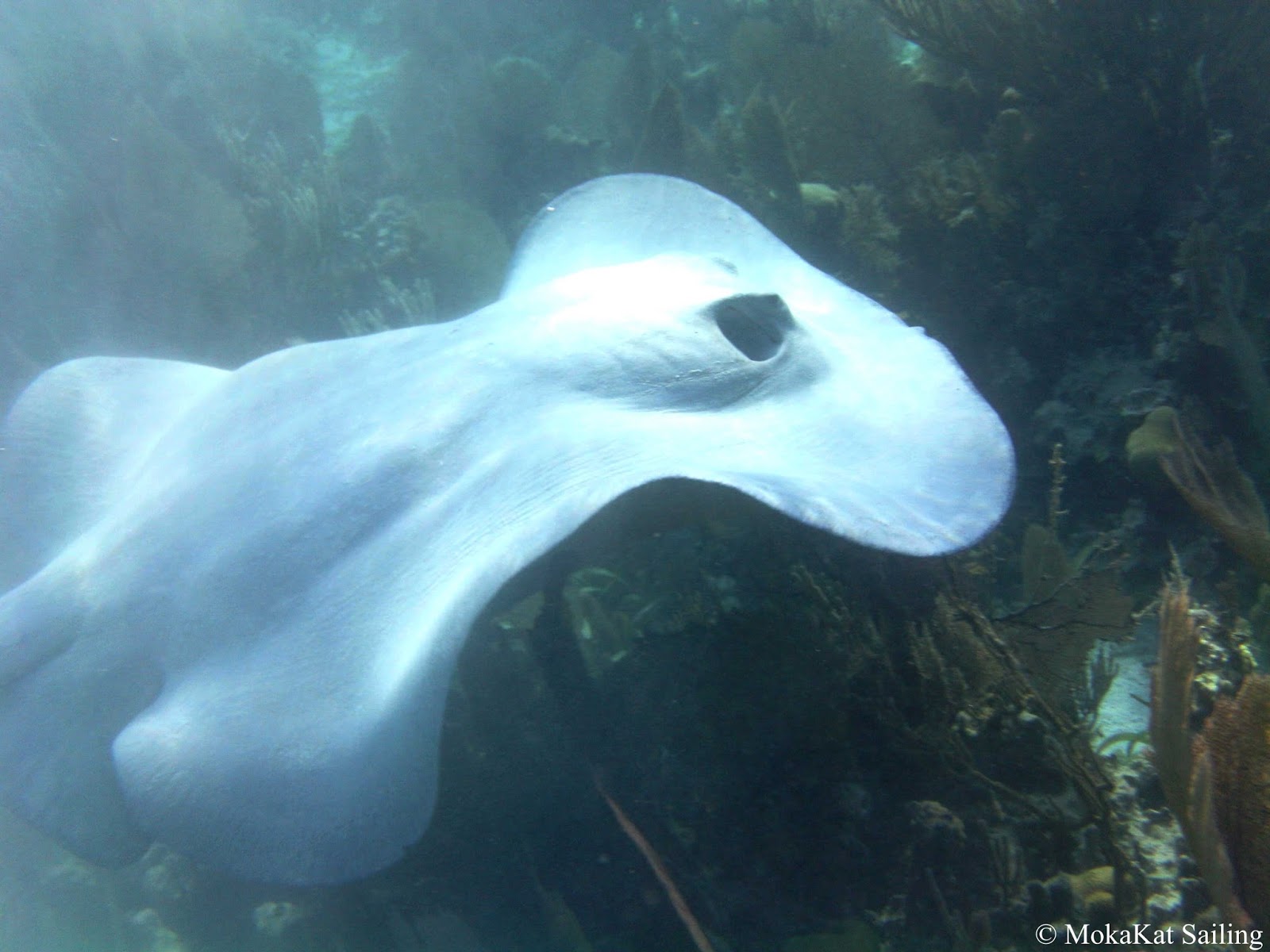 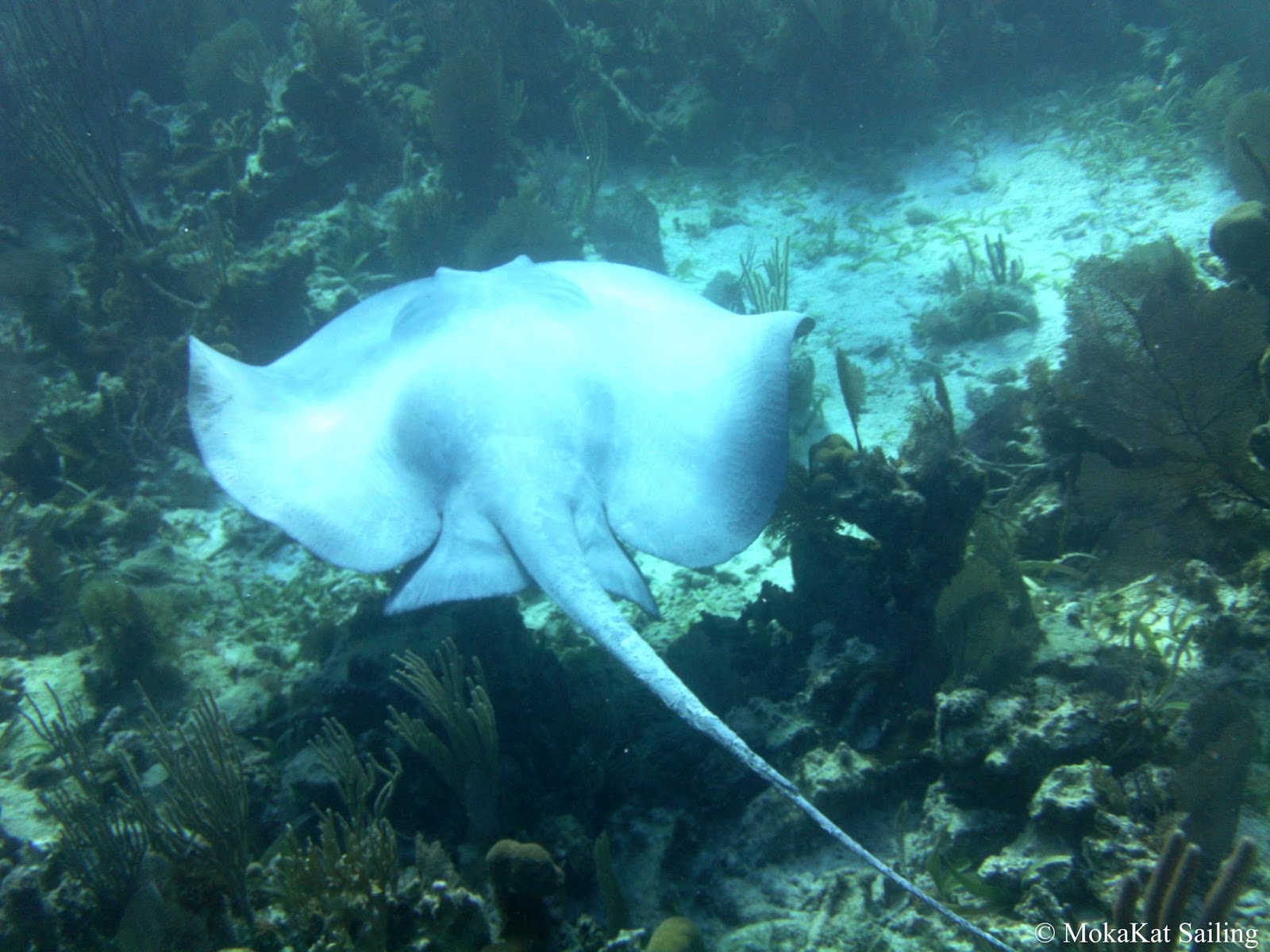 We watched an amazing sunset and then headed into the resort to eat dinner.  There was a Moorings Charter Catamaran tied up behind us and ended up in the sunset pictures.  In the resort, I found the couple that was on that boat and offered to send them the beautiful sunset pictures.  He was from Germany, and his wife was from Brazil.  It was his 60th birthday, and they were celebrating it on a cruise!  I traded emails with them, and sent them these two pictures. 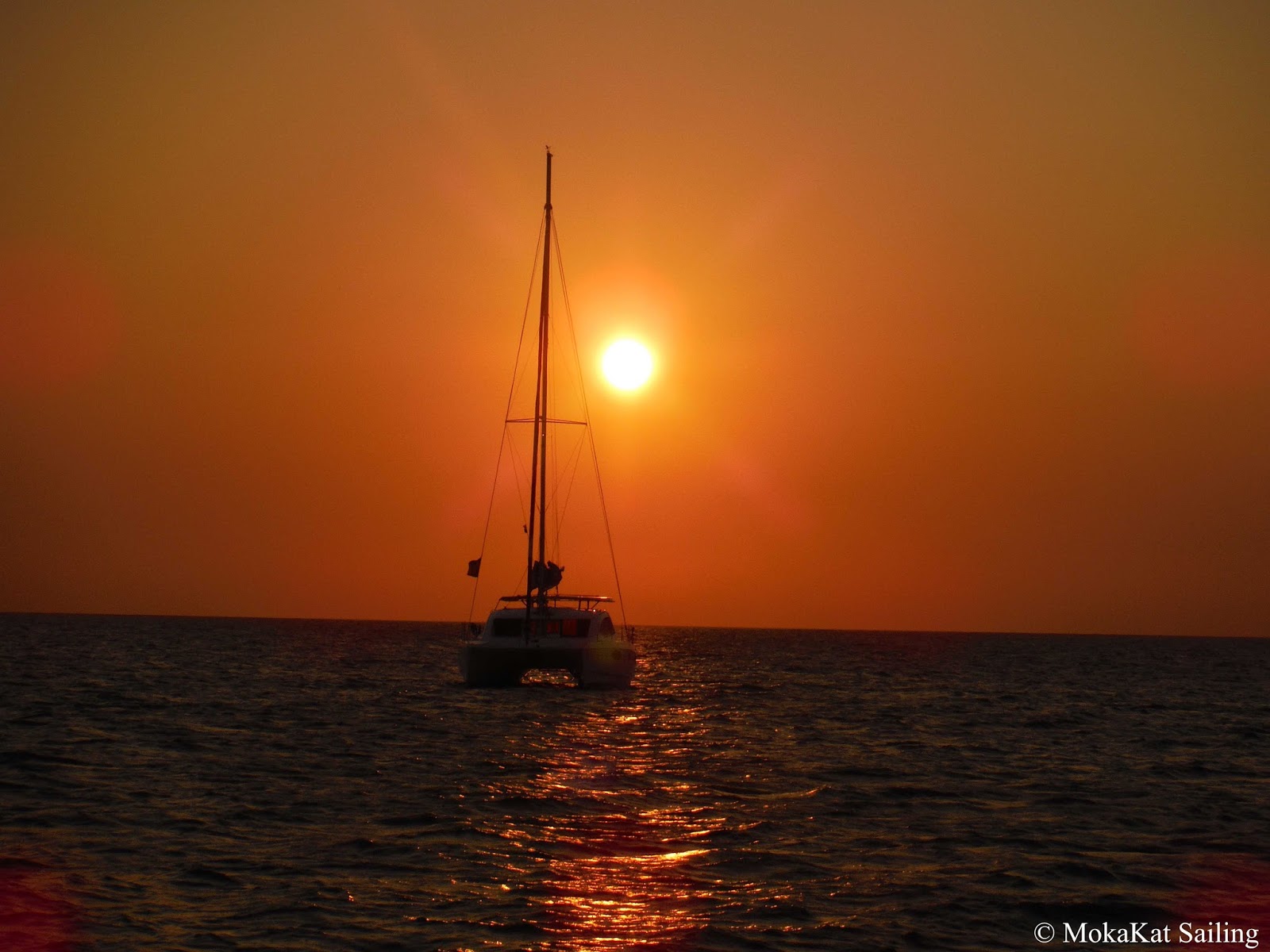 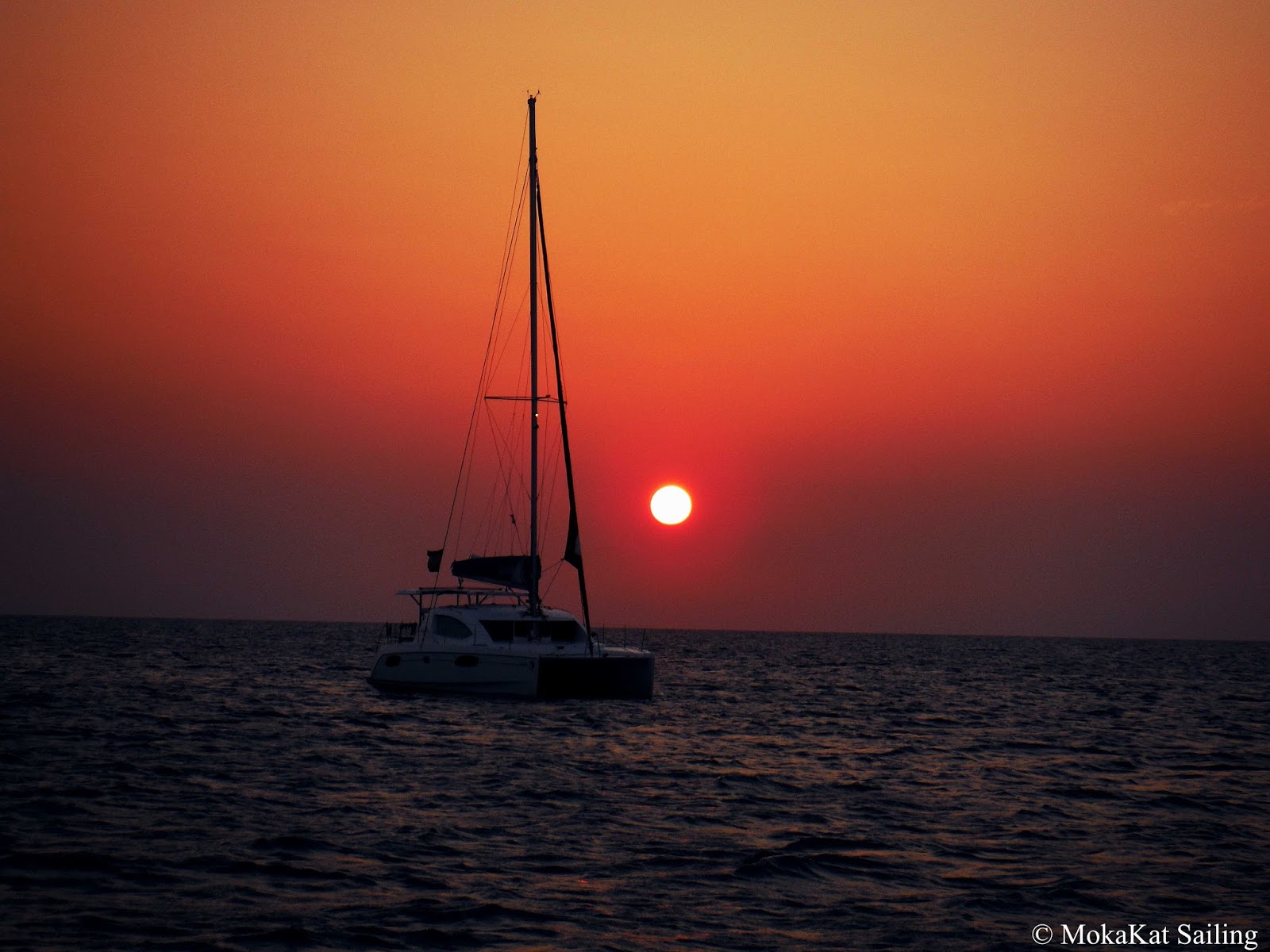 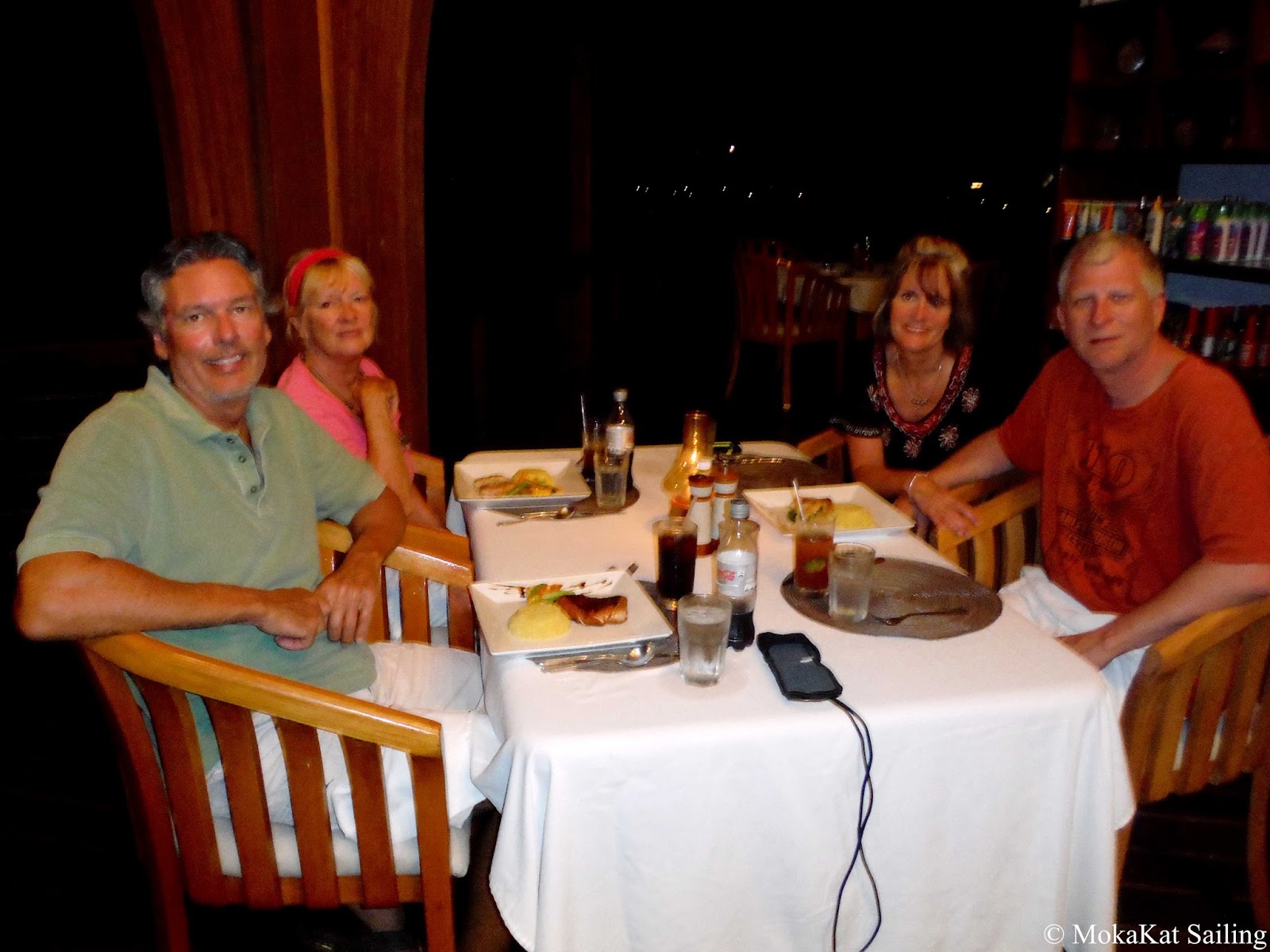 Dinner at Hatchet Caye - Dale, Augie, Kathi, and Mike﻿
Mike was a little sea sick, so he wasn't 100% on our first day in Hatchet Caye.  We provided him with a patch, and he felt better for the rest of the week.  We felt sorry him on his first day, as he fed the fish a few times.  He had taken a few pain pills for some back pain, and that with the motion was a bad combination!  We were very happy that Mike was feeling better!
The next day we enjoyed a very nice snorkel, and Mike actually enjoyed it too!  We ate fish and chicken on the grill and enjoyed another beautiful sunset. 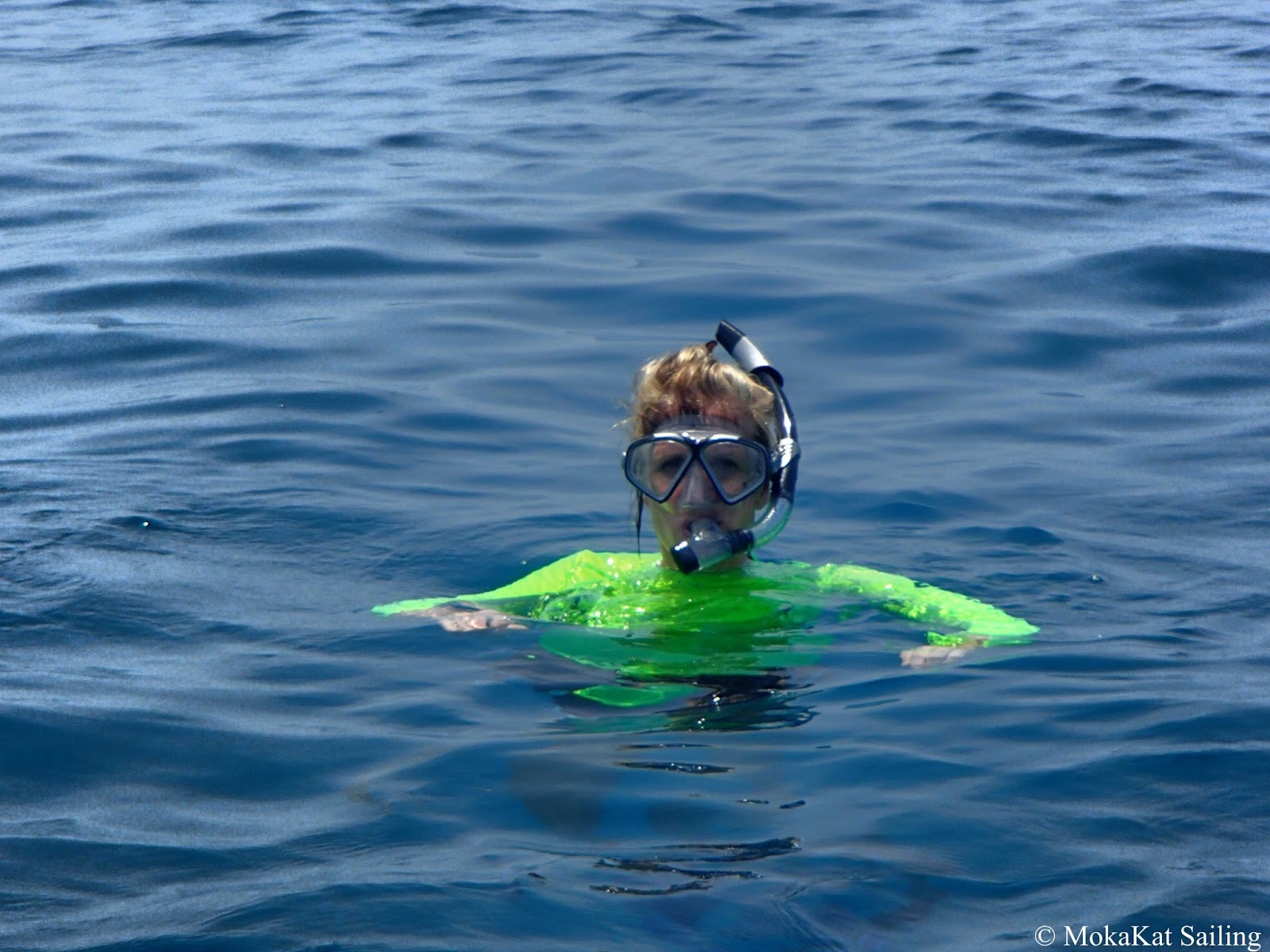 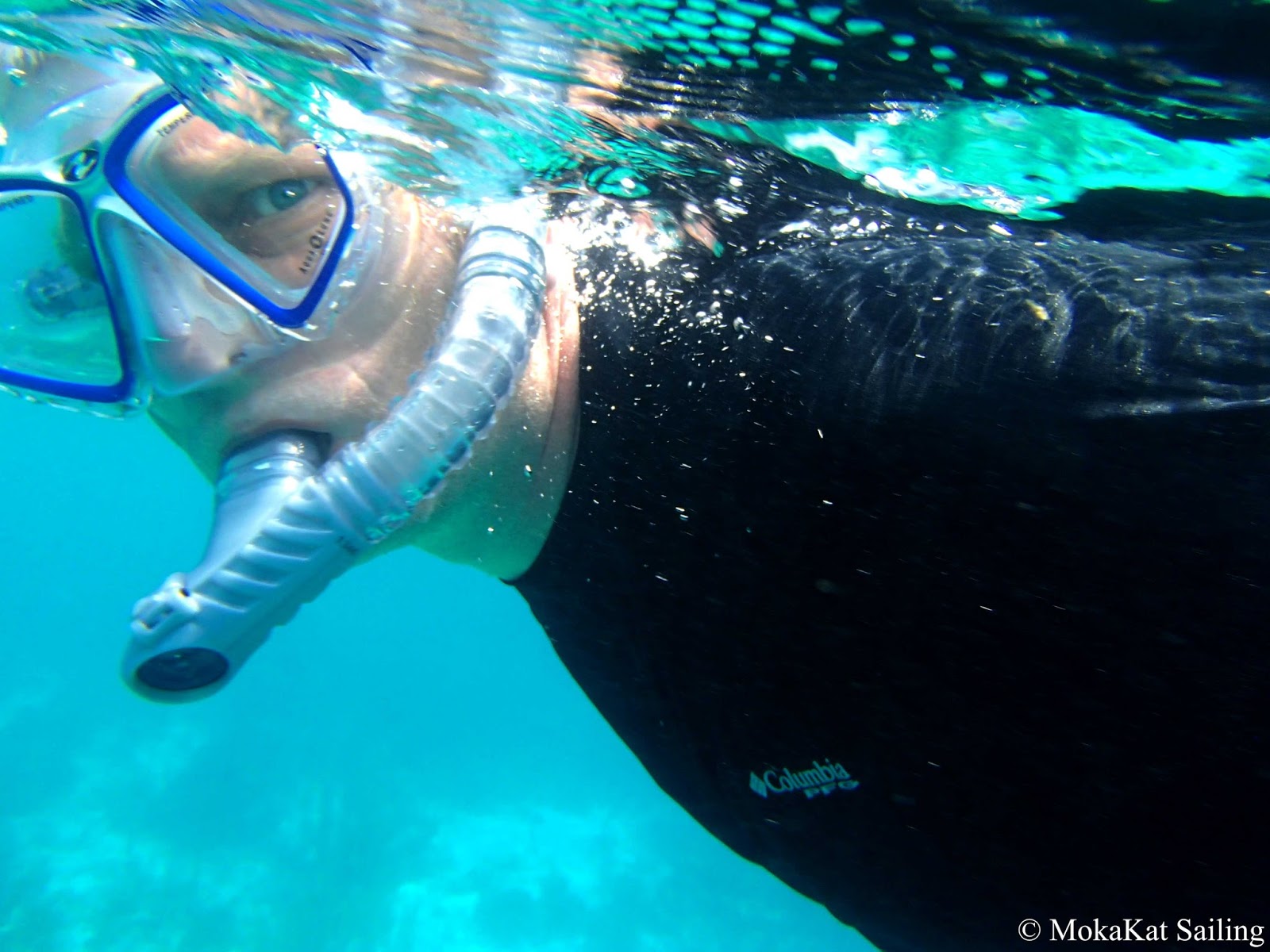 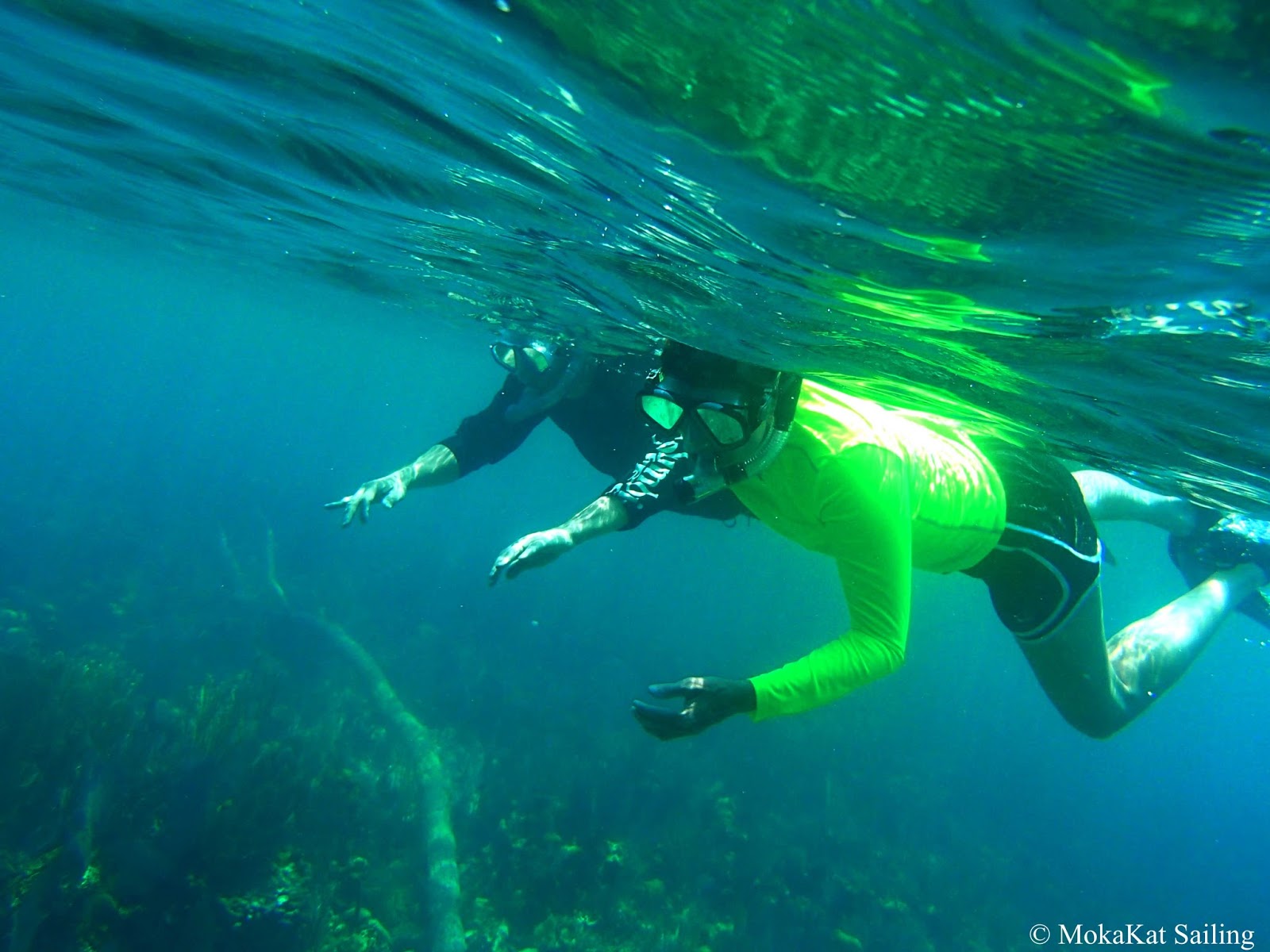 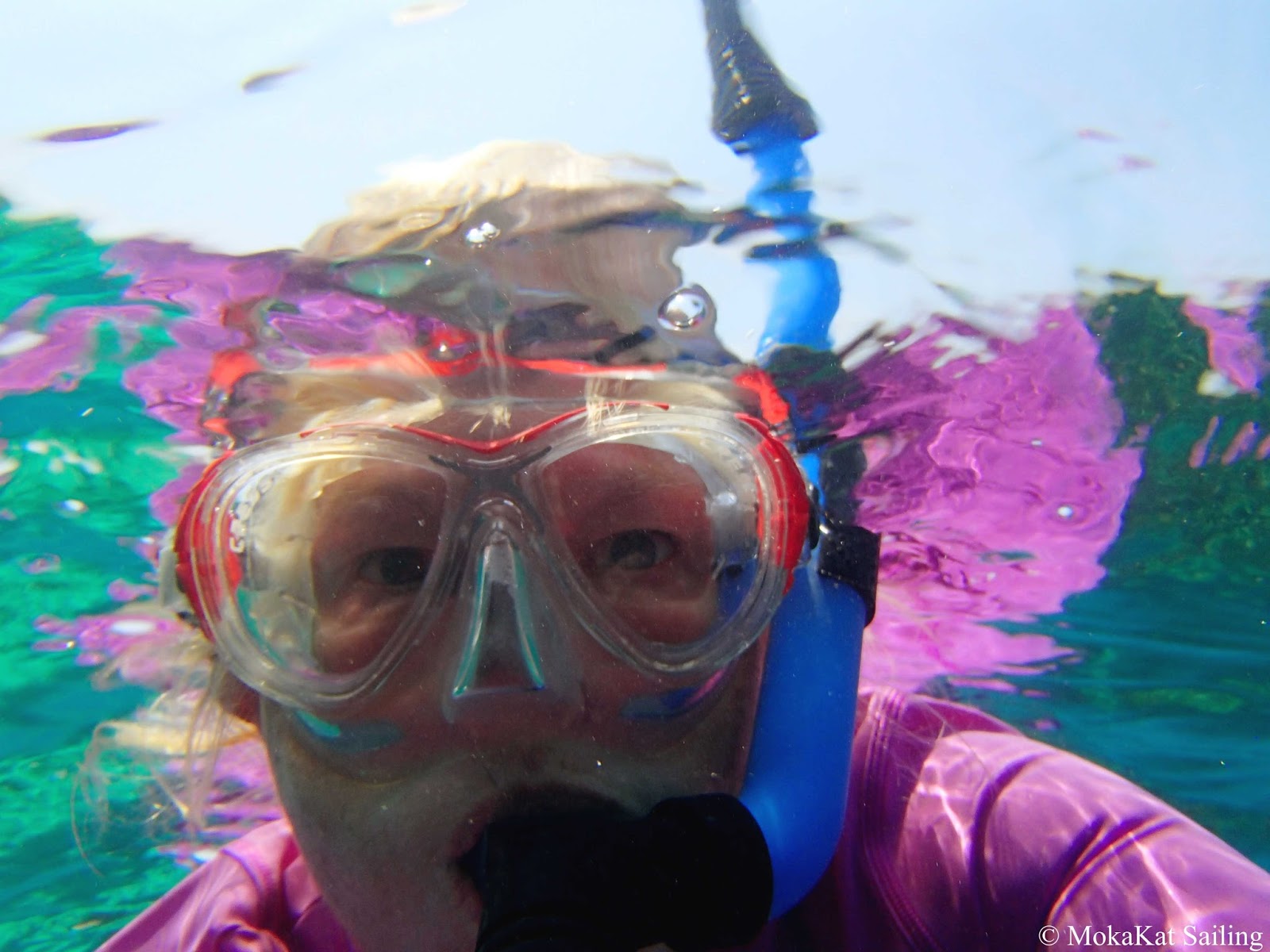 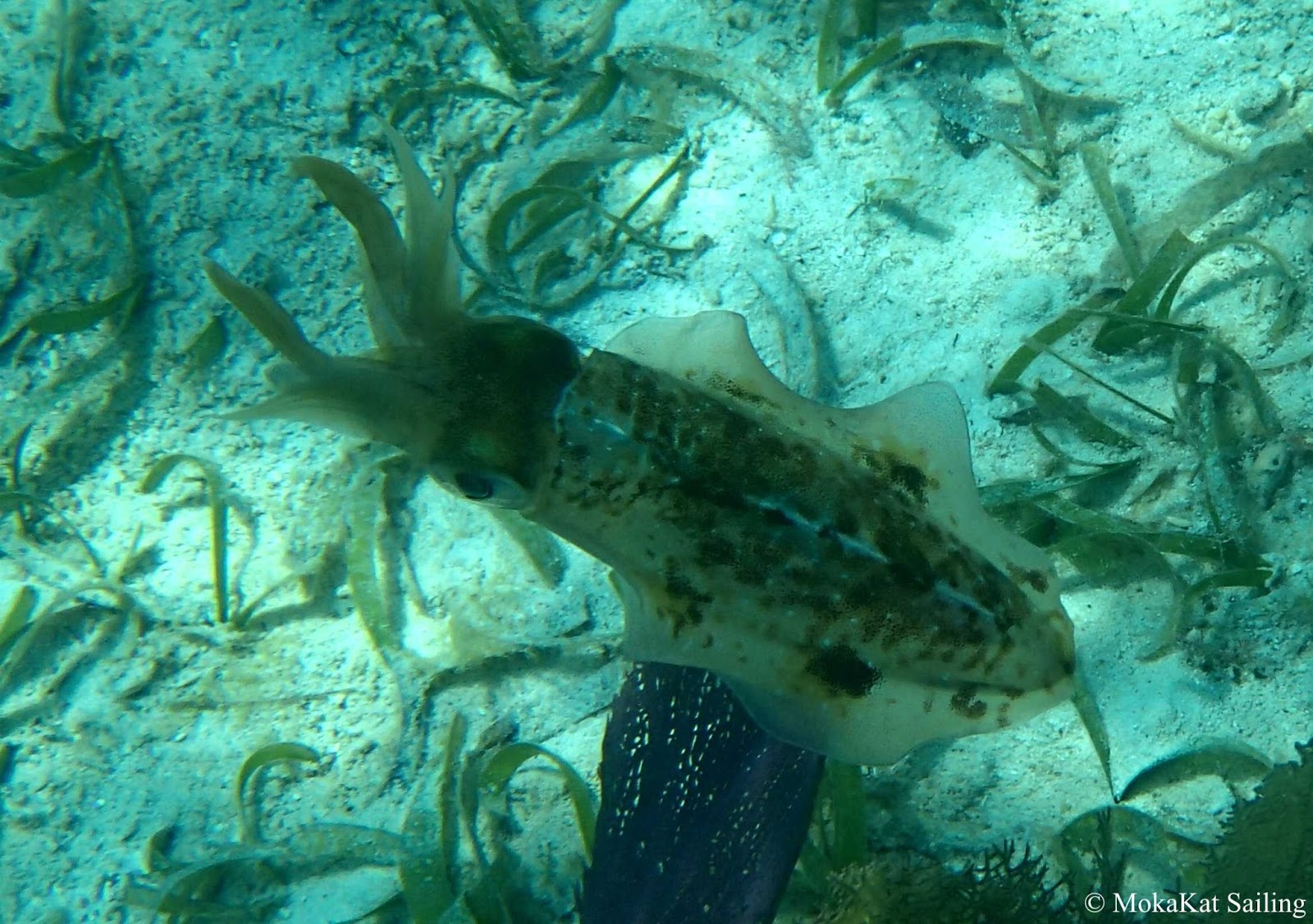 Squid
We had a good night, and woke early to a beautiful sunrise.  We were heading to Pelican Cay today, and to one of our favorite spots, Hideaway Caye with Dustin and Kim.
﻿ 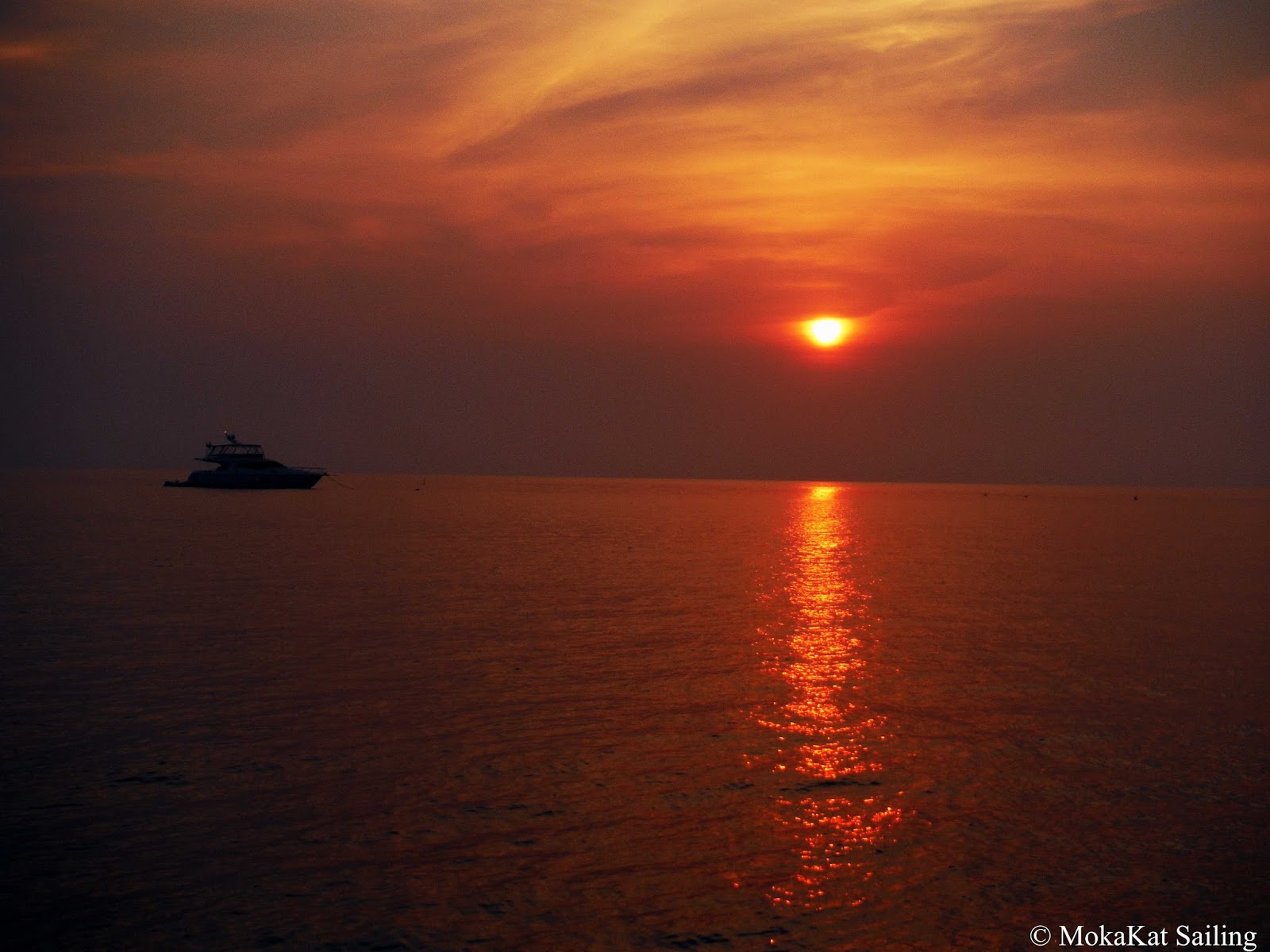