So one of my best friends from back in Arkansas is Bubba.  His real name is Robert, but I believe that somewhere down the road, he earned the name Bubba!  He is usually a little crazy, so I was hoping that we wouldn't end up in a Mexican jail in the next 10 days!  We have been wanting to get together on the boat for most of the year, but with work and other things he wasn't able, until now!  Bubba is in the house!!!!

Bubba wanted to experience the cruising life, so the first day I had him in the front locker unbolting the windlass.  Of course it was 90 something degrees and 100 percent humidity, normal for us cruising types.  Of course Bubba wasn't used to high temperatures, as Arkansas has had a real cold winter and spring, and he was suffering helping me with the windlass.  The windlass stopped working a couple of days before, and we couldn't take the boat out without it working.  Also, the new owners expected it to be perfect, so we needed to get it fixed fast!  After removing the bolts and taking out the windlass, we took it over to a mechanic at one of the local marinas.  It turned out that the o-ring was leaking gear oil into the electric motor, and all it needed was a good cleaning and new o-rings!  After we installed it back, it worked better than it ever had!  The next boat I buy, I will service the windlass the first week!!!

We also walked a mile to the local grocery store to buy beer!  We used our little two wheeler to bring a couple of cases back to the boat!  I guess we could have taken the $3 taxis, but I needed to break Bubba into the cruising life in the right way! 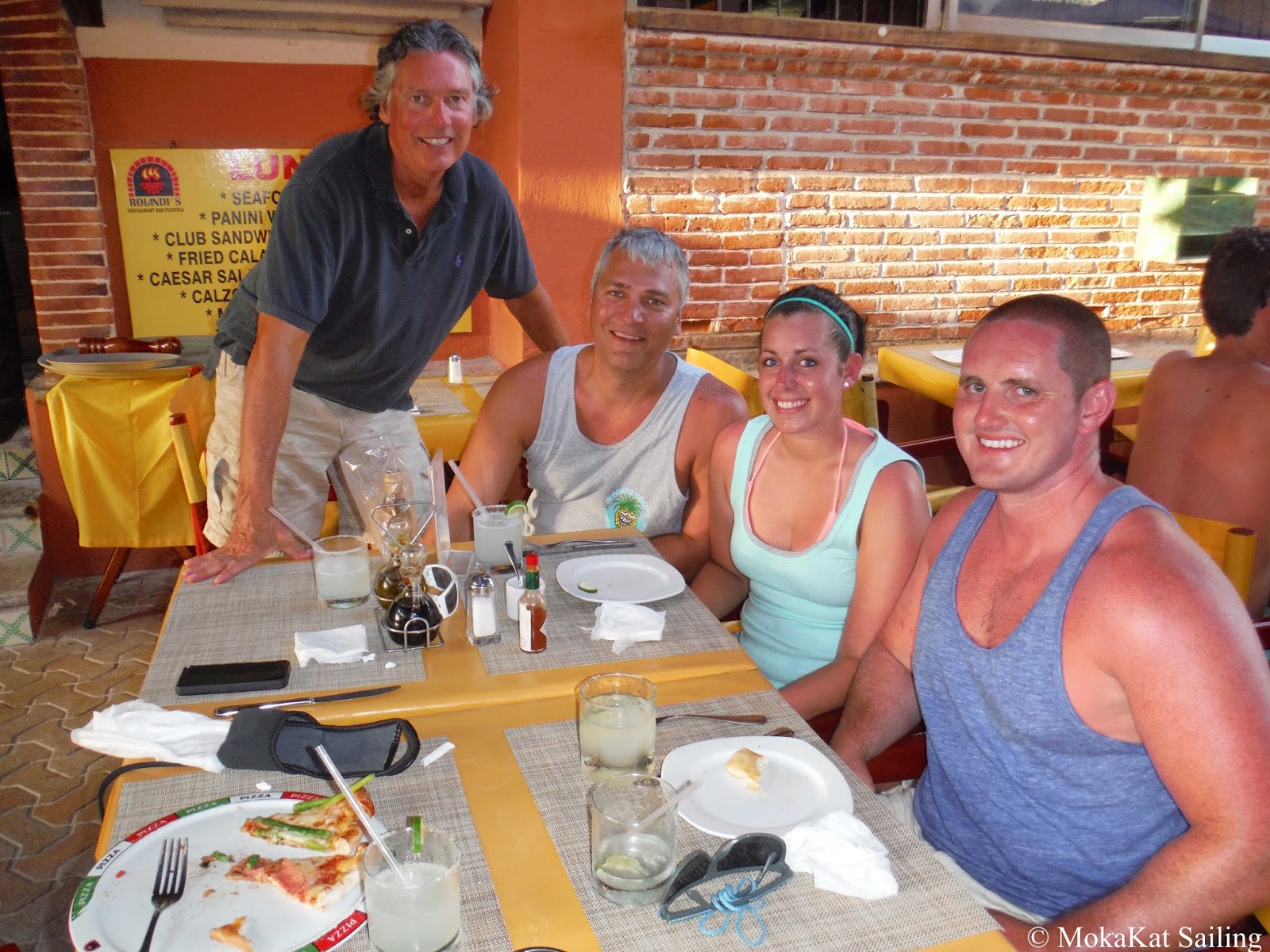 That night we were able to meet up with Josh and his wife, who were friends of Bubba and had been vacationing in Isla Mujeres.  They had been out to MokaKat earlier in the week, but because of the broken windlass, we were not able to go sailing.

Also, my mother ended up back on MokaKat, after her exciting trip toward Belize.  She was done with mono hulls for awhile, and was happy to be back on MokaKat!  Her misadventure was documented on an earlier post, for anyone that missed it!

So the next day we wanted to sail offshore and go fishing.  We just had a few days before the new owners were coming, so we wanted to take advantage of one last sail. There is a great fishing spot about 15 NM east of Isla Mujeres called Arrowsmith Bank, and that was where we were heading.  We motored out of the harbor and around the island on the south side.  The seas were rather large, but we still enjoyed a nice sail.  The only problem was that the wind was directly east, so we headed a little north east and would have to tack back east to get to Arrowsmith. 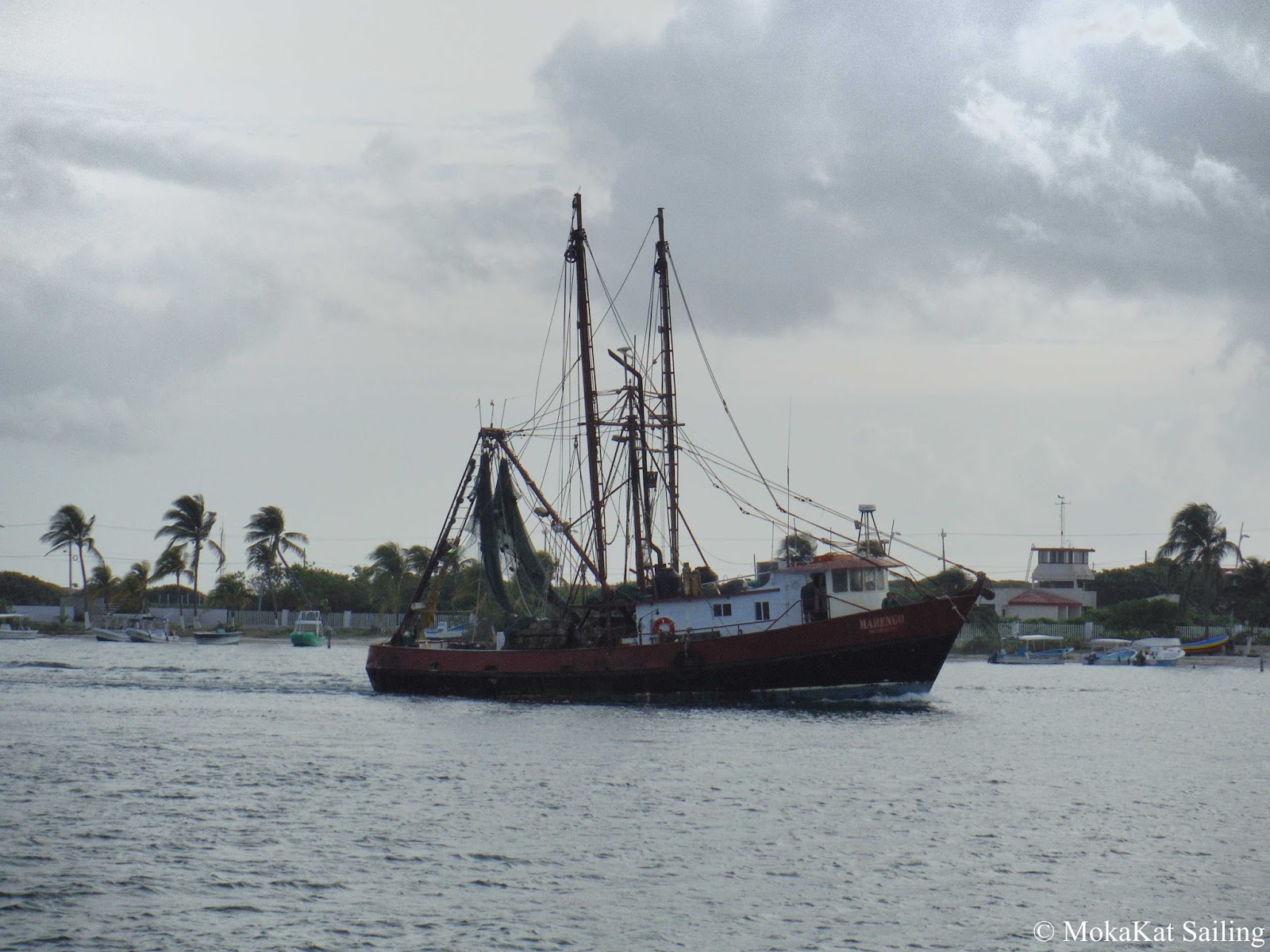 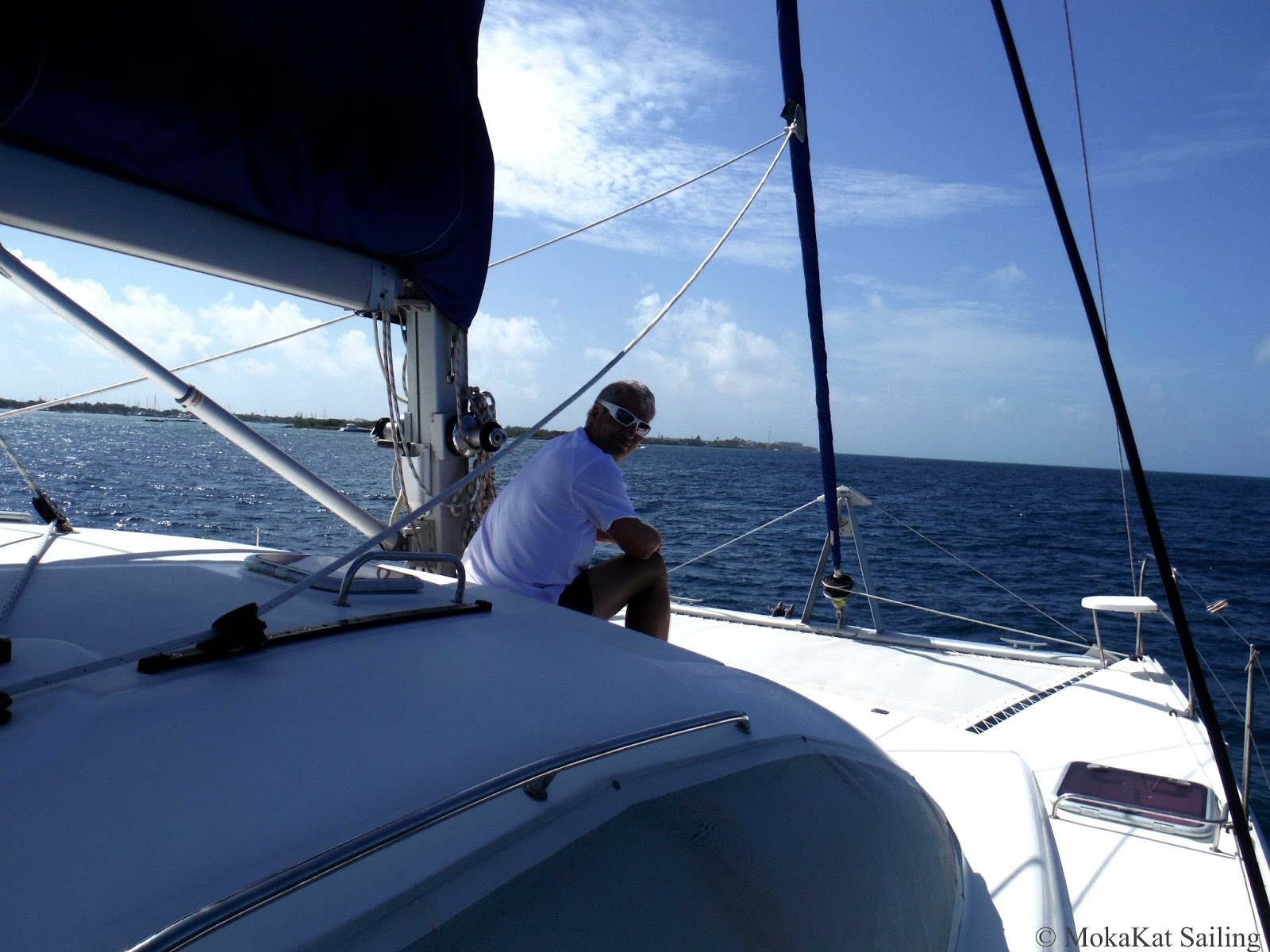 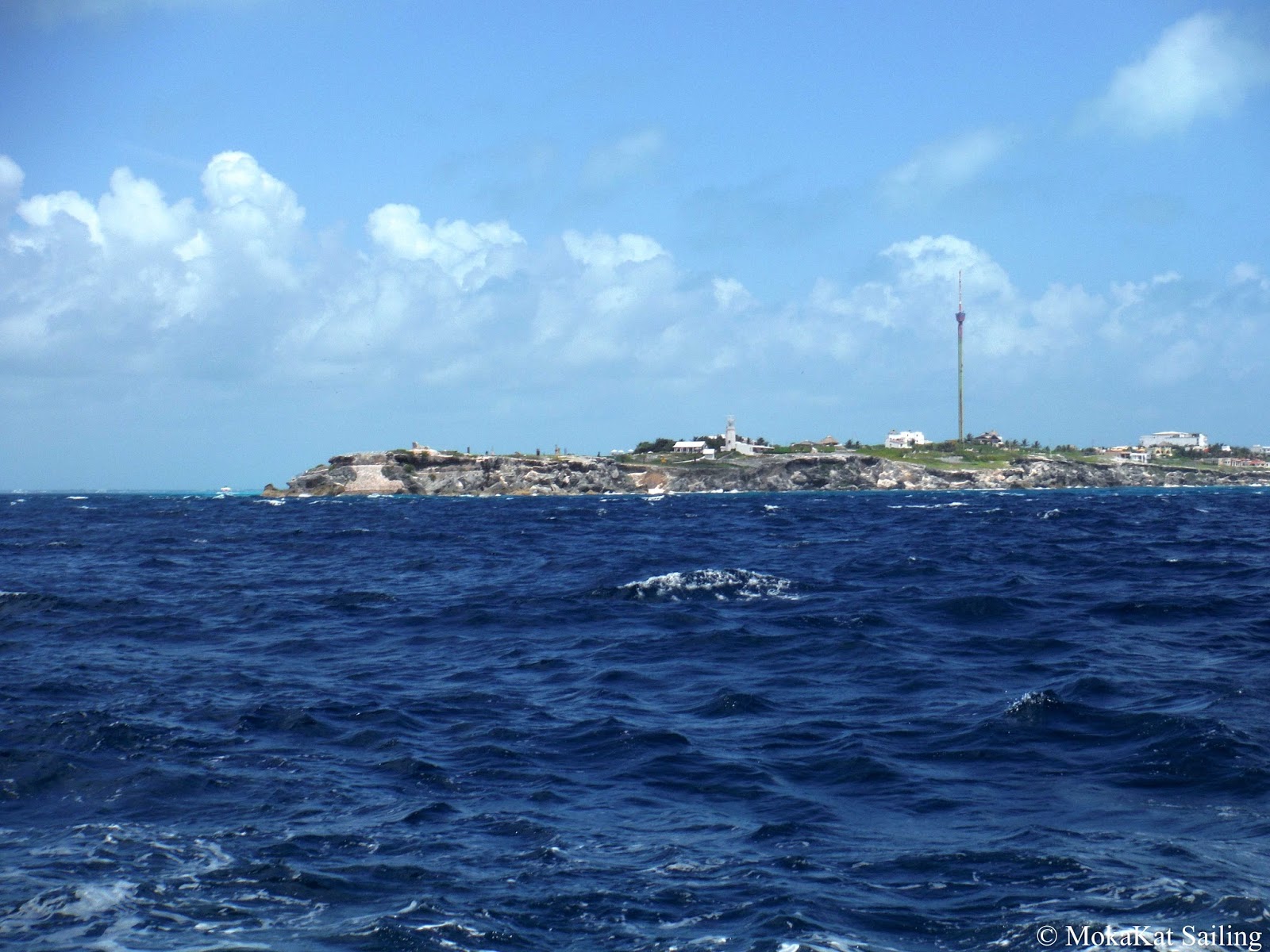 The East side of Isla Mujeres and large ocean waves 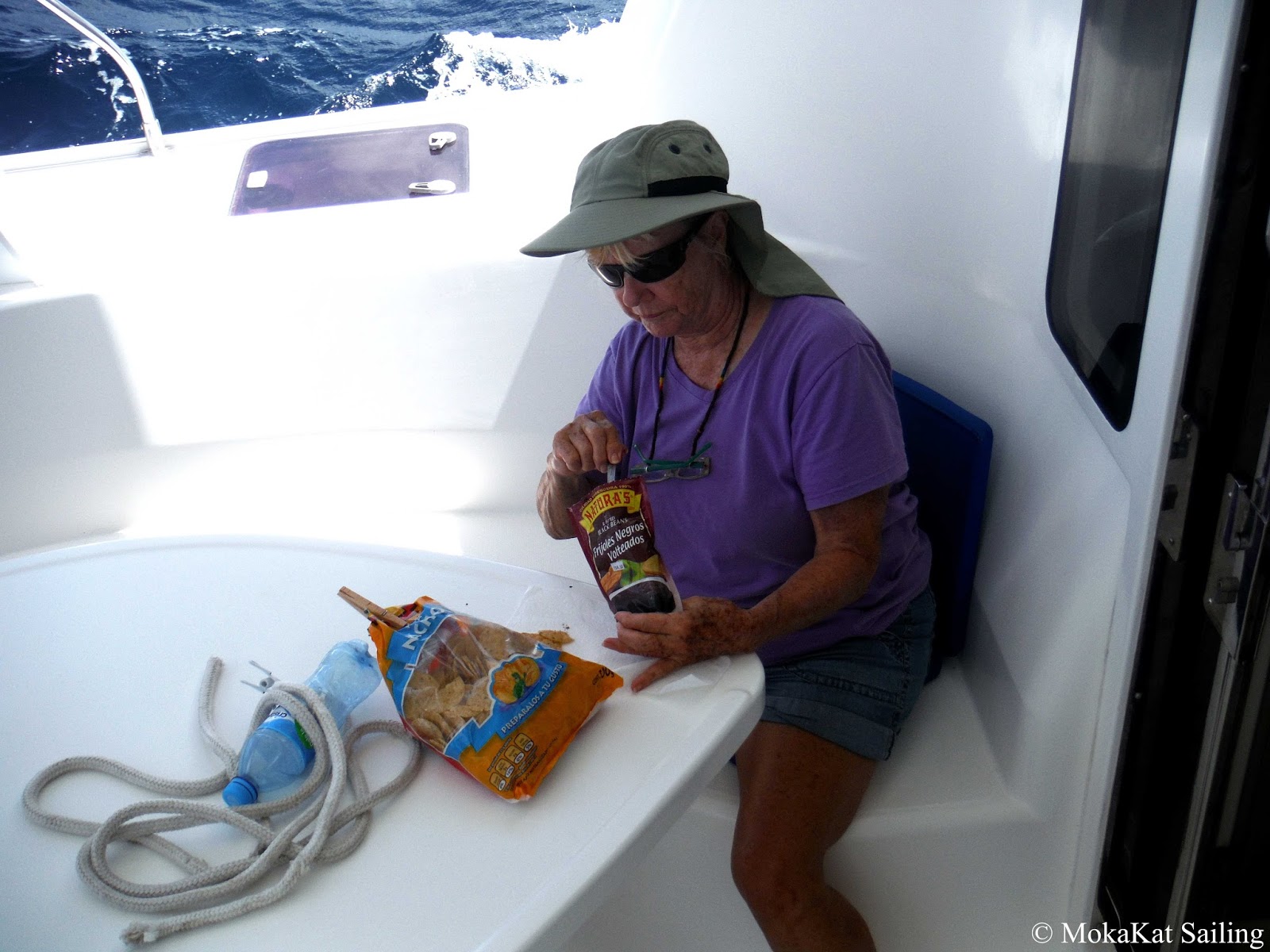 My mom enjoying time back on MokaKat 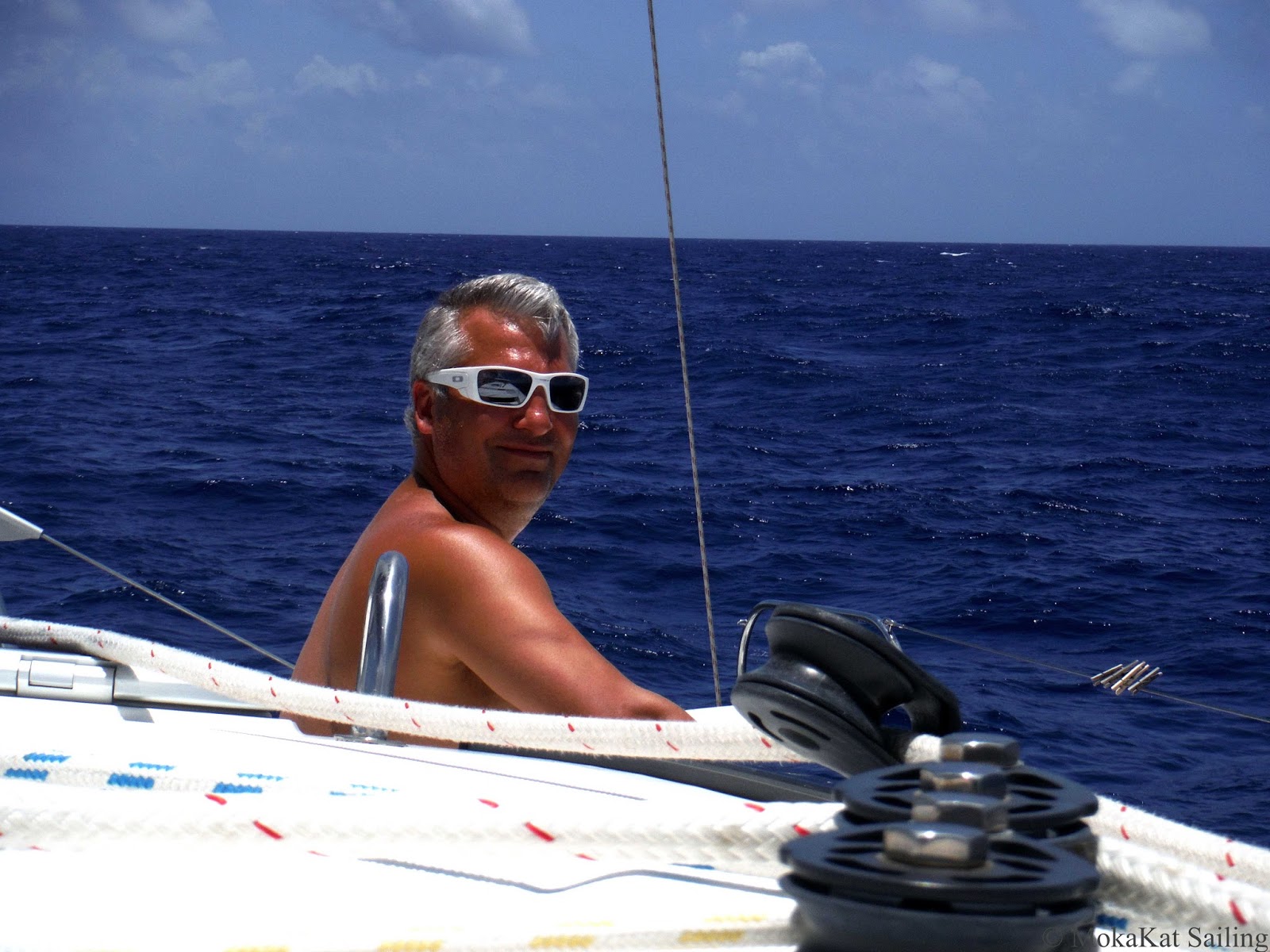 The sail out was fun, but our fishing was frustrating.  I lost two of my newest and largest lures due to faulty leaders.  We still haven't made it to Arrowsmith and the day was getting late, so we decided to head back to harbor.  In desperation, I pulled out my trusty 6 inch Rapala, the one that has caught many snapper and barracudas in Belize.  It is a little small for open ocean fishing, but it was the only thing that I had left.  It was beaten up, had many scratches from large teeth, and the paint was rubbed off in many places.  I put it on with a new leader, and let out the line.

It wasn't just a few minutes before the reel started singing out!!!  Fish on!!!  Bubba ran to grab the rod and I took control of MokaKat.  The fish was running so fast away, that I had to turn MokaKat around and chase it!  This went on for more than 30 minutes, before we finally got control of the situation and could see that we had a large silver fish on the line!  A few more minutes and we were able to gaff a 41 inch Wahoo!!!  This was the new boat record, and weighed over 30 pounds! 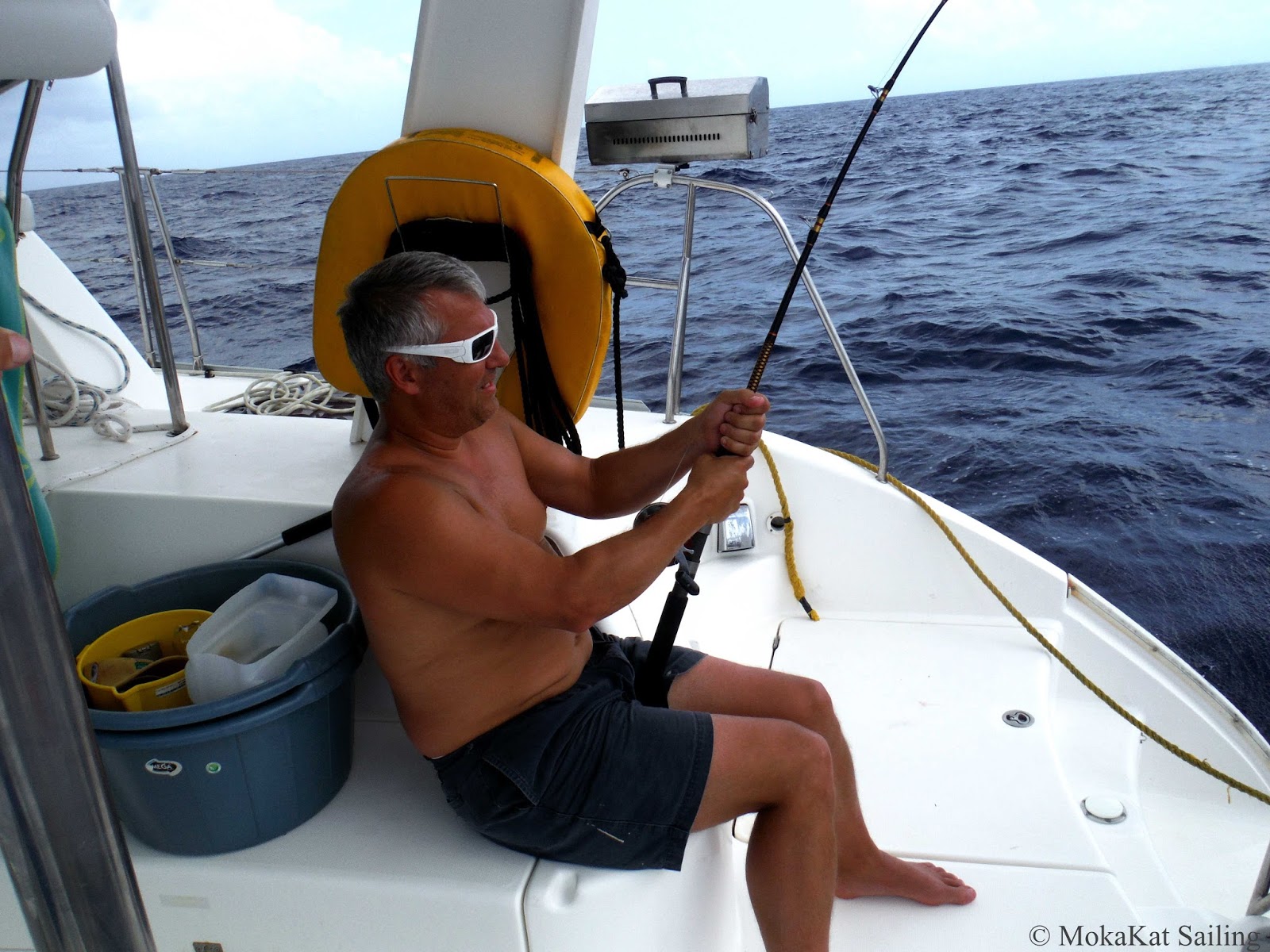 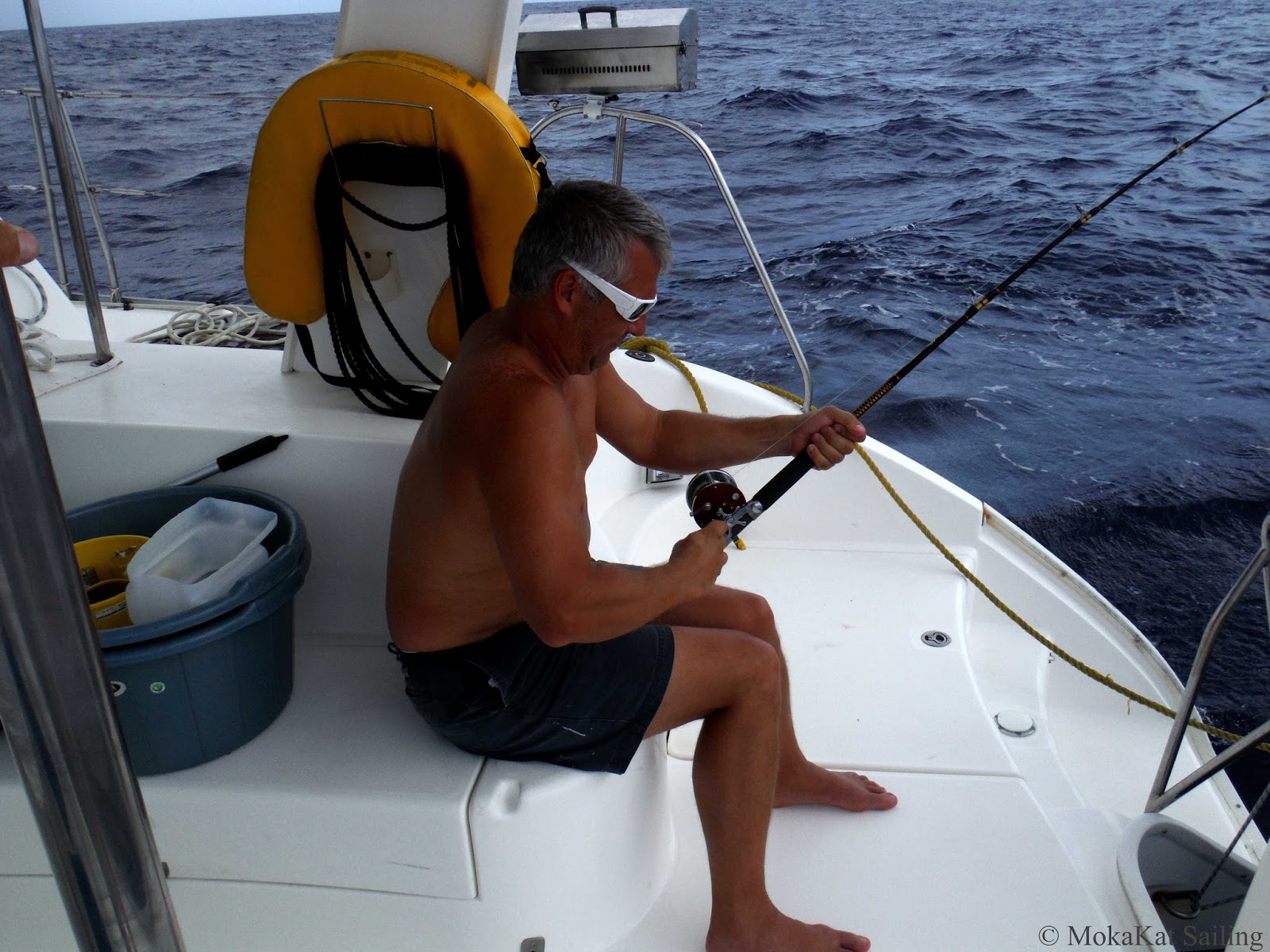 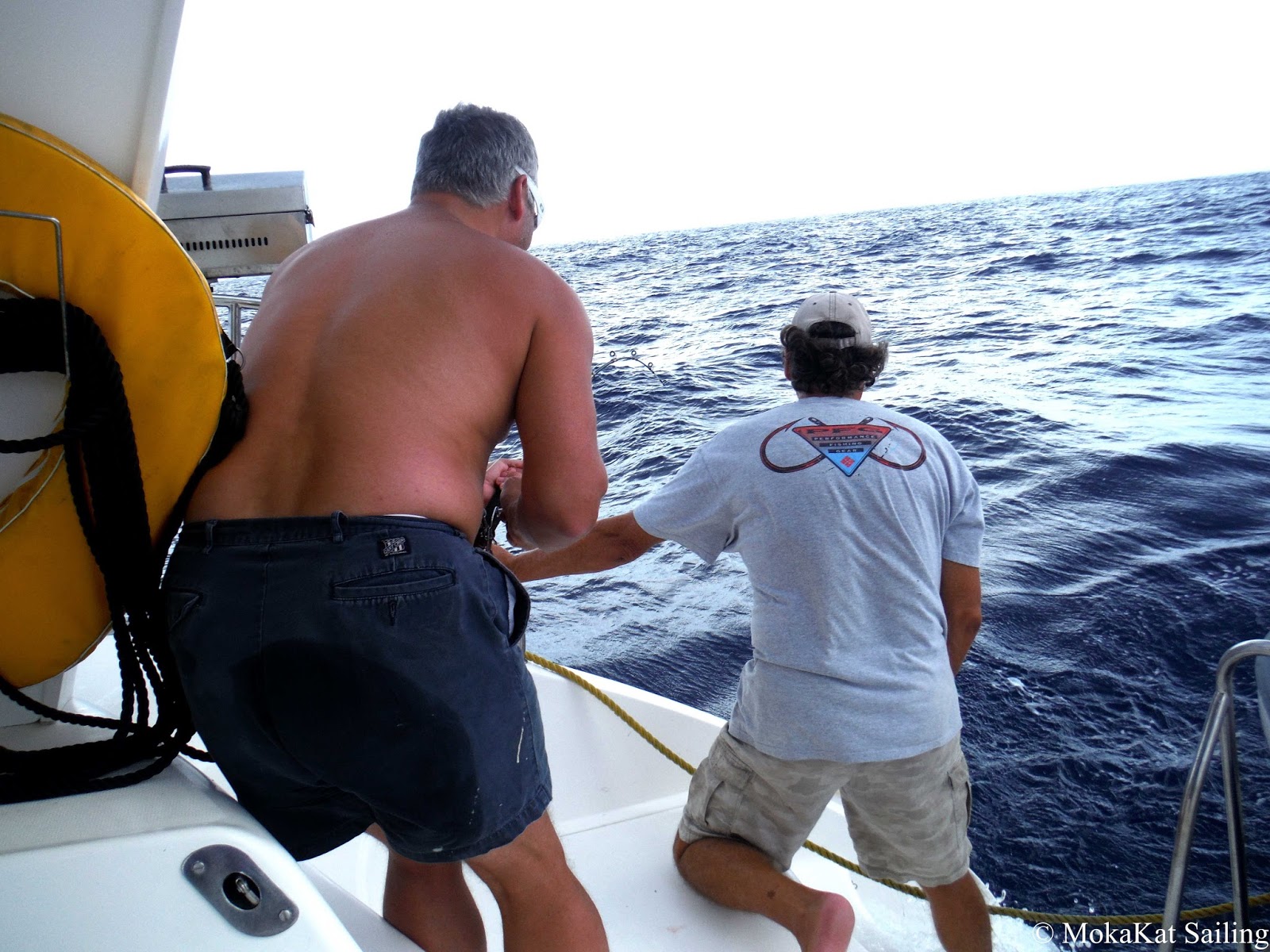 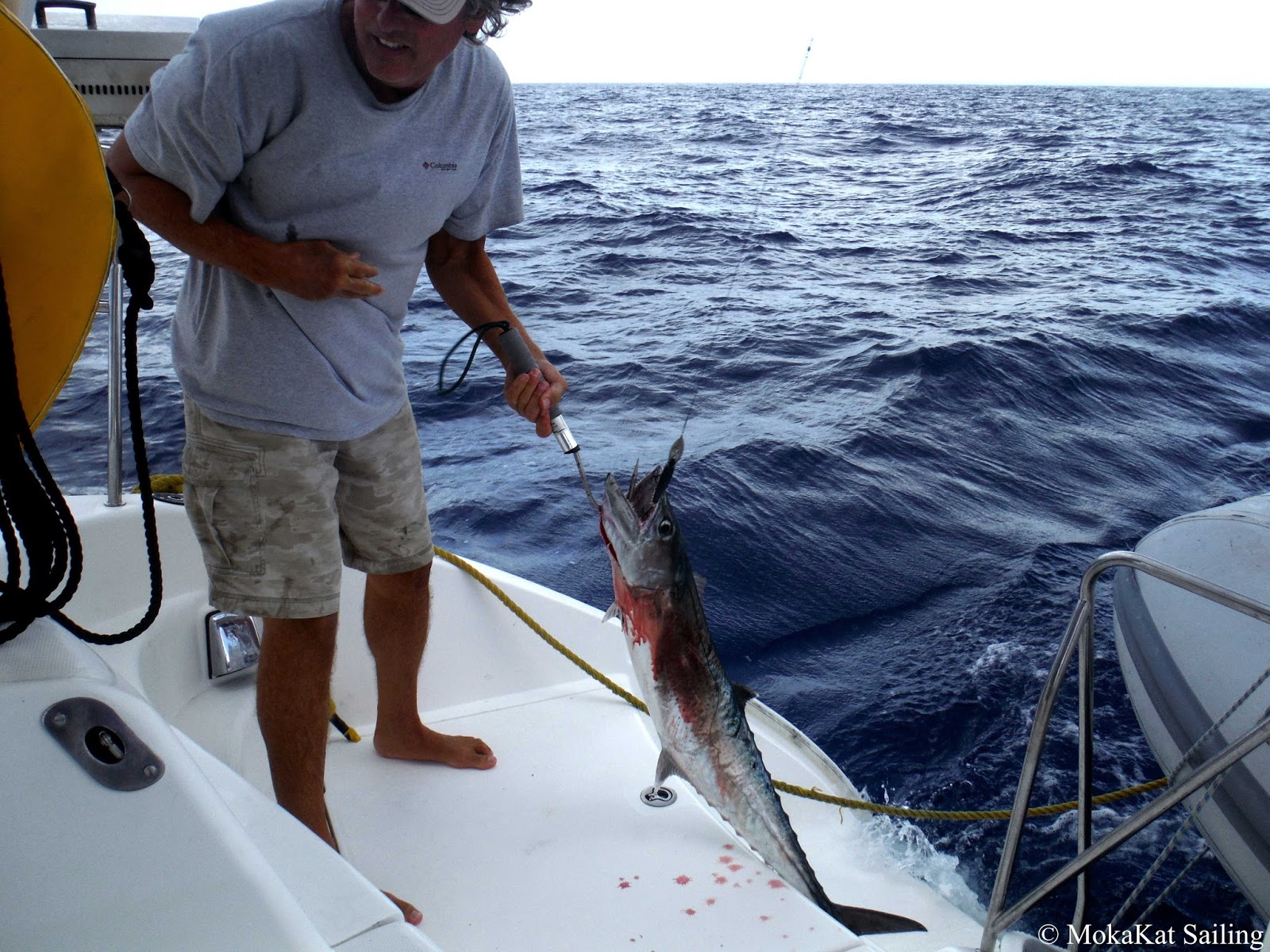 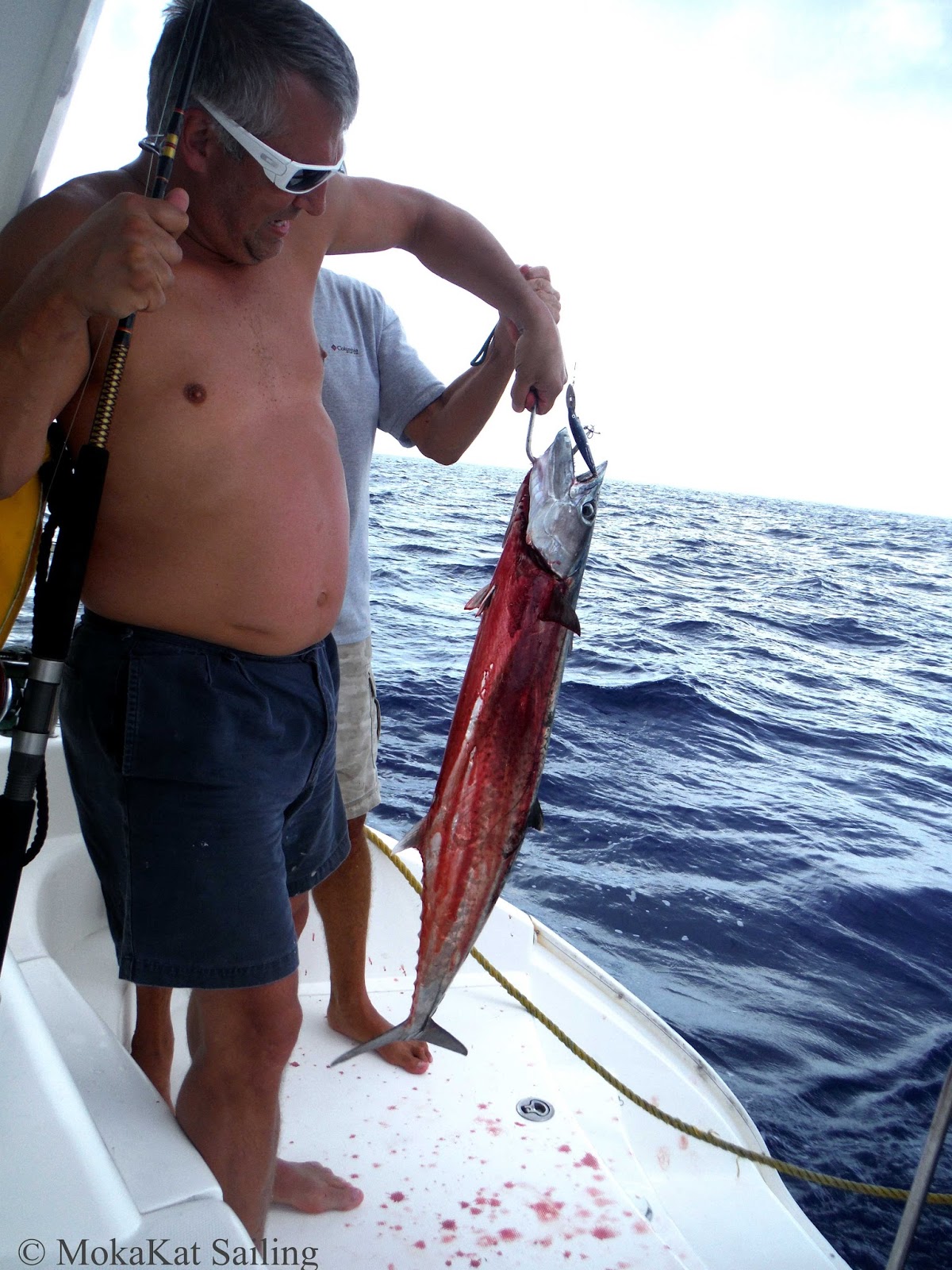 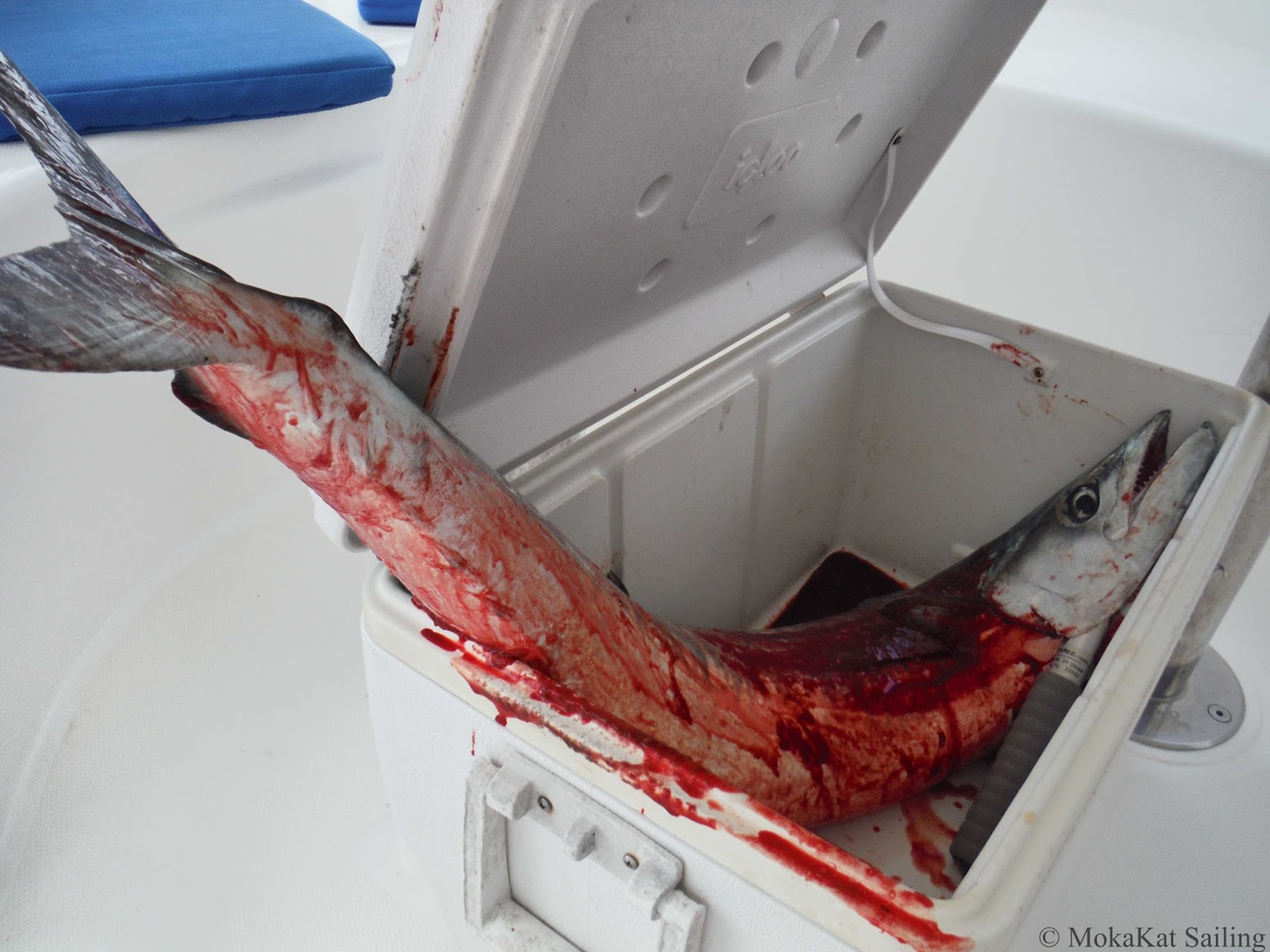 This is where Bubba said 'You are going to need a bigger cooler!!!'

The fish was really bloody, and it took a few minutes to clean up the boat!  Of course Bubba put the line back in the water and we continued fishing.  It wasn't too long and he had another....and another...and another!!! 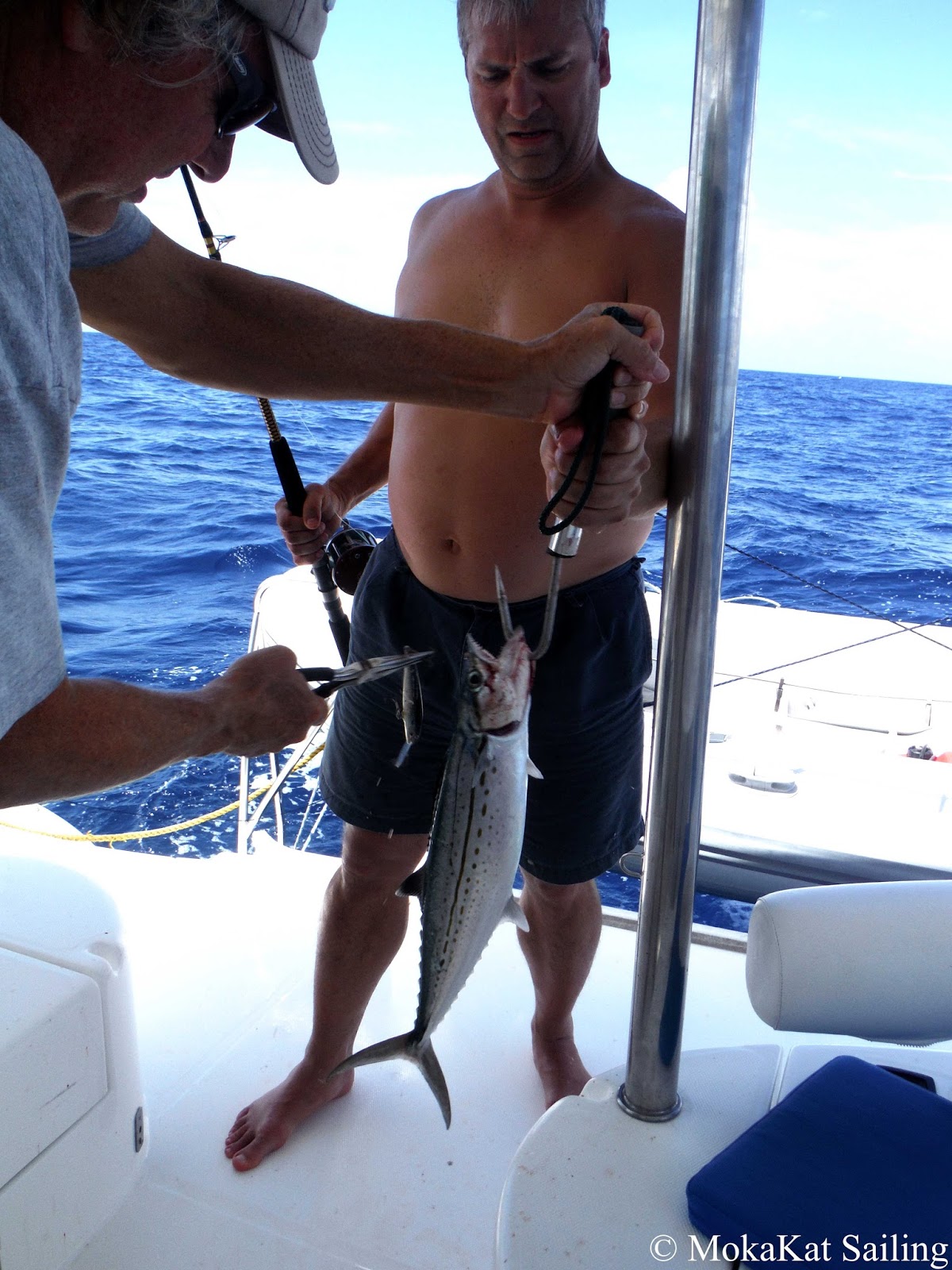 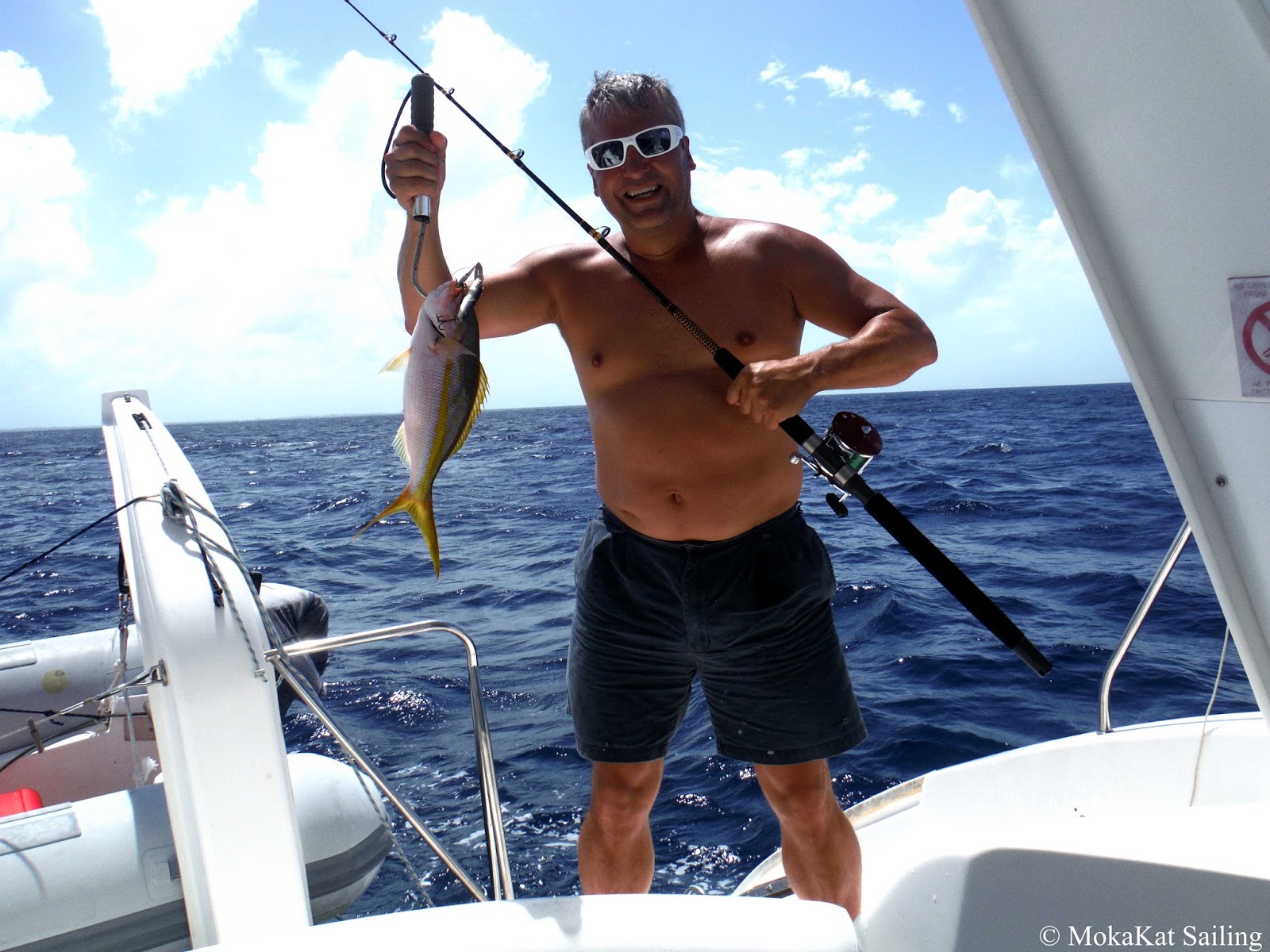 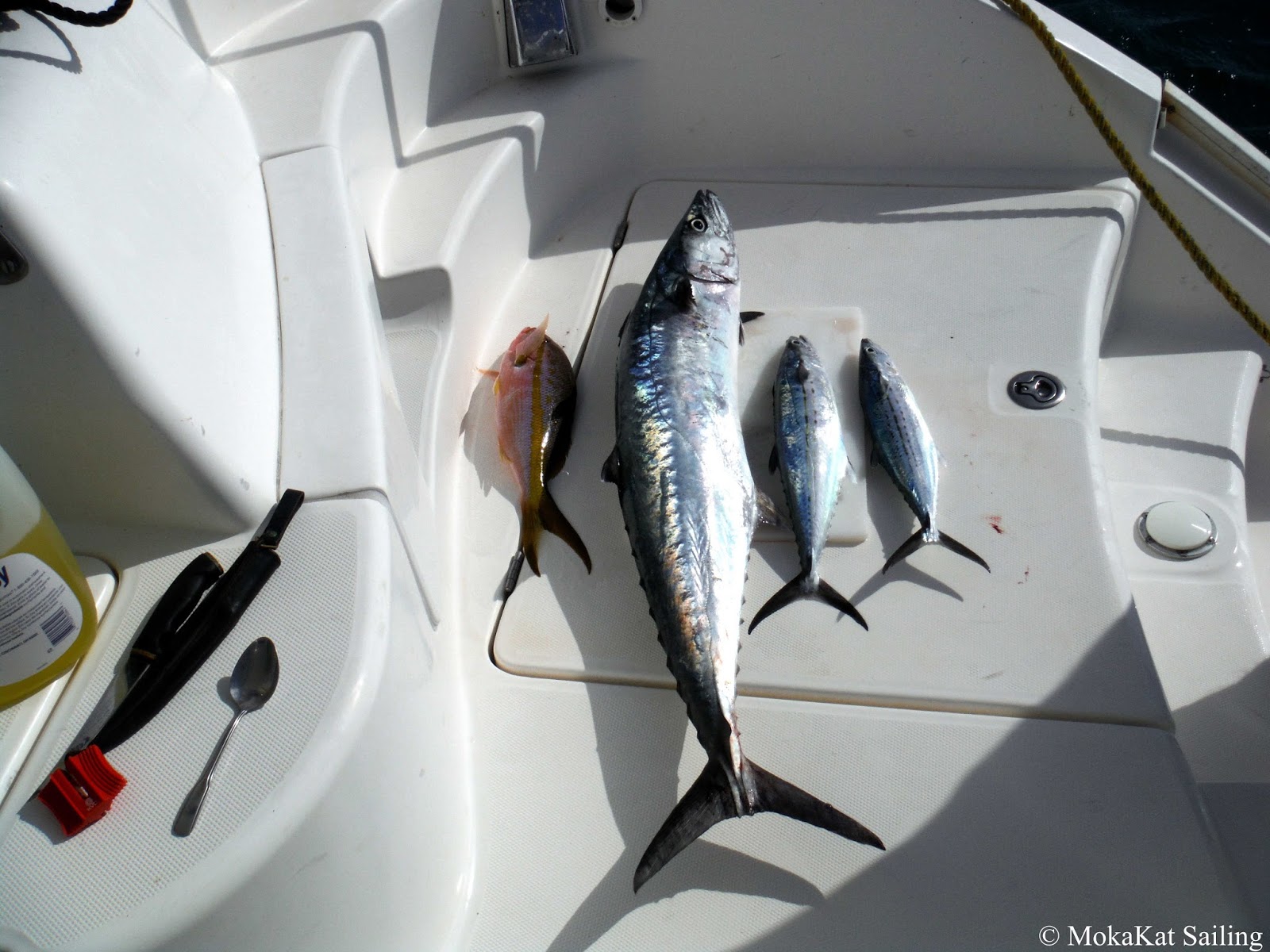 Sometime after the fourth fish, I made him stop fishing!  We were all tired of pulling in fish and stopping the boat for each!  We were ready to get back to the harbor and eat some fresh fish!

As we rounded the east side of Isla Mujeres the main sail suddenly came down!  We were on a downwind leg, so there wasn't any damage.  After running up to the mast, it looked like the main halyard shackle either broke or came undone.  The main halyard and the block ended up at the top of the mast, a project for another day,  Luckily, the main halyard was not damaged, an expensive repair.  We secured the main and sailed on the jib arriving shortly into the harbor.  There is always an adventure on MokaKat! 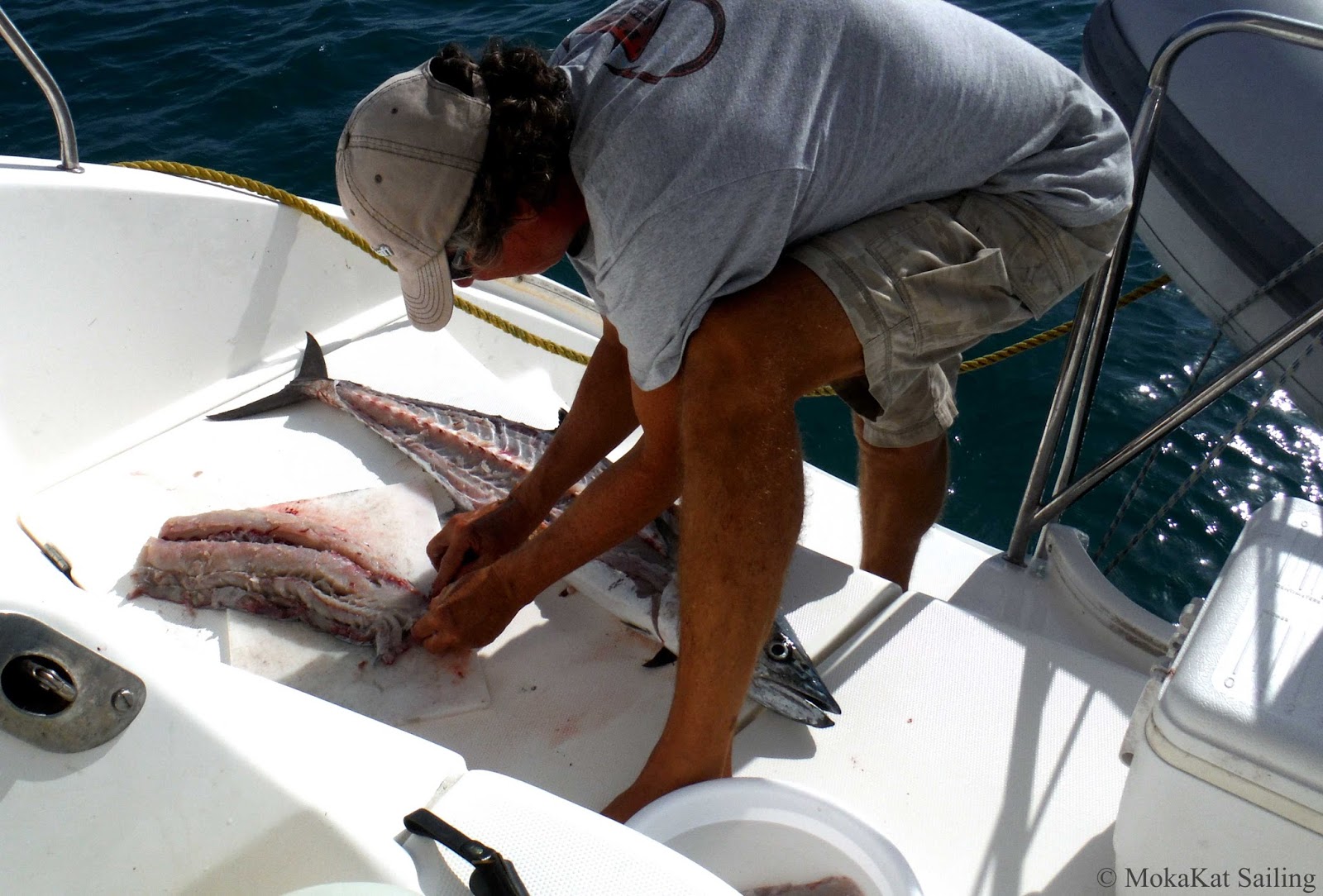 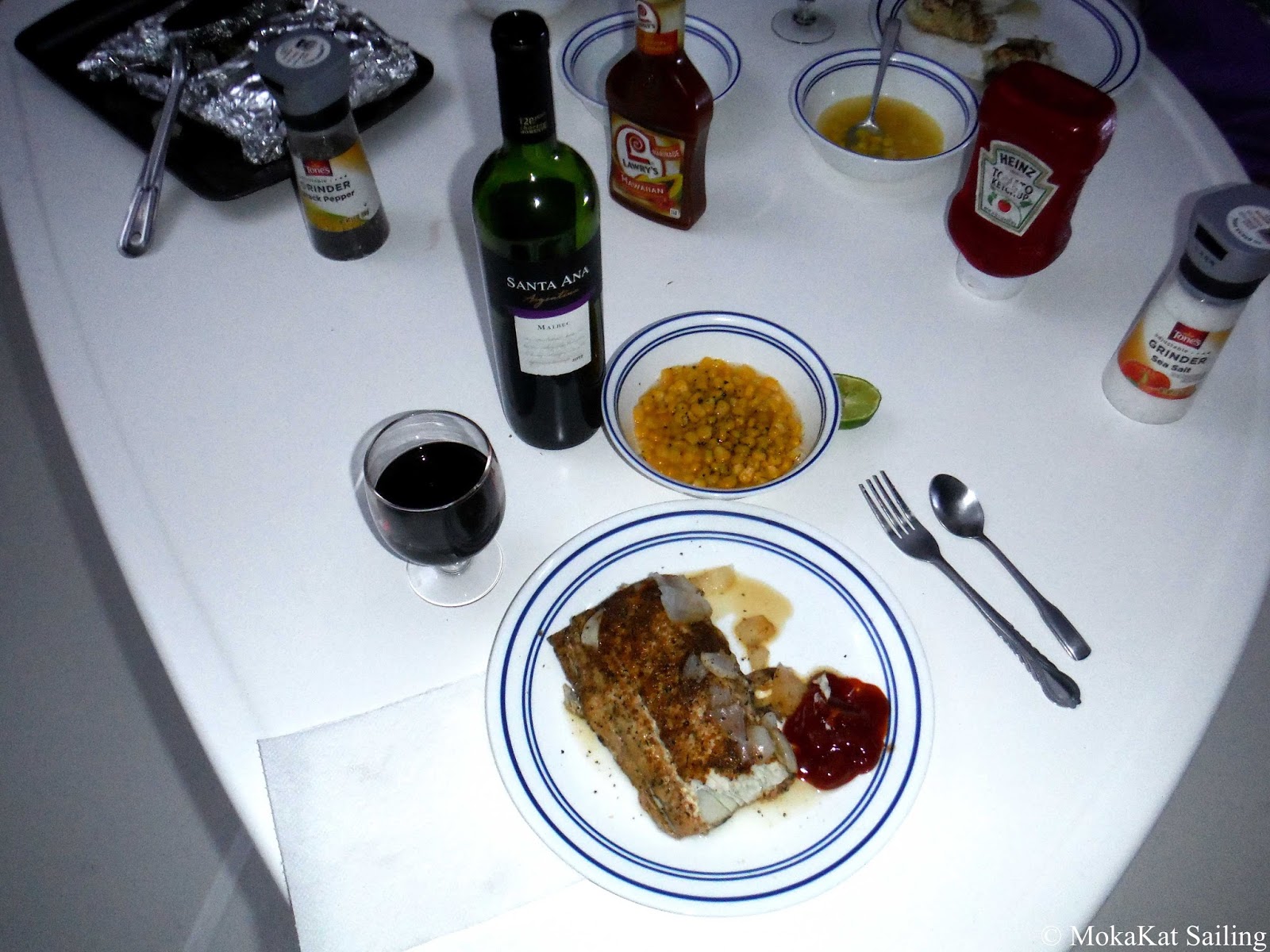 That night we had a great dinner of fresh fish cooked on the grill and enjoyed a beautiful sunset. 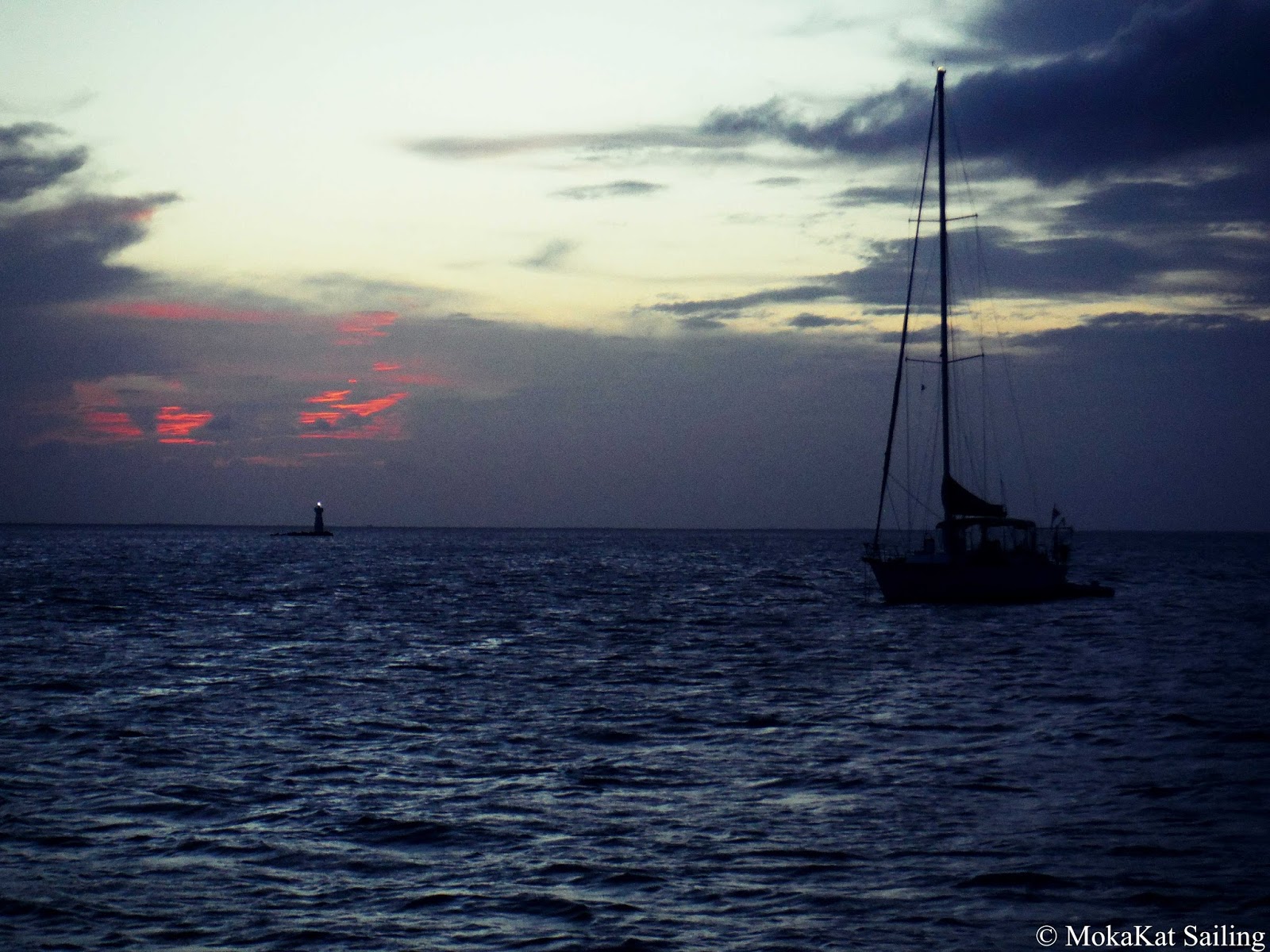 The next day we contracted our friend Zee, who was an expert at going up the mast!  We did a  little bartering and he agreed to go up the mast and retrieve our main halyard.  We cranked him up the main using our spinnaker halyard, taking all of the safety precautions.   While he was up there, he took some beautiful pictures of MokaKat and the anchorage!  Thanks Zee!!!! 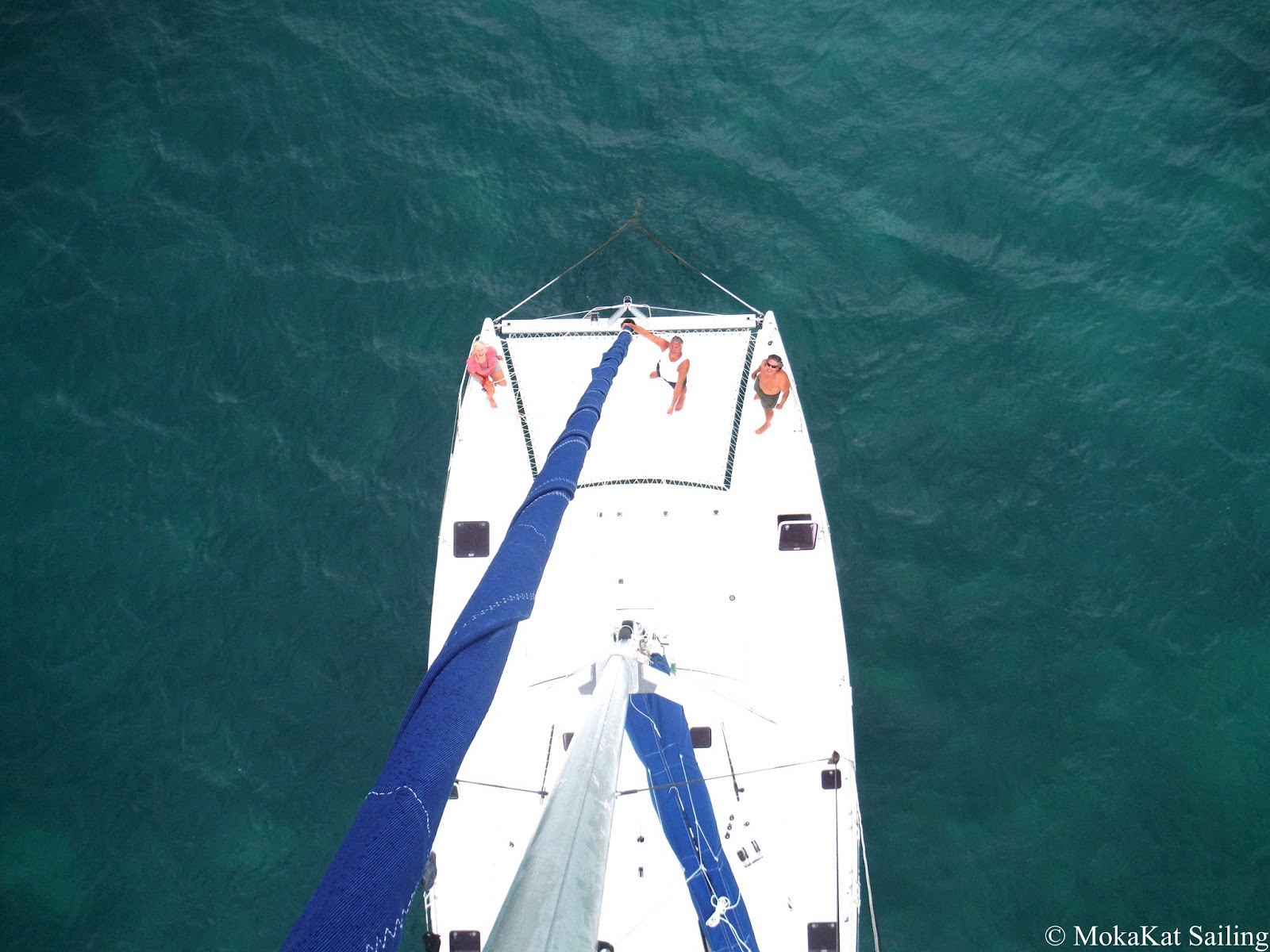 Yes, that is my mother, Bubba, and me down below! 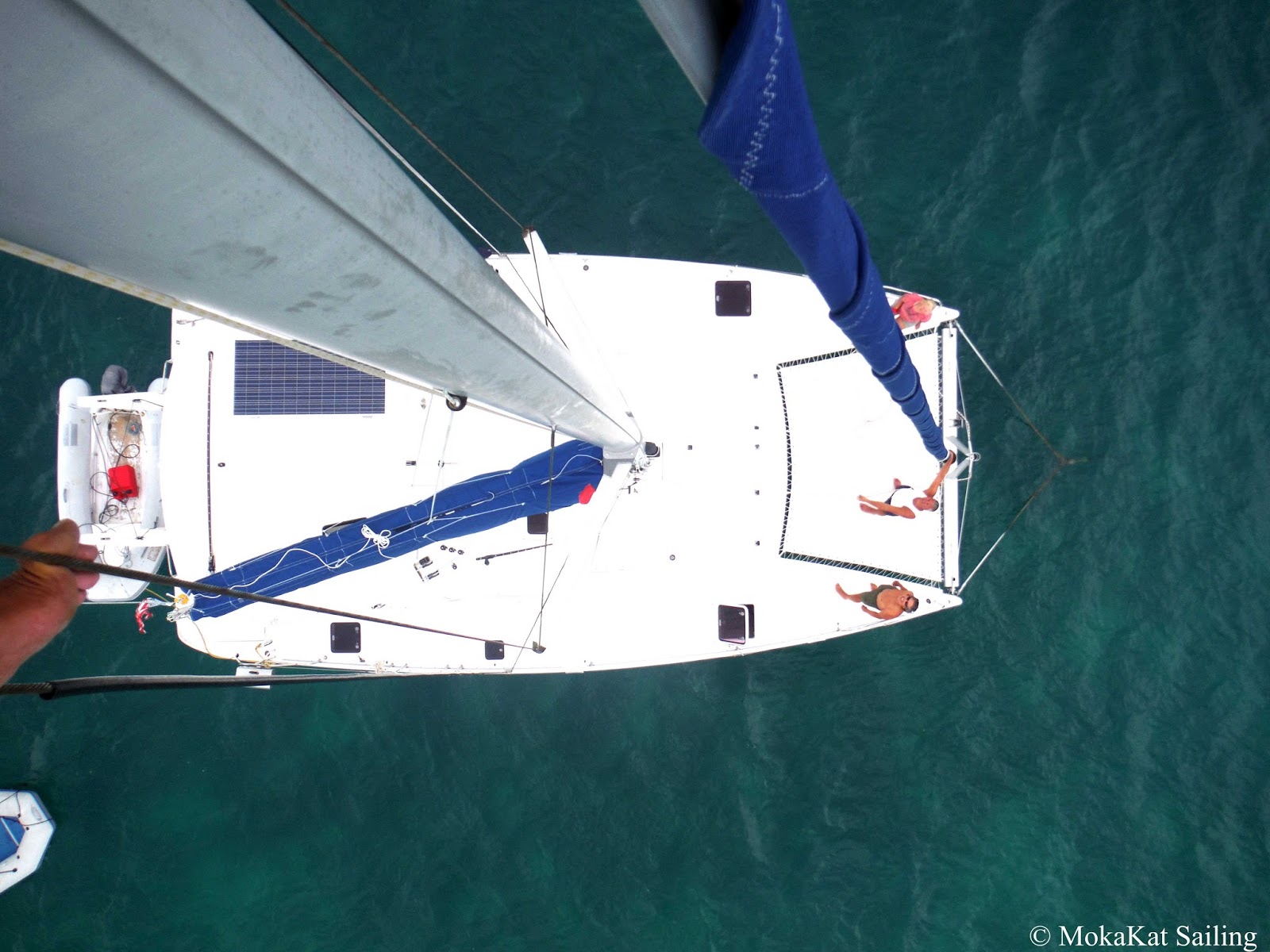 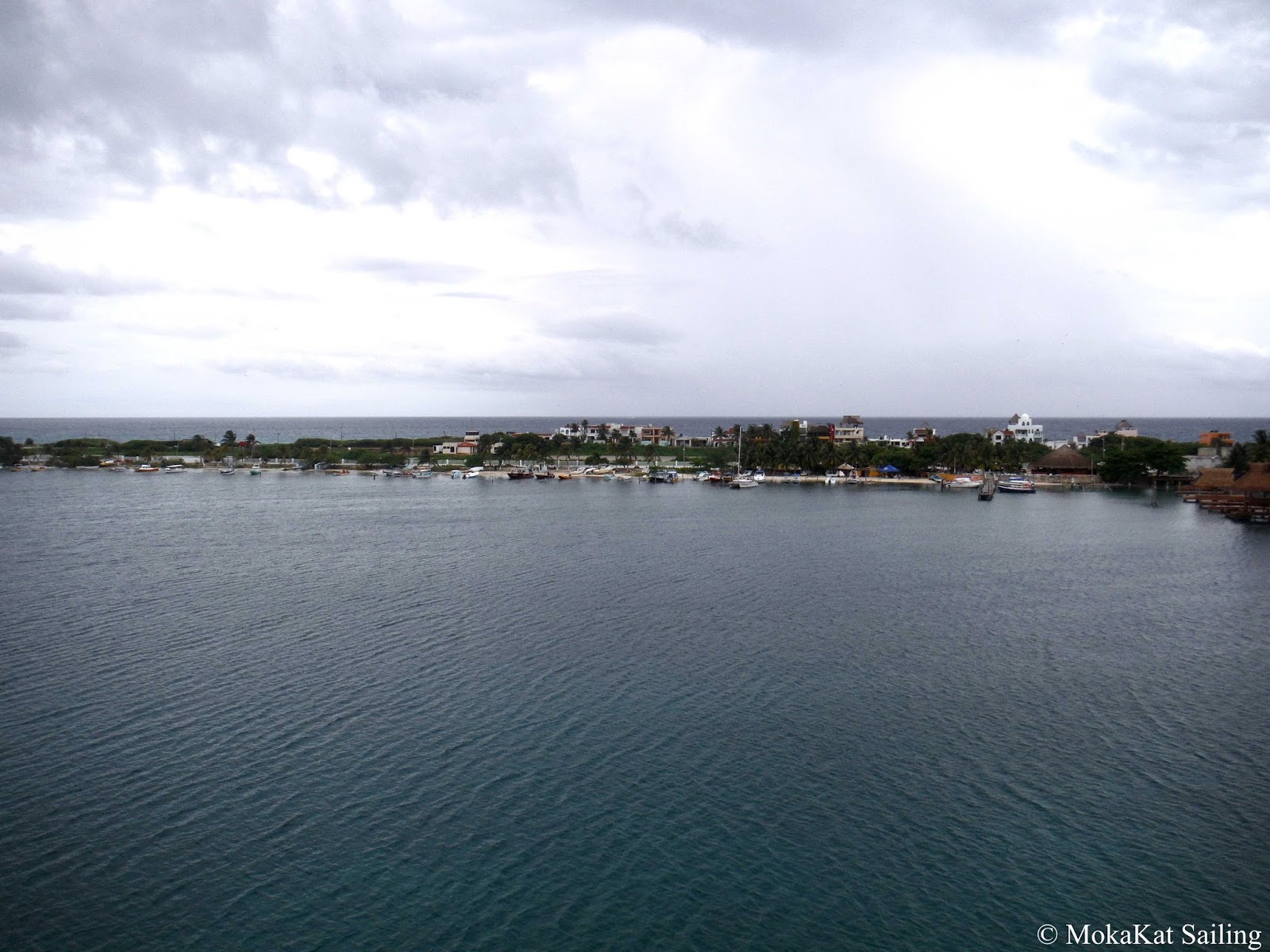 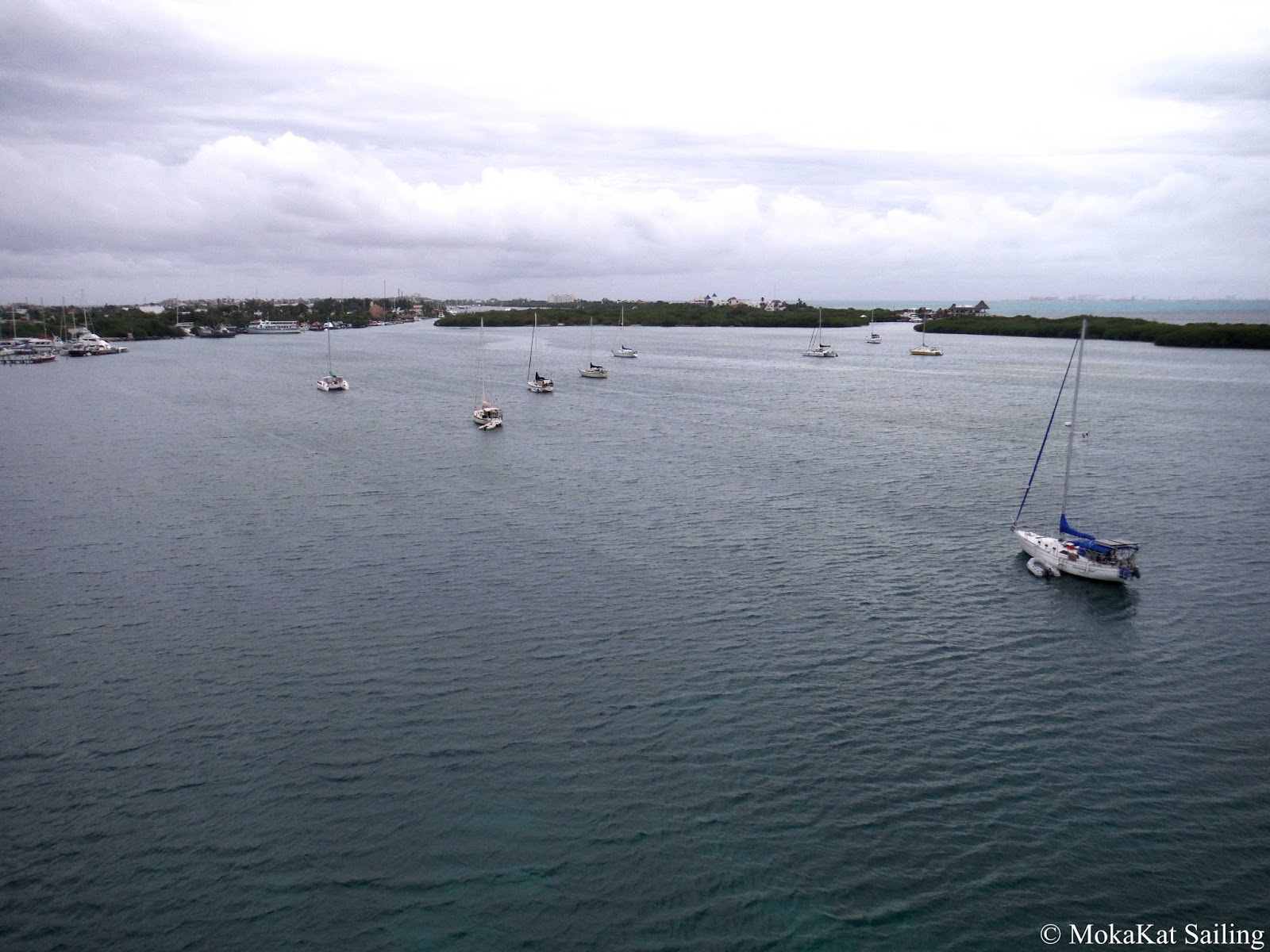 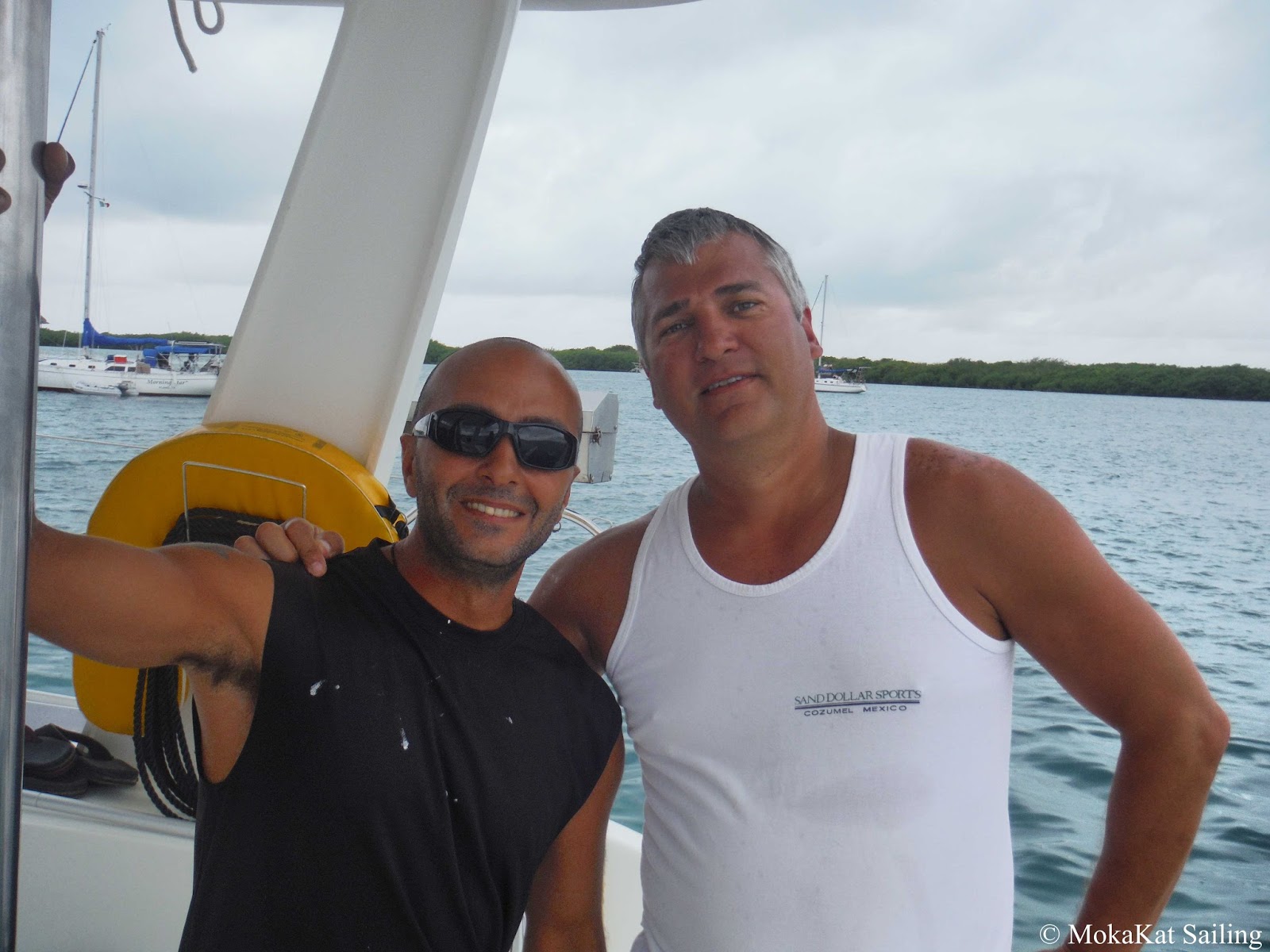 With Zee's help, we coordinated a Cruiser's Potluck at the Bahia Tortuga Restaurant, a very cruiser friendly place!  We provided all of the fish and everyone brought something.  All together there was more than 40 cruisers there!  It was a great time and everyone got to eat some of our catch of the day!  The new owners of MokaKat, Karen and Trey, arrived earlier in the day, and were able to attend, meeting all of the cruisers.  The potluck was a huge success and thanks went to Zee and Bubba for coordinating and providing the fish! 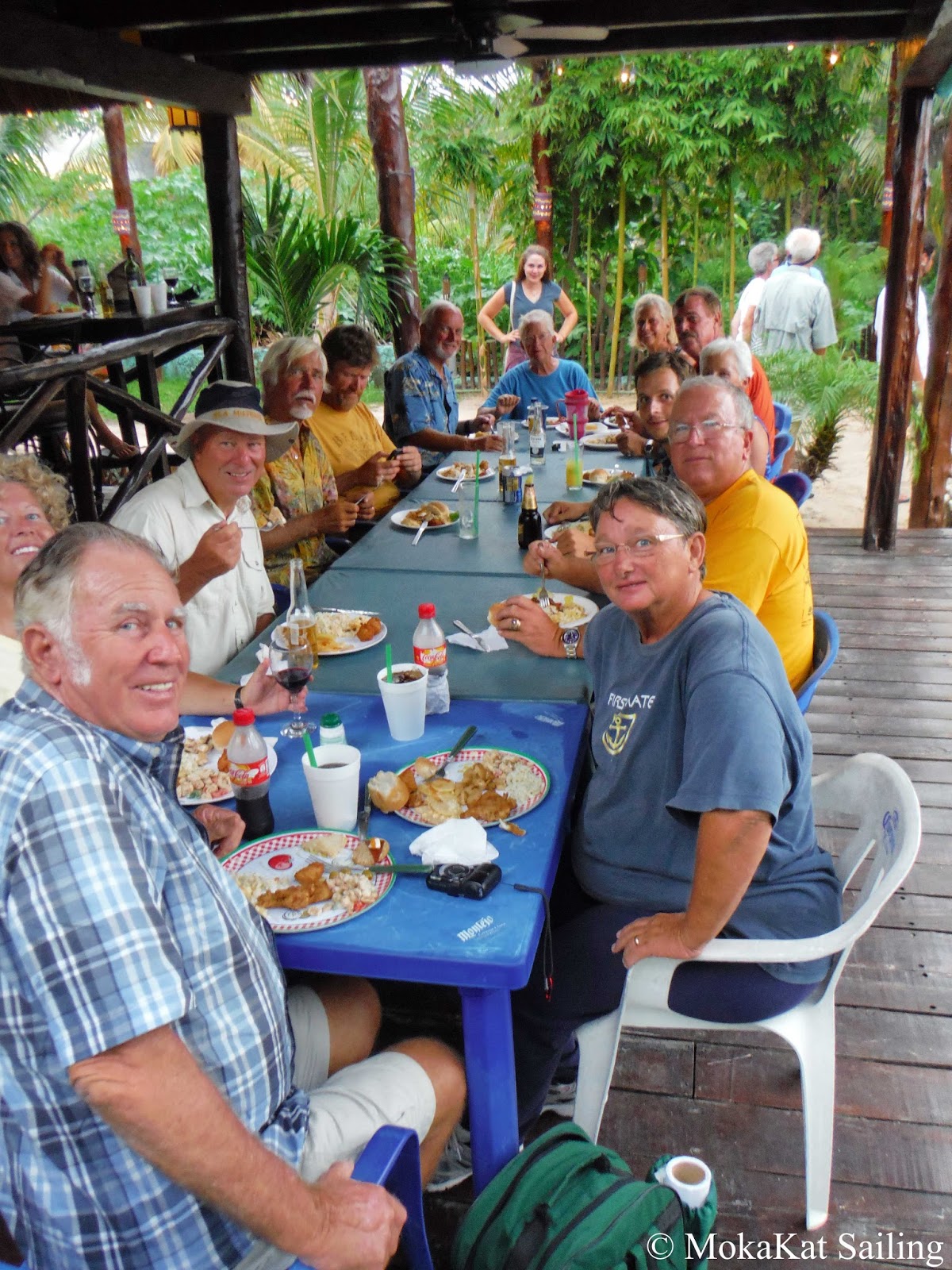 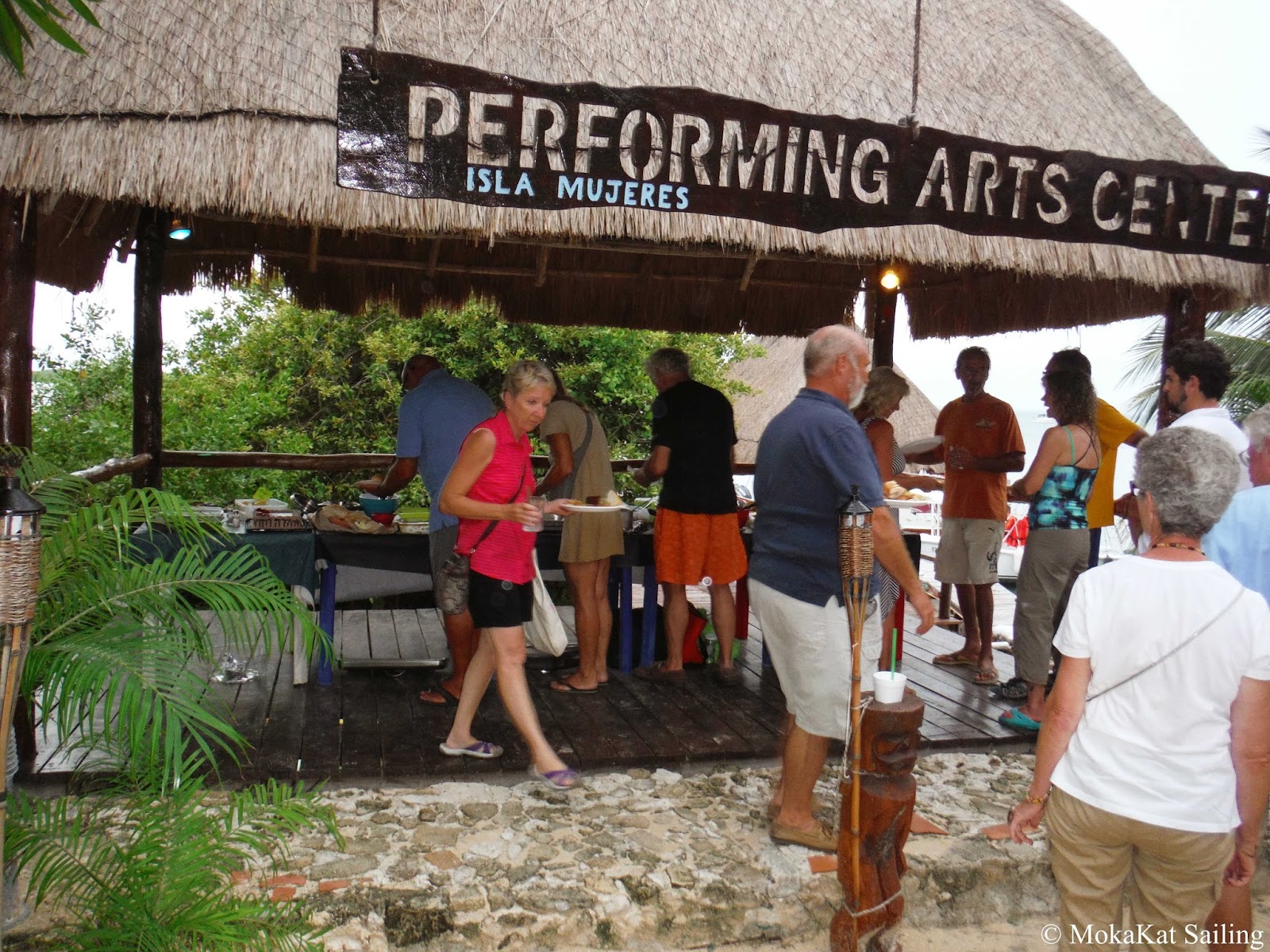 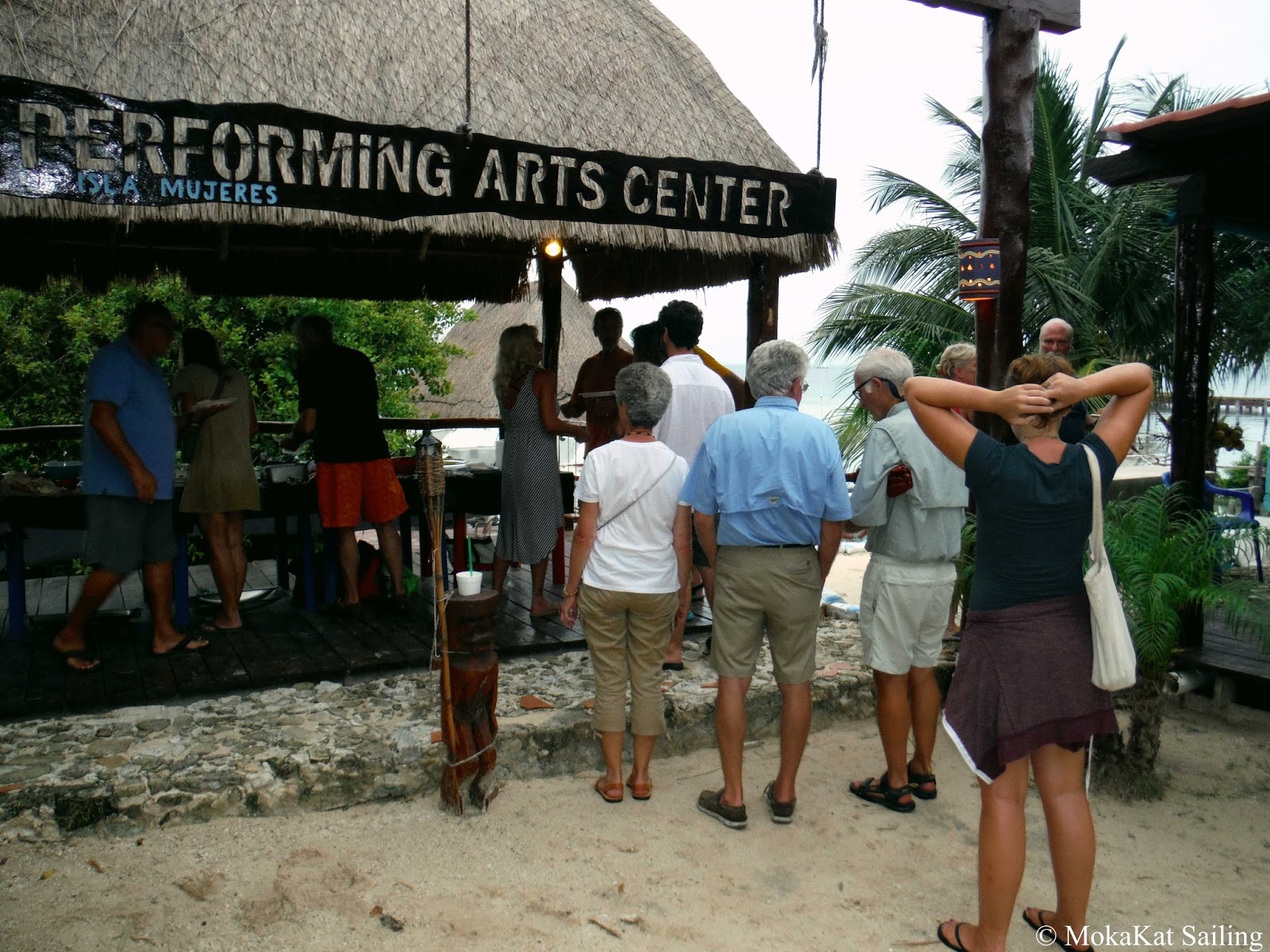 Our days on MokaKat were winding down.  We moved MokaKat into the marina to clean her up and get her ready for the new owners.  I also got an airline flight for my mom to travel to Belize in a faster method than sailing.  She flew out  the day of the potluck dinner and made it successful to Stepping Stones Report in Belize.

I spent a couple of days with the new owners to cover everything about MokaKat.  After a couple of fast moving days, Bubba and I headed back to Arkansas, leaving the cruising life behind.  My future was still unknown, but I know that I will be back cruising one day.

Bubba and I had our last night in Isla Mujeres.  It was raining, and I still made him walk a mile to the town! It was a fitting end to a great 10 months cruising.  We didn't end up in a Mexican Jail, but we did get wet in the rain.  A couple of margaritas later, all was well! 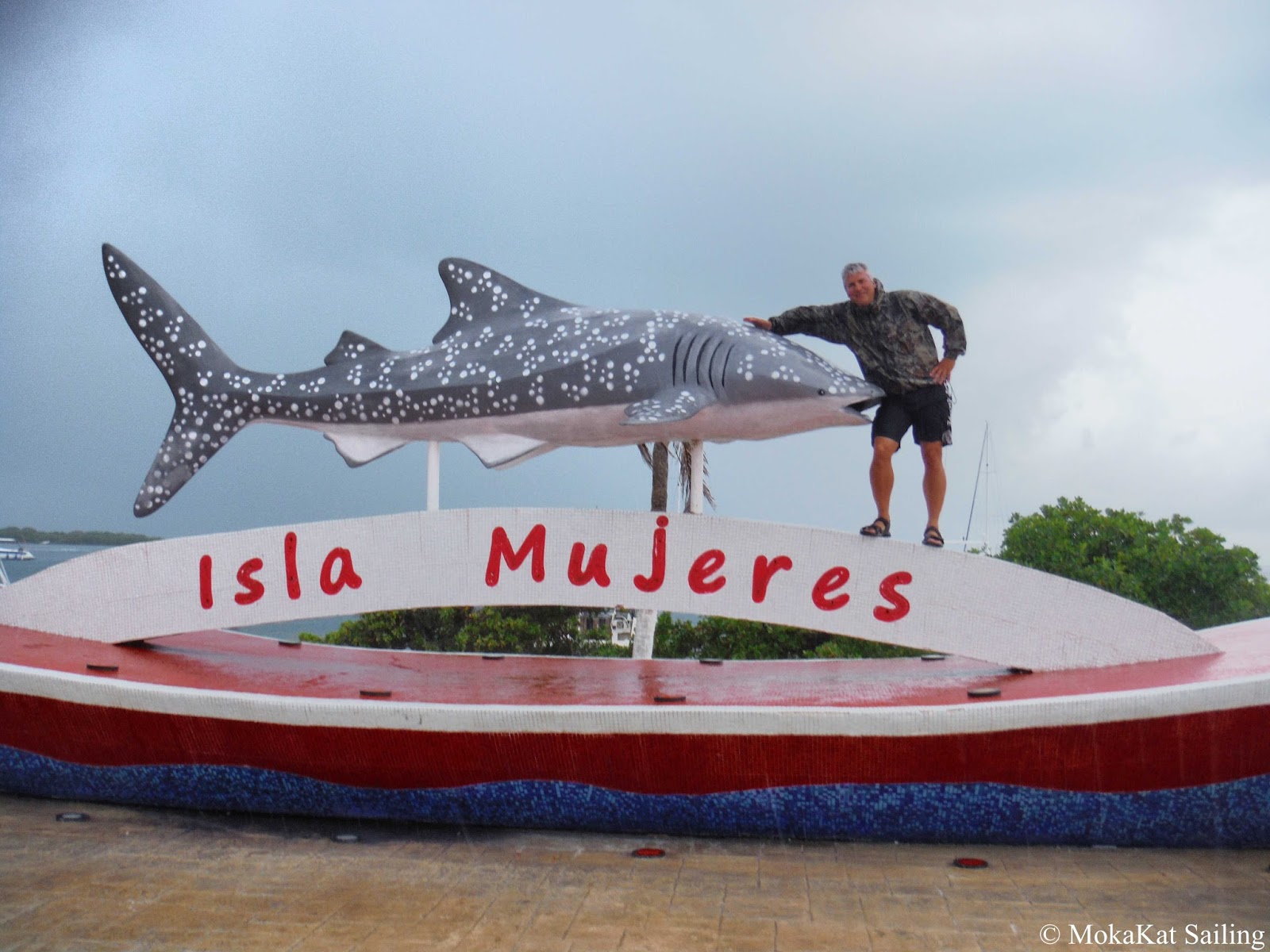 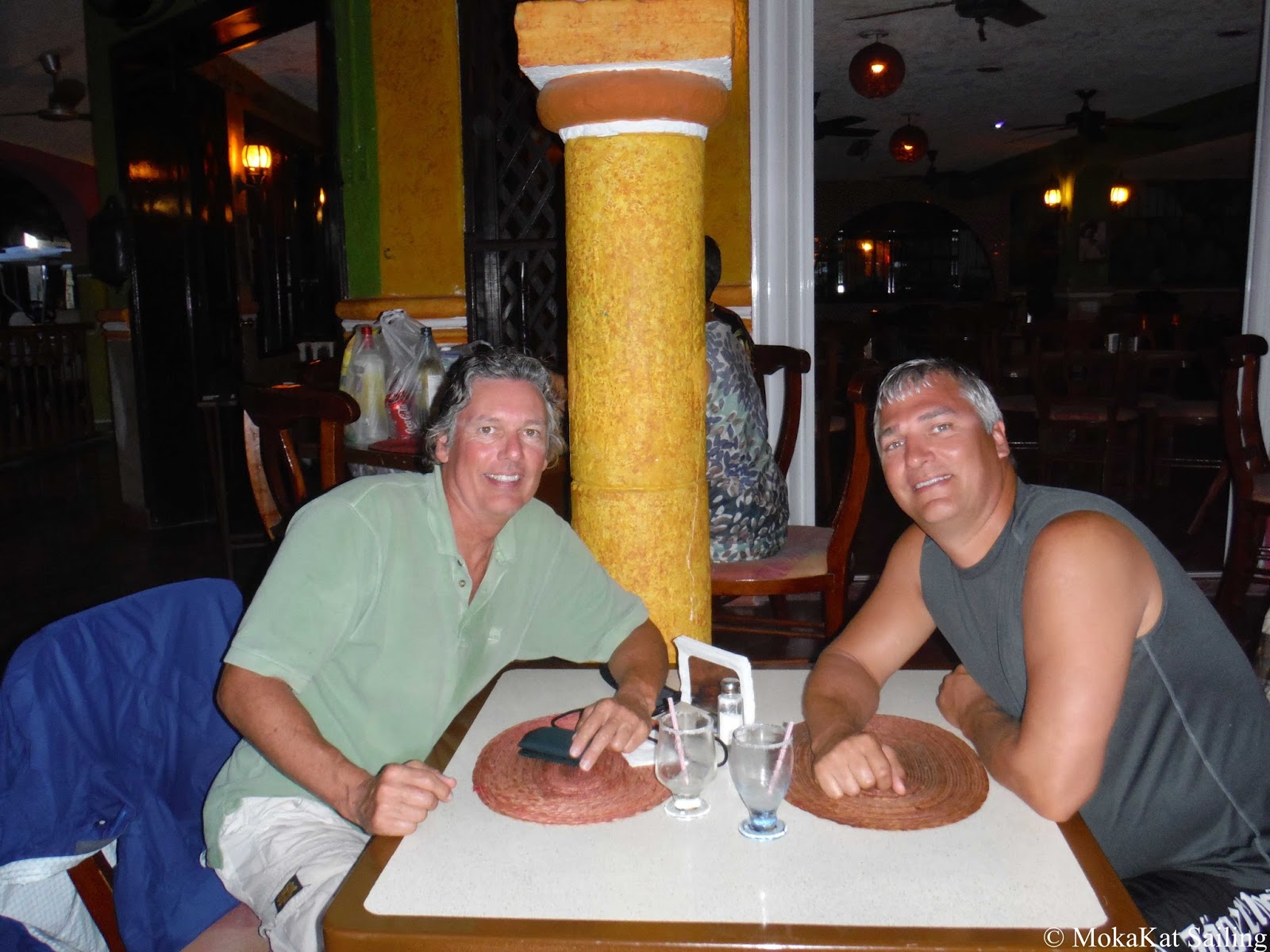 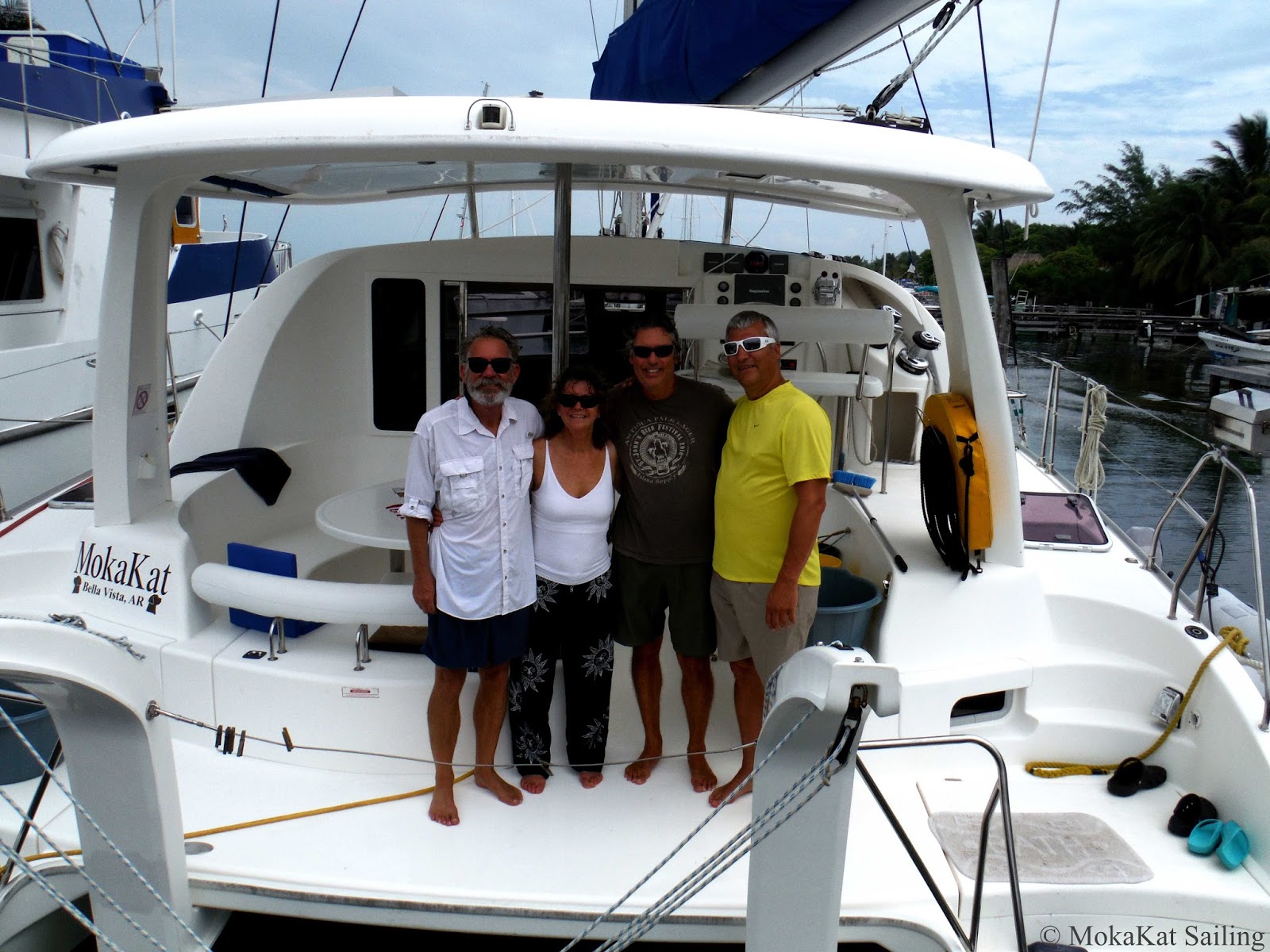 The new owners of MokaKat, Karen and Trey!  Fair winds to MokaKat!!!!!