It’s been a while since I have posted on the blog, so let me catch you up!  After turning over MokaKat to the new owners (Trey and Karen) on June 6th, I flew back to Arkansas and ‘normal’ life.  Walmart had been very generous in granting me a 12 month leave of absence (LOA) for my sabbatical, and I had 30 days to find a position.  Life was extremely hectic, as I adapted back to living in the US.  I was also having withdrawals from my cruising life.

It was nice to drive to the nearest Walmart and be able to buy almost everything that you need in one trip!  It was also very nice to be driving again!  No more walking a mile and dragging a two wheeler full of groceries back to the boat!  On the other side, I had to deal with cellular carriers, internet providers, insurance companies, cable TV carriers, car registrations, and car repairs, along with my personal ‘honey dew’ list that one year of absence grew pretty large!  On top of that, I had the pressure of finding a position at Walmart before my 30 day period expired, leaving me unemployed!

Well, I survived my first month back, and knocked many items off of my personal list.  I was very fortunate to find a job back at Walmart, as Sr. Program Manager for our International Data Centers.  This was a perfect fit for me, with my international and infrastructure experience!  I am very grateful to have completed the loop and be back working at Walmart and receiving a paycheck!

So, yes, I am back into a normal life, my hair is cut, my son is in school, and I have to get up around 5:30 every day to head to work.  I feel refreshed to be back at work, as the year off really gave me the break I needed.  I very much enjoyed my cruising life, but needed to go back to work to finish up my career and take care of my family.  I plan on heading back to cruising life in 4 or 5 years, on a more permanent base.

Since I have been back, I have been asked many times if it was worth it, taking off a year and cruising.  Without a doubt, I always say yes!!!  I think that it is different for everyone, what dreams and passions that you have.  I know that the year before I sent sailing, dreaming about cruising consumed me totally.

Recap of my Sabbatical Timeline:
2012 – October – Attended a week long ASA certification class in St. Vincent and the Grenadines with Barefoot Sailing.  I was on a 42 foot Fountaine Pajot catamaran, and truly enjoyed the week.  I was certified in ASA 101, 103, 104, and 114.
2013 – Early Spring – Hired Gary Fretz as a broker and consultant to help me find a catamaran.
2013 – June - Made an offer on a Lagoon 3800 and visited it in the Bahamas.  Ended up passing on that boat, but fell in love with the Leopard 40.
2013 – July – Backup offer on a 2009 Leopard 40 Owners version was accepted, after the primary buyer backed out.
2013 – August 8 – Traveled to Placencia Belize with everything I could take in two suitcases, closed, and took possession of s/v CAPER, a 2009 Leopard L40 Owners version.   Our cruising life has started.  My mother came with me, as my older son just opened a restaurant in Arkansas.
2013 – August/September – Stayed at the Moorings Marina for these two months.  We traveled out to different cayes close to Placencia during our first two months.  The learning curve was high, but we survived.  We finally got acclimated to the heat and living without A/C.
2013 – October/November – Sailed to Rio Dulce, Guatemala at the end of September.  We were lucky to have Phil and Julie to help crew with us on the trip.  It didn't hurt that they were gourmet cooks!  We stayed seven weeks at Mar Marine in Rio Dulce, while we added solar to our boat and fixed some quirky engine starting issues.  We totally enjoyed the live on the Rio!  We assisted Mar Marine with their Wifi network issues and enjoyed Movie Night and Swap meets.  We also made many friends and attended many BBQs. (Thanks Geff, Rose, Robert, Yoanna, Julia, Mike, Oliver, Vivian, Marlena, and Sonny)
2013 – Thanksgiving/Christmas – We sailed back to Belize at the end of November.  We struggled with several cold fronts, and spend 3 days at Pelican Cays, hiding from the bad weather.  We sailed up to San Pedro, enjoying many cays on the way up.  My son, Blake was able to fly down and spend 9 days on the boat.  He was able to swim with the sharks and rays at Hol Chan Marine Reserve, catch lots of fish and lobster, and sail half of the country of Belize.
2013 – February/March – My wife Maria Paula received her US Citizenship and I flew back to Arkansas to celebrate with her and bring her back to visit the boat.  She stayed 10 days and enjoyed snorkeling and sailing in southern Belize.  Hatchet Caye was her favorite!
2013 – April -My sister and her husband (Kathi and Mike), enjoyed 10 days on MokaKat.  We started in Placencia and made it to Belize City to drop Mike off at the airport.  During their stay, we survived a 50 knot storm, seasickness and a hook in my thumb.  We ended up talking Kathi into staying on for an additional two weeks to help us sail to Mexico.
We also listed the boat with Gary Fretz on a three month contract.  I was trying to decide putting the boat into a charter company or selling.  Within a week, we had a good offer, so it was off to Mexico for the inspection, sea trail and survey.
We checked out of Belize from San Pedro on a Wednesday, and headed to Mexico out the pass at 6:00 on Thursday.  We enjoyed a 31 hour sail (240NM) trip, averaging over 7 knots and setting a boat speed record of 10.5 knots.  The sail was perfect with 20 knot east winds and a full moon.  We arrived in Isla Mujeres, Mexico and anchored by 1:00 PM on Good Friday.  We were able to check into Mexico on Saturday and were free to roam around, enjoying the restaurants and many new friends.
2013 – May – The first offer and acceptance fell through, and we had a backup offer within a few days.  Karen, one of the prospective owners, flew to Isla Mujeres and did an inspection and sea trial.  They purchased the original survey from the first buyer, and within a week, they accepted the boat!


We had several guests of the boat during the waiting period for the closing of the boat.  James, Kim, and Jeremy, our friends from Colorado spend a couple days with us.  My mother crewed on a monohull toward Belize, but had storms, steering failure, and general bad luck, ended up back in Isla Mujeres.  She was very happy to be back on MokaKat.  She ended up flying out to Belize after recovering a few days.    Bubba, my good friend from Arkansas also spent 10 days with us.  At the end of his stay, we turned over the boat to Karen and Trey, the new owners.   Bubba and I flew out of Cancun back to Arkansas, and my sailing adventure came to a close.

Wow, what a fast and exciting year! 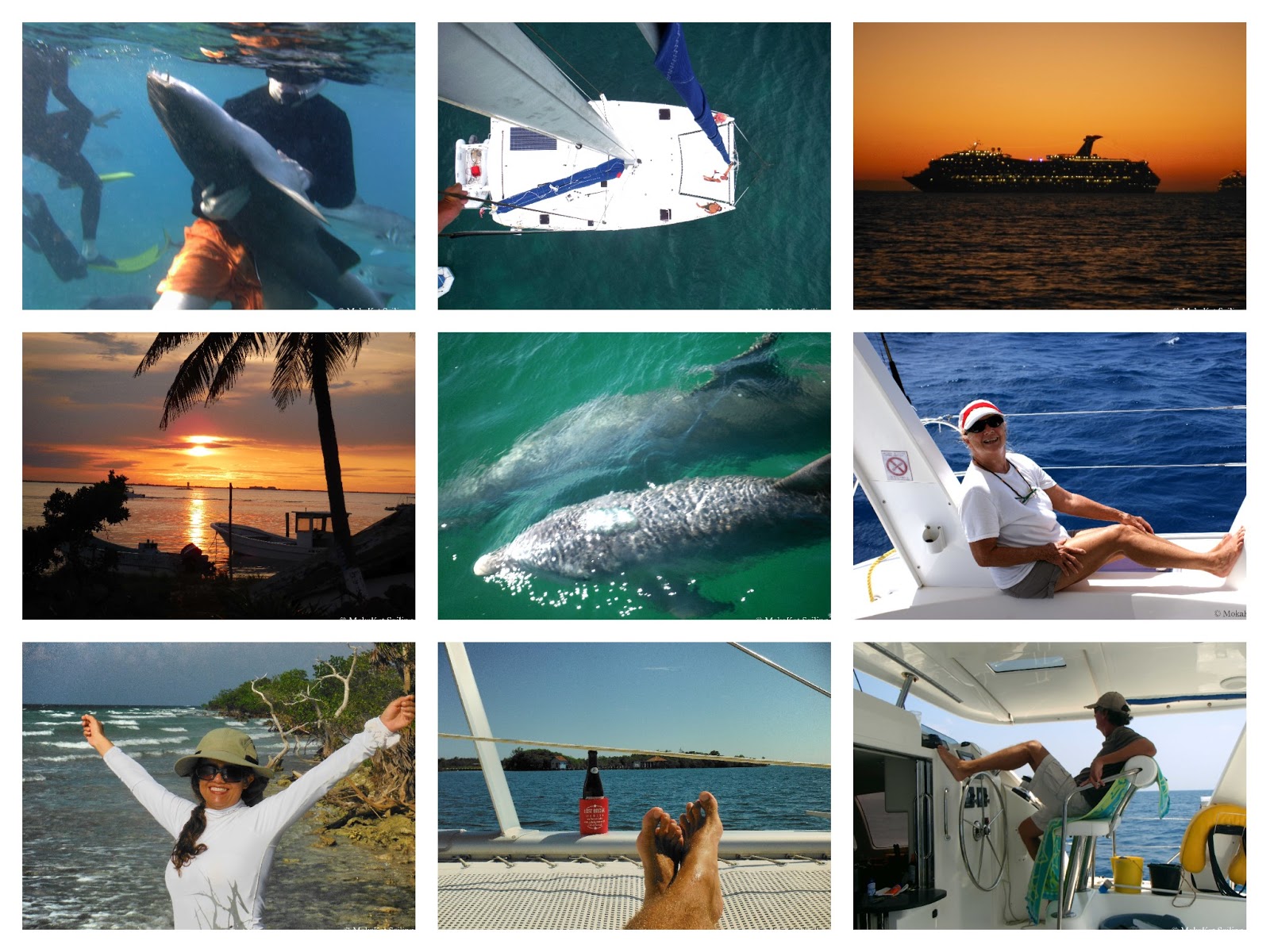