Rio Dulce, Guatemala to Belize - Day 3 and 4 - The return to Belize

We got up early today and had anchor up by 7:30.  There was some strong west winds and we didn't want to miss them!  We sailed for about 2 hours in good northwest winds hitting 6 and 7 knots in 10 to 12 knot winds.  It finally dwindled down to 5 and 6 knots of wind, but at least we were headed directly to New Haven, although down to a 3 knot average.  Mom was our new autopilot today, and got lots of sailing practice in the light winds.  Our autopilot is still broke, so we had to manually steer again.  I will fix it once we arrive in Placencia.  We ended up motor sailing once our speed dropped under 3 knots for more than 30 minutes.  The wind was doing it's normal shift to Northeast and usually dies for a hour or so during the switch.  We arrived in New Haven around 1:00 and anchored.  So it was about 5 hours of actual travel time to arrive. 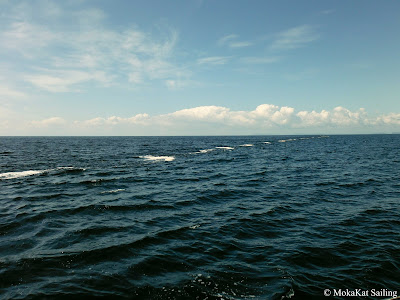 This was a foam line that extended for miles.  I kept seeing white showing up in the distant, and was nervous it was a trash line or a reef that wasn't on the chart.  I was glad it was only some sea foam. 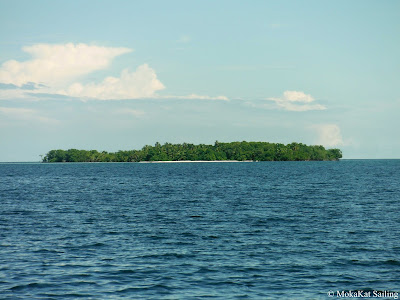 West Snake Key!  We were back in Belize waters!  We gave it a wide berth, as the water was very shallow there.  We stopped there on our way down with Phil and Julie.
We ate a quick lunch and I crashed for an hour or so.  When I awoke, heard a boat outside.  I walked out to see 4 guys in a fishing boat. They were wanting to trade some rum or beer for cokes or other beer beside Beliken, the local beer.  I gave them a couple of cokes and two Gallo beers from Guatemala and they gave me two Beliken and a nice snapper.  It is a little unnerving to be in such a remote anchorage and having a boat load of guys come up.  They were polite and only wanted to trade for a mixer to go with their rum.  One of the guys had to be 300 pounds and was quite large.  We have been impressed with the niceness of everyone we met in Belize so far, except the caretaker on Ranguana :).

Mom cooked some great baked chicken and potatoes and we had a very nice night.  The sunset was spectacular and the full moon came out just after dinner.  Another great day on MokaKat. 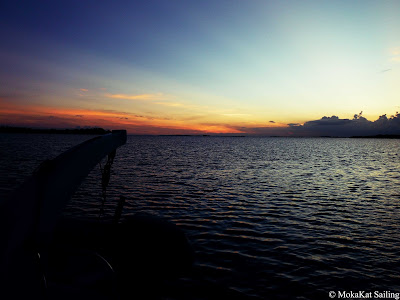 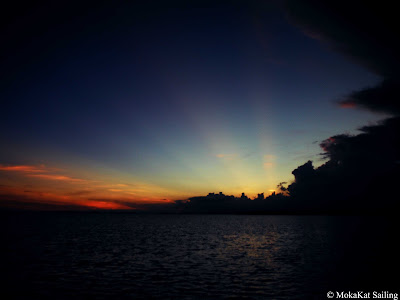 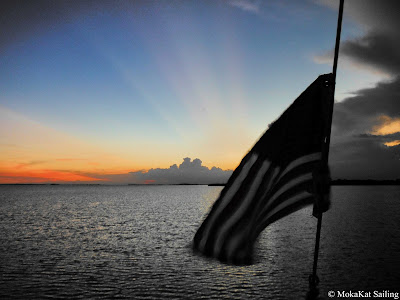 Day 4 - 28 NM
Again we rise early and had anchor up around 7:30.  It always seems that we rise early when sailing.  We also wanted to arrive in Placencia in time to check into the country.  We didn't want to give them any excuse to charge us any penalties.
Surprisingly, we had a nice east wind blowing around 8 or 10 knots, so we were sailing at around 4 to 5 knots.  There was a front that moved in and the wind bumped up to 18 knots, and our speed quickly accelerated to 7.5 knots.  It was too bad that it only lasted for about 20 minutes.  It was an exciting 20 minutes, as we were flying along, our fishing reel stated to sing out!  Yes, we have a fish on!!!  Mom grabbed the rod, but was struggling to reel it in.  I then gave her the helm and went back to fight the monster fish!  Well, it wasn't so big, but it was our first fish on MokaKat!!! Yippiii!!!   I quickly filleted the fish and put it in the refrigerator to go with the fish from the fishermen the day before!  Mom was still fighting with the wind and the wheel and we did some nice maneuvers.  I didn't give her any instructions when she took over the wheel, so she didn't know what our heading was.  We need to get our autopilot fixed!!!! 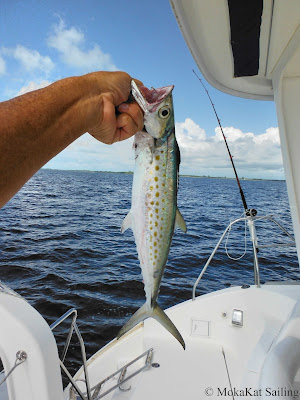 
Later in the sail, we were motor sailing, as the wind dropped below 6 knots, we had a huge strike on the fishing pole!  The line was screaming off, and I had to shutdown the power on the engine, and run back to grab the pole.  I could feel the weight of the fish for a few minutes, but then it threw the hook.  The lure had large teeth marks on it, so it could have been a barracuda.  I was disappointed that we lost it, but at least we are getting some action in the fishing department!

We stayed several miles off the coast of Belize heading north to Placencia.  We had to cross the shipping channel that goes to Big Creek, but there wasn't any ships coming.  We then headed back into the lagoon that goes back to the Moorings Marina.  We anchored just in front of the Marina, but out in the lagoon.  I then quickly dropped the dinghy, and headed with all of our paper work to check into Belize. 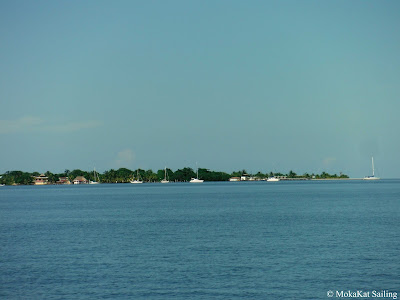 Placencia Harbor in the distant!


To check in, I have to take the dinghy to Mango Creek, and tie it up at the Hokey Pokey dock.  I usually pay someone to 'watch' it for me, and then take a taxi to Big Creek, about 5 minutes down the road.
On the way to Mango Creek, I saw a large splash in the bay in front of me!  It seemed very large, so I had to go check it out.  It turned out to be two fun loving dolphins that were jumping high into the air, flipping and spinning, before crashing back into the water!  I was in a hurry, so I was only able to watch from a distance but these creatures are inspiring, as they really enjoy life!
I then started following Mango creek as it snaked through the mangrove swamps.  At one point I took a right turn instead of a left, and ended up in a very small creek with swamp on each side.  I kept hearing the tune from Deliverance playing in my head, so I quickly turned around and headed back the way I came.  I then realized that I should have taken the left turn, and was back on track.  It was nice to see the dock at Mango Creek ahead.  I turned my dinghy over to the same old guy that I did last time.  He lives there at the dock, and he is the self proclaimed boat watcher!  I then caught a taxi to take me to the Immigrations office, Port Authority, and Customs offices.  The taxi will take me and wait for me at each stop for $25 Belize ($12.50US).
Everyone was really nice this time, and I quickly made it through all three offices.  It cost me about $345 Belize for a cruising permit until January 10th.  I quickly headed back to the boat, and took down the yellow quarantine flag, and hoisted the Belize visitor flag!  We were again legal in Belize!
We had a very nice sail up from Guatemala!  It was nice to be moving again and seeing different sites.  Our plans are to make our way north in Belize to San Pedro, on Ambergris Cay or Cay Caulker.  There are many cays between here and San Pedro, so we are excited to see a lot of Belize in the next month to six weeks.  My wife Maria Paula and my 13 year old son, Blake, will fly into Belize on December 22nd.  I will be happy to see them both, as it has been awhile since we were all together.  We hope to show them a great time in Belize!
We will have limited Internet in the weeks to come, but at some point I will update the blog with more posts.  Tomorrow, we will fill our water tanks, and head over to Placencia Harbor to stay a couple of days.  Then we will head north toward Belize City.
Happy Sailing!!!!