When we came to Guatemala we had several tasks that we wanted to get accomplished.  The first was the saildrive boot repair, which we completed the first week that we were here.  The second was to find and install solar panels.  Solar panels will allow us to stay off the grid longer without running the engines everyday to charge the batteries.  Usually, we need to run the engines a couple of hours a day to keep up with our usage of electricity.  I hate running the engines to charge the batteries!!!!  On the way down here, we had to motor almost half of the time, so our batteries stayed changed.  Once we anchored on the river, our batteries went so low that our refrigerator quit working.  It shuts itself off when the voltage drops below 11.5 volts.
The following post is a little technical, so skip to the pictures if it gets too boring!
Well, I really didn't know too much about solar panels and controllers when we arrived.  What is a controller, and why did I need to have one????  My friends Geff and Robert helped point me in the right direction.  I did several days of research and determined that I need to find a MPPT controller, which could take multiple panels and voltages, and feed the battery bank at 12 volts.  Geff recommended a 60Amp Morning Star Controller with a remote console.  After some research, this seemed to be the best controller for MokaKat, and would allow the addition of more solar panels or a wind generator in the future.  It was a little expensive, around $660, plus shipping and import tax, but would be the central control of my solar and wind power.
I was still shopping for solar panels, as the local recommendation was two 150 watt panels.  After some research, I decided on a single 300 watt panel that fit my hardtop better, and using the MPPT technology allowed the use of a higher voltage panel (the benefits of the Morningstar MPPT Controller).  A single panel meant less holes to drill in the hardtop, and only one set of wires.
Installation Steps:
1).  Determine where to install the Solar Controller.  I decided to install it under the sink, near the battery charger.  Access to the battery bus was easy, and I had room.  It is a little inconvenient, as it is installed back on the left side of the sink, facing the stern.  Once installed, I should need to access it, as I should be using the remote to configure.
2).  Run remote console wire.  In my case this was from the nav-station on the port side across to the starboard side and under the sink.  This was pretty easy, but from the inside of the nav-station down to the chase I had to use my VHF antenna cable to pull a string through.  This is not a recommended method, but it worked with no damage to the antenna cable.  Now there is a pull string there for any future installs. There was a pull string for the chase to the starboard side of the boat.  This made it easy. 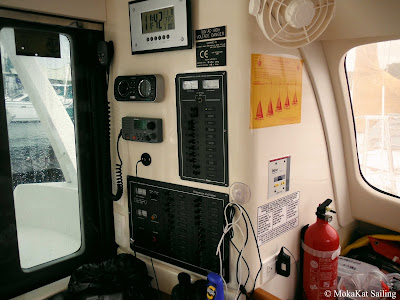 The remote console is on the right, just below the yellow sticker.
﻿ 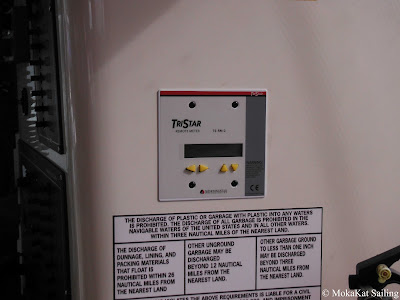 TriStar Remote Console
3).  Install controller and connect to battery buss bars.  I used large #2 awg stranded wires to connect the controller to the battery buss.  There is a large fuse between the battery buss bar and the user buss bar.  I connected the controller to the user side of the buss bar, both positive and negative.  I soldered a large ring on the end of the wire and bolted it down on the buss bars.  I was able to borrow a butane torch to do the soldering, as the copper ring was too heavy for my small solder gun.  I also ran a battery temperature cable from the controller to the battery bank.  I connected it on the negative side of the first battery.  The installation went fine, and I cleaned up all of the cables, using screw downs and nylon ties.  I hate messy cables!  I was a little sore and a few bruises the next day because of the strange positions and the sink cabinet door frame that I had to lay on! 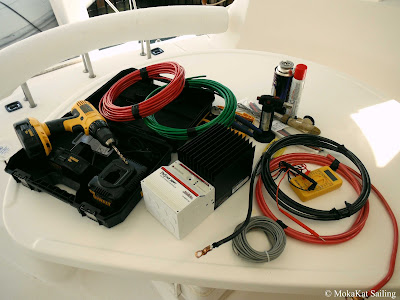 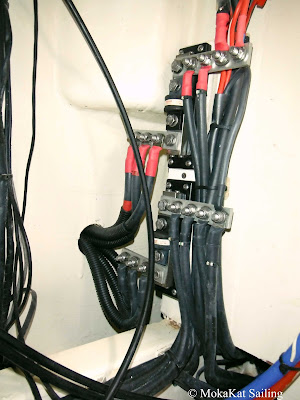 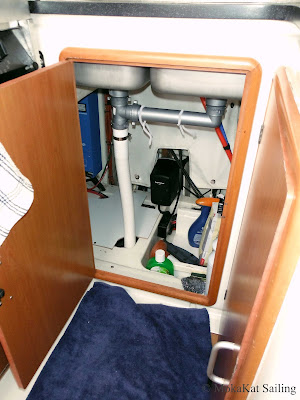 Under the kitchen sink install.  The controller is over on the left front wall. 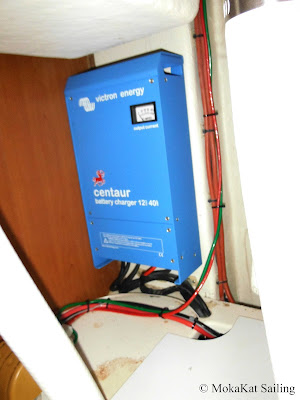 Battery Charger
4).  Run the cable from the controller to the hardtop.  I used color coded #6 awg stranded wire from the controller to the panels.  The pulling of this wire took a whole morning, as it was not easy to get the cable from the hardtop support down through the master stateroom's headliner and over and down to the sink area.  I had to drill a new hole in the base of the hardtop starboard support.  There is a hole in the metal so you just need to drill out the fiberglass.  It was just large enough for two #6 wires to slide through.  I then removed the ceiling hatch trim so that I could see into the headliner space.  I was able to fish the wire from the hardtop support hole to the ceiling hatch space.  I then, using a fish tape, was able to get a string from the hole at the upper back of the sink area.  It is the same hole that the electric and speaker wires come from.  I then removed the speaker on the starboard side of the kitchen and was able to pull the wire in that direction before pulling back to the hole where the speaker wires run to.  OK, that side is done, so back outside to the hardtop support.  I removed the plastic liner on the hardtop support beam and ran the wire down the recess.  I used nylon ties to connect the wires to the existing wiring.  I then had to drill a hole through the support into the cavity of the hardtop.  I removed the port side external speaker and was able to fish the wire over to that spot.  I then went on top of the hardtop, and measured where to drill the hole for the wire.  I wanted to make sure that it was covered by the solar panel, but close enough to the speaker hole that I could run the wire through the new hole.  Everything worked fine, and the wire was on top of the hardtop.  I then soldered on the solar panel connectors directly to the wire.  I used heat shrink tape to complete the install. 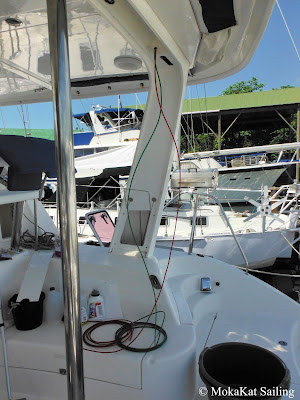 I had to drill a hole in the base of the hardtop starboard support. 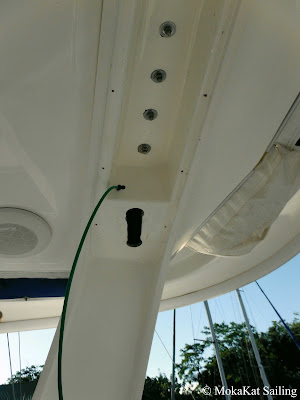 I also drilled a hole in the support into the cavity of the overhead hardtop support. 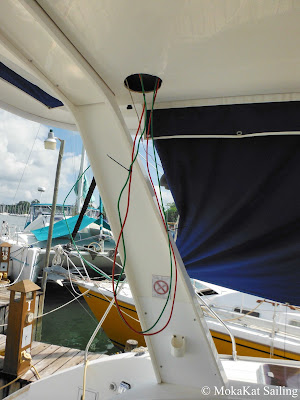 I removed the speaker and pulled the wires down.  I then pushed them through the hole in the hardtop. 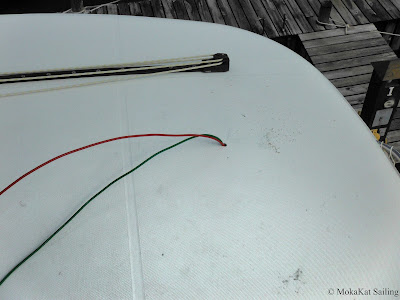 Wires coming up through the new hole in the hardtop. 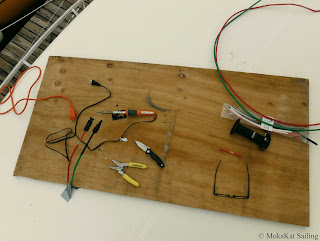 I borrowed a piece of plywood to solder the connections on. 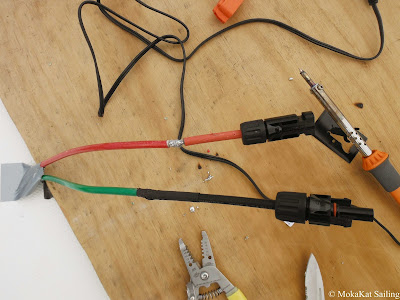 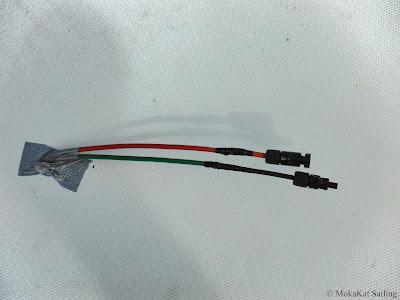 Connections all ready!  The duct tape was temporary and now is replaced and sealed by 5200
5).  Wire the solar panel cables to the solar charger.  I looked for a large enough fuse to install in line, but everything I found had a small cable attached.  I figured that this would be a bottleneck or issue, so I found a two way disconnect switch at a local store.  At least this way I could turn off the solar panels from the controller if needed.  I could also bridge multiple inputs together on this switch.  I connected the cables to the switch on both sides and cable tied it all down to make it look good!  At least the under the sink part of this install was complete!!! 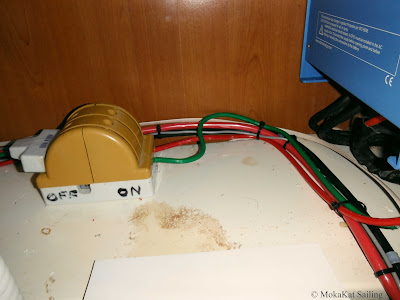 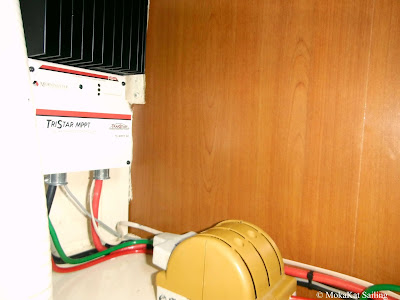 The disconnect is connected to the controller 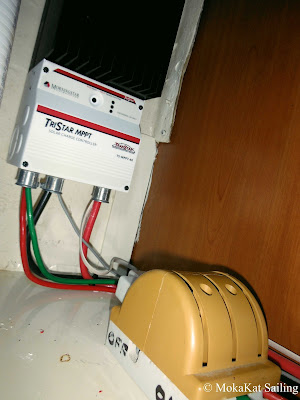 Final install under the sink!  Glad that is done!
6).  Install the brackets and panel.  I had a local guy, Carlos, to make the aluminum brackets that I used for the panels.  He did an excellent job of rounding the edges and pre-drilling the holes.  I positioned the solar panel where it was going to go, and drilled the holes for each bracket.  I used 3M 5200 to seal and glue the brackets down.  It was easy, and the panel was in place.  I allowed this to dry for a day before I fully tightened it down.  I then had to drill and install the panel on the brackets using stainless steel bolts. 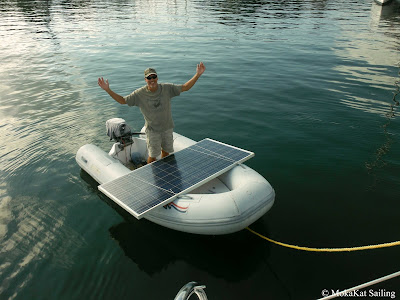 Delivery by dinghy from the local bus station!  How big was that fish? 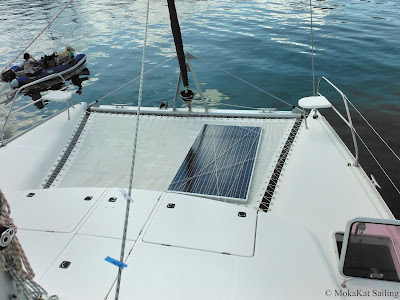 This is where the panel rested, waiting for the brackets to be built.
It was showing 39 volts in full sun! 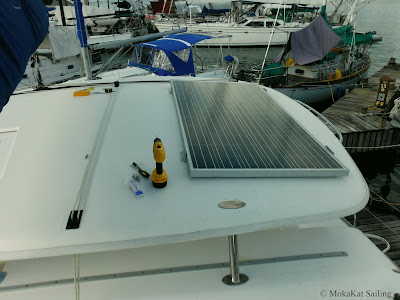 Brackets installed and panel live and working.  The panel still needs to be bolted on the brackets at this point. 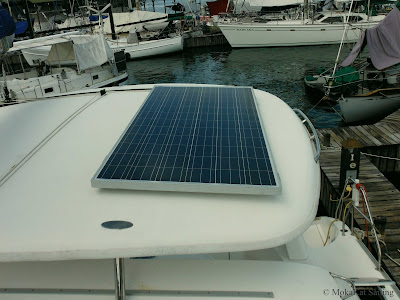 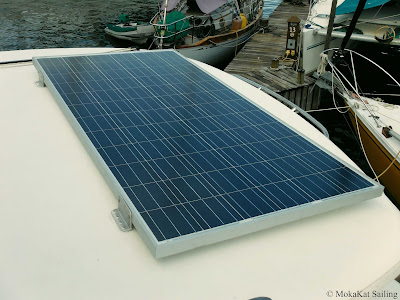