This morning started early after a night of fighting no-see-um most of the night.  The wind died, and the no-see-um came out in force.  When I woke up, there must have been a million little no-see-ums waiting for me to open the sliders!  Instantly I was swarmed with the tiny blood suckers!  I grabbed the can of bug spray, Deep Woods OFF, and it barely kept them at bay.  I woke mom up, and said, let's get out of here!!!!  We fought these little brutes all day!  At last, after a couple of mosquito coils lit, the little terrors were gone!

I started the engines, and we pulled up the anchor and headed for Colson Cay.  The ocean was a sheet of glass, so we motored the whole way.  With the water so clear and like glass, it was amazing that you could see starfish and stingrays on the bottom.  It was also made me nervous to be in such shallow water. Mom sat on the front and kept a lookout for coral heads. 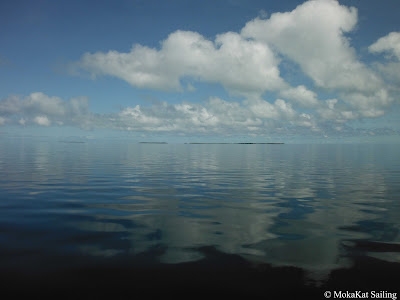 Just before we hit deep water of the channel, the fishing pole started singing!  Fish on!  I put the engine in neutral, and went back to fight the fish.  It took 10 minutes or so, mainly because the fish took out so much line.  At the end we landed a nice 8 or 10 pound snapper!  Fish tonight, and snapper is one of my favorite! 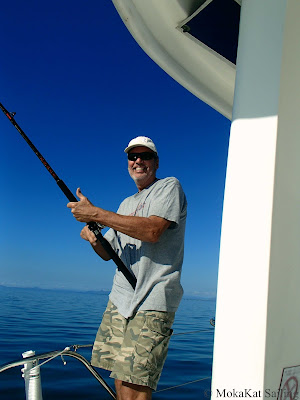 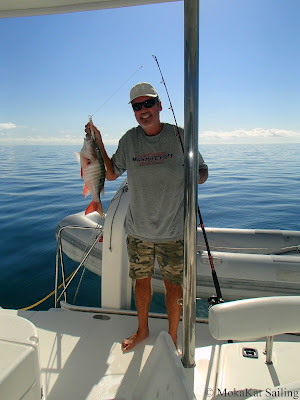 As we were arriving at Colson Cay, fishing pole again started singing!  This time it was a nice size barracuda.  I fought it to the boat and pulled it in.  Mom took a couple of pictures, but our freezer was full, so we let it go.  No barracuda head soup for mom!  Actually, after the last episode of barracuda head stew, we both said no more, as we smelled barracuda head for several days after!!!
We anchored in the pass of Colson Cay, and was joined later by a local fishing boat.  Mom cooked half of the snapper with some fried potatoes, and it was great!  Snapper is still my favorite fish so far! 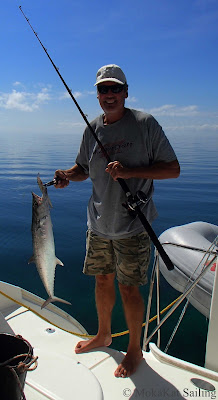 Lucky Barracuda, as we let him go free!
Posted by Unknown at 2:50 PM