Today the forecast that the Moorings gave was 5 to 5 knots from the north!  Once I heard this great forecast, we decided to head to Twin Cays, about 20 NM north east. The first challenge was to pull up the two anchors.  I still haven't found a good way to get the secondary anchor up without it being a circus.  Well, welcome to the circus!  Our plan was to pull up the primary with the windlass, and at the same time pull up the slack in the rode for the secondary.  Taking up the secondary rode was important, so that it didn't get hug in the rudders or worse, in a prop.  I guess I wasn't too clear to mom about the secondary rode, as when we finally got the primary up, the secondary rode was way behind the boat.  There were a few words exchanged, and my mom is funny, as when she is in a stressful situation, you voice gets louder and louder.  As she is telling me about the secondary rode, I finally asked he to stop yelling so loud, as I was just a few feet away.  It was kind of funny, but I guess she didn't think so at the moment.  We tried using the windlass and the main winch, but it was hard as the wind was blowing 13 knots, and I had to stay at the helm to keep the boat pointed into the wind.  Finally we were able to brake free the anchor, and I manually pulled it up.  We were finally free!  No pictures were taken to record this circus!

Unfortunately, we had to back track south to get out of Pelican Cays.  I am sure that there was a place to cut west, but the chart plotter is all messed up in this area, and I didn't trust it.  So we went back about 4 miles and around the last part of Pelican Cay and then out into the channel.

The wind was already blowing in the high teens, so much for the nice forecast today.  I put a double reef in the main and put out most of the jib.  I figured that I could pull the jib in more if needed.  We tacked a few times trying to get west enough to head north.  At one point, I was concerned that we didn't have enough daylight to get to Twin Cays, and no one sails at night here!  I almost headed back to Placencia Harbor, but then decided that I didn't want to lose the 20 NM miles north that we had already sailed.  We finally got the right angle, and headed north east toward the Blue Range Cay, where we had to cut through to get to Twin Cays.  Now the wind was constantly blowing 20 knots, and gusting to 25! So much for the nice weather, plus there was no sun for the past 5 days, and our solar panels are provided nothing in the way of power!   With the reefs in the main, we controlled our speed, running between 5 and 7 knots.  The waves continued to grow over 2 to 3 meters, so we had a nice rocking and rolling ride. 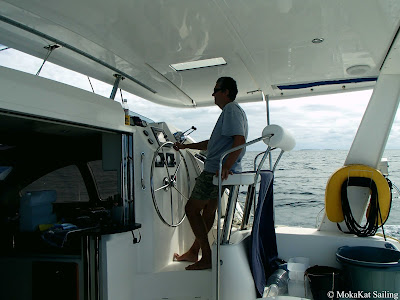 I was focused in the high winds!
Just as the wind hit a high gust, the fishing reel started to sing!!!  Yipeeeee!!!!  We had a fish on!!!!  I ran over and grabbed the pole, but then realized that the boat was still traveling around 7 knots!  I put the boat into a 'hove to', which was the first time that I did it on this boat.  It actually worked great, slowing down the boat and the rocking!  I then fought the fish for about 10 minutes.  It turned out to be a nice Jack of some sorts, and about 10 pounds!  It was our largest fish so far!  Fish dinner tonight! 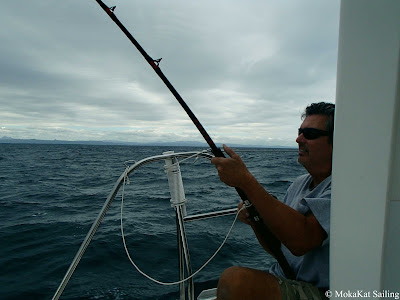 Fighting the fish in rough seas! 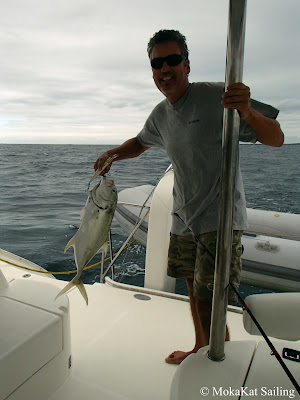 A nice Jack, not my favorite, but still good to eat!

As were approached the Blue Range Cays, in 20 plus knots of wind, the starboard jib sheet shredded, with the cover separating from the inner strands.  This caused the jib to start flapping and I didn't want it to break all of way, which could damage the jib.  I turned into the wind and I had to cut the halyard, as the outer covering would not go through the turnbuckles.  I guess it is time for new halyards for the jib!
We then motor sailed with the main, until we arrived at the cut through at the Blue Range Cays. We then dropped the main, and motored through the pass and following the way points in our cruising guide, directly to Twin Cays.

It was so nice to enter calm protected water!  We anchored in 6 feet of water in the middle of the cays.  I was really tired, as this was one of our more challenging sailing days. It was around 6 hours from anchor up to anchor down, but the heavy winds and waves can wear you out! 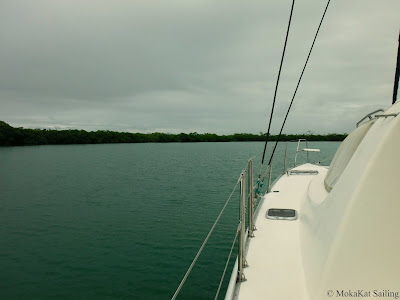 I filleted the fish, and mom cooked half of it for dinner.  The fish was OK, but a little dark for me.  We still enjoyed it and we were both stuffed!

The rangers came over shortly after we arrived and collected $20BZ for use of the park.  It was well worth the money to have a quiet anchorage.
There are supposed to be crocks in Twin Cays, so we were not advised to swim.  They didn't have to warn us twice, as we stayed on the boat with our toes out of the water!

Mom spent almost an hour off the back of the boat watching all of the sea life flocking to her light!  It was like an aquarium, with shrimp, crabs, small minnows, larger fish, and some sort of eels swimming around.  The crabs were the most interesting, as they swam all around eating the plankton and fighting off the larger fish that were trying to eat them.  She said that it looked like the video game Galaxy, with the crab one of the larger space ships and the minnows the smaller ones.  What can I say to that.....