Another early morning, as we had a long way to go today.  We wanted to make it to Water Cay, on the north side of the Belize City Ship Channel.  We had anchor up at 7:00, and we needed to head out of the pass east out of Colson Cay.  The cruising guide showed a path angling south out of the pass, as there was a shallow reef directly in front of the pass.  I guess I didn't hug the cay close enough, and soon we were in very shallow water.  I stopped and looked for a way around, so I did a 180 and headed back closer to the cay.  The fishermen were also pointing at several options.  It is always nice to embarrass myself in front of the locals!  Luckily, we found the deeper water and motored out toward the barrier reef and deeper water. 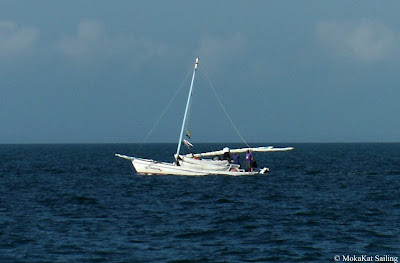 Since there was a nice south wind blowing, we raised the sails and headed north parallel to the barrier reef.  We had to dodge several shallow spots, and at one point it we had to do several jibes in a row to snake through the reefs.  We were feeling really confident about how we were dodging reefs when we entered an area on the east side of Middle Long Cay.  There was a long reef running parallel to the Cay, but ahead it angled in front of us and there was no way to get around it!  I then noticed that closer to the Cay, there was a narrow channel of dark water, and a local fishing boat was coming up that way.  So I did a 180, while sailing, catching a beam reach, bumping our speed up to 6 knots, just what I need is speed to angle through the little pass into the deeper water.  I finally angled across the shoal low pass into the deeper water, just before the fishing boat came by.  Later we discovered that this maneuver caused our favorite lure to get hung in some coral, cutting the line.  Maybe the barracuda was getting his revenge!  This was some of our most challenging sailing, as we had to dodge many shallow spots and reefs.
We passed Rendezvous Caye, where many tourist from the cruise lines go for the day to get off of the ship.  It was packed with people when we went by.  No thank you! 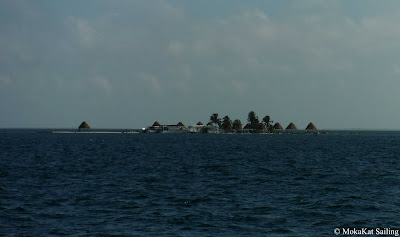 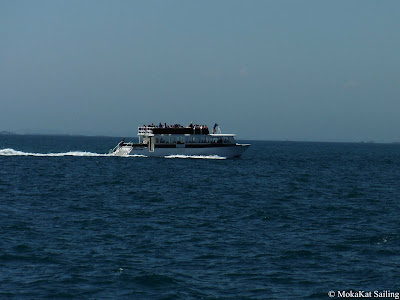 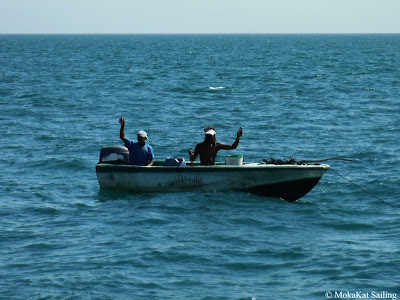 Local fishermen waving as we sailed by 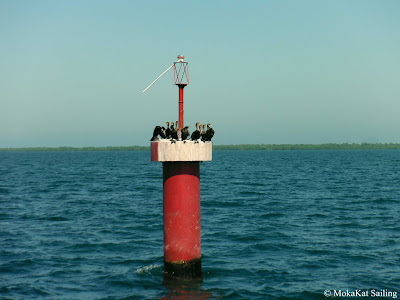 We motored on the north side of Water Cay and dropped the anchor in 8 feet of water.
We were both really tired, and it was only 1:00 pm!  I snorkeled a little and relaxed some.  There was four cruise ships sitting at anchor a couple of miles away.  It was such a contrast to see these mountainous ships, like small cities, as we sit on our small sailboat.  I am thankful that we are on our boat.  As we ate another great meal, we watched each cruise ship head past us and out to sea.  Nothing bad about cruise ships, but the experience that we are getting is much closer to nature and the local life.  We are both enjoying the solitude that we get out in the cays.  Tonight we can see the lights of Belize City, and as we are ready for Internet, people, and restaurants, the light pollution is interfering with our star gazing! 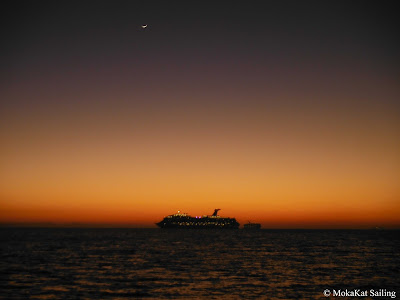 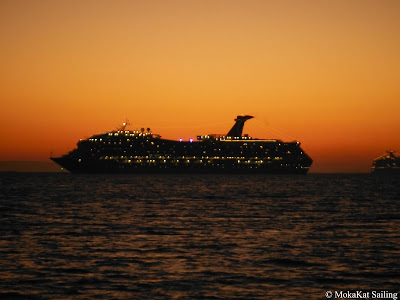