Today we wanted to make it to Cay Caulker, so we had a long way to go. The wind was already kicking up from the east, so this should be perfect in heading north.  There were a couple of new cruise ships that arrived overnight, replacing the ones that left.  One had a large eyes and lips, and mom said that it was the ship that she wanted to be on, too funny! 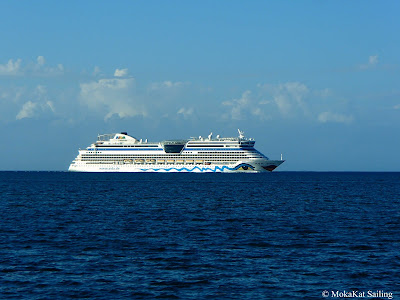 We pulled up the anchor and headed across the bay toward a cut between Swallow Cay and Mapps Cay.  The wind was blowing at 15 knots and we were on a broad reach.  We were traveling at 6 to 8 knots and were flying!  It was the best sailing ever!  Unfortunately, we quickly arrived at the pass, so I dropped the sails and motored through.  As it turned out, we could have made it through on sails, as the pass was deep enough, but we had so much speed under sail, I was worried that if I needed to back out of a shallow spot, I would rather be under motor. 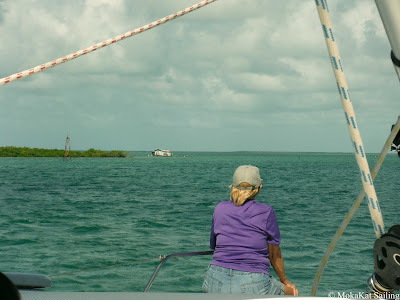 Mom on the bow as we motored through Porto Stuck.

After making it through this pass so easily, we raised the jib, and sailed between 5 and 6 knots.  The next pass was Porto Stuck, so I know that I would drop the sails again.  I don't want to sail through the famous shallow cut.  Once we arrived at Porto Stuck, I dropped the jib, and started the engines.  We followed the guide book, and the way points, and easily motored through the pass.  We once again raised the jib, and sailing in 6 to 8 feet of water, yikes, we headed toward Cay Chapel and Cay Caulker.  The water was an amazing blue green.  I guess because of the shallowness and the sand.  You could also see where they drug barges, leaving white sand instead of sea grass.  They were like stripes in the bottom.

Cay Chapel was just beautiful, with coconut trees lining the shoreline.  It is now a private island, and you need dinner reservations to anchor.  We may have to research that more for our Christmas dinner. 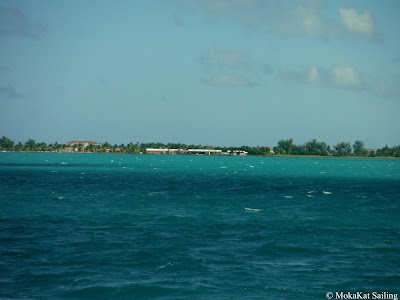 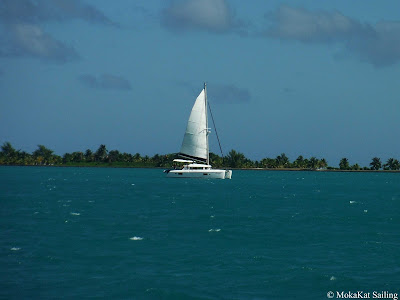 We passed Cay Chapel, and quickly headed to Cay Caulker, our final destination.  We pulled into the half moon bay, just west of the island and motored until we found some white sand in 6 feet of water to drop our anchor.  We had arrived!!!  We took the dinghy into a small dock, and for the first time in almost two weeks, walked on land. 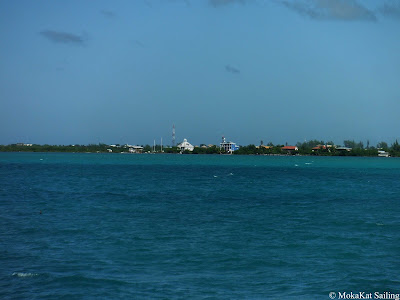 Yes, Cay Caulker, and our home for the next week!

We walked up and down the Main Street to get the lay of the town.  It was larger than I thought and many tourist from different countries were everywhere.  This is different than the remoteness that we experienced out on the reefs.  It was also nice to get Internet and catch up on things back home.  We ate at a restaurant close to our dinghy, as I was worried about it.  We had tied and locked it by a dive shop and hopefully we didn't block someone.  When I checked on it, there was a dive boat tied where I left the dinghy, and they moved our dinghy forward about 15 feet to get their boat tied up.  Luckily, our security cable is long and they were able to move it.

We ate our first Belize Conch Fritters and had some fish tacos.  They were both excellent, and mom really liked the conch.  I think that we are going to like Cay Caulker!  Happy Sailing!
Posted by Unknown at 3:29 PM