It's 9:00 pm on Thanksgiving Day and the wind is still blowing 12 to 20 knots out there!  It has been a good day, although it had some difficult moments.  We got up early and headed out of the Placencia Lagoon, where we had spent the night as the northern front came through.  Today was forecasted with NW winds at 10 to 20 knots, and the next couple days after that.  We decided that we would sail down to Pelican Cay, as it had protection from the North.  The other good thing was our chart plotter already had waypoints entered for the entrance and path through the coral to the anchorage.  So, we headed out!

All I can say is that we had two different experiences.  The first was a beautiful sail in 12 to 15 knots for about two hours.  We had a single reef in our main, but we were still sailing along at 5 to 7 knots.  The waves were not too large, and we were having a great time!

About half way to Pelican Cay, the wind decided to pick it up a notch, kicking up to 20 knots and then gusting to 25.  We jumped up in speed pushing 8 knots, and the waves grew in size.  Every once in an while, one would crash over the front, spraying everything with water!  We were still in control, and we headed into the wind and put a reef in the jib, and then we put in another one!  We finally got the speed back down to about 6 knots, bursting to 7, but we felt in better control.  We were running close hauled, so we were facing the brunt of the waves head on. 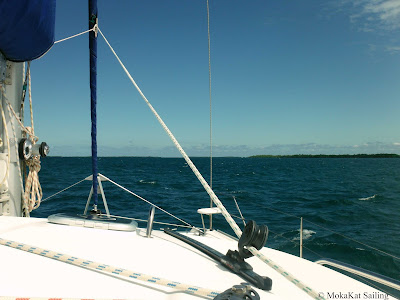 Waves starting to pick up!

I was concern when we arrived at Pelican Cay, as the water went from 75 feet deep to 7 in just a few yards.  As soon as we crossed back not deeper water, we lowered the sails and motored the rest if the way.  It was almost 3 miles of zigging through the waypoints that finally brought us to the anchorage.  We finally decided on a spot and dropped the anchor.  We still had some wind and waves hitting us, as the anchorage was exposed on the west side.  Most of the wind was coming north, so we felt like this was a good spot. 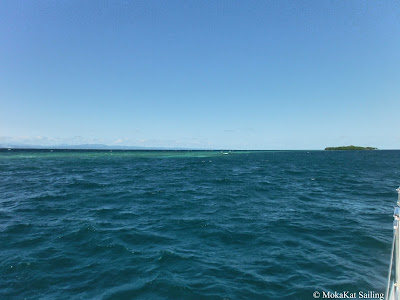 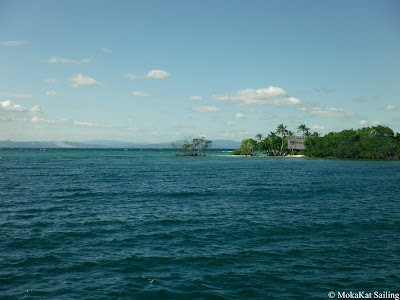 Our anchorage for the next few days

After getting the boat put away, we both ate lunch and I watched part of a movie, while mom crashed.  We were both worn out, as the sail was a little difficult.  The good thing was that we handled the conditions in a good way, keeping control and not over powering the boat.  It was good practice to have some heavier winds to deal with.

Just to be safe, I put out our secondary anchor at a 45 degree from our primary, directly west.  I had to use the dinghy to take it our and drop it.  Since the water here is 60 feet, our 200 feet of chain is not quite 5 or 7 to 1, so putting out our secondary gave us some more security.

Mom cooked the most amazing stuffed pork chops and backed apples!  We split a bottle of Melbec and had a great dinner!  The sunset was amazing, and we were both glad to be out in the cays again! 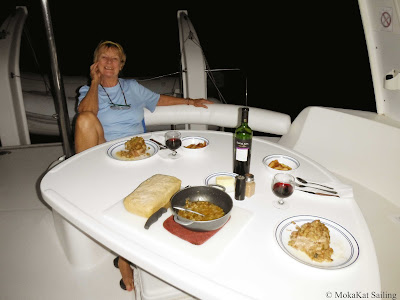 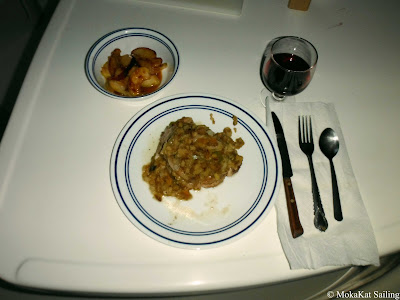 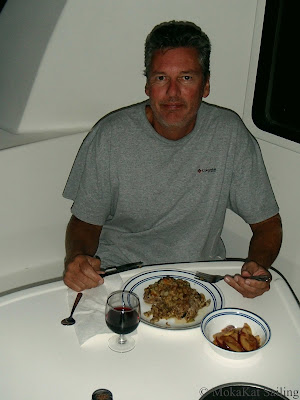 We may stay a couple of days at the Pelican Cays as we need to head north, and both of us have no desire to motor into 20 knot winds.  We will wait until the weather forecast looks better before we head out.  Plus. This gives us time to explore the area! 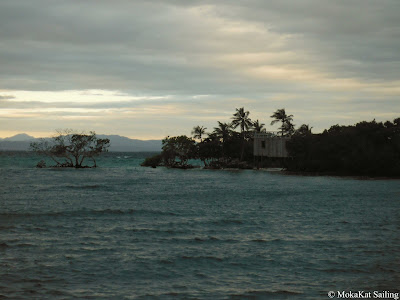 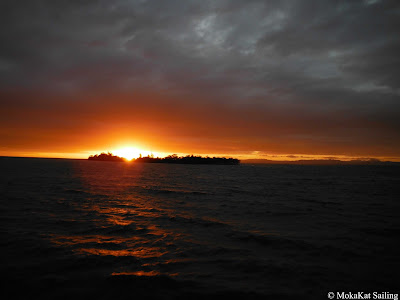