Hatchet Caye, Belize - Day 2 - This is not your easy sailing training area!

It's 7:00 pm and I am exhausted!!!  Today was one of our hardest sailing days for several reasons.

First, the day started out with several squalls hitting right when we were trying to raise the sails.  We had motored north out of the Placencia Harbor to get a better angle to head to Hatchet Cay.  The first squall we saw before we started raising the sails, so we just motored a little further north until it was past.  I the raised the main and just about had it up, when a larger storm came from nowhere and headed right for us.  I quickly dropped the main, and grabbed my rain suit.  This time the winds hit 25 knots and it poured hard for about 20 minutes.  OK, lets try again, but again another storm moved in, with little wind but some rain.  Finally we were able to raise the main, after a couple issues getting it up, we finally were sailing!

Secondly, the way to get to Hatchet Cay is by Viper Rocks, Moho Cay, and many coral heads.  Since Hatchet Cay was directly into the wind we were having to tack a LOT, to gain any ground.  It is one thing to follow the recommend route in a straight line, but when you are tacking, you are all over the place dodging coral heads, Viper Rocks, and smaller cays on all sides.  There was one place it was almost impossible to sail through, as it was tight on all sides, and there was a fishing boat right in the middle of our route.  I finally started the motors, reeled in the jib, leaving the main up, and motored through this area!  Wow, I sure picked a hard place to learn to cruise!  After that the sailing was easier and the water deeper.  Back in the tight spot, I hit some areas that were only 7 feet deep, and you could see the bottom and coral clearly.  It is hard to relax sailing when there are so many obstacles to avoid.  My mom, with her off the wall comments, said 'this is such a good place to learn to cruise!'.  I looked at her with one of my looks and explained that I don't think that we could have picked a more difficult place to learn. She finally agreed after I explained why I thought so.  She went back to her spot and fell back asleep. So much for my lookout! 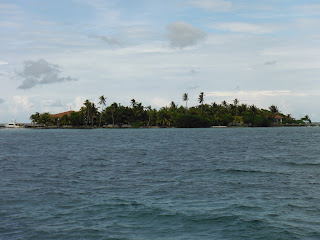 Thirdly, coming into a new anchorage is always stressful for me.  I studied the charts, but when you are coming in, it all looks different.  As we were coming into Hatchet Cay, a saw many colored balls on the left of the island.  There was supposed to be mooring balls on the side I was approaching, but I couldn't see them.  I did see a small sailboat anchored in the shallow water and a large power boat straight ahead.  So, I slowly motored straight ahead, while mom was in the front looking for coral heads and shallow water.  On the small sailboat was a group of fishermen watching to see what we were doing.  As we entered the reef, I looked to the side and I could see coral heads just feet below the surface!  Mom was on the front doing some sort of gyrations with her hands, but she didn't say anything.  I then realized that I was making a huge mistake, and I quickly back out the way we came!  I asked mom why she didn't say anything, and she said that she was pointing at all of the coral heads as fast as she could!  OK, next time mom, yell something!!!!  We were both tired and stressed, but finally saw the mooring balls over on the right.  It was nice to finally get securely on a mooring ball and shut down the engines.  It took almost 6 hours to make it here!  I had to sit on the front of the boat and take a little break, as I was just exhausted.  I guess it's part of the learning curve, but we came close to hitting the reefs today. 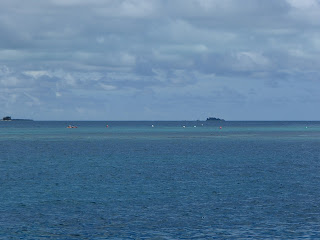 Balls were all over!  Which ones are the mooring balls? 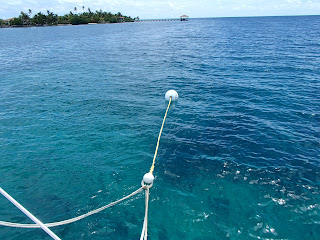 Safely on a mooring ball! $15 per night!
I had to dinghy in to pay the $15 for the use of the morning ball.  There is a very nice resort on the island and a 4 star restaurant.  When I was returning to the boat, I stopped at the fishing boat and asked if they would sell me some fish.  They were super nice and sold me 4 whole snapper and 4 lobster tails for $10US.  What a deal, so I took the fish back to the boat, filleted them, and we had some great fish for dinner!  We will have lobster another night!  There must have been 10 guys on the small sailboat, less than 20 feet.  They have small little dories that they use to fish, paddling by hand, and spearing fish as they go.  It looks like everyone sleeps out on the deck of the boat at night, not a very easy job. 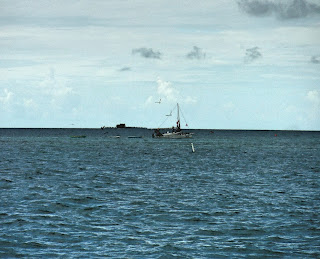 Thank you for the fish and lobster!

I crashed early after an excellent fish dinner, thanks to our fishing friends!
Posted by Unknown at 6:10 PM