Wow, last night was really stormy!  The wind hit 35 knots, and I was glad that we were on a mooring ball.  I had also dropped our main anchor straight down, so if the mooring ball was to break free, we would at least have our anchor down.  The mooring balls here at Hatchet Caye where the best that we have seen.  They are only about a year old and very solid.  After watching the wind hit over 30 knots, and we were solid in the mooring ball, I tried to sleep.  The only problem with Hatchet Caye is that the mooring balls are on both sides of the island, and they are not protected.  This means, that although the moorings are solid, the boat was getting hit by waves all night long.  It was a long night of big winds and waves. 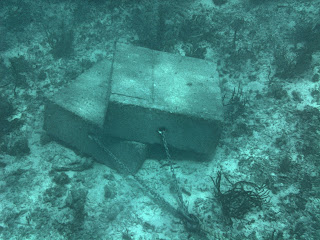 Huge concrete blocks to hold the mooring balls!  They were only about a year old! 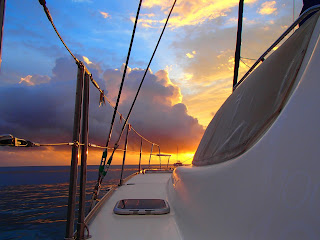 Beautiful Sunrise after Storm Night!
We survived the night just fine, but with some loss of sleep.  Today was snorkel day, so I was excited to head out.  I swam over to the reef from the boat and enjoyed seeing many fish and found some sand dollars.  I didn't see any lobsters, but many nice fish.  I saw my first lionfish, which was very huge, about 18 inches.  It was down about 12 feet, hiding in a hole.  It was very beautiful, but because the are not a native fish, they hated here in Belize.  They are eating all of the beautiful reef fish, and there is an open season on killing them.  Unfortunately, I didn't have a spear gun, so I could only take some pictures. 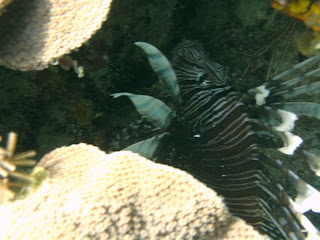 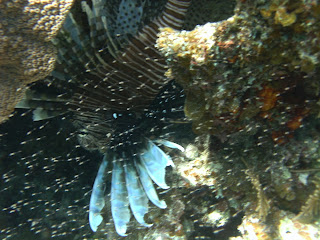 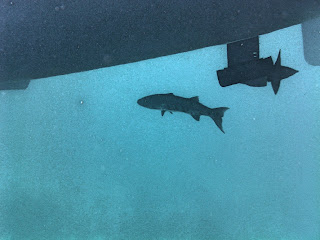 This guy was waiting for us to return to the boat!
After lunch I wanted to take the dinghy over to a sand bar and rock pile that was on the north east side of the island.  Mom didn't want to go, so I went alone.  I was on the hunt for lobster!  When I arrived over at the spot, I put on my snorkel gear and jumped into  the water to set the anchor.  The anchor that we have is a little jet ski foldup anchor and doesn't hold very well.  So usually I will dive down and find some dead coral to secure it to.
While I was swimming back to the boat, without my lobster stick or camera, a large nurse shark cruised by and settled down on the sand a few meters away.  First of all, I was totally shocked, not expecting to see a shark, as maybe it was attracted to the boat motor.  I swam back to the boat, looking around nervously, and pulled out my underwater camera.  I always wondered how I would feel the first time that I saw a shark while snorkeling.  At this point, I was confident that I would swim over to the resting shark and take as many pictures as I could without any concerns or issues.  So I headed over to the shark.  I pulled up my camera to start taking pictures, and then the shark came off the bottom and did a 180 directly for me!  I took one quick picture, and realized that the shark was getting really close, so I kicked it away with my fin!  So much for docile nurse sharks!  I then followed it, taking a couple pictures, but then it turned again coming straight for me!  I again kicked at it and it swam away.  I took a short video as it was swimming away, and I decided that I was done playing with it, as maybe it would get mad or something.  After reflection, I believe that it was just curious in me and was not trying to attack or anything.  Still, to see a 5 foot shark swimming directly toward you is a little unnerving.  I feel better after this experience, so next time maybe I will be more relaxed, maybe! 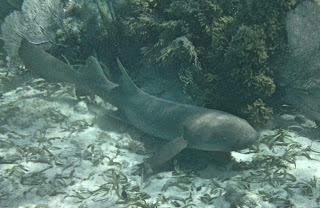 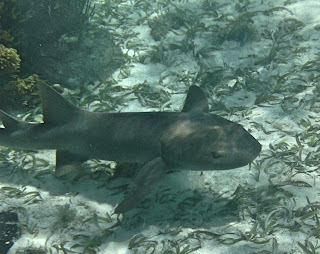 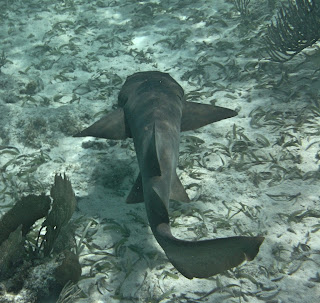 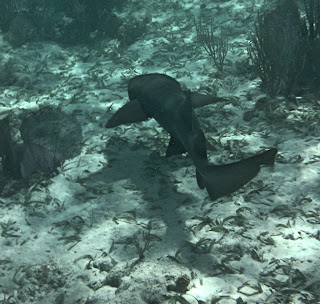 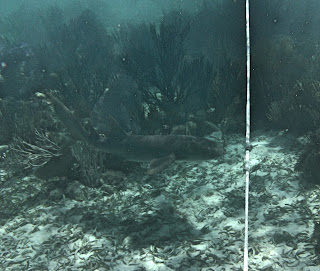 The rest of the snorkel was excellent with some nice pictures.  The water was shallow with white sand, so the colors came out better. 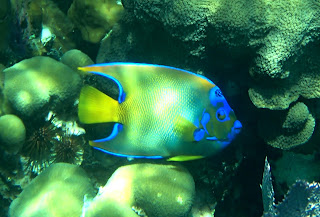 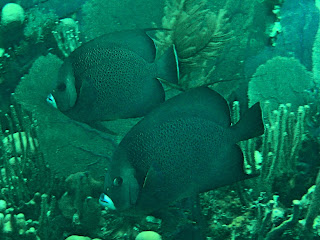 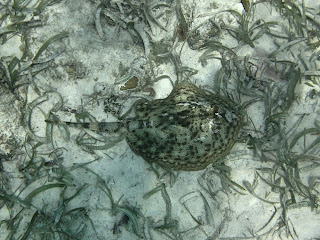 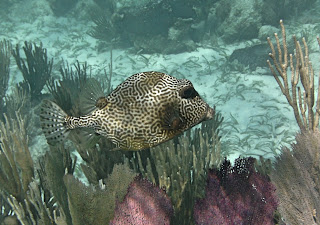 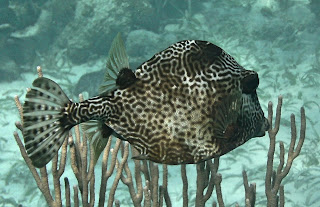 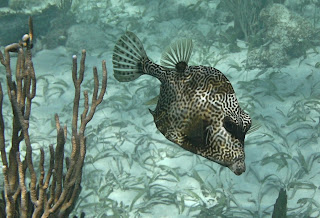 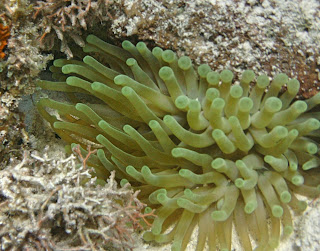 The other Mooring Charter boat with Allan as captain, picked up an anchor ball in front of us.  We actually moved to the other side of the island to see if this side was more protected than the side that we were on.  Allan asked if my mom and I wanted to eat dinner at the Hatchet Caye resort with the group, so of course we couldn't say no!  We had a great time talking with Allan and his wife Philicity.  They are from Africa, and both of they have great experience sailing and living on a boat.  We really enjoyed talking with them!  After dinner, we walked to a lighted pier and saw spotted devil rays swimming around.  It was really cool! 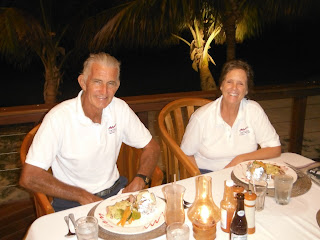 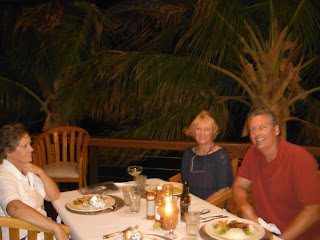 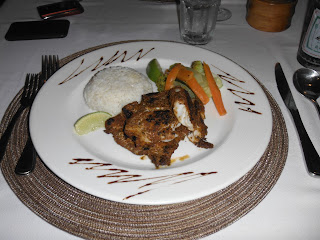 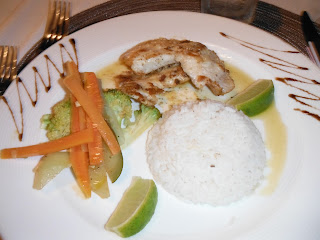 
I really didn't plan on saying anything about my mom's dinghy etiquette, but I can't hold my tongue any  longer.  I really think that she is doing these things to get attention, but who knows.  Tonight, for the third time since we have been on our adventure, she did face first, trip and dive over the front and to the bottom of the dingy!  I scored it at least a '9' out of '10'.  This dive, one of her best so far, had her feet sticking up in the air, and her face down in excellent form.  Of course there is no video or pictures to show off her skills, so you will have to take my word on it.  At least most of the dinghy is soft rubber, so no bones where broken.  I expected the group of Chileans to say something, but maybe they were focusing in not taking the plunge themselves, but no one said anything.  I just quietly backed up the dinghy, muttering something about my mom's balance issues, and we headed back to the boat.  Another bruise and another day in paradise.  Cruising with your mom can be interesting, to say the least!