The activity at the Moorings Marina had dwindled down to nothing, as most of the staff took a month vacation during September.  We still had our security guards and dogs, Termite, and Wiley with us.  As I travel back, my mom will help out feeding the cats, which are permanent fixtures there.  All of the boats have been cleaned up and readied for a month of inactivity.  Also, since this is usually the highest hurricane activity month, the boats have the main sails wrapped up, and the jibs are taken down.  In the event of a hurricane, the local staff is called back in, and the boats are moved into the mangroves for safety.  Our boat will also be taken to a safe spot in the event of a strong storm. 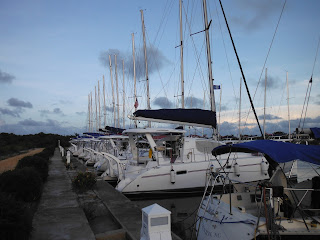 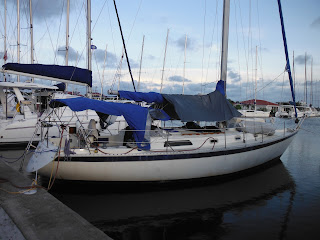 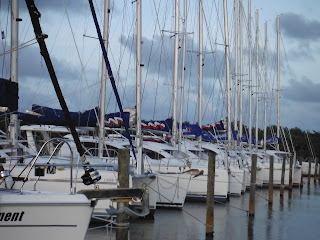 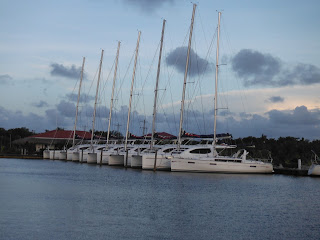 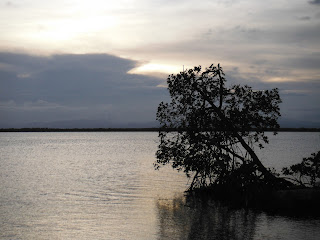 Last sunset before I head back home for two weeks. 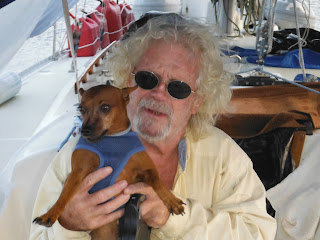 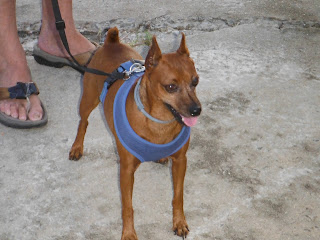 Wiley on his evening walk!
﻿
My travel back home was an all day affair!  Sam's Wife (our favorite taxi driver), picked me up at 6:30 to head to the airport.  Five minutes later I was there!  It is only two miles down the road, and the only traffic we saw was a couple of bicycles.  I chose Maya Island Air to travel from Placencia to Belize City, where I pick up my American Airline flight.  It is a 45 minute flight, but we stop in Dangriga for additional passengers.  The flight is nice, as you step on the plane, strap in, and it goes without any waiting.  It is almost like a bus, as people come and go on each stop. 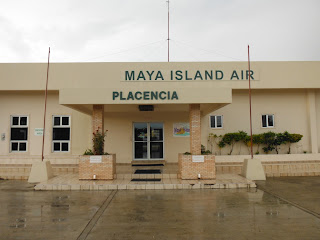 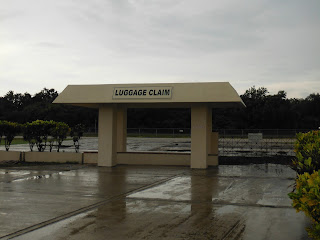 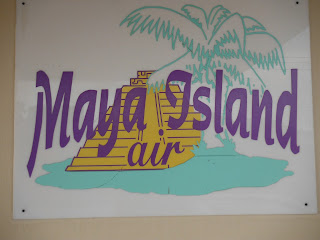 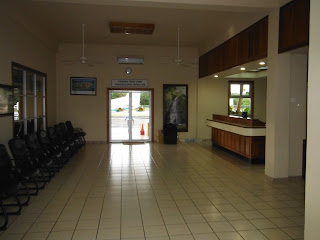 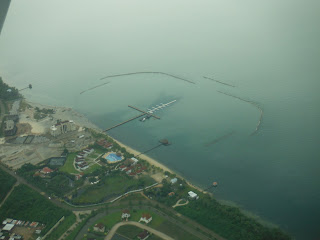 View of a new Resort and Marina 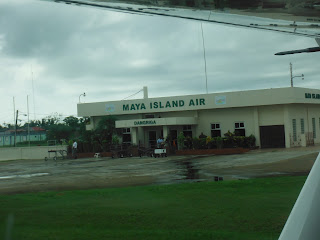 A stop in Dangriga 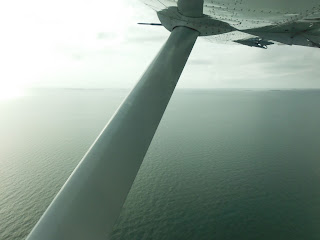 Distant view of some of the Cays that we went to. 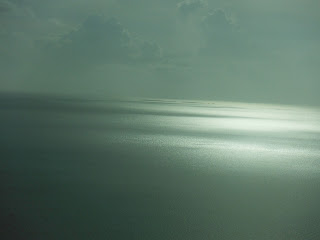 Cays in the distant and calm seas. 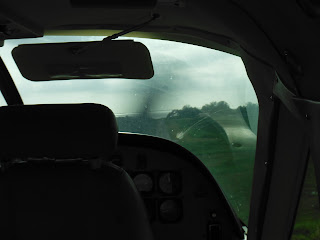 Yes, that is the runway ahead (looking past the bug splatter!)
﻿
I arrived in Belize City about 3 hours before my flight to Miami.  Luckily there was a small restaurant that served coffee and a good breakfast.  Soon, I was heading back to the USA.

Of all of the airports in the US that I despise the most, the Miami Airport is the highest on my list.  Going through immigrations is usually not an issue for most returning citizens.  I know the frustrations of this for foreigners, as my wife, from Colombia, usually gets special treatment.  Maybe it was just the line that I choose, but the guy that was checking us was taking forever for each person.  The guy finally ended his shift, and a new guy replaced him, checking the 5 people in front of me in a few minutes, and I went through in a matter of minutes.  I am not sure what happened with this guy, but the hour delay in immigrations was now pushing me to be late to catch my connecting flight to Dallas.  After immigrations, I quickly went through customs and on to security.  When I arrived at the security, the line was full and out into the corridor.  I then walked down to the next security gate, which was at the other terminal, and quickly made it through security.  Now this is where I really don't like the Miami airport.  I couldn't find any map showing me where I was and no terminals showing me where my next flight was!  I finally saw a tram, and hopped on it thinking it would take me somewhere, but it was a dead end, and I wasted 10 minutes going to the next group of gates and back to my original stop.  I finally asked a guard where Terminal D was, and he pointed me down a corridor and finally saw some signs for Terminal D.  After a 1/4 mile hike, I finally had to take another tram to the Terminal, and then walk from Gate 25 to Gate 6 for my flight.  Well, when I arrived, the flight had just closed the doors.  Luckily, there was another flight in one hour, so they moved me to that flight and I had time to finally eat some dinner.  Did I mention that I really hate the Miami Airport!

I finally arrived at Dallas, and made my original flight to North West Arkansas (XNA).  My suitcase also managed to make it too, which was amazing, as I had changed flights three times.  I was happy to be back in North West Arkansas, with my wife was waiting for me!  Back in the land of Diet Dr. Pepper, hamburgers, and Walmart!
Posted by Unknown at 10:41 AM