Sometimes it is amazing that everything falls into place!  I had ordered a WirieAP (marine wifi antenna), and when I didn't receive the confirmation email on the shipping after a week, I opened a ticket with them.  They were very responsive, making sure that it would get it just before my leaving on the 21st.  It made it with a day to spare!  I also received some other packages the day before I left too!
One of my largest worries was that I had ordered a new Yamaha outboard for our dinghy, and it was supposed to be in Belize City before I returned.  We couldn't leave Belize without our outboard, so this could affect our plans for exiting the country before the end of the month!  We also wanted to take Phil and Julie, our friends that were house sitting here in Belize, to Guatemala with us.  They have to be in Costa Rica by October 5th, so we do have a timetable to watch!  I had sent a couple of emails to the Belize City Yamaha dealer, but after several days, they haven't responded.  On Wednesday before I was going to leave, I finally received an email confirming the delivery!  Perfect timing!
I called the company with the outboard, and found out that they were going to be closed on Saturday, as it is Independence Day in Belize.  The owner, Peter, agreed to take the outboard home with him, and they gave me his address and phone number.  My mom called him and let him know when I was going to arrive in Belize City, and he would be available!
I headed to the XNA airport with my two check bags, both weighing in at 54 pounds, and a 40 pound carry on, and my backpack, packed to the max!  I also had many things in my carry on, a Dewalt drill, 30 foot security cable, and some tools  They told me that I can't take the drill in my carry on, something about unscrewing bulkheads or something, plus I needed to lighten my bags by about 3 pounds each.  I spread out all of my suitcases in the area just outside of the check in area, and tried to redistribute the weight, and keep the prohibited things out of my carry on!  At last we found the right combination, and we were allowed to check in! 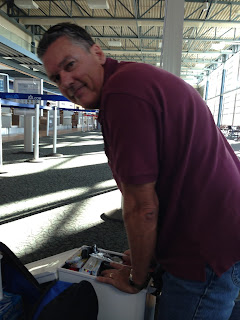 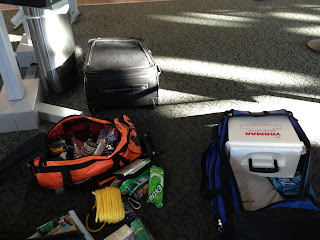 You can tell I am heading to a boat, with Yanmar parts kit and lines!
The orange bad is my carry on, with a two wheeler strapped underneath!
As I went through the security checkpoint, Maria Paula waited just outside to see if I made it through!  If they denied something, she could take it home, instead of throwing it away!  Of course, when I sent my orange bag through the scanner, all of the warning lights came on, and I got escorted over to the side to investigate.  I had to open the bag, and they did bomb swabs on all of my Dewalt batteries, but at the end, they allowed everything to go through!   Maria Paula was totally amazed that I made it through without losing something!
My flights to Belize City were perfect, arriving in Belize City around 3:20.  My next challenge was to get through Immigration and Customs without paying too much in taxes.  I know that I had to claim the Yanmar parts, the WirieAP, and the Dewalt drill, but I hoped that all of the other stuff would be considered personal items, and hopefully they would be excluded.
Immigration was fine, even though I had a one way ticket.  I just explained that I was catching a private boat, and that I was heading down to Guatemala in a week or so.  Of course Customs was a different story!  I am sure that they have heard every excuse not to pay taxes, but I had to plead my case!  They guy was really good in my case, as we discussed every item, and whether they should charge me taxes or not.  Tourists are not supposed to pay taxes on fishing items, personal electronics and  tourist types of things.  One of the Yanmar parts kit case contained a small coffee maker, which surprised the Customs guy!  He laughed a little, expecting to see many motor parts, but instead was a $20 coffee maker!  At the end, I had to pay taxes of about $120 on the Yanmar parts, WirieAP, and the drill.  The fishing reel and large spear gun were excluded, as well as my iPad and my mom's new Apple Laptop.   I felt good about this, as it could have been much worse.
The next challenge was to pick up the motor and the case of oil, and then decide how I can get all of my stuff down to Placencia, about 150 miles south!  I had called ahead to Maya Island Air, and they agreed to take the outboard motor on the plane, if I would buy a seat for it!  So I ended up buying two seats, one for Mr. Dale McDaniel, and the other for Mr. Outboard Motor!  The flight was at 10:30 the next morning, out of the Municipal airport, inside Belize City, instead of the International Airport, which was further away from the outboard motor!
I had the airport porter talk to the taxi drivers, looking for one with a vehicle large enough for my outboard motor.  A guy named Louis, had a older Lincoln, that was larger.  There wasn't any vans around, so I went with Louis.  He drove me over to Peter's house, and we picked up the outboard.  It was still packed in a cardboard box, with the gas can included.  We had to stick it in the truck, with half of it sticking out, and then headed to find a hotel.  We were recommended the Paradise Hotel and Casino, so we headed over there.  When I checked in, I asked them where I could keep the outboard motor.  At the end, they put all of my suitcases on a large cart, and took it to my room.  It was the first time anyone had checked into the hotel with an outboard motor! 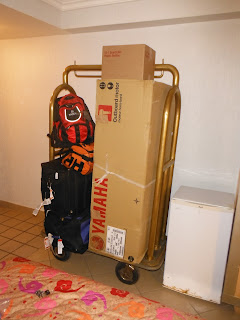 ﻿
Mr. Outboard Motor and my suitcases.
The next morning, I headed down to the lobby early, looking for a taxi that was large enough for the motor.  The only guy that was around had an old Lincoln, and from my previous experience, this should work.  It was only 5 minutes to the airport, so we loaded up the motor, sticking out of the trunk, and headed to the airport! 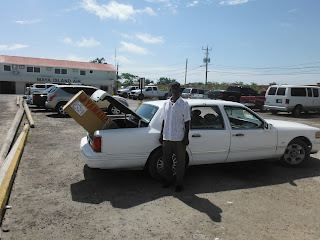 Taxi heading to the airport! 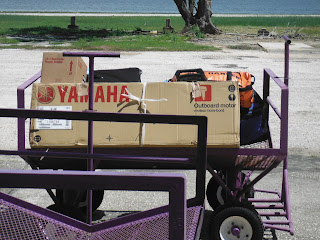 The whole cart was my stuff!
The flight from Belize City to Placencia was pleasant!  I met a guy at the airport, Paul, that received a Sam Walton Scholarship back in the mid 80s, and went to college in Harding University, in central Arkansas!  He now lives in Houston, and was traveling back for his brother's birthday!  It is crazy the people that you meet in far away places!  His brother picked him up at the airport in a truck, and they gave me a ride, with Mr. Outboard Motor and all of my stuff!  Thank you Paul!!!!  They left before I had a chance to take a photo of them helping me, so I was disappointed that the blog will not have a picture of these two guys helping me!
So, I made it back to the boat with Mr. Outboard Motor, and all of my stuff!  My wife still is amazed that I made it back with everything.  It was hot and humid, but I am glad to be back on the boat again!﻿
Posted by Unknown at 10:58 AM