Our original plan was to hang out at Colson Cay during the cold front that was heading our way.  I found some secret lobster holes last time that we were here, so I was looking forward to anchoring in the protected side, and enjoy catching and eating some lobster!  Again, our plan didn't work out so well! 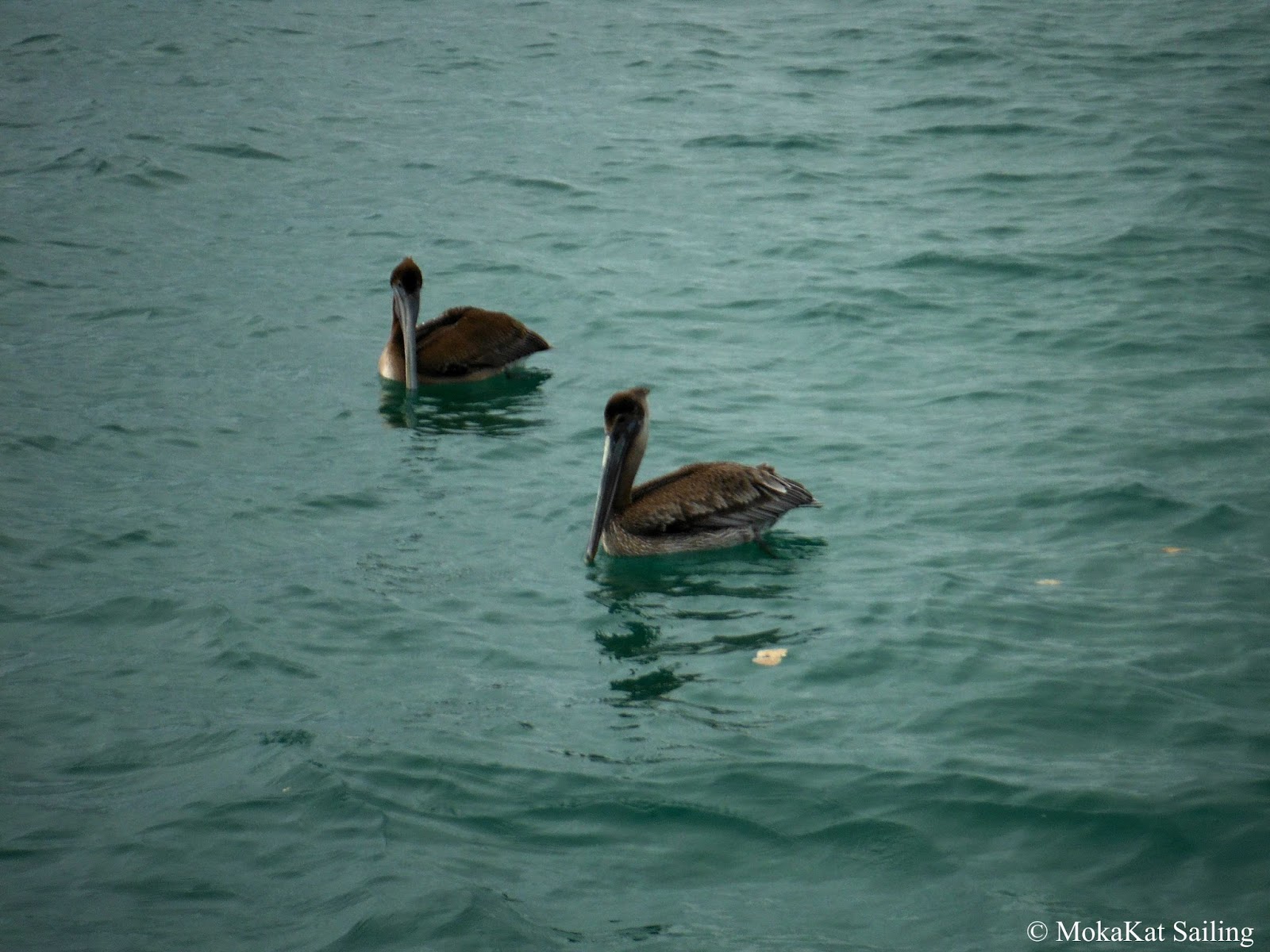 A couple of pelicans came by when we were anchored at Water Cay.
They didn't like the bread that we gave them!


So, after enjoying a nice anchorage at Water Cay, we headed south to one of my favorite cays, Colson Cay.  We had a nice sail under full sails, running around 5 knots most of the day.  We cut over to the east side just north of Alligator Cay.  I don't like going through the pass at Colson, if we can keep from it as the water is very shallow.  We also lost our track files, so the next time through the pass will be without any reference to our tracks.  The last time that we waited out some rough weather here, the wind was from the Northwest, so we thought that it would be a safe place to anchor.  This front was coming more north and possibly east, so I started to be concerned when we arrived and our anchorage looked a little rough.  At the time, I thought that it was just a wind shift, so we anchored on the south side, but exposed to the east.  We had a good night, and planned on spending the next day or two hunting for lobster! 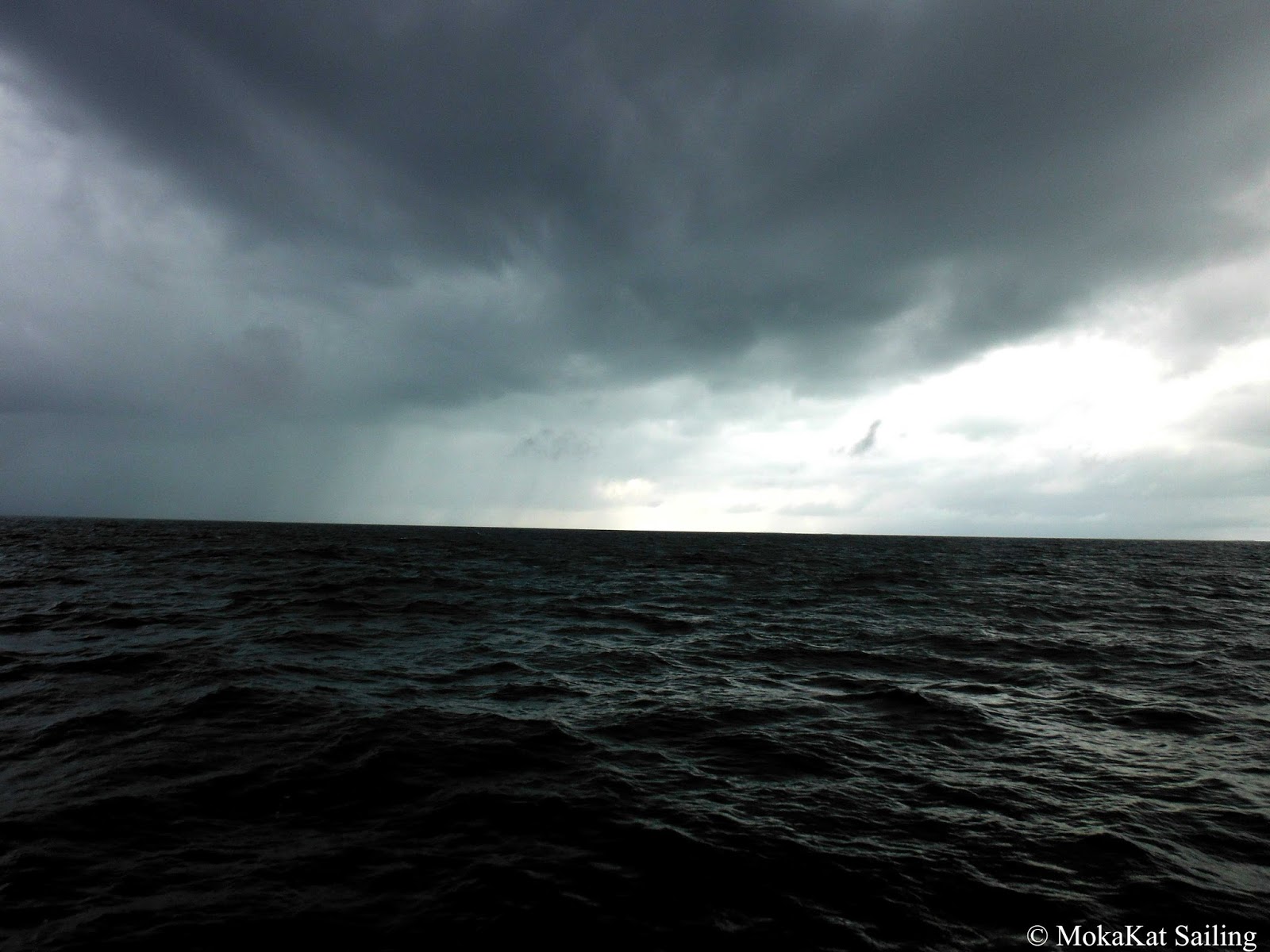 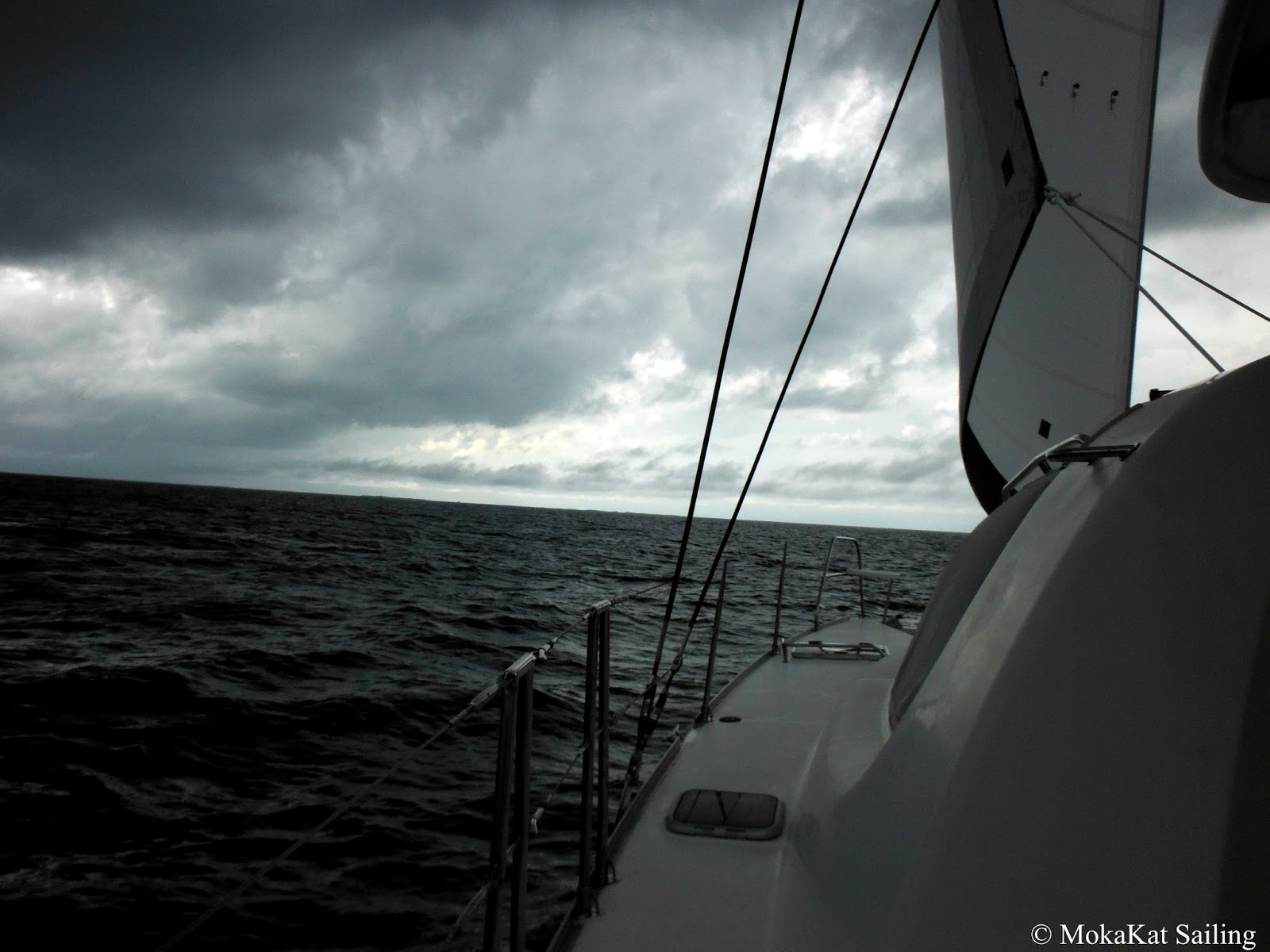 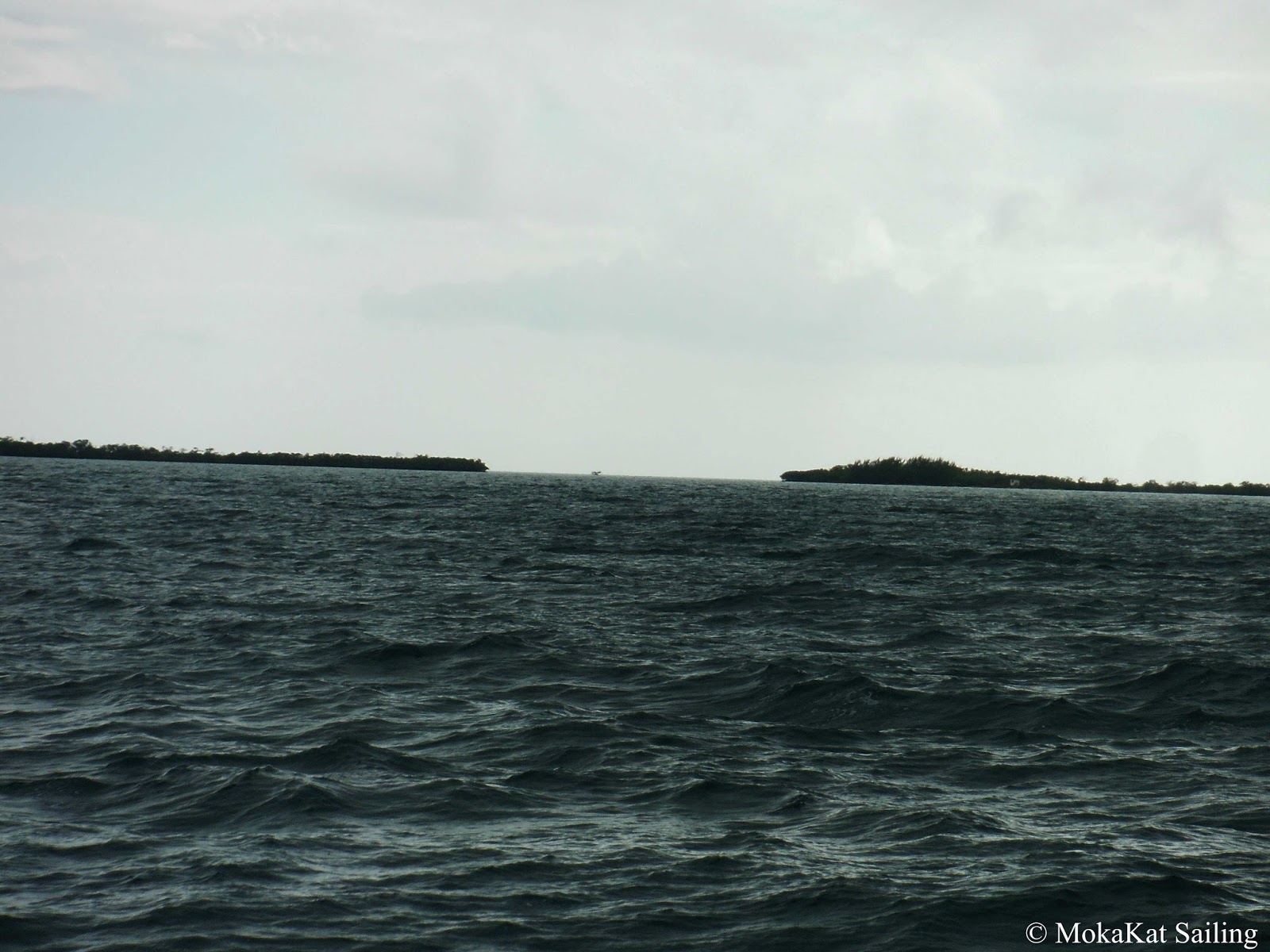 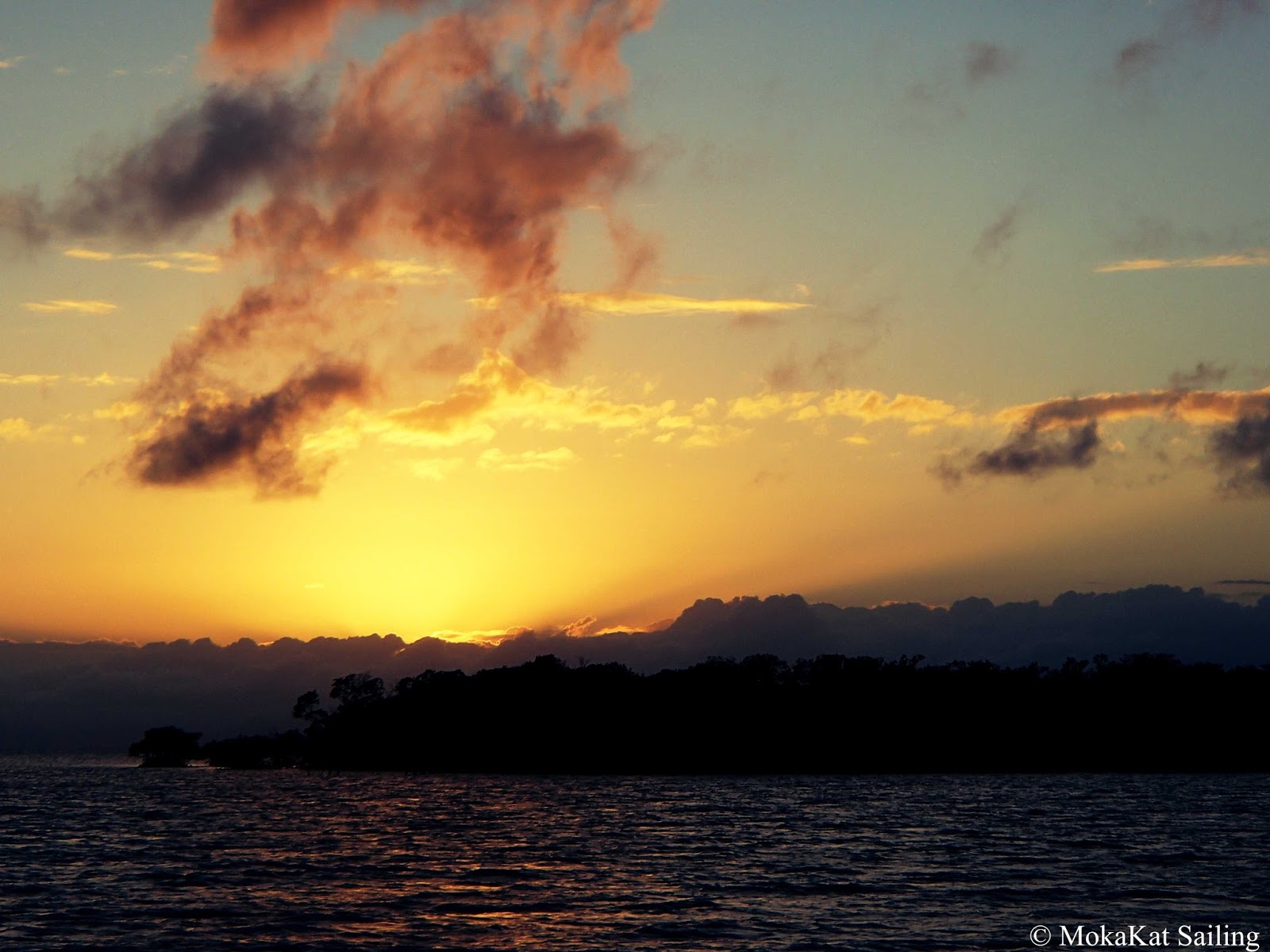 After a little rolly night, I woke up early and realized that the front that was going to hit today and will be more directly from the north and not north west.  Our anchorage would not be safe in these conditions.  So before I could make coffee, I pulled up the anchor and motored through the shallow pass into the deeper waters of the inner channel.  Mom woke up as I was running the windlass to bring up the anchor, and she helped spot our travel though the shallow pass.  Unfortunately, we also ran out of propane, and I hadn't made coffee yet.  Once under way, I swapped out the propane bottles, and made coffee.  What a lousy start to the day!  Besides, the wind was gusting over 20 knots, and the clouds were rolling in.

We decided to head over to the Fly Range, to Hutson Cay.  From the cruising guide, it looked protected from the north winds.  It was also close to the open channel, so we wouldn't have to dodge too many reefs in the rough water.  We sailed with just the jib, as we had plenty of wind, and we had been in a hurry to leave Colson Cays.  We sailed for about two hours, running 5 to 7 knots in 20 knots of wind.  We arrived in a couple hours and it looks like a beautiful anchorage with a small beautiful resort. 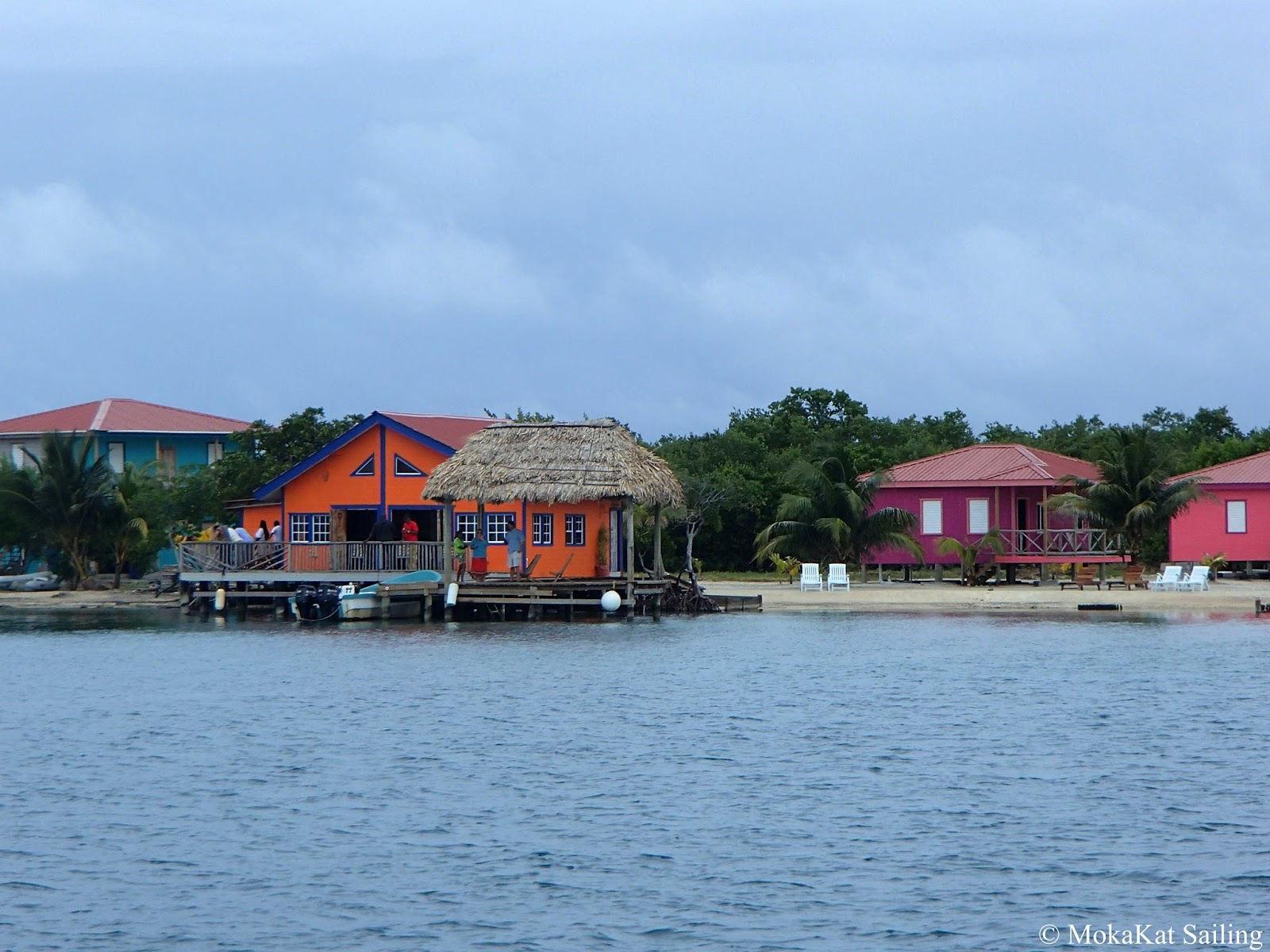 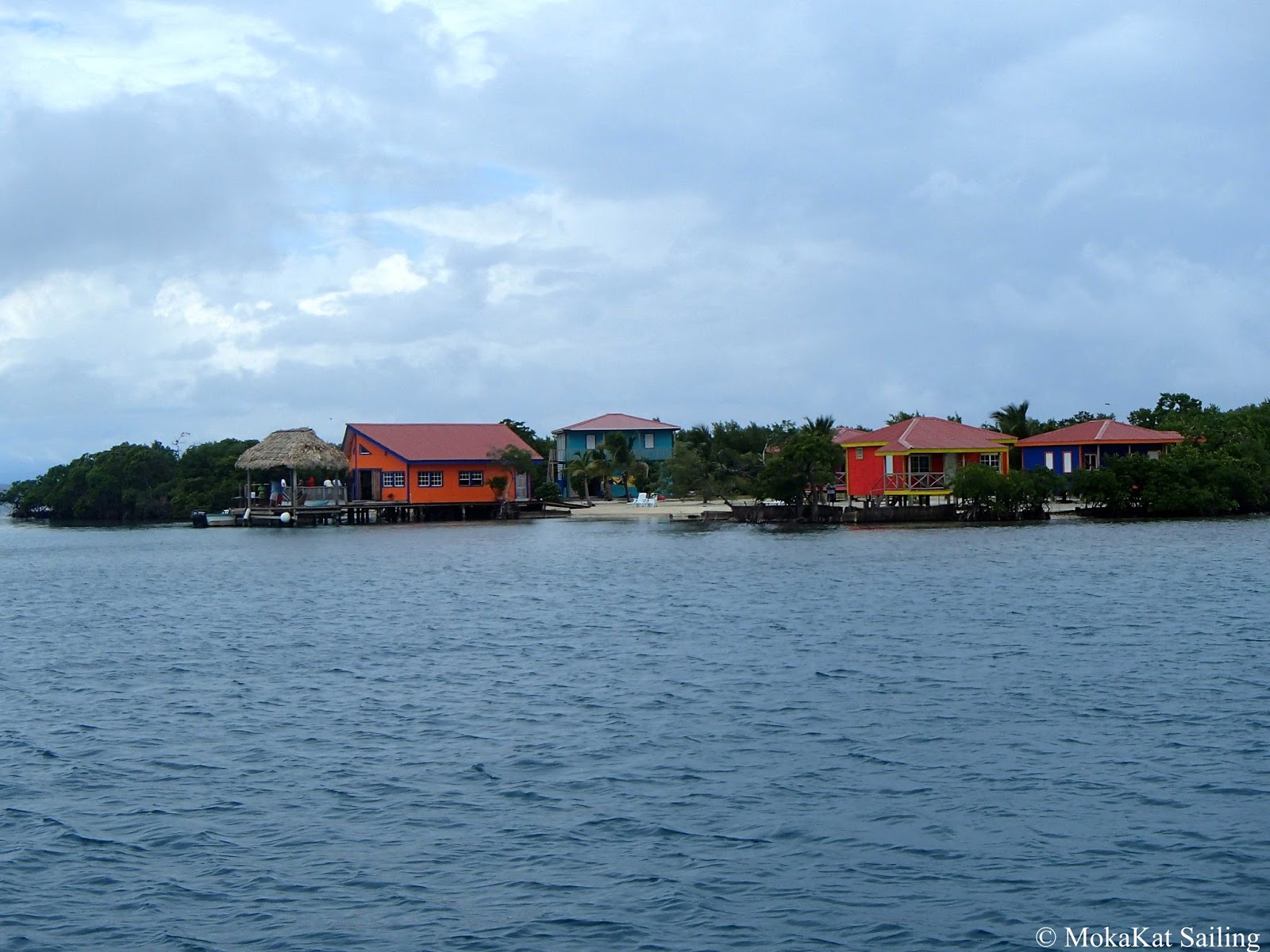 The anchorage was a little tight, with reefs on all sides.  We anchored, pointing north, with spectators watching from the resort.  Our first anchor set didn't hold, and I was able to drag the anchor, so we had to anchor again.  This time I went in really close to the reef to drop the anchor, and it finally set.  This was perfect!!!!  The water was calm, and we were happy to relax a little with such a nice resort and lots of reefs to explore!  We were planning on later checking out the resort to see if we could eat dinner there.

As we finally got settled from our sail and anchoring, the self proclaimed Mayer of The Fly Range, Harry, paddled over and introduced himself.  We invited him aboard and we talked for a while.  We ended up traded some rice, corn beef hash, and a beer for 5 small lobsters.  The lobsters were a little small, so we decided to have them for lunch.  Harry was an interesting guy to talk to, giving us his opinion about many things. 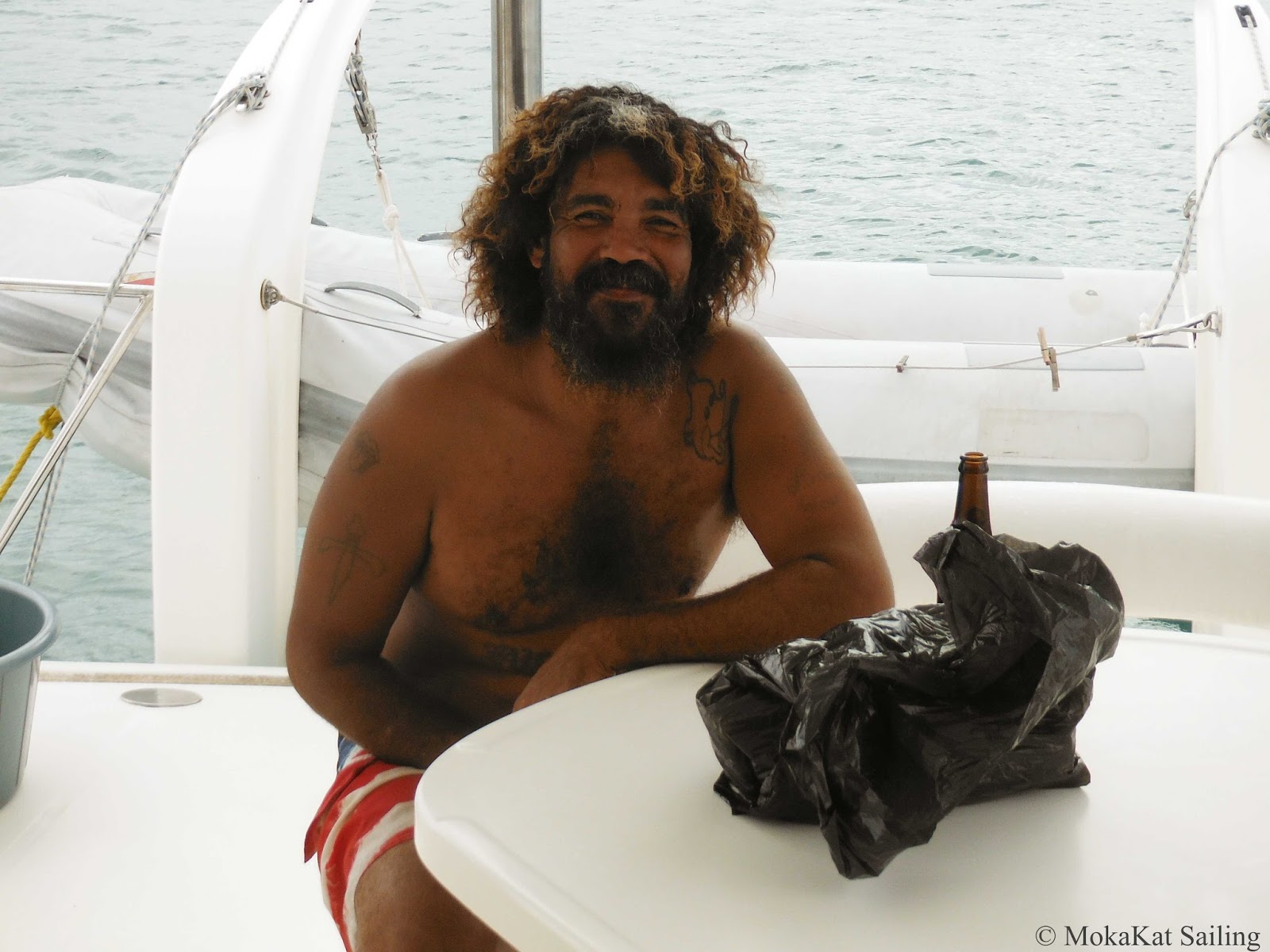 Harry, the Mayor of the Fly Range 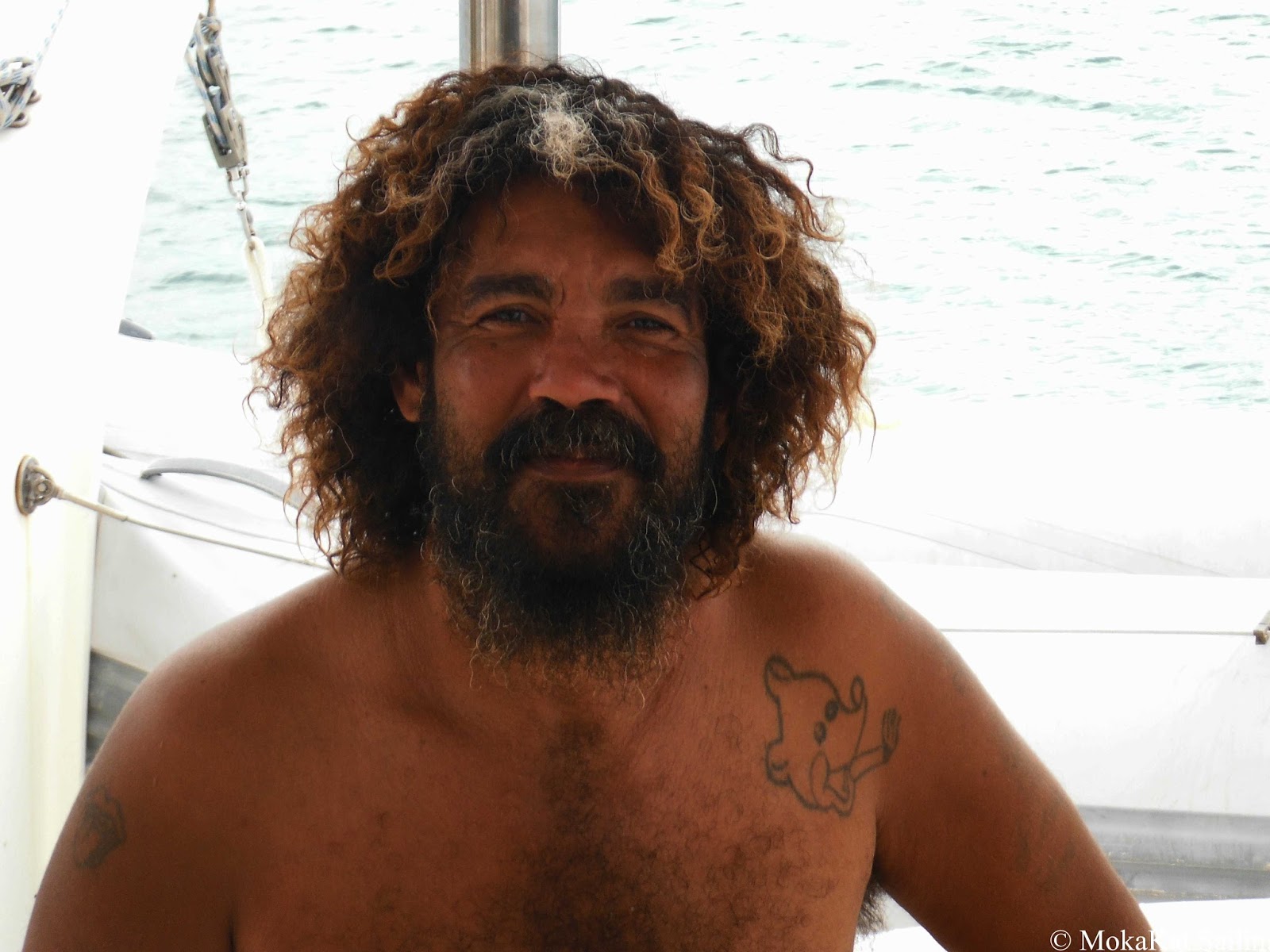 We then cooked the lobster and started to eat our lunch.  I just finished my first lobster, when I noticed that the wind had shifted to the east.  Our boat was only 20 feet from some shallow coral heads!  Yikes!!!  So much for a peaceful lunch!!!

We then realized that as hard as the wind was blowing, that it was going to really be difficult to get our anchor up, as I had to head sideways to the wind and thread between a shallow cut in the reefs!  I am sure that we put on a good show for the tourist at the resort, as I was running both engines hard to keep the boat off of the reefs, but move forward enough to pick up chain and our anchor.  At the last, the anchor broke free, allowing us to pull up the anchor in a little deeper water!  Just when we thought that we were going to relax all day!!!  What happened to the North winds????
After picking up our anchor, we motored around the Fly Range looking for a safe place to anchor.  There just wasn't any place that looked good enough to give it a try, with 20 knots of wind coming from the northeast.  We also didn't have much day left if we needed to head further south for a safer anchorage.  So we headed out into the deep water of the channel, and headed south, and reviewed the cruising guide for our next anchorage.

After reviewing all of our options, we decided to head over to the mainland, to Sittee Point. The waters were rough, as the wind was blowing 20 knots and greater.  We were on a nice broad reach, with only the jib up running about 5 to 6 knots.  I was concerned about arriving after dark to a new anchorage, so I ran the motors a little to gain a couple more knots whenever the wind slacked alittle. 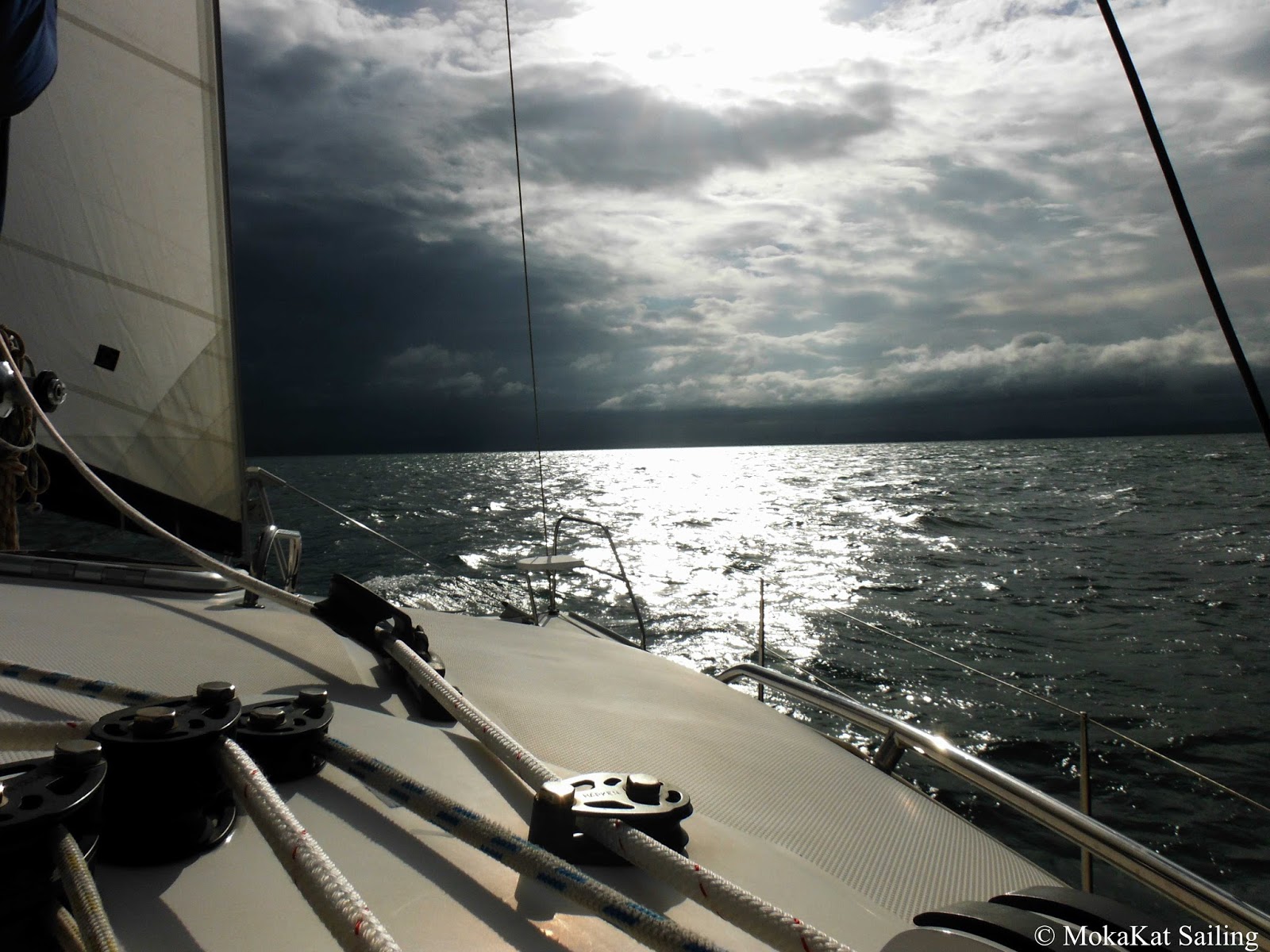 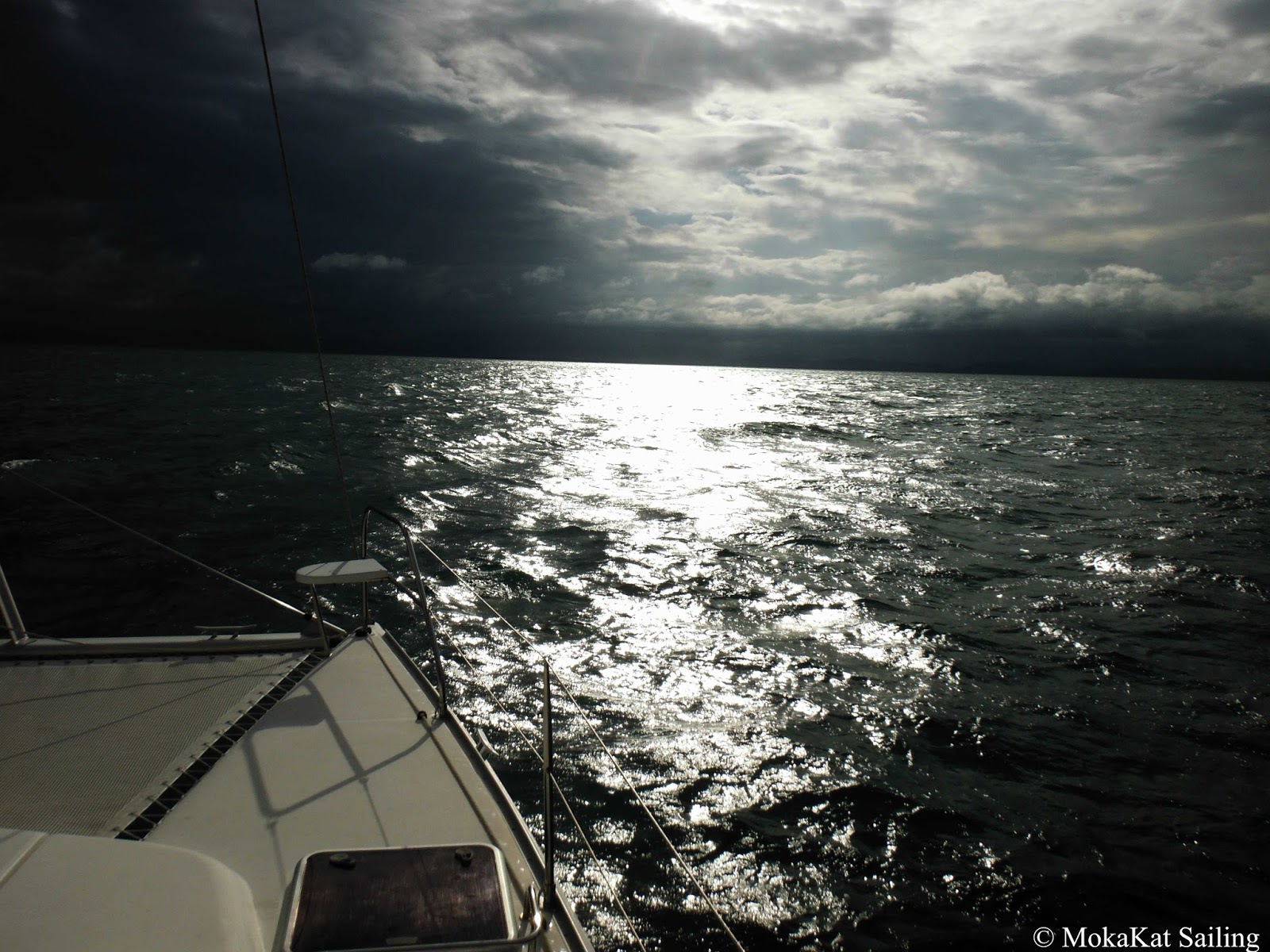 It then started to rain, topping off a tough day.  We arrived to Sittee Point just before dark, in the pouring rain.  We were happy to see calmer waters and no reefs!!!  After anchoring, it continued to rain for most of the night.  We were cold and wet, but happy we were finally anchored somewhere safe!  We were both disappointed that we were not able to explore the Fly Range.  We will remember it for the next time that we head north, hopefully in more settled weather!  This was a tough day sailing on MokaKat!
We stayed at Sittee Point for a couple of days, trying to improve the mood of the crew.  The disappointment of not staying at Hutson Cay hung heavy, plus the dreary weather.  We discussed the day and what we could have done to improve it, but at the end, we chalked it up to experience.  In my mind, the poor decision to anchor at Colson Cays was the catalyst for the bad day.  It didn't provide the protection from the Northeast high winds.  On the positive side, we made good decisions after that, but had to deal with shifting high winds, and rain. 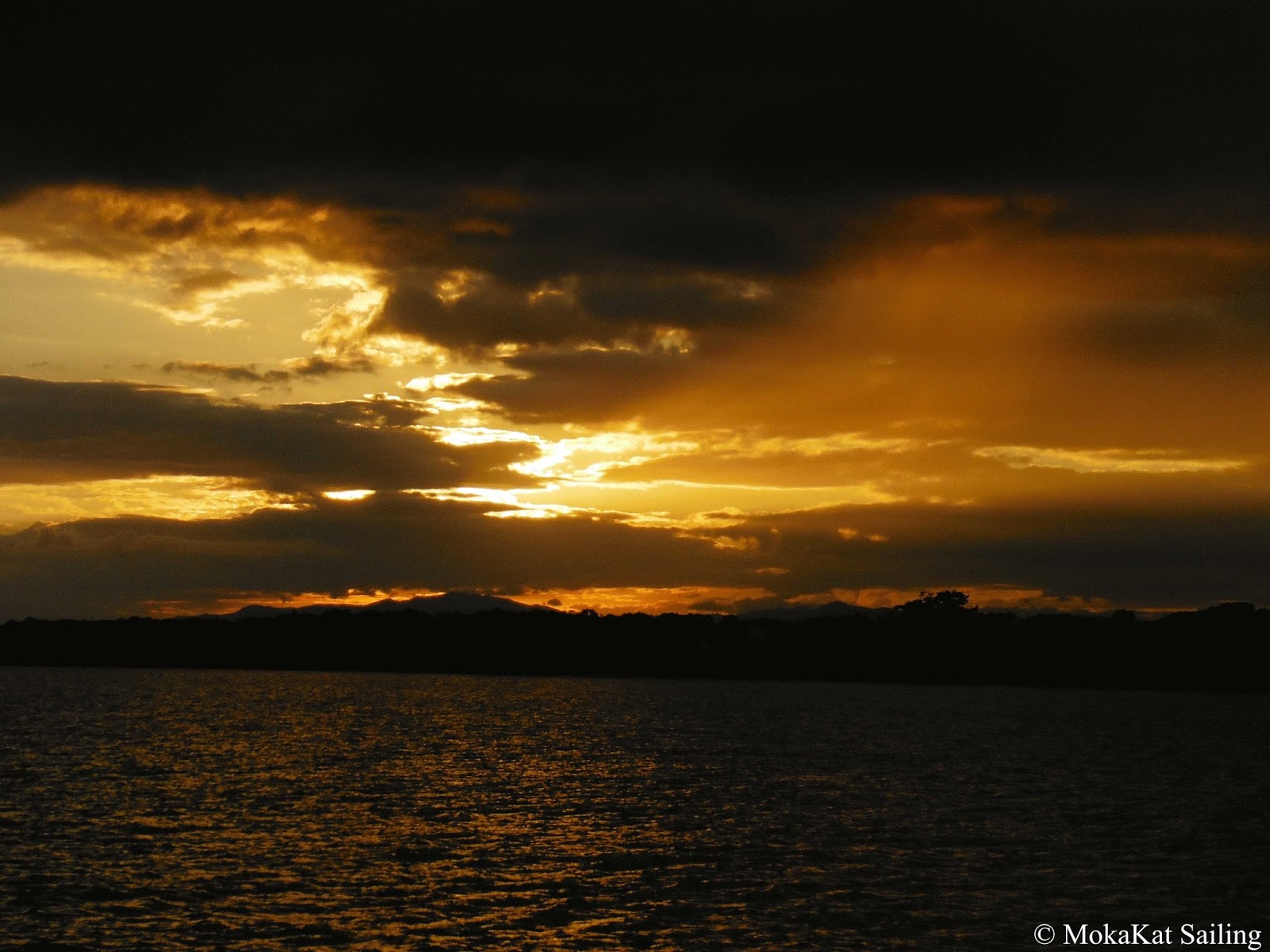 We ate fried snapper and enjoyed a beautiful sunset, knowing that there would be better days ahead!

Happy Sailing from MokaKat!
Posted by Unknown at 3:27 PM