We enjoyed visiting Cay Caulker and found places to get wash done and buy cases of cokes cheap!  We could also get our ice chest filled with ice for $1 at the fishing pier.  There was a great sports bar that had good food and fast Internet.  It seemed like all of the expats hung out there.  There was always a card game going and sports playing on the TVs.  Everything is very relaxed in the town, with sand streets and golf carts. 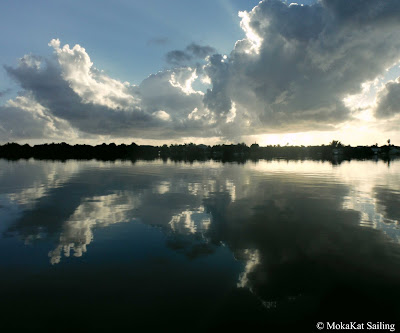 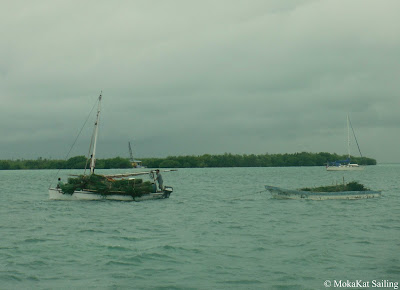 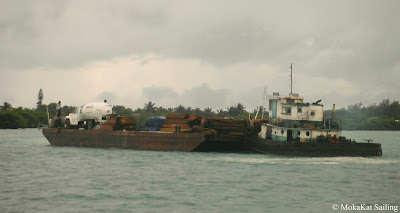 Everything is brought in by boat or barge!
After leaving Cay Caulker, we headed north to San Pedro, which is part of Ambergris Cay.  It was an easy 10 NM sail north, but the water was very shallow.  On the way north, we passed a sailboat that was heading south, named s/v WAHOO.  We have been in contact with them a couple of times and read their blog www.sailwahoo.blogspot.com.  We passed many beautiful resorts and residences on the south part of Ambergris Cay. 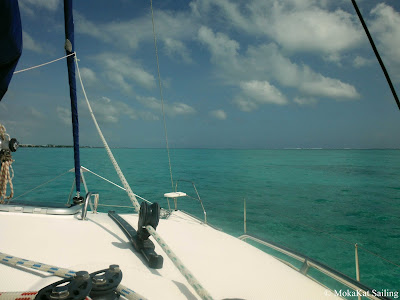 Heading to San Pedro in clear blue, but shallow water 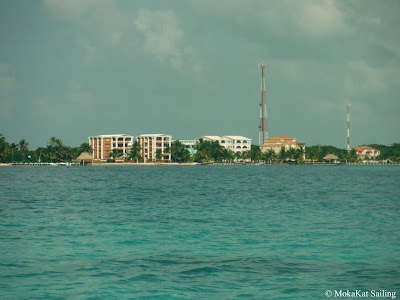 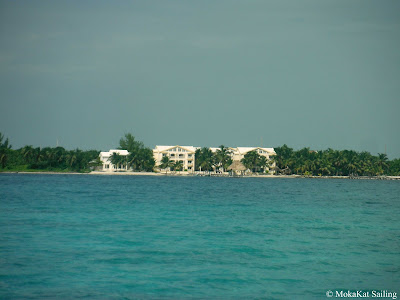 We arrived in San Pedro, which has it's anchorage on the east side, but protected from the ocean swells by the barrier reef.  They say that the anchor holding here is not good, as the sand is usually about a foot deep and then there is a hard limestone base.  We anchored just past the fuel dock and the busy water taxi dock in about 6 feet of water.  We thought this would be a good spot, as all of the water taxis would be heading south, away from us.  What we didn't know is that many of the dive boats go  north to pick up tourists.  We felt that we were in the median of a super highway, as we had boats zipping on all sides of us!  After a few days of this nonsense, we finally moved back south and further out.  It was better, but still this anchorage has a lot of movement.  We are glad that we are in a catamaran, as it doesn't rock too much! 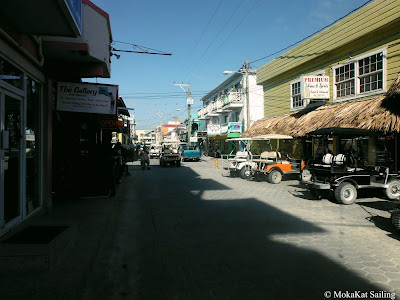 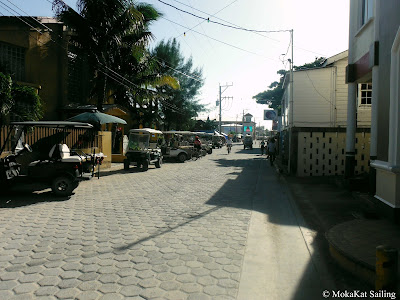 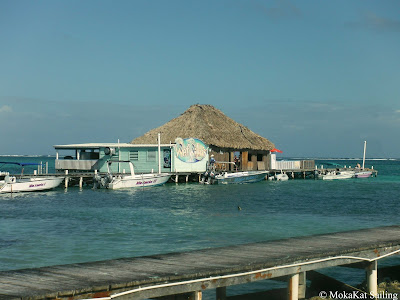 Wet Willy's, good food and drinks, but no Internet!!! 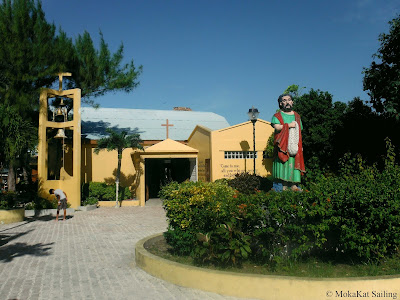 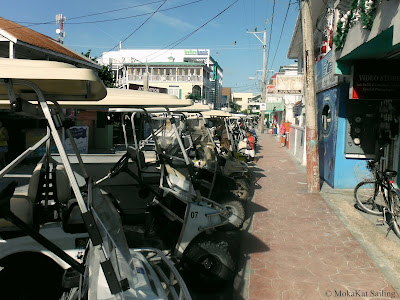 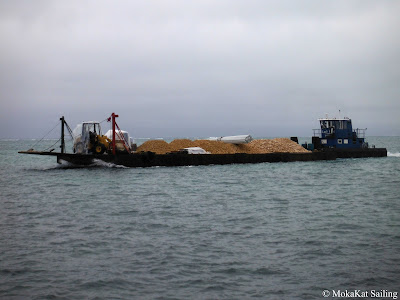 The many different barges bring supplies to the island 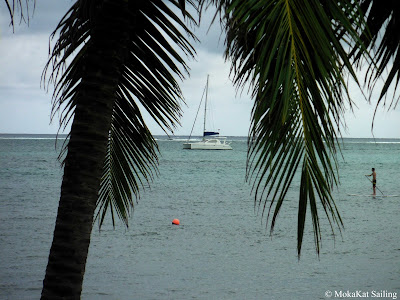 MokaKat at anchor at San Pedro
The plan for San Pedro was to wait here until we picked up my son, Blake, who was supposed to fly in on the 22nd.  Well, there was a huge ice storm in Oklahoma, and he couldn't get to the airport, and missed his flight.  He was finally able to get a new ticket for Christmas day, so we waited a couple more days for him to arrive. 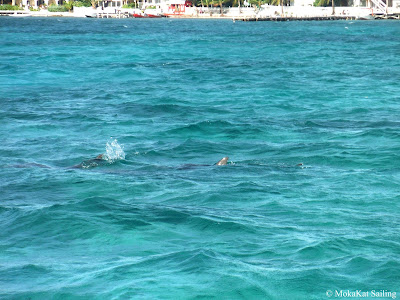 A dolphin family coming over to visit 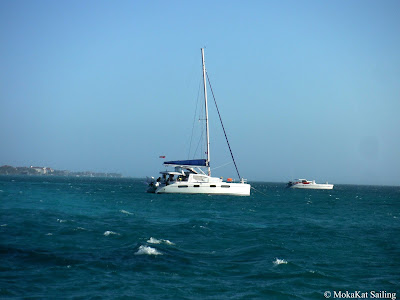 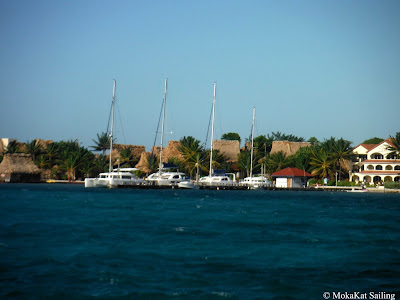 TMM Docks, where we may leave our catamaran in their charter services when I have finished my sabbatical 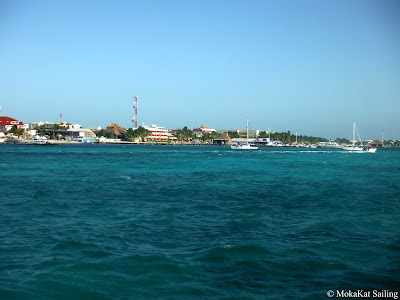 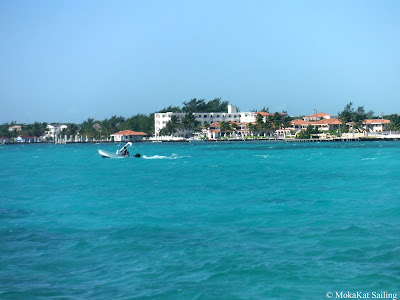 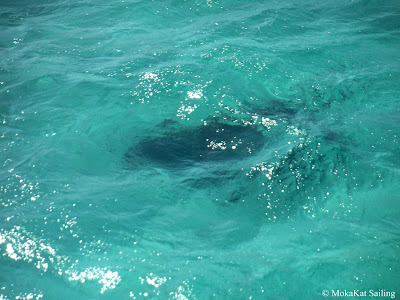 We cleaned out our freezer one day and threw away some old fish.  About 30 minutes later, a large shark, about 9 feet, hung around our boat for a while.  This was the best picture that I could get of it, as I didn't want to get into the water.  One of the local guys said that it may have been a bull shark.  We didn't snorkel for about an hour after he left and still I was looking around nervously when I did. 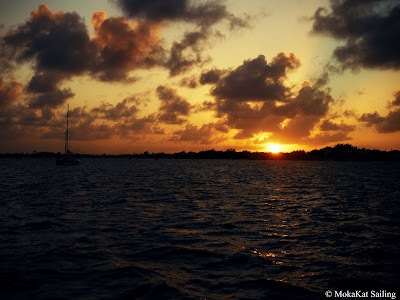 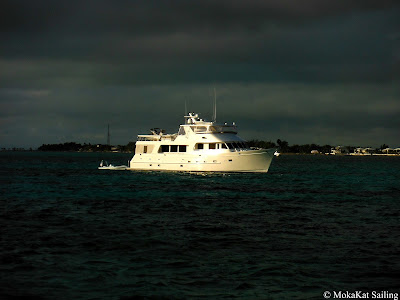 One of our neighbors for Christmas
Posted by Unknown at 3:16 PM