We stayed in San Pedro for several days, renewing our boat and personal immigration visas and waiting out a northern front.  Immigrations is easy to do it here, as you just walk about two blocks from the TMM dock.  We need to renew our visas every 30 days, which is a real pain in the butt for us long term cruisers.  In other places in the country, you have to take a long dingy ride and a taxi, or a long bus.  Even though the immigrations was easy here, we also need to pay for our boat cruising permit.  We try to keep both in sync so that we don't have to pay any penalties at checkout.  The port captain was a different story, so I had to hire a taxi to drive about four miles to their office.  It was a long four miles through rough roads and mud puddles!  I was glad that I was in a taxi.  Also, some parts of the town were very run down and would not be the safest for me to walk.  The port captain was very nice, and we caught up out cruising permit for the next month.  We have to pay $5 B ($2.50 US) per day to have the boat stay in Belize waters.  This is on top of a $25 US per month, per person, personal visa. 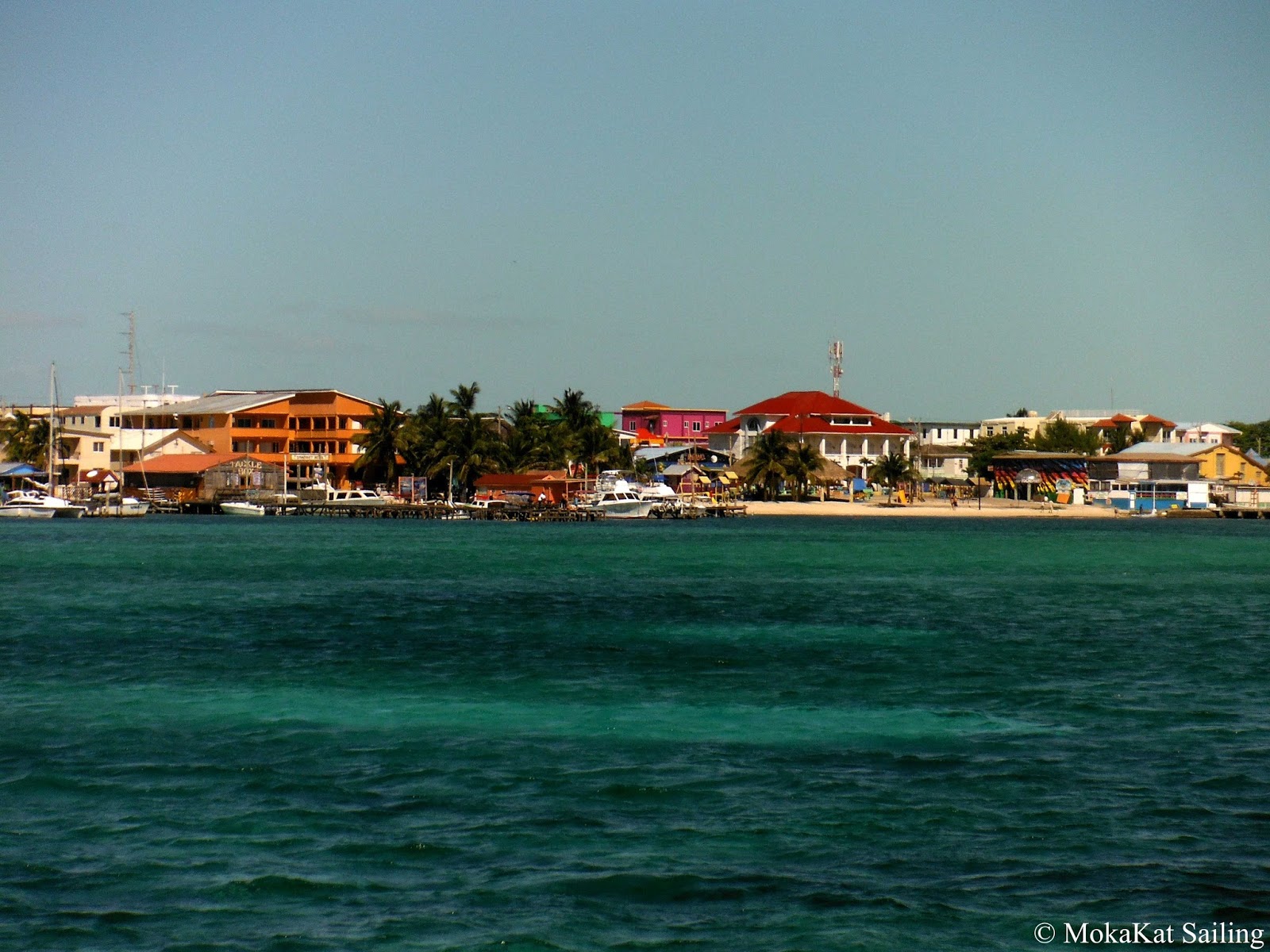 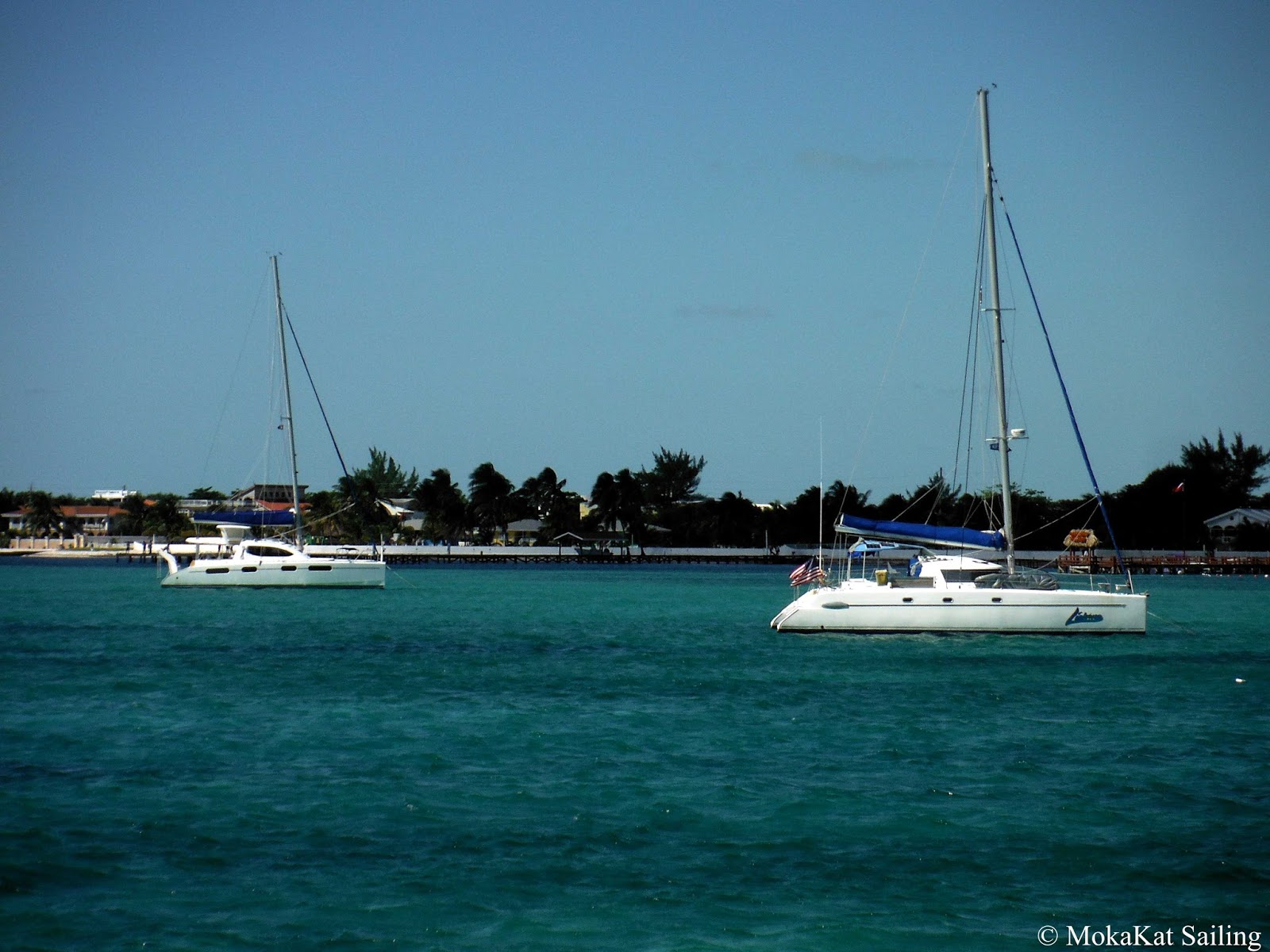 Other catamarans at anchor with us at San Pedro
We were able to watch a junior regatta on a Sunday afternoon!  They put out some starting buoys and another one about a mile away!  The kids are from 8 to 12 and really know how to sail.  As you can imagine, trying to round up all of the boats for a start was difficult, as the kids were really enjoying the day.  At the last, they all lined up, and the race started!  They looked like they had a great time during the race. 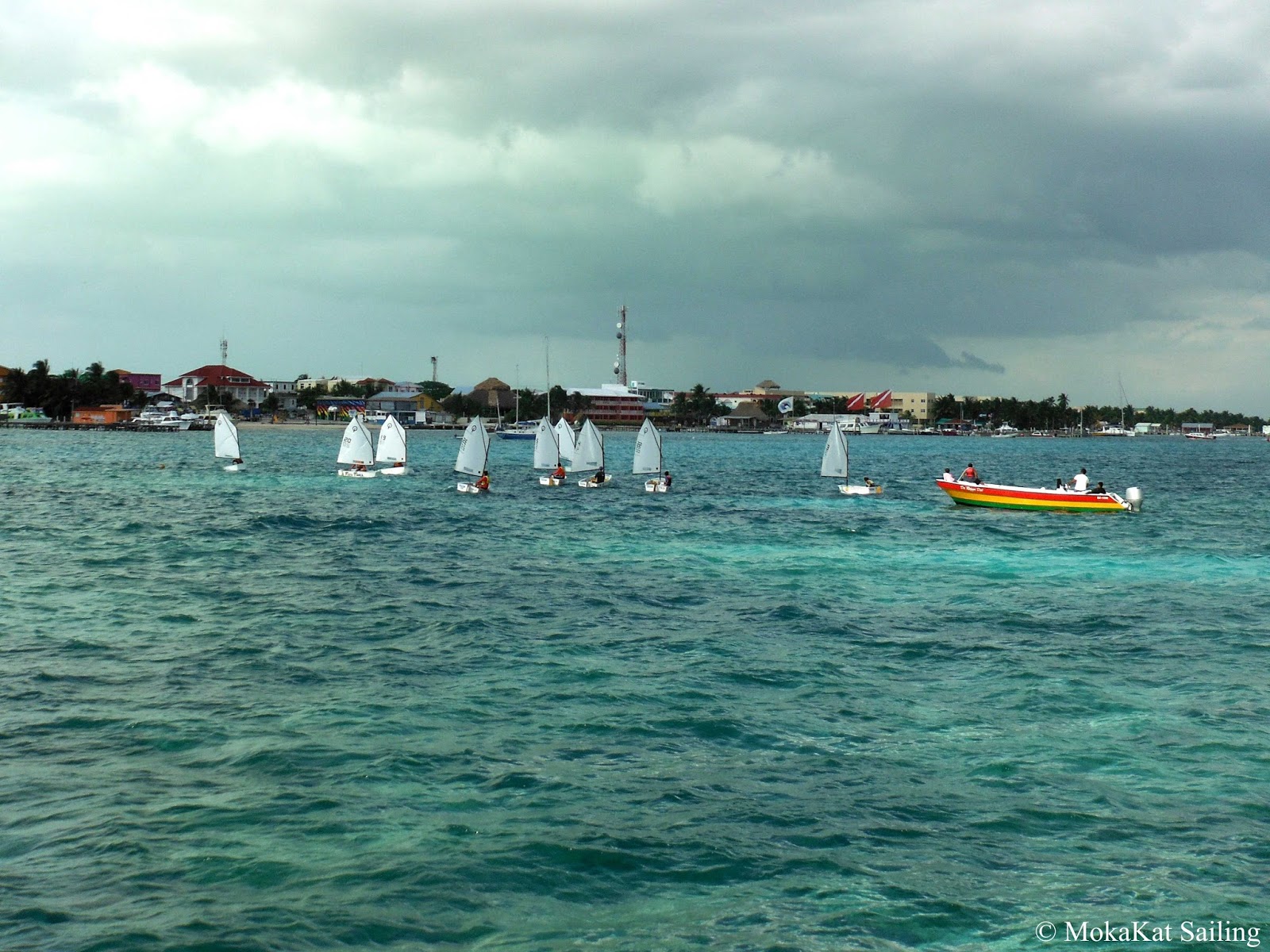 Trying to round up all of the kids! 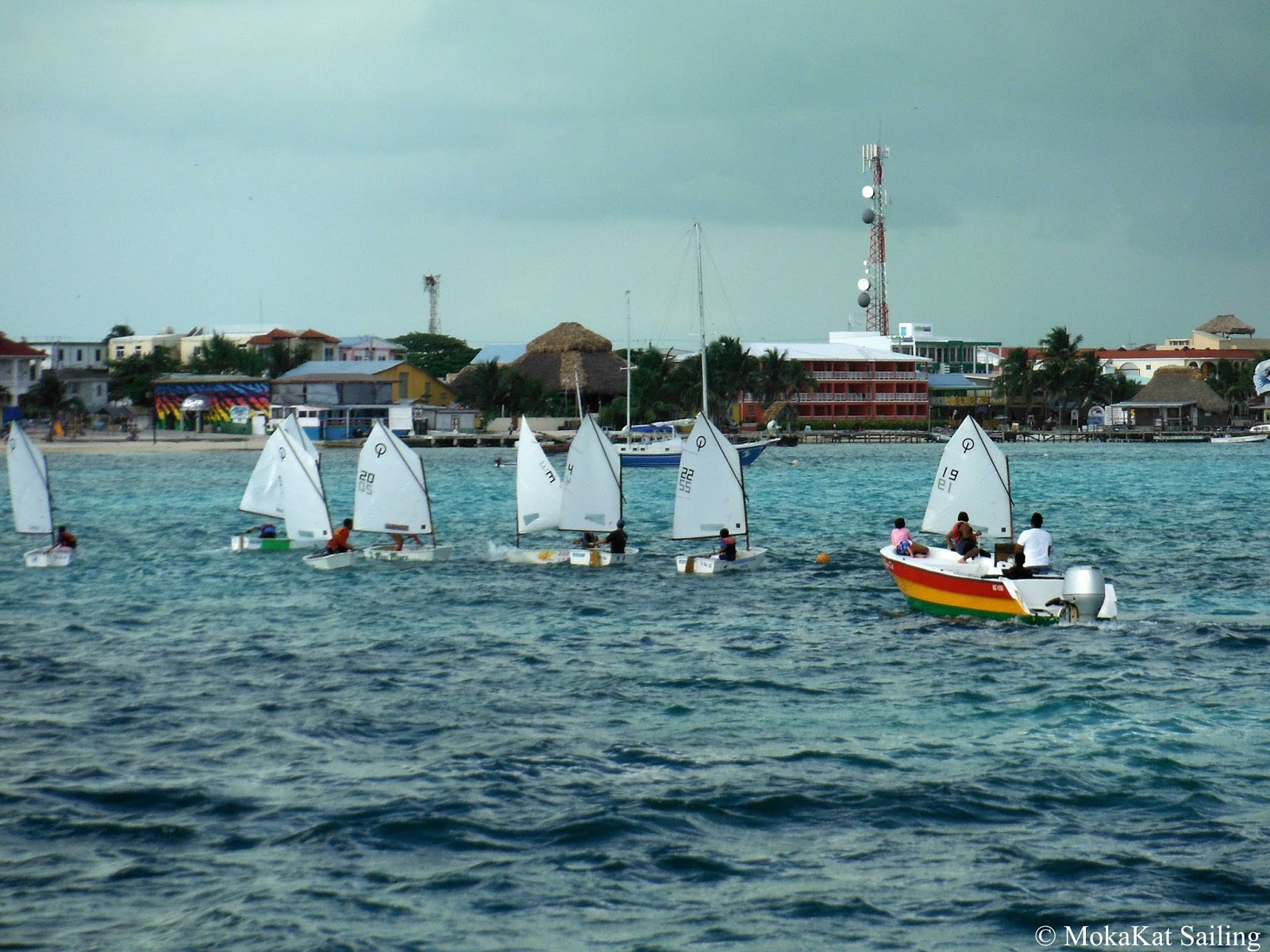 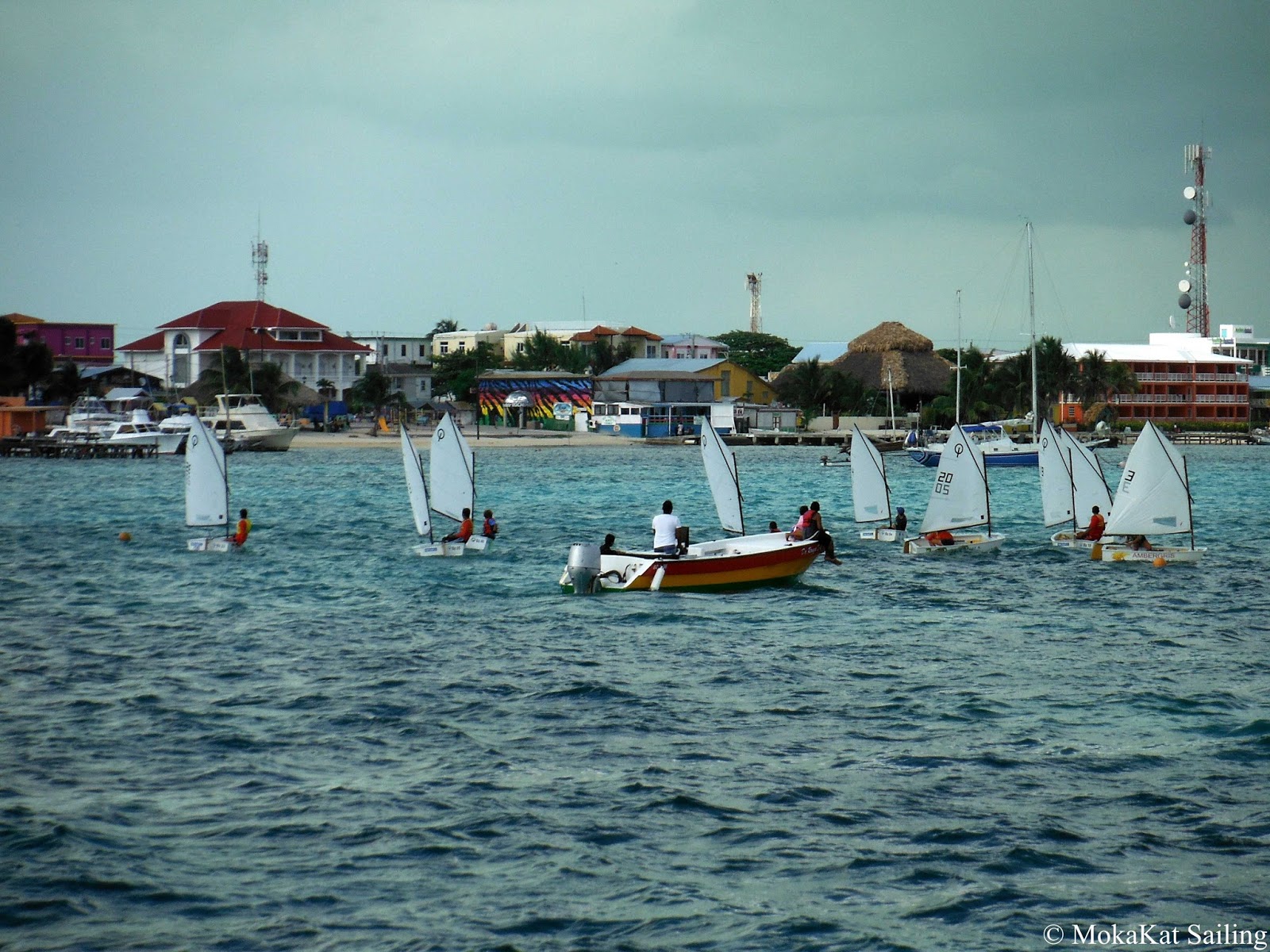 The rolly anchorage finally got the best of us, and we were ready to head back to Cay Caulker.  We had an easy sail to Cay Caulker and anchored next to s/v Hellion and our friend Drew.  We were able to stock up on cases of cokes and beer, ice, and got our clothes cleaned.  There was another northern coming in, so we needed to head south to find a more protected anchorage.

Our plan was to head out the pass just south of Cay Chapel.  This would be our first time to be outside the barrier reef.  We would then sail down to the ship channel, and anchor at Water Cay.  At least that was the plan.  After passing Cay Chapel, I headed directly east toward the pass.  We had about 2 miles of shallow water before arriving at the pass.  The wind picked up to 20 knots, and we were now on a beam reach, pushing our speed past 7 knots!  Yikes!, the large waves, shallow water, and high boat speed started making me nervous.  Mom was sitting on the front looking for coral heads and shallow water.  It was hard to see anything except rough water and waves, so I finally turned around and headed back the way that we came.  This pass will have to wait until a calmer day, at least for my first time out the pass.  We were disappointed in not going out the pass, but safety is always number 1.

We then sailed down through Porto Stuck pass and Swallow Cay pass without any issues.  We headed over to Water Cay, anchoring on the south west side of the cay.  There were already four cruise liners at anchor in the distant. 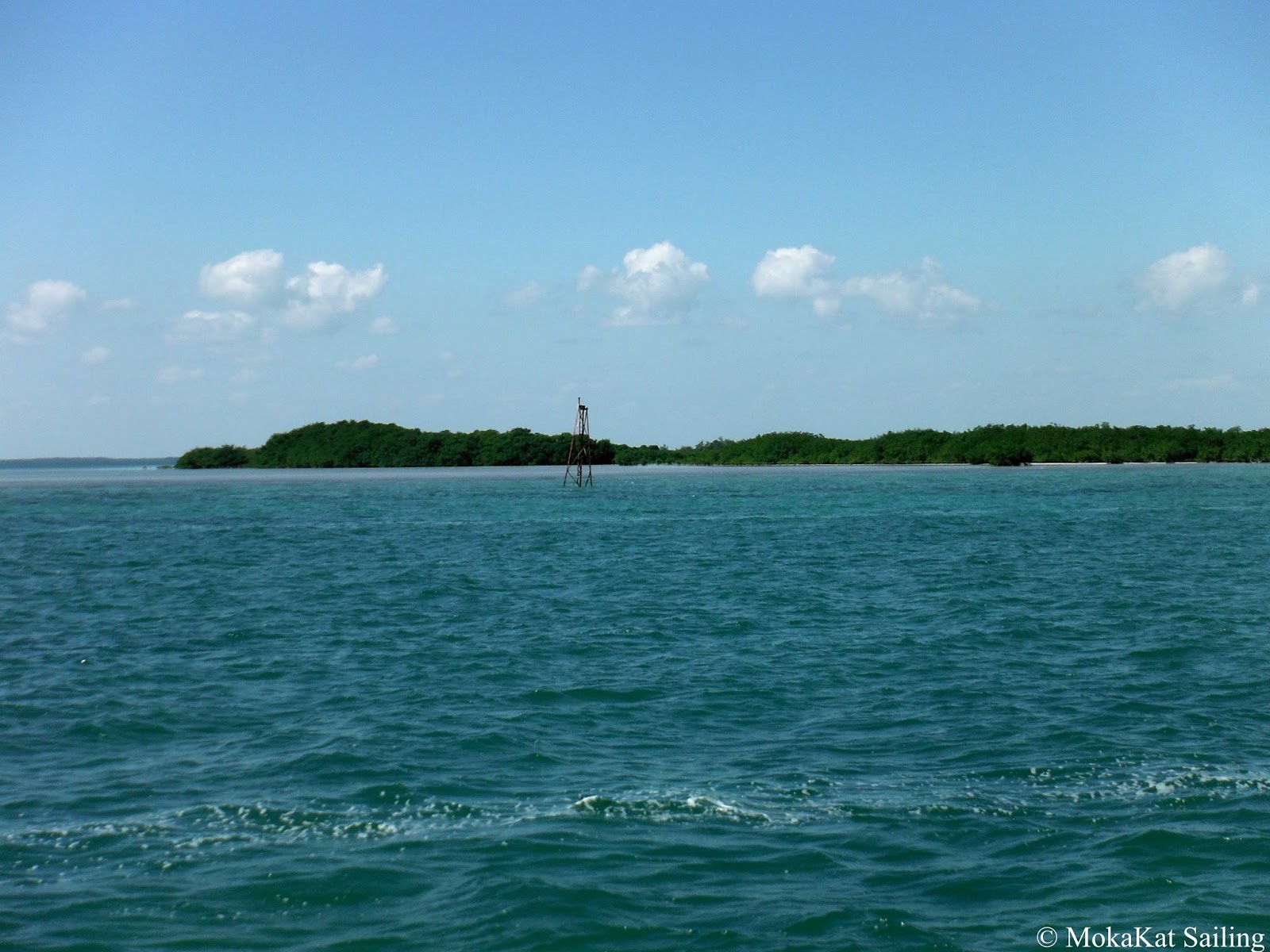 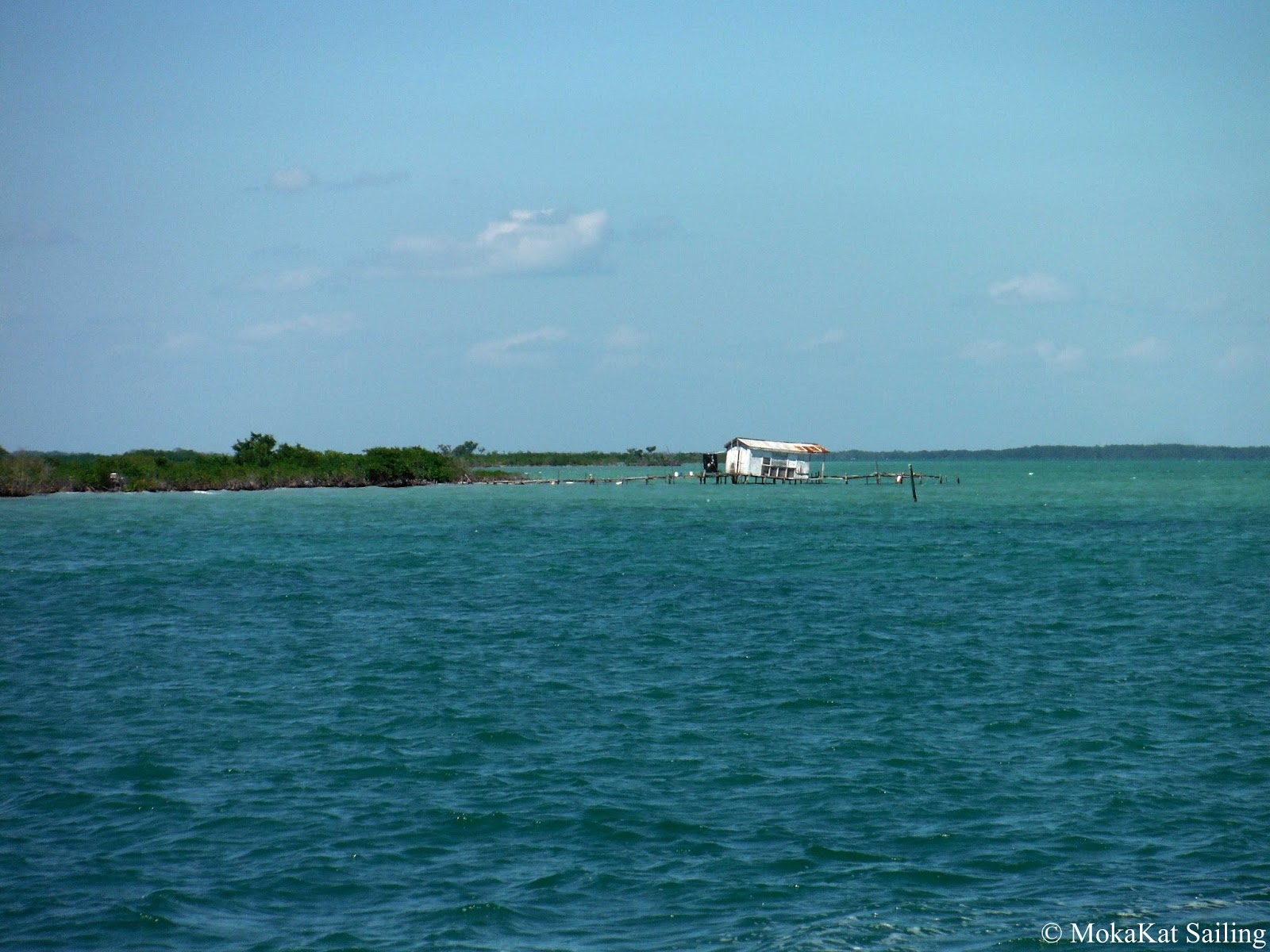 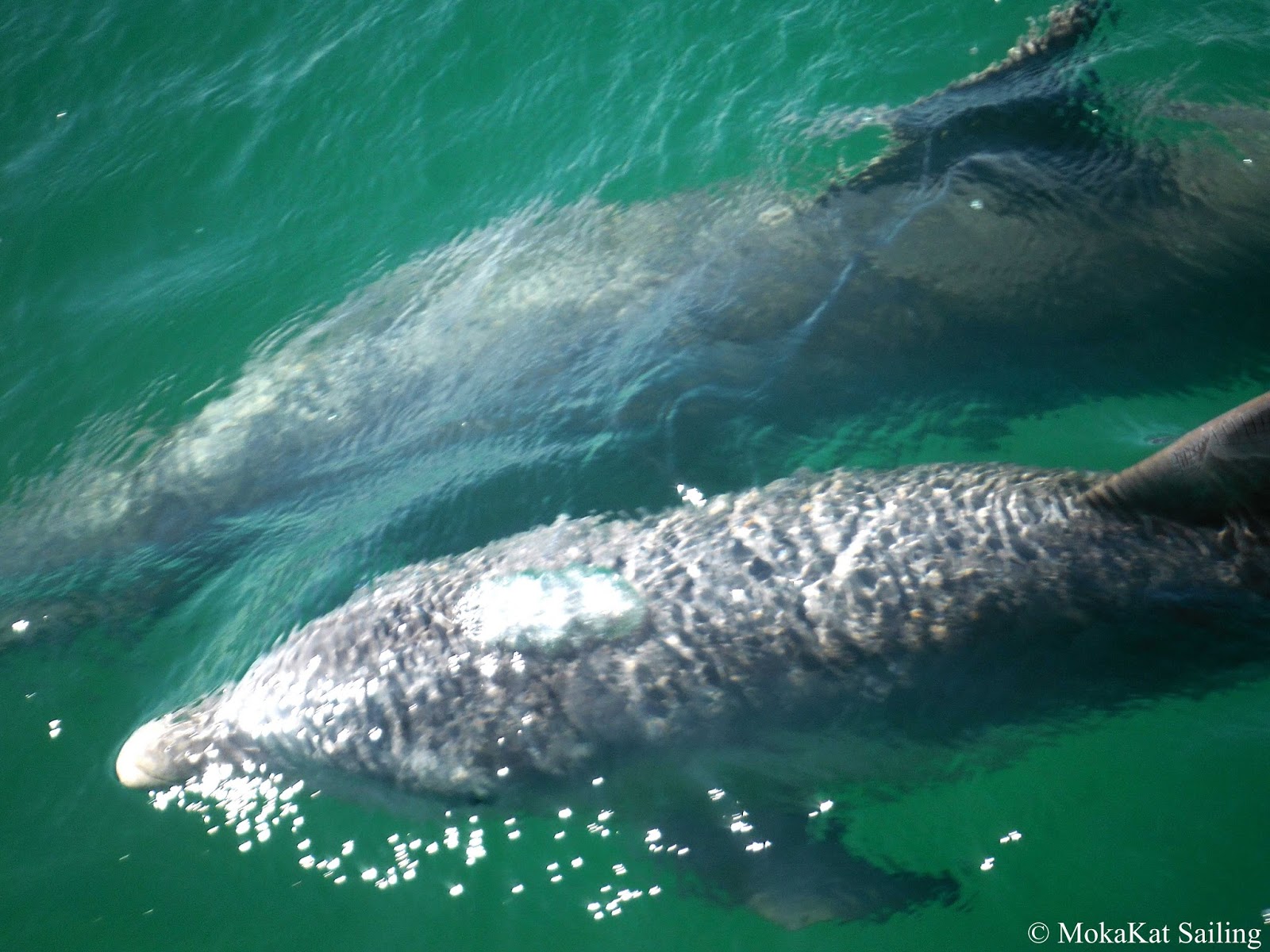 We were joined for a few minutes by a couple of dolphins! 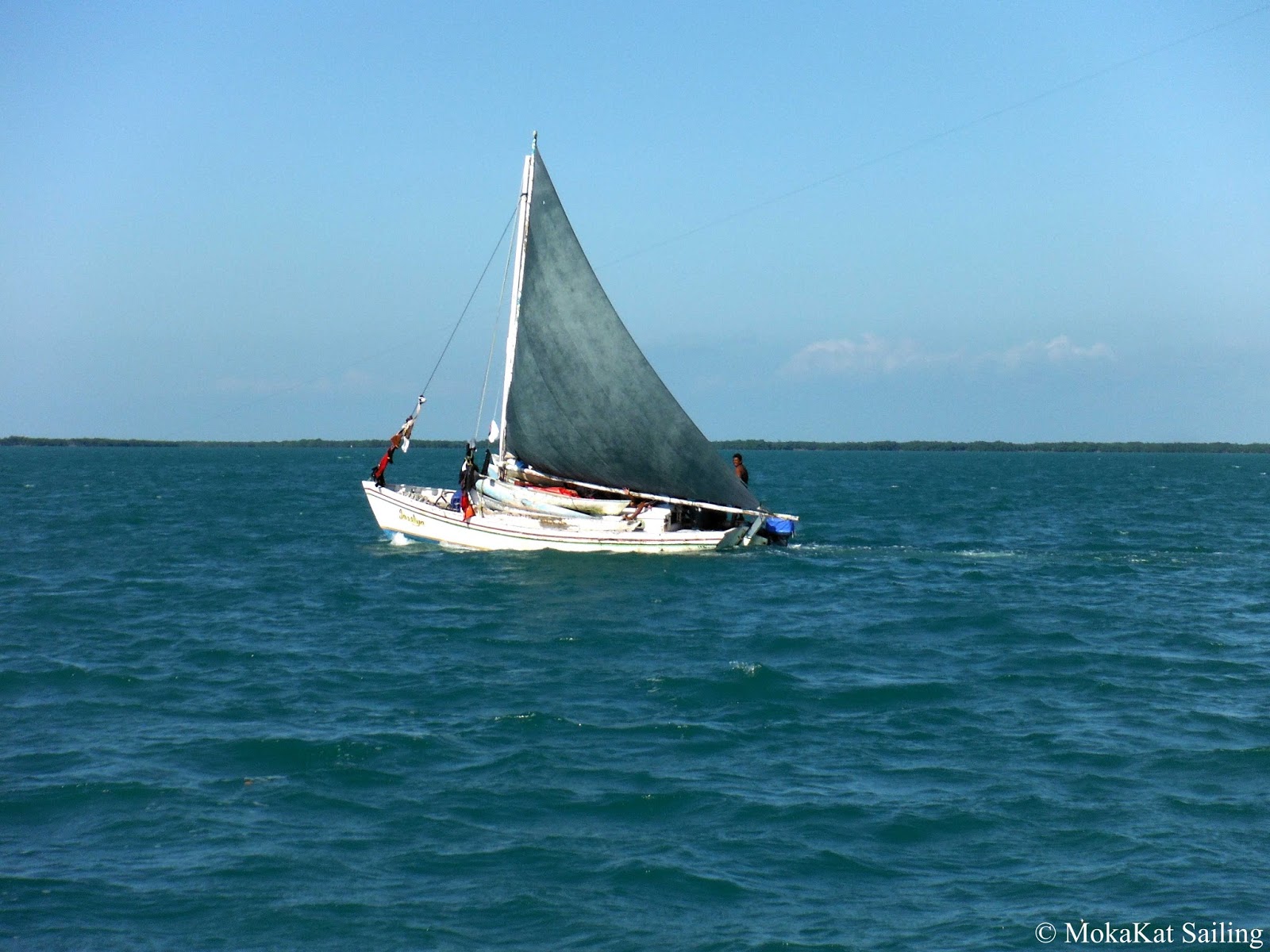 Once we were anchored, our friend Wayne, who lives on the island, paddled over for a chat.  He was the same guy that paddled over in the dark when Blake was with us and about scared me to death.  It was really a dark night, and he paddled up next to the boat as we were cleaning a fish, and said hello!  I think that I jumped a foot!!!
We talked with him for a while and gave him some food.  He lives in the house at the end of the island over the water.  Since it is not technically on the island, he is allowed to stay there, but he can not go ashore.  He has a little solar charger, a battery, a small TV, and a small light.  He cooks on a propane stove.  He gets supplies from fishing boats that come back and forth from Belize City.  It's crazy to see his little house and then see the huge cruise liners, with an incredible amount of electricity, lights, and food, passing almost every evening and morning. 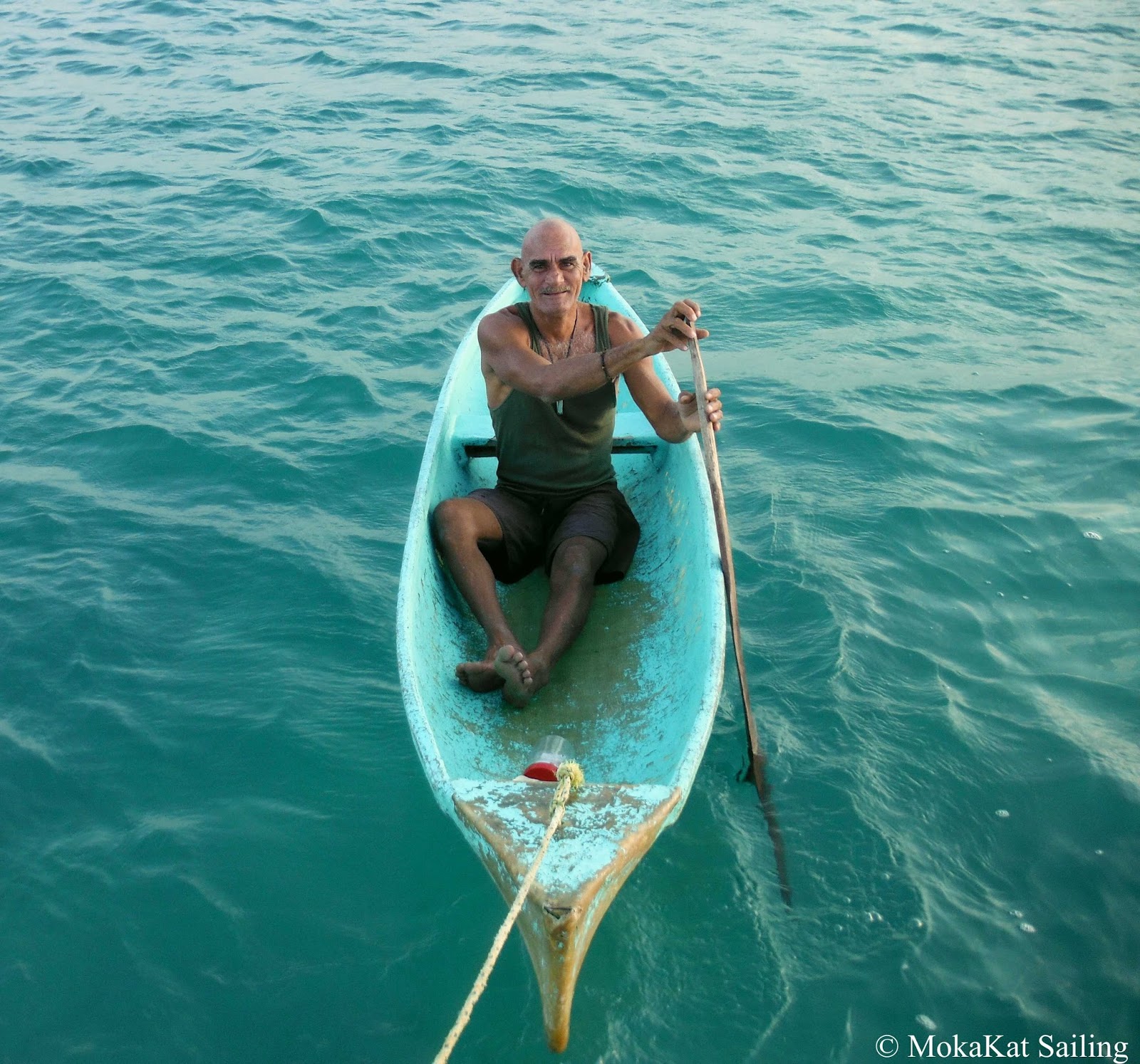 Our friend Wayne paddling up to our boat 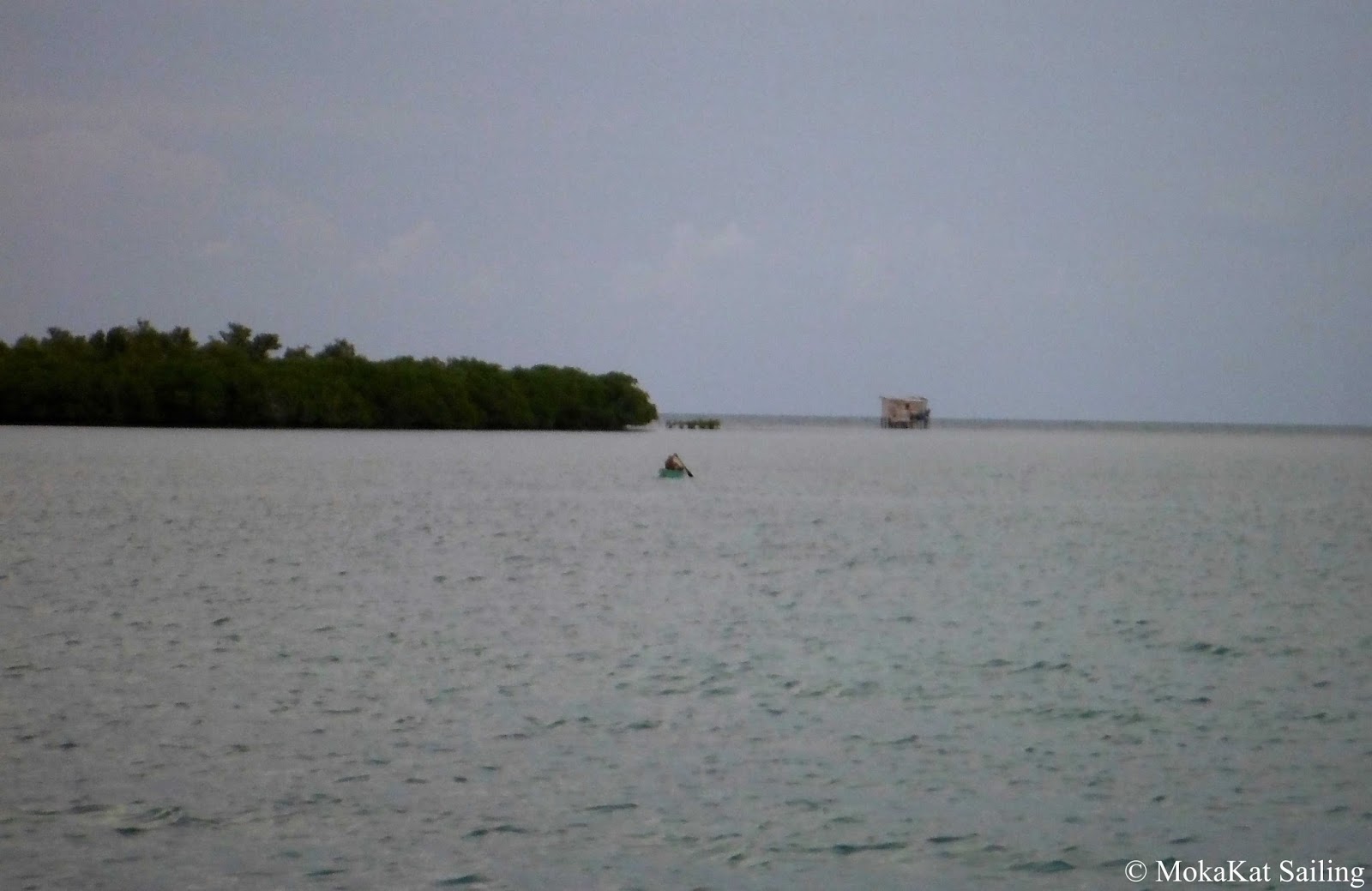 Wayne paddling back to his house over the water 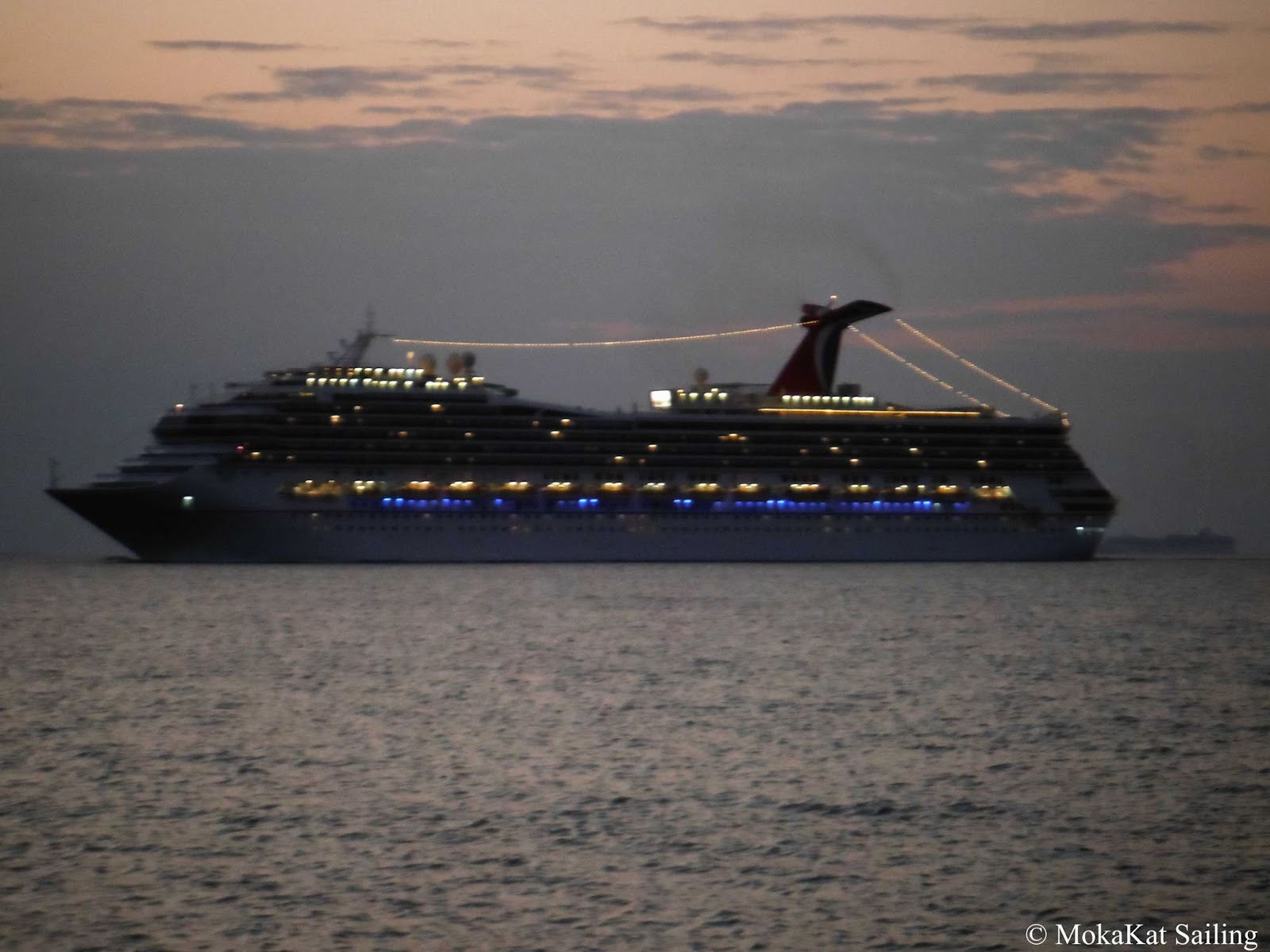 Huge cruise ships heading out to sea, after a day stop in Belize

We watched the cruise lines head out to sea, just as it was getting dark.  I still enjoy seeing these huge ships and the hundreds of tourist cruise by.  They are all lit up, probably using more electricity than a small city.  One of my friends from back at work, Tommy, is supposed to be on a cruise ship heading to Belize.  We were thinking he may be on one of the four ships, but after emailing him, it will be next week before he will be here.

We enjoyed a nice dinner and watched the cruise ships head out to sea.