We stayed in the Cucumber Beach Marina for about 8 days.  It was very nice, and we met several of our friends from other boats.  We planned on staying until the 6th of January, but with a fast approaching cold front, we stayed an extra 2 nights.  Pulling into the marina always give me stress, but the approach was easy, and after doing a 180 at the back of the marina, we pulled over on the starboard dock for a side tie. 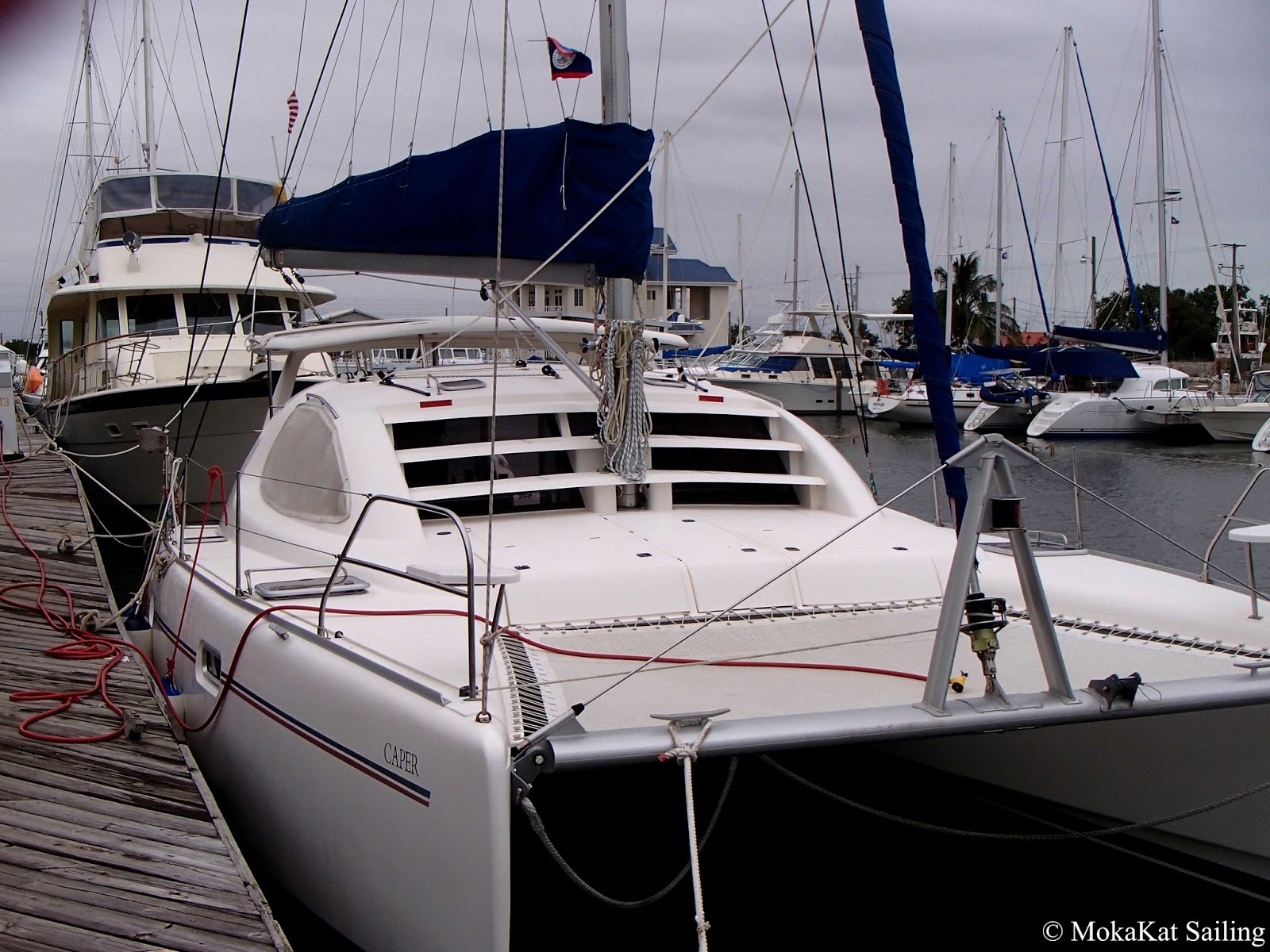 MokaKat on the dock
The marina gave us an easy place to get Blake back to the airport.  We were able to do that on January 1st.  We also needed to replace our house batteries, and a company called RENCO wouldn't be open until the 5th.
The marina is also the base for Belize Sailing Vacation, run by Cliff Wilson Sr. and his son Cliff.  We talked to them about maybe putting MokaKat into their care for chartering, when my year LOA is over.  They provide a captain and crew and show their clients a great time with gourmet cooking and a local captain.  They are family run business and seem to take good care of their fleet.  Their website is www.BelizeSailingVacations.com.
This was the first time that we stayed in a marina since Rio Dulce, but we needed a break and had a list of boat projects to complete.  We were able to eat at the restraurant a couple of times and visit with our friends Brenda and Gene on their boat Island Time.  They have a vast knowledge of cruising and it was nice to visit with them again.  We met them originally in Rio Dulce, back in November. 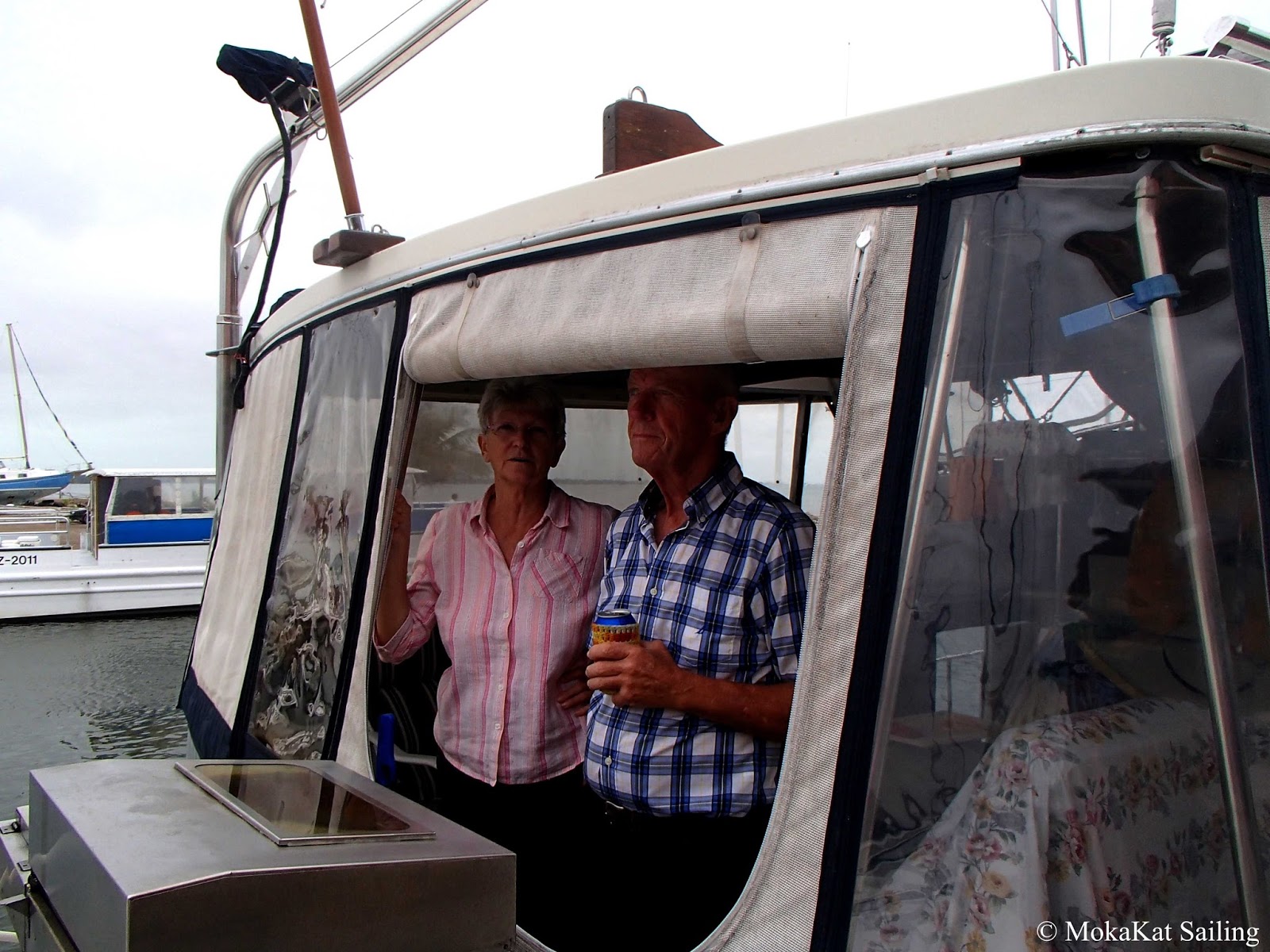 Brenda and Gene on Island Time
The marina is an attraction for many tourist coming ashore from the cruise ships that anchor in the Belize Harbor.  There were times that there were four cruise ships and many tourist came to visit the water park and museum here at the marina.  We felt like we were part of the attraction, as many people waved and started conversations with us, as we carried out our normal boat life.  The cold front that hit for a couple of days really put a dent in their business!  We also stayed inside the boat for a couple of days during the cold front.  I actually had to put on socks and a sweatshirt!  Of course it was only 65 degrees, but for us, it was cold!  I know...Arkansas had -2 degrees, snow, and ice from the same cold front, so we really can't complain too much! 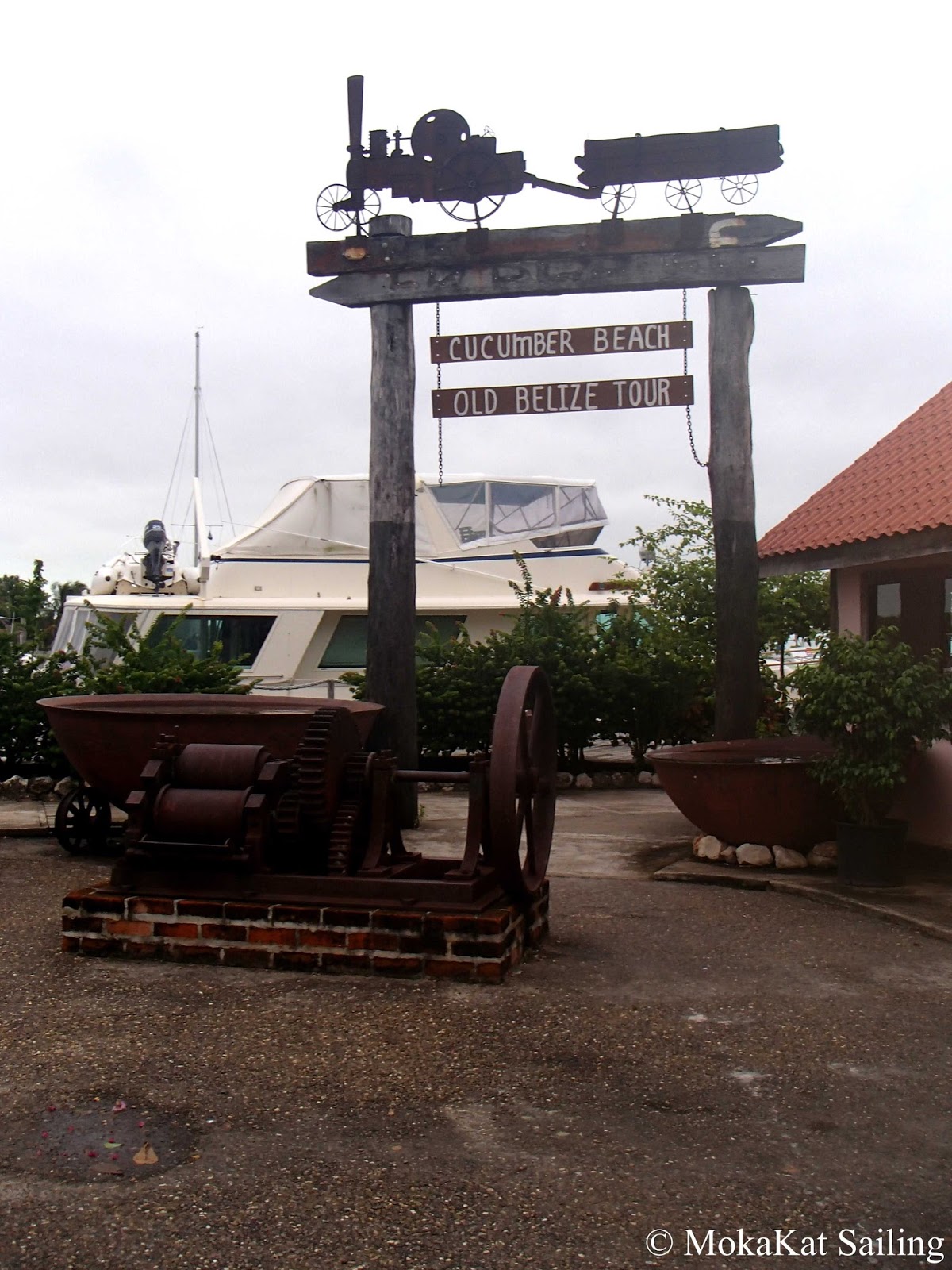 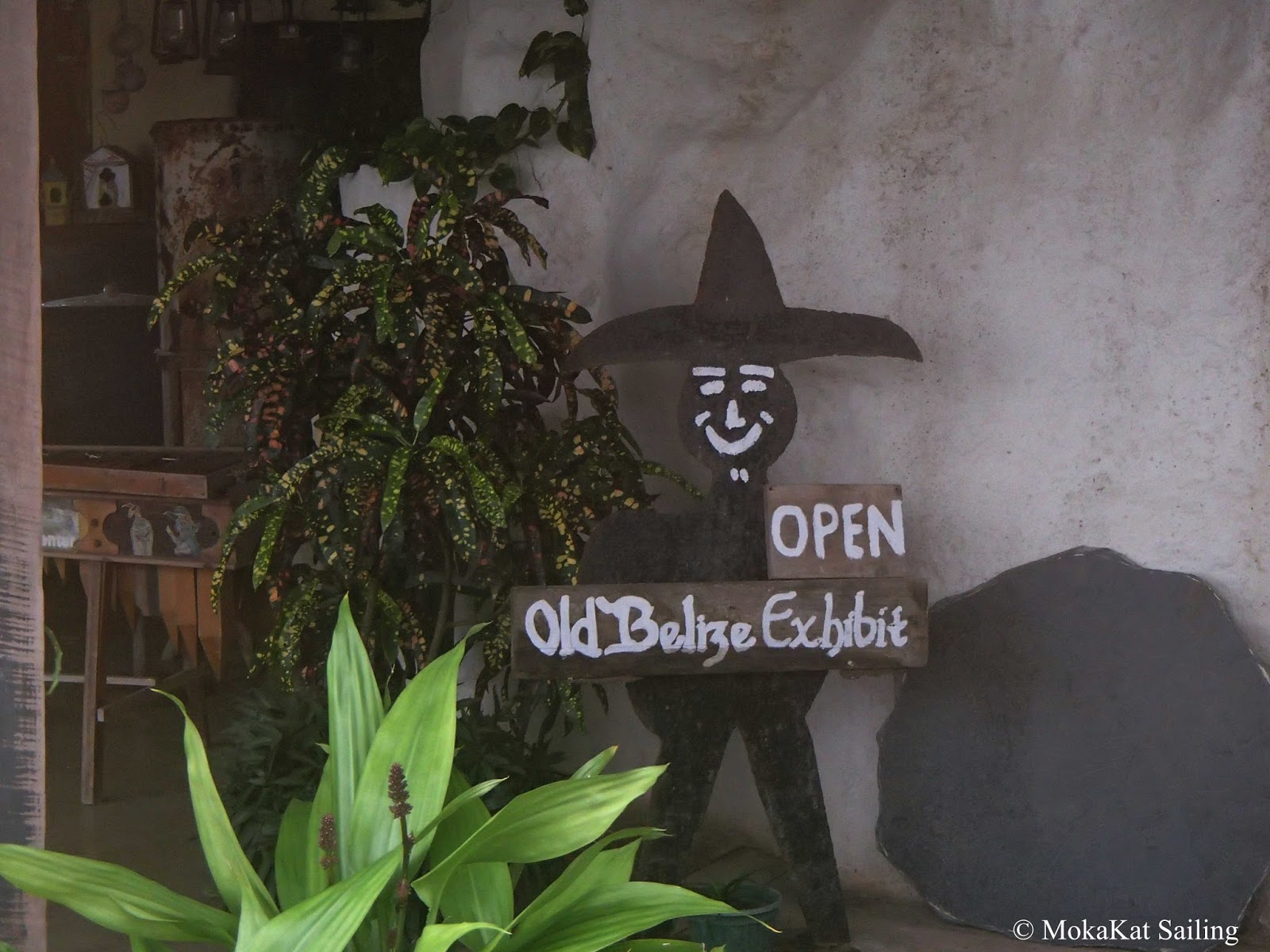 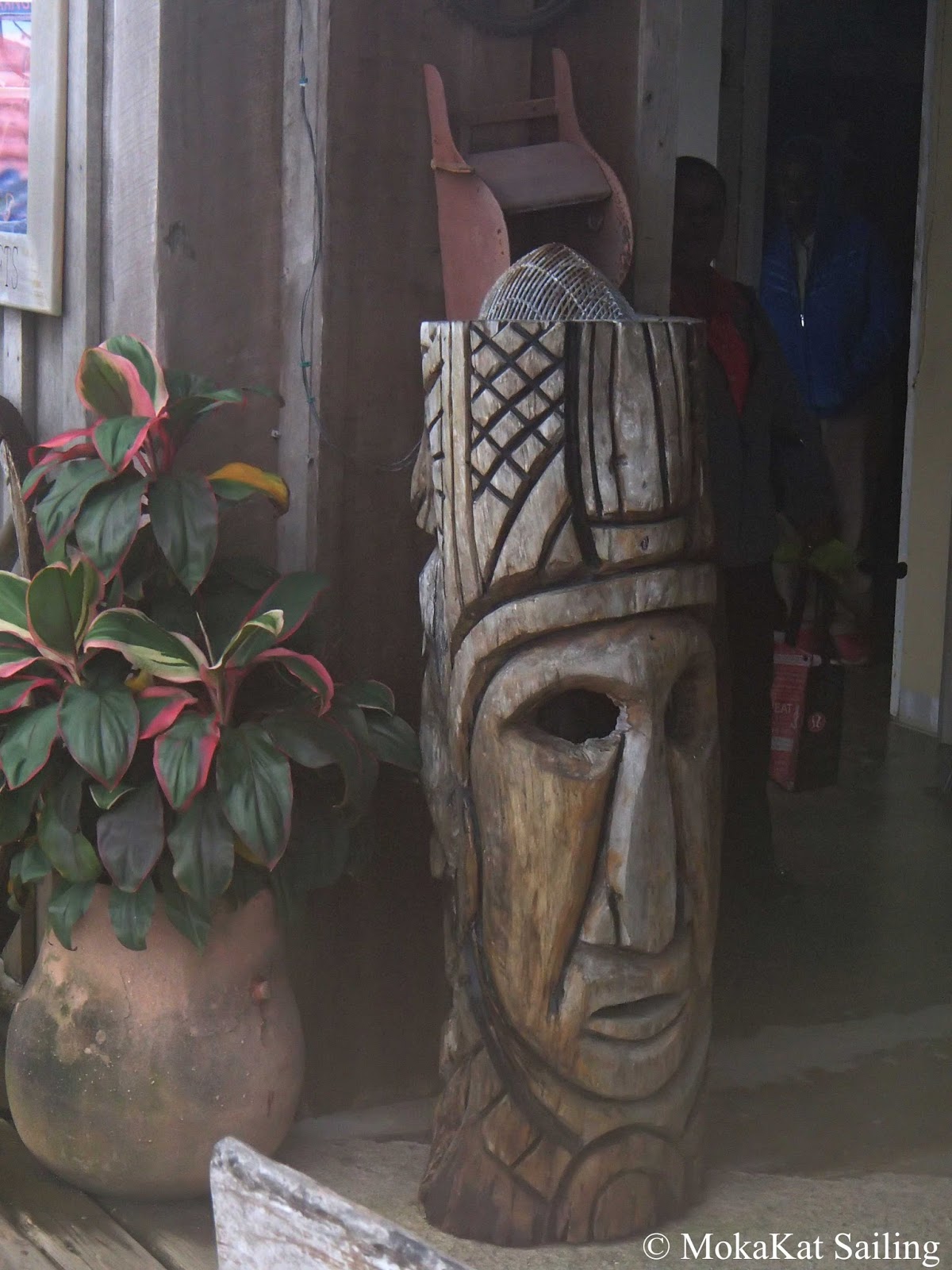 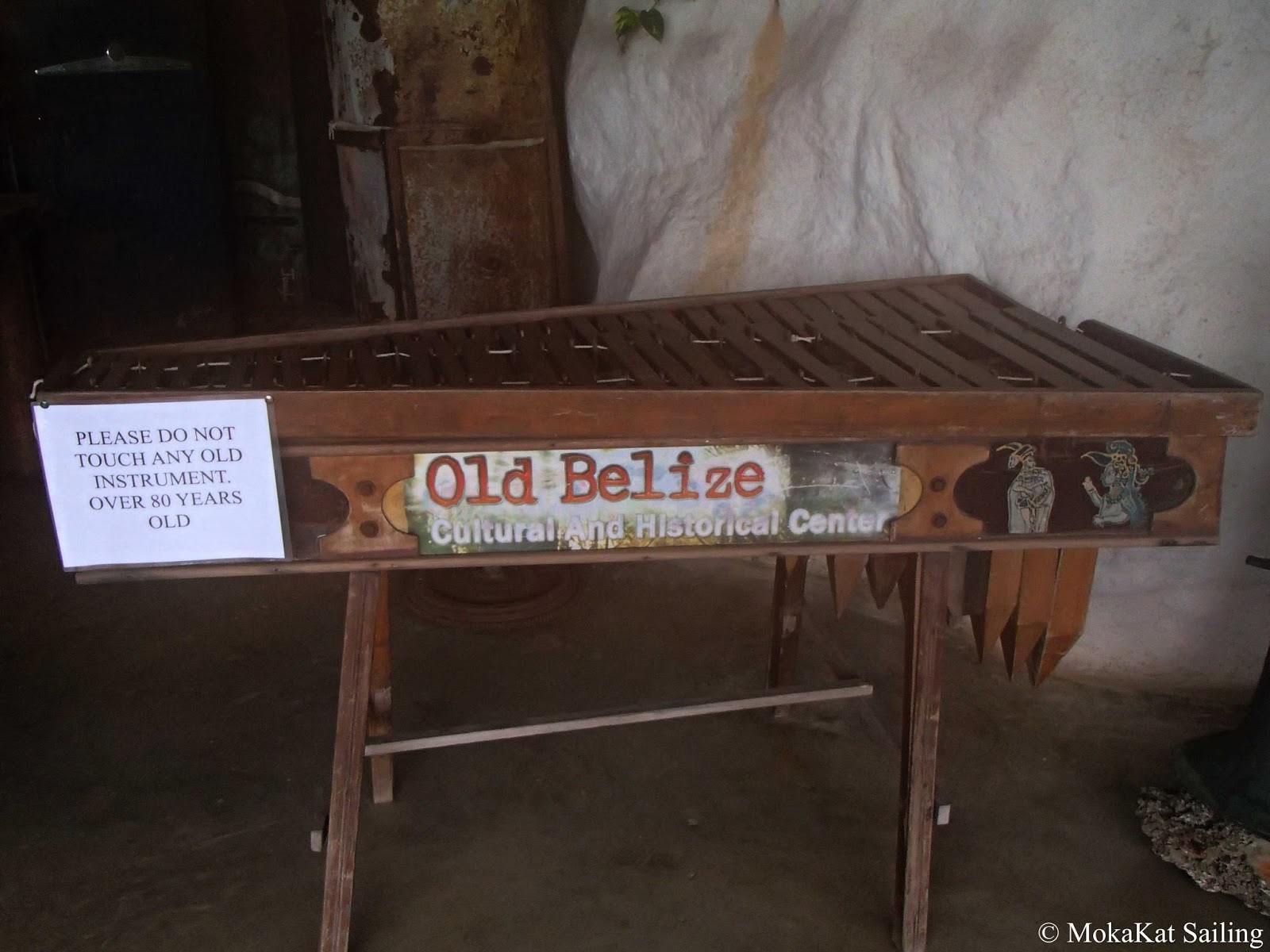 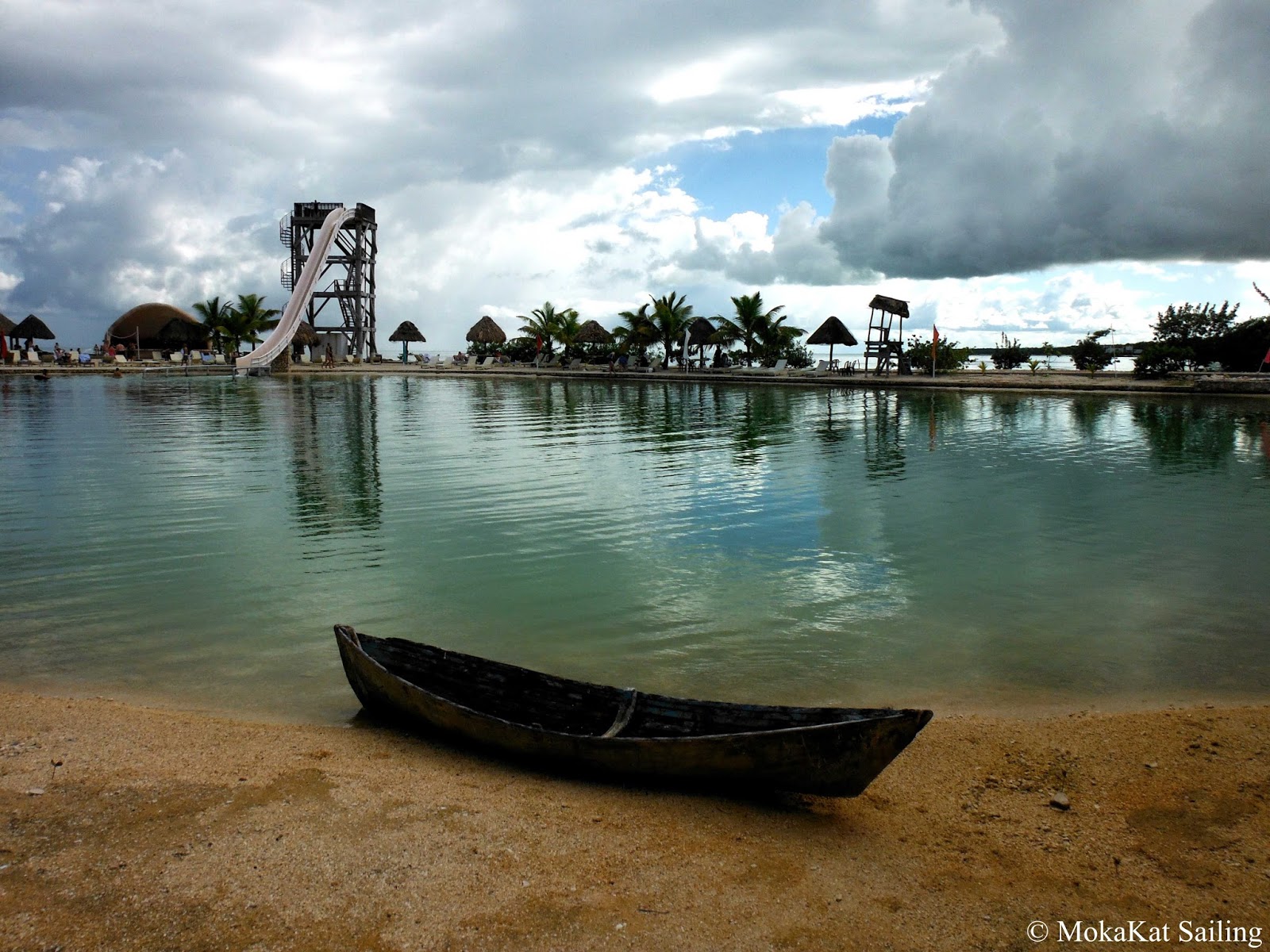 A great water park and slide! 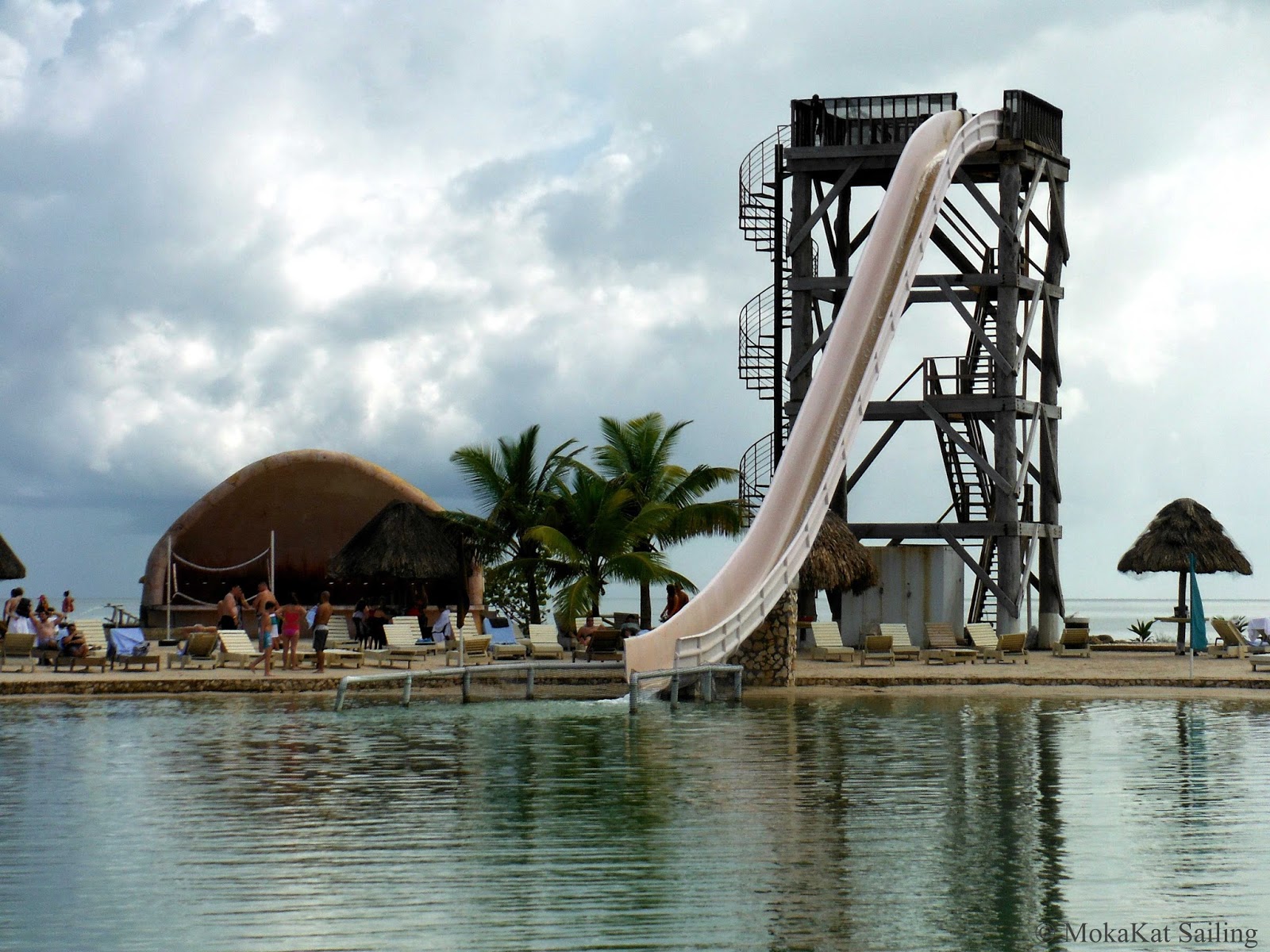 Too bad Blake wasn't here to try out the slide! 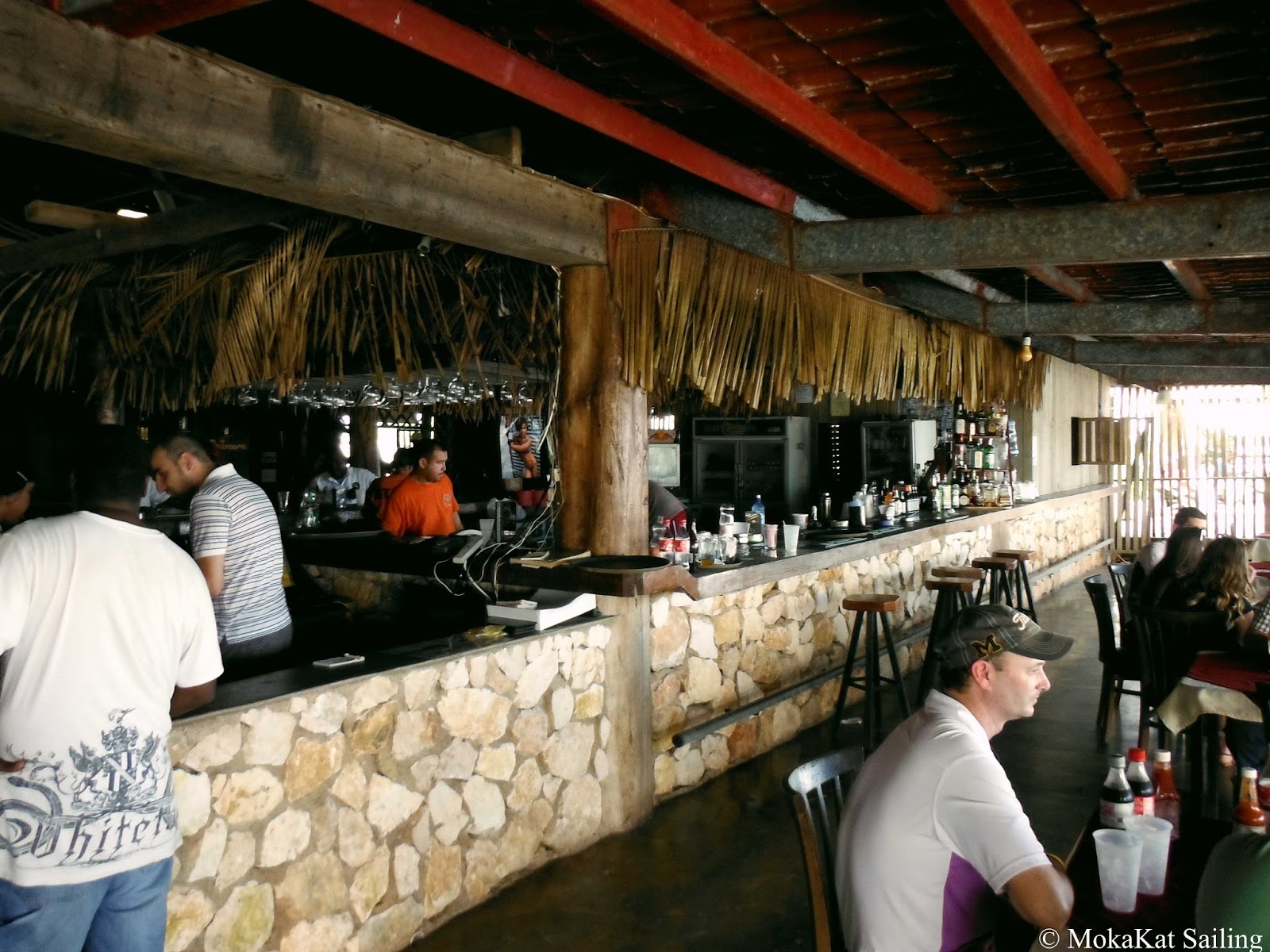 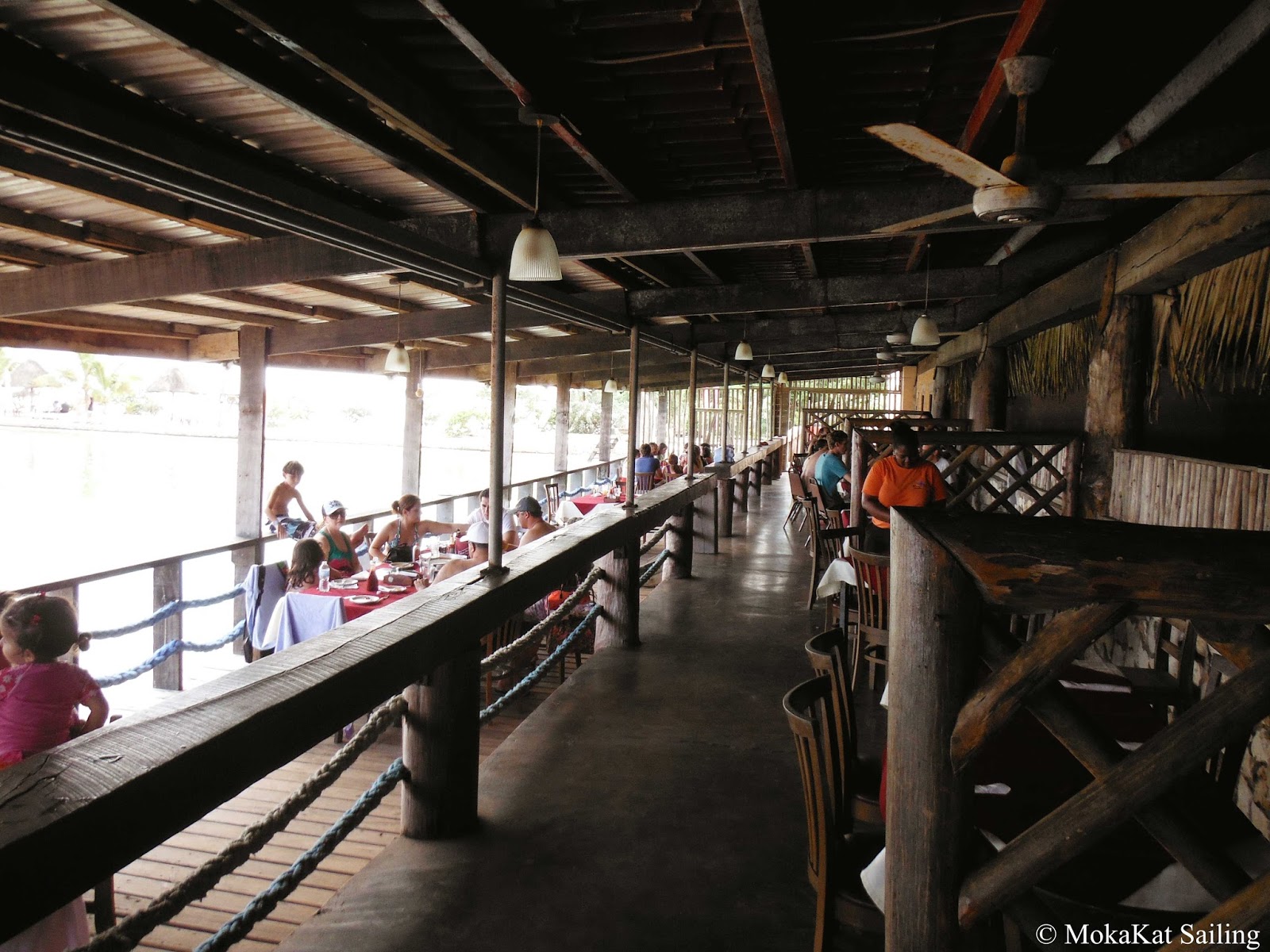 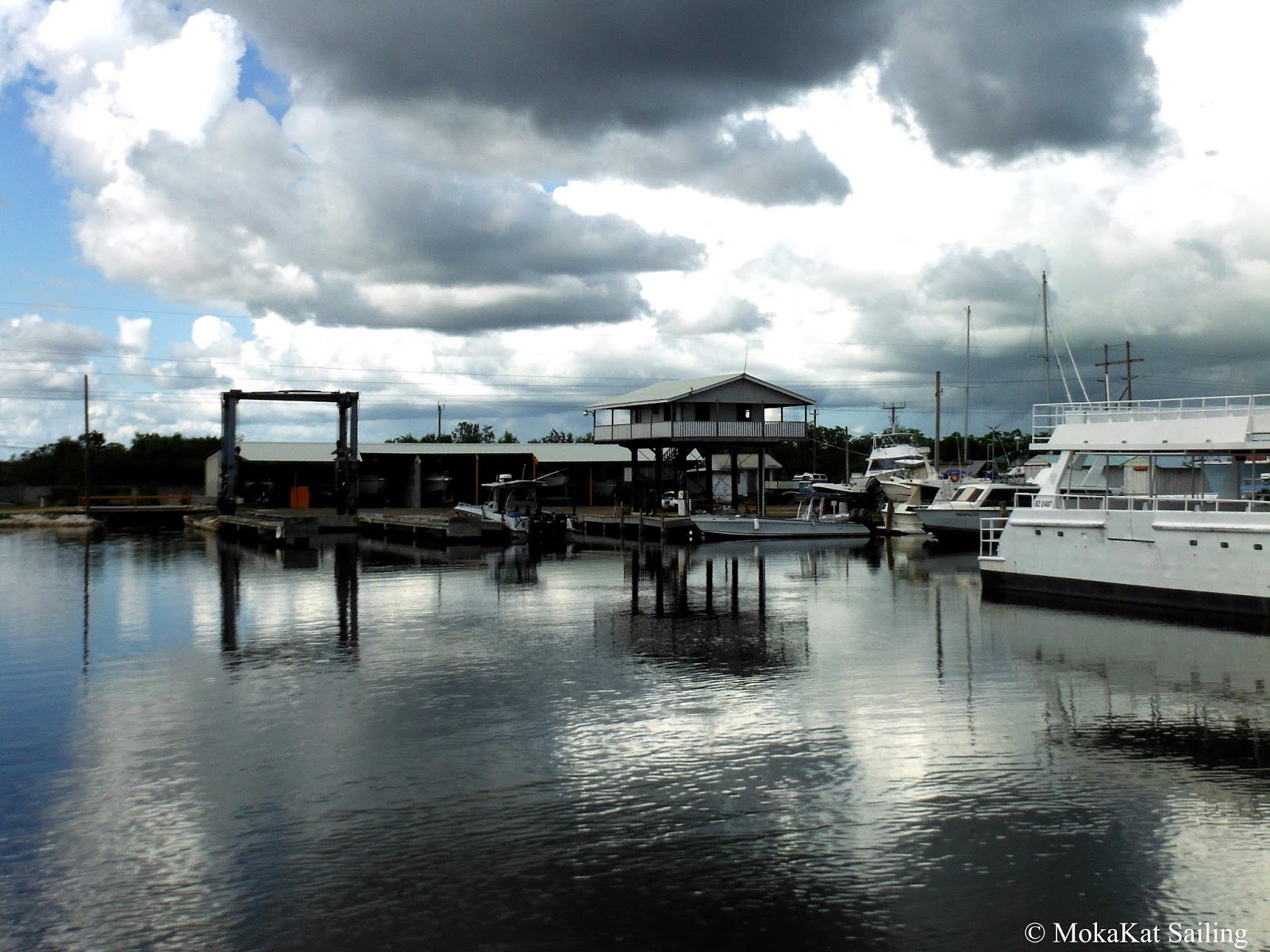 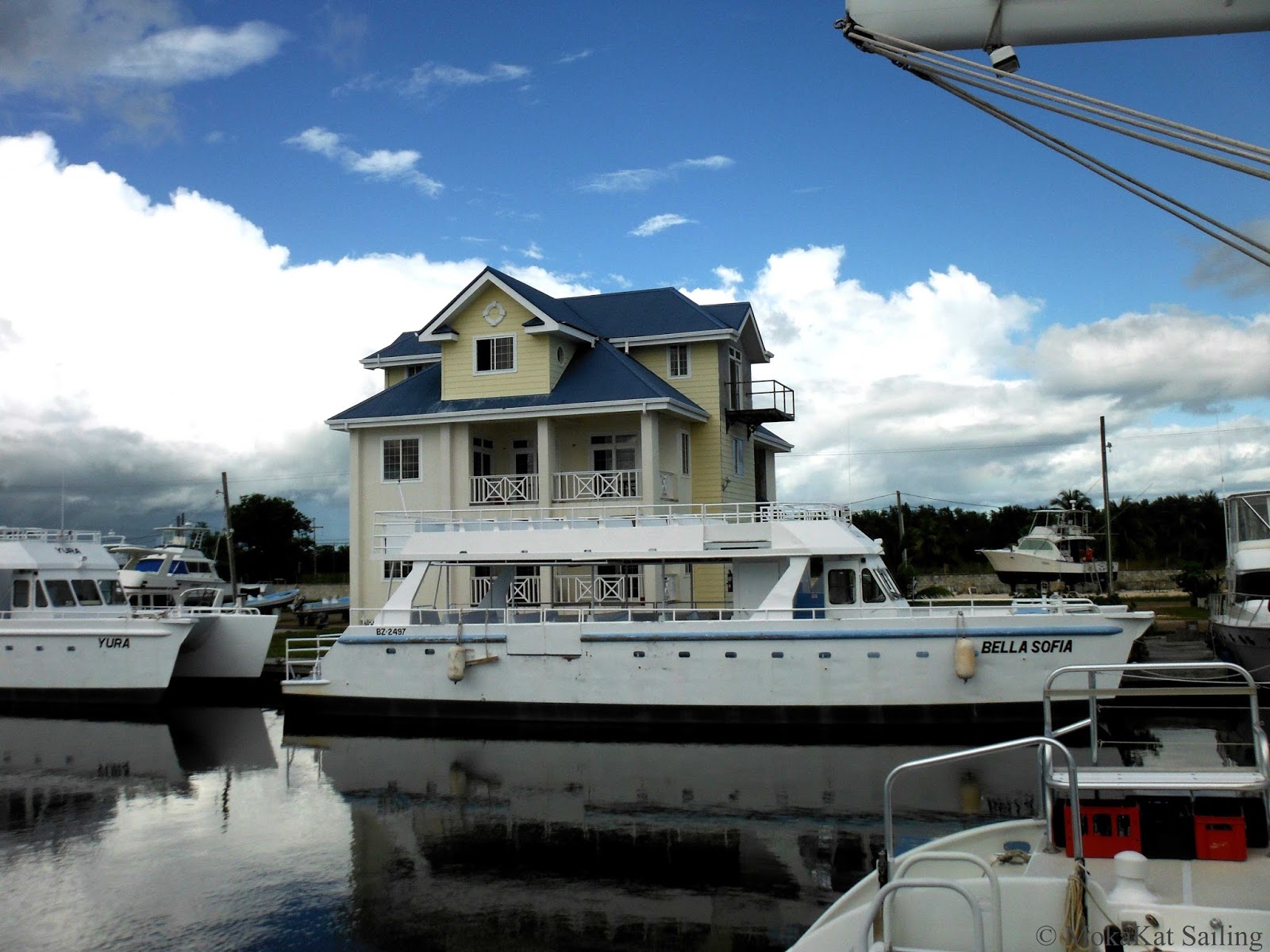 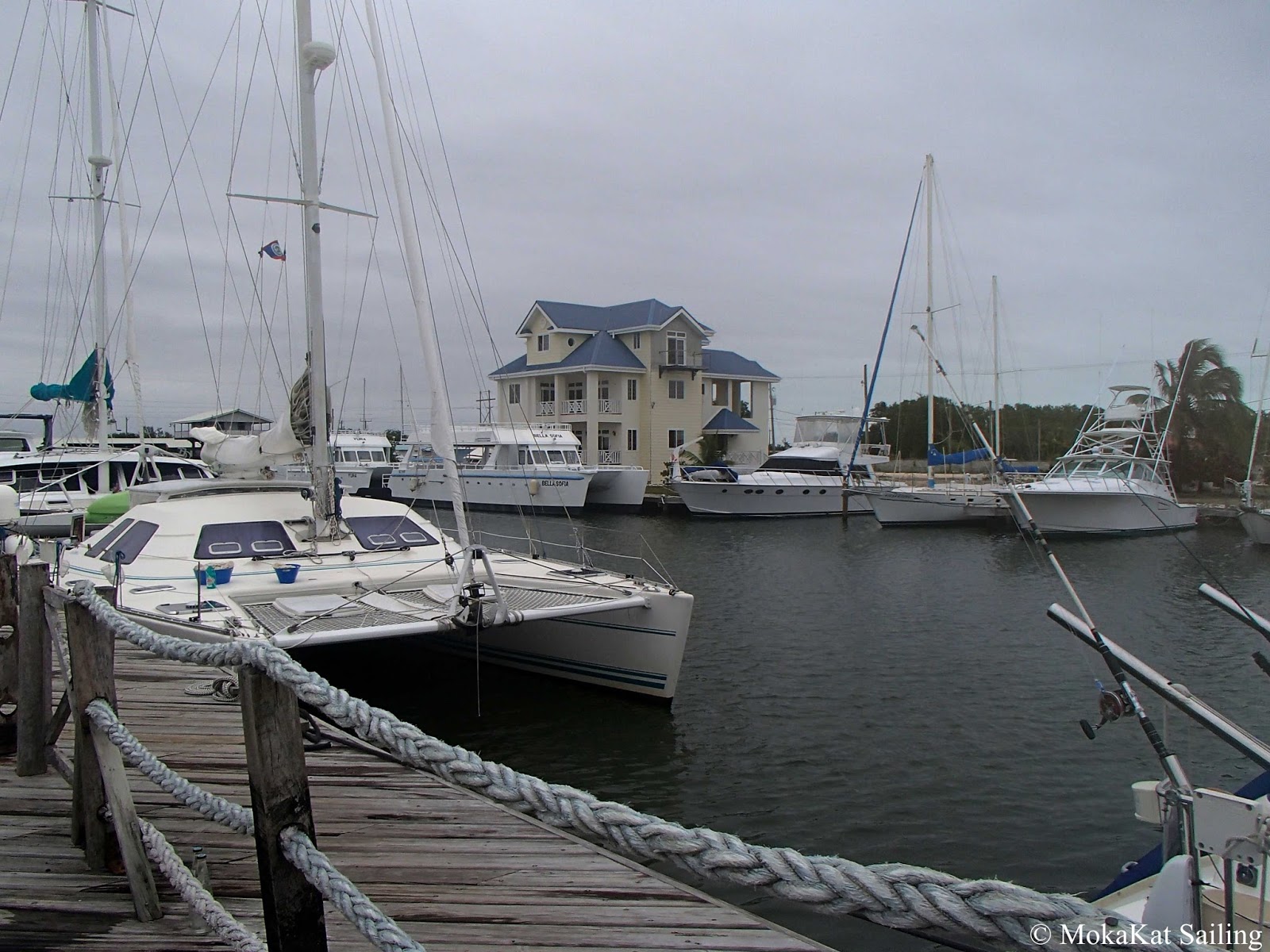 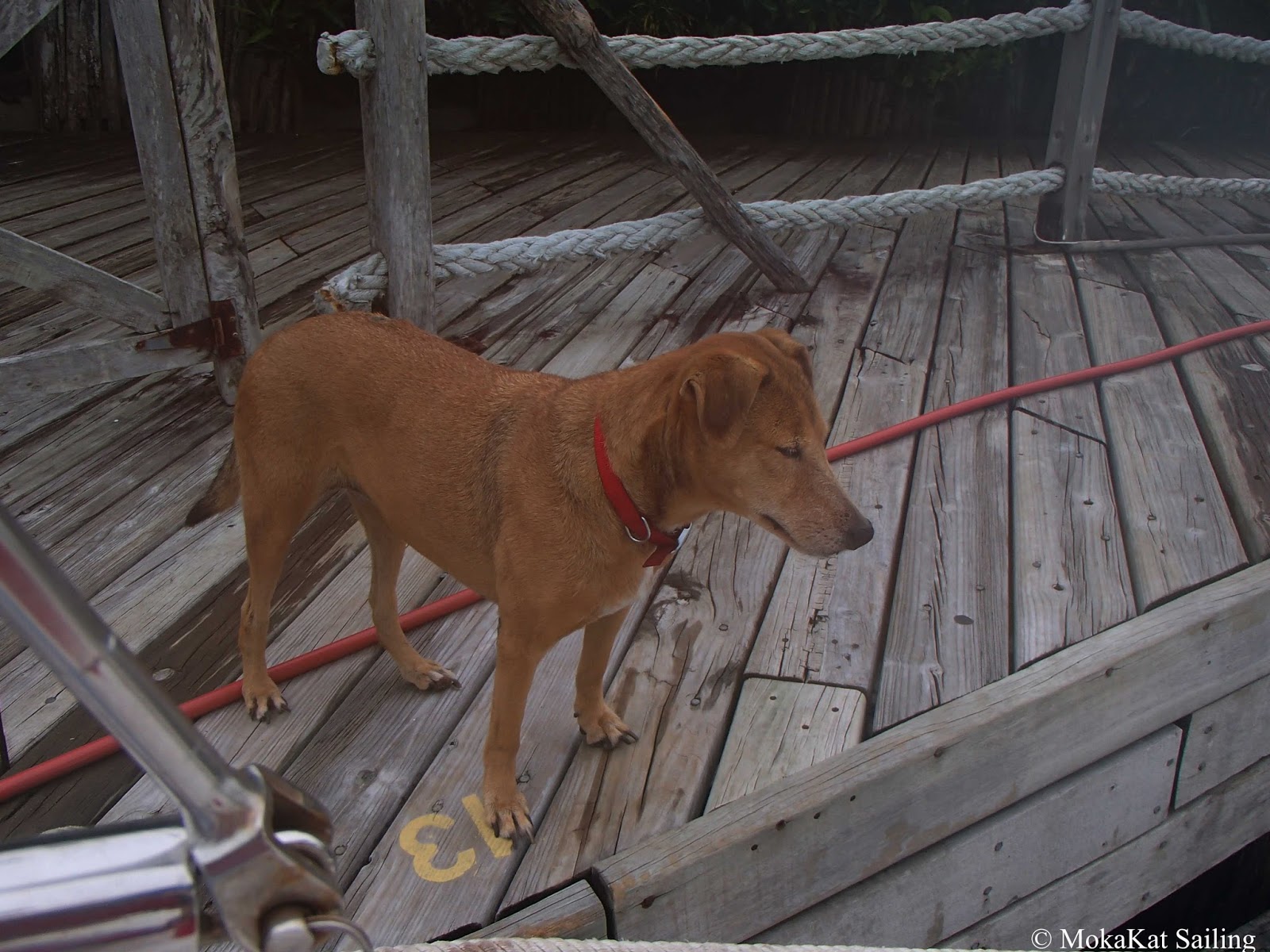 Lady
Mom made friends with an old dog at the marina.  We called her Lady.  She was a stray that the ladies in the museum had been taking care of.  Cliff also took her to the vet and fed her when he was around.  The dog was in rough shape with a large cut on her back, and a large tumor on her jaw.  We fed it some good food and gave her a towel to lay on.  I drew the line on taking the dog with us!﻿
On Monday, the 5th, all of the stores were back open, so the four of us, Brenda, Gene, Mom, and myself, split a taxi to take us to all of the stores that we needed to go.  We called a guy that the marina recommended and we had a deal for $20 per hour.  It would probably take us 4 hours, so each couple would have to pay about $40 each.  So the taxi showed up at 8:00 and we headed out.
We were able to buy our new house batteries at RENCO, and arrange their delivery for later that day.  We also went to Duke Marine, which had many boat things!   Of course we really enjoyed looking at the things, and I picked up a pump to change oil and a new water bucket.  Their prices are very high, but they seemed to have many things that are hard to find in Belize.
We also picked up some motor oil, groceries, rum, and fruits and vegetables.  The other great purchase that we made was a cellular based internet access point called Smart Zoom!  This has been great, as we have fairly fast internet on the boat, as long as we have a good cellular signal.
Once we arrive back at the marina, the taxi driver asked for $160 for the morning! What???  I guess it was the old bait and switch scheme.  We then refused to pay the higher amount and stood there looking at each other for awhile.  I finally offered $100 for the morning, which for me, was more than fair for a fee in Belize.  Everyone agreed on the $100 and the driver left.  He really did a great job today, helping carry our things and watching the car.  It is a shame that we wasn't honest from the beginning.  He actually could have gotten a larger tip and more money, as we were very happy with his help.
So after our stay at the marina we accomplished the following: 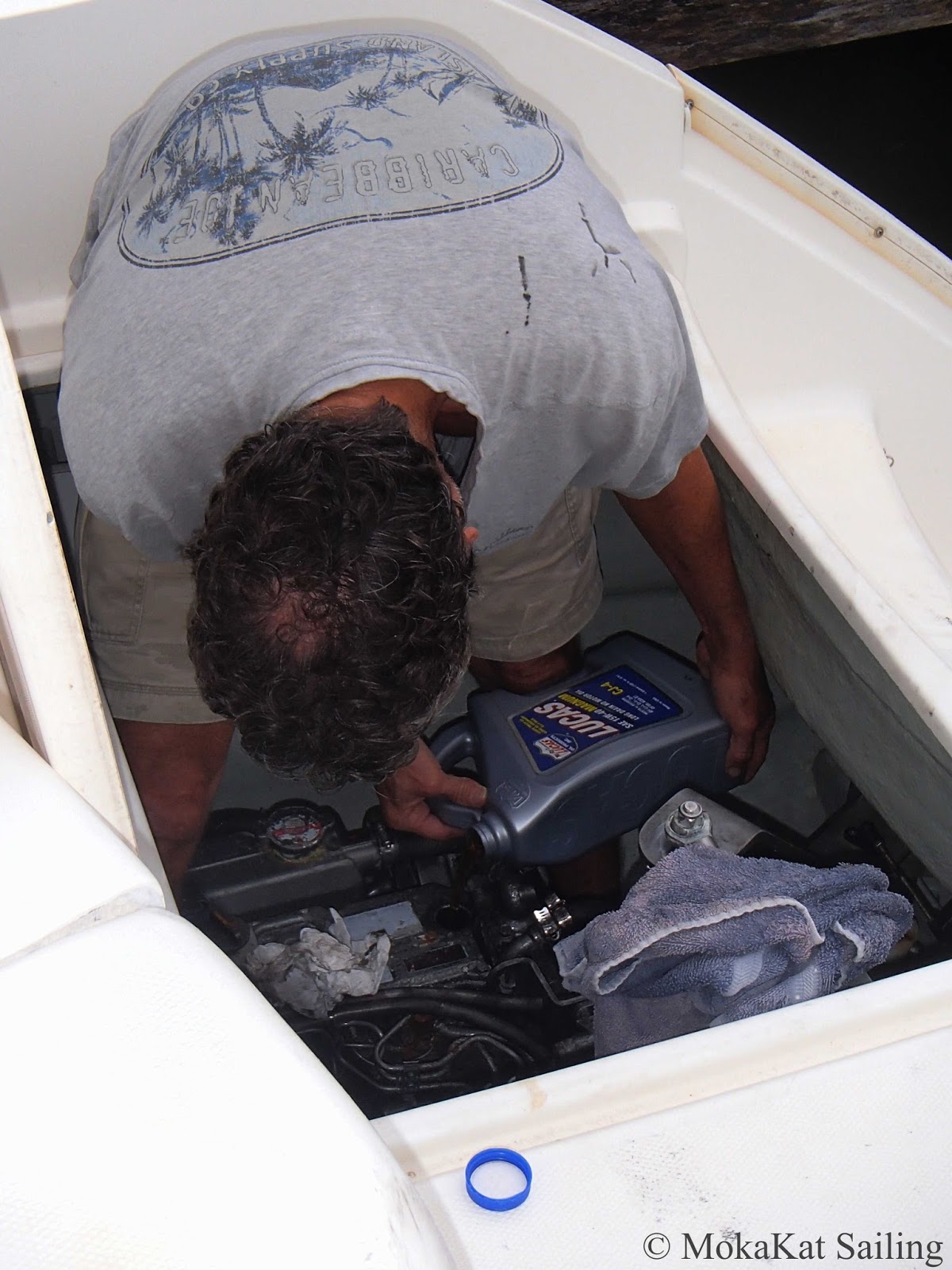 Dale changing oil
We enjoyed our stay at the marina!  Louis, the Marina Manger, was very helpful, and allowed us to stay a couple of extra nights.  He even overlooked our reservation mistake of January 31st, instead of December 31st. I am glad that they had space for us, since our reservation was for a month later!  Oops!!!! 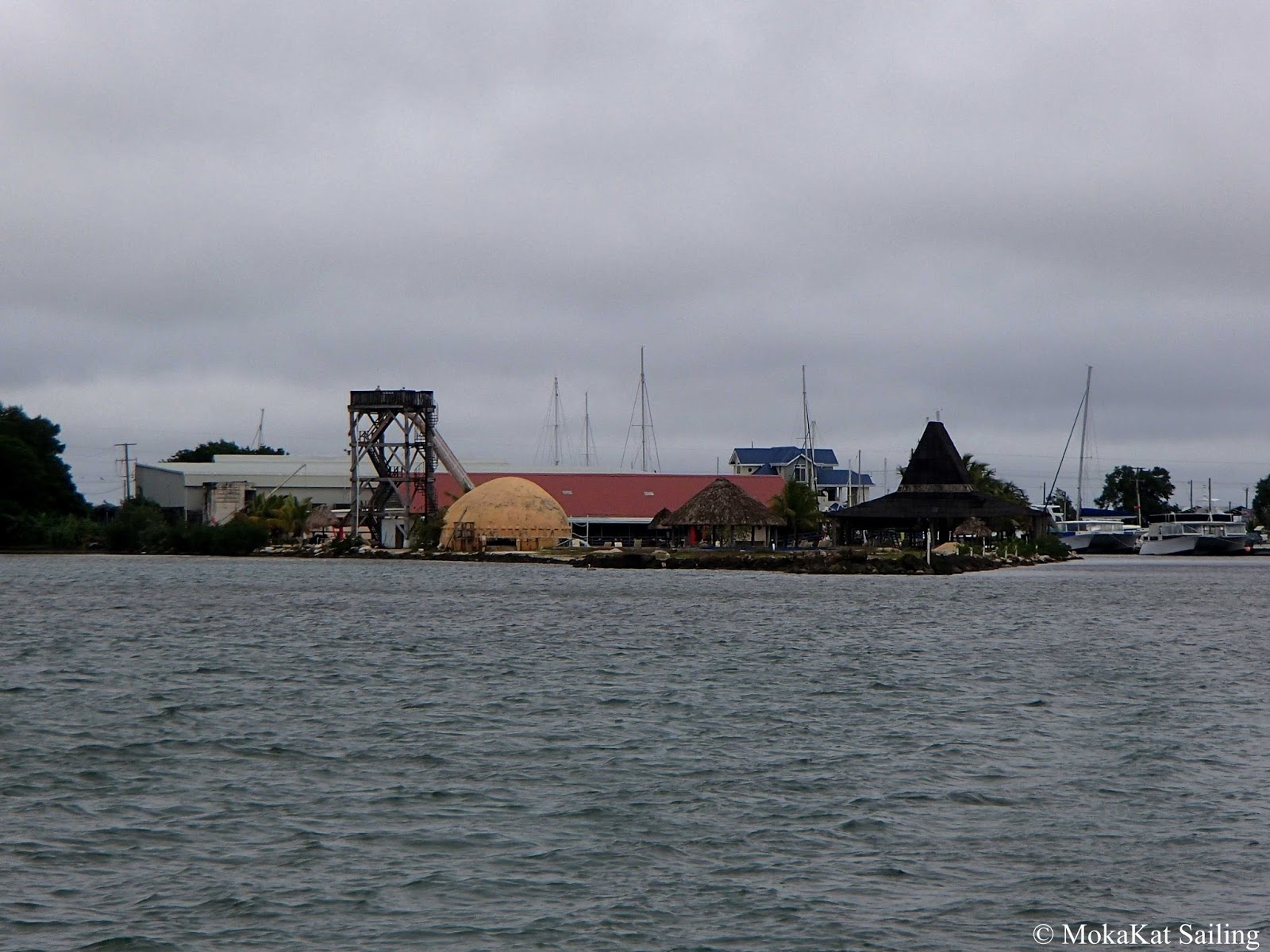