The weather was cloudy again today with strong north winds. The crew was sleeping late, after the long sail yesterday.  The boat was protected, but we needed to find the snorkel spots on the east side of the cay.  There was supposed to be excellent snorkeling about a mile east of the island, so Blake and I set out on the dinghy in search of this place.  The waves were about 3 to 4 feet, so it was hard to see any coral.  We drove around a little, getting pounded by the waves.  We finally anchored a couple of times in the blue water, and jumped in to see what was down there.  Unfortunately, all we saw was sand and grass.

After about two hours of searching and bouncing around, we headed back over to the west side of the cay as there was supposed to be another good spot there, and maybe easier to find.  Once over there, we anchored and snorkeled around a little.  We were disappointed in the coral but we were able to
catch three nice conch. The three conch that we found today
﻿ 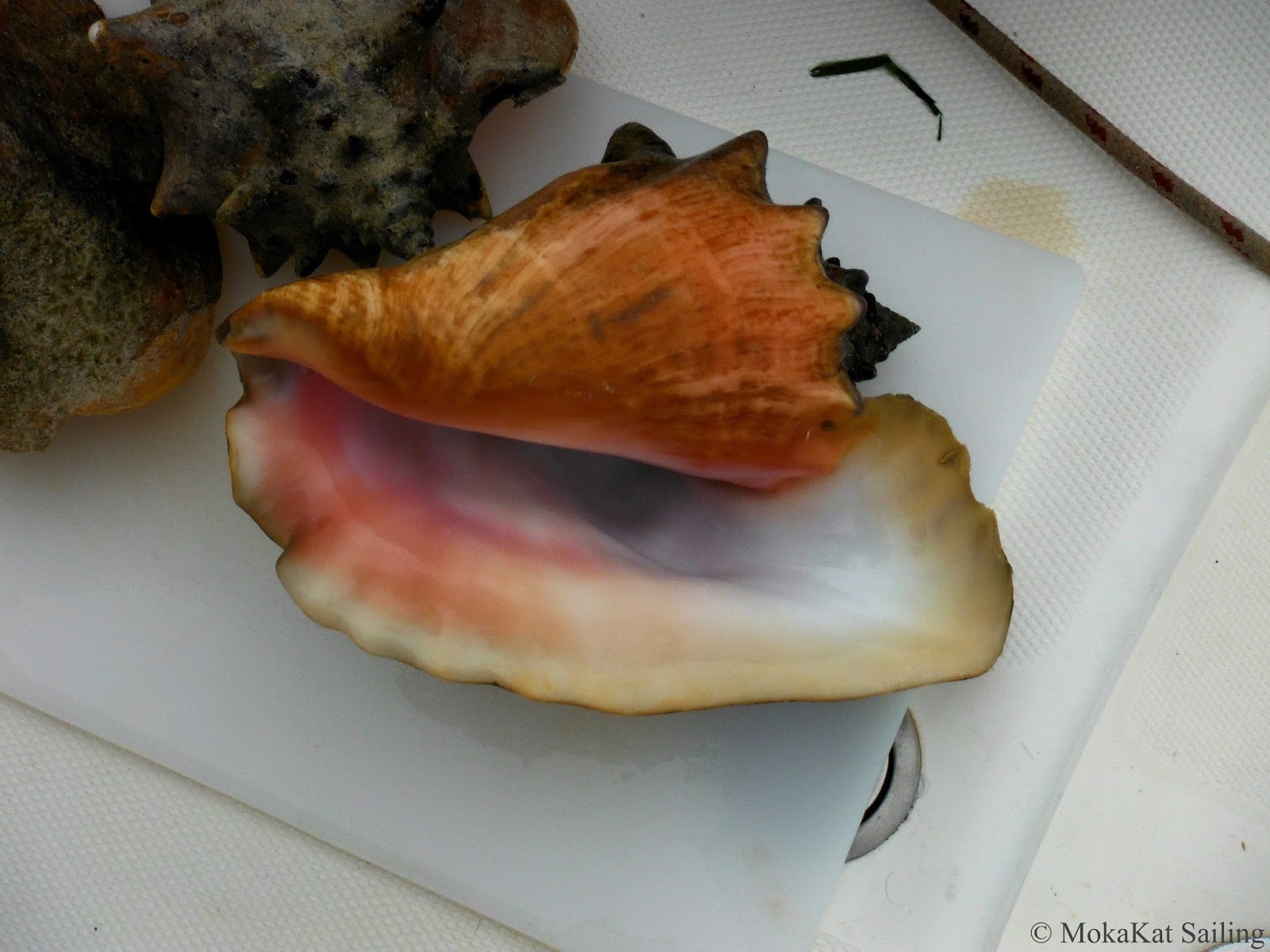 Once back on the boat, I got busy cleaning the conch.  I punched a hole in the third ring from the top of the conch, and was able to pull out the animal.  It is a shame to kill these beautiful animals, but we were wanting to try them, as there are supposed to be excellent to eat.  Once I had the animal out of the shell, I had to figure out what parts to eat and what parts to throw away.  I will spare you the gross looking pictures, but suffice to say that it is a messy job!  At the end, I kept the white firm parts, and threw the rest overboard.  The thee conch gave us quite a lot of meat.

Mom finished skinning and cutting the conch and fried them in a light batter!  They were excellent, and not only did we forget to take any pictures, they were eaten in 10 minutes, with everyone stuffed!  Excellent job mom!!!!  The conch had a real unique flavor and was worth the effort to clean them.

Blake and I played dominoes and watched a movie!  It was my night for the dishes, so while I was washing dishes, Blake was watching the fish and squids play behind the boat.  A couple of large spotted eagle rays came over and swam around the boat for about an hour.  We would shine the flashlight in the water attracting the small fish, and the rays would come by.  They were at least 4 feet across and very beautiful.  They are my favorite marine animal here in Belize.

Blake stayed up to watch another movie and I crashed.  Another good day on MokaKat.
The next morning I got up early this morning, like normal.  I opened the glass doors and check out the boat outside, like I do every day.  I normally look over the boat and make sure that everything is in place.  I noticed that there was something different about the BBQ grill, but I couldn't figure it out.  I walked over closer to look, and was about to touch the brown rubber strap under the grill, when I realized that it was actually a snake!  It ended up being a small boa.  After Blake got up, we gently nudged back into the water, and it swam off.  That was a first for MokaKat!  I am glad that it liked the BBQ grill, and not my open hatch, just below!  That would have been a surprise! 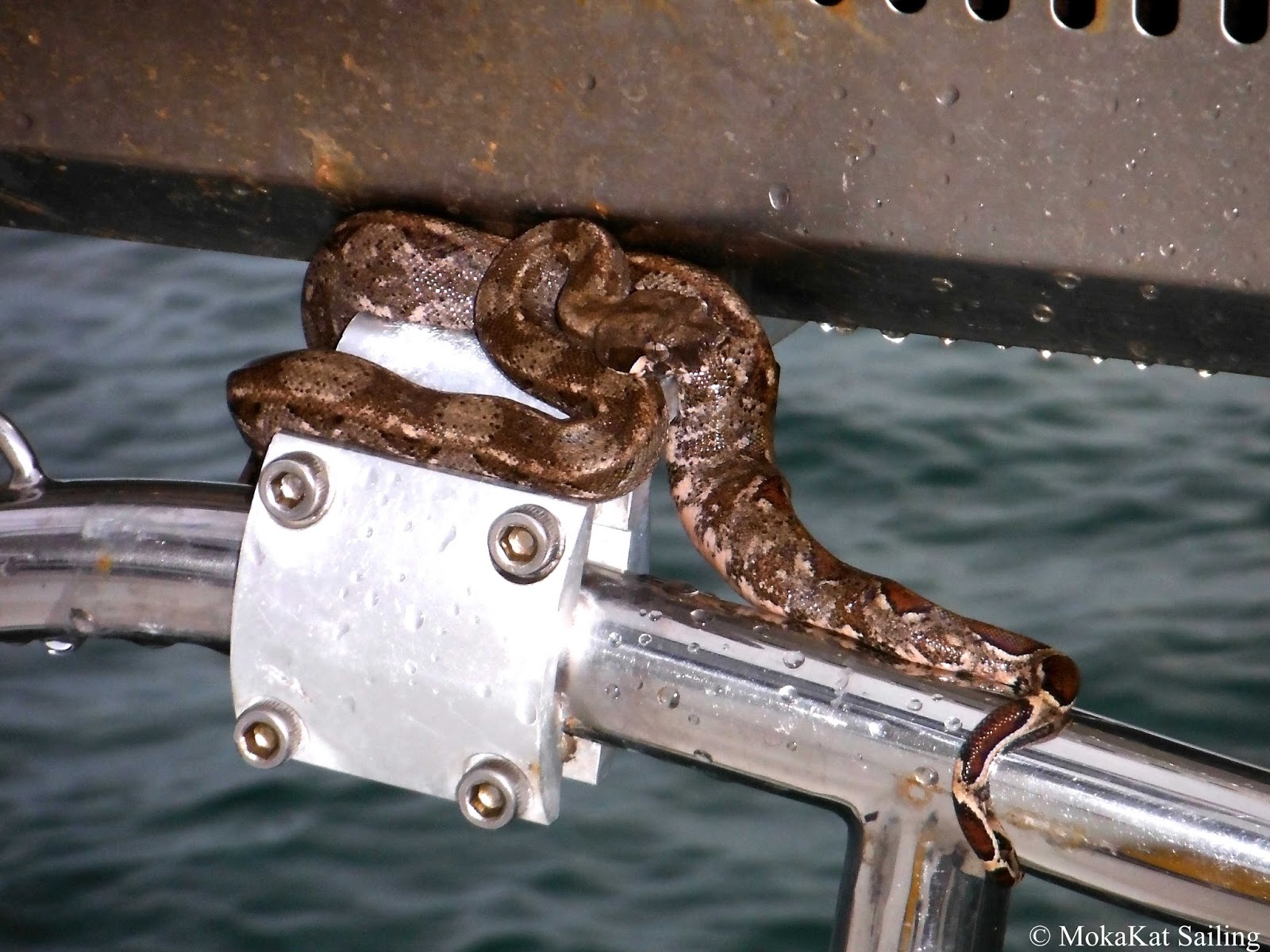 Our visitor during the night!
﻿ 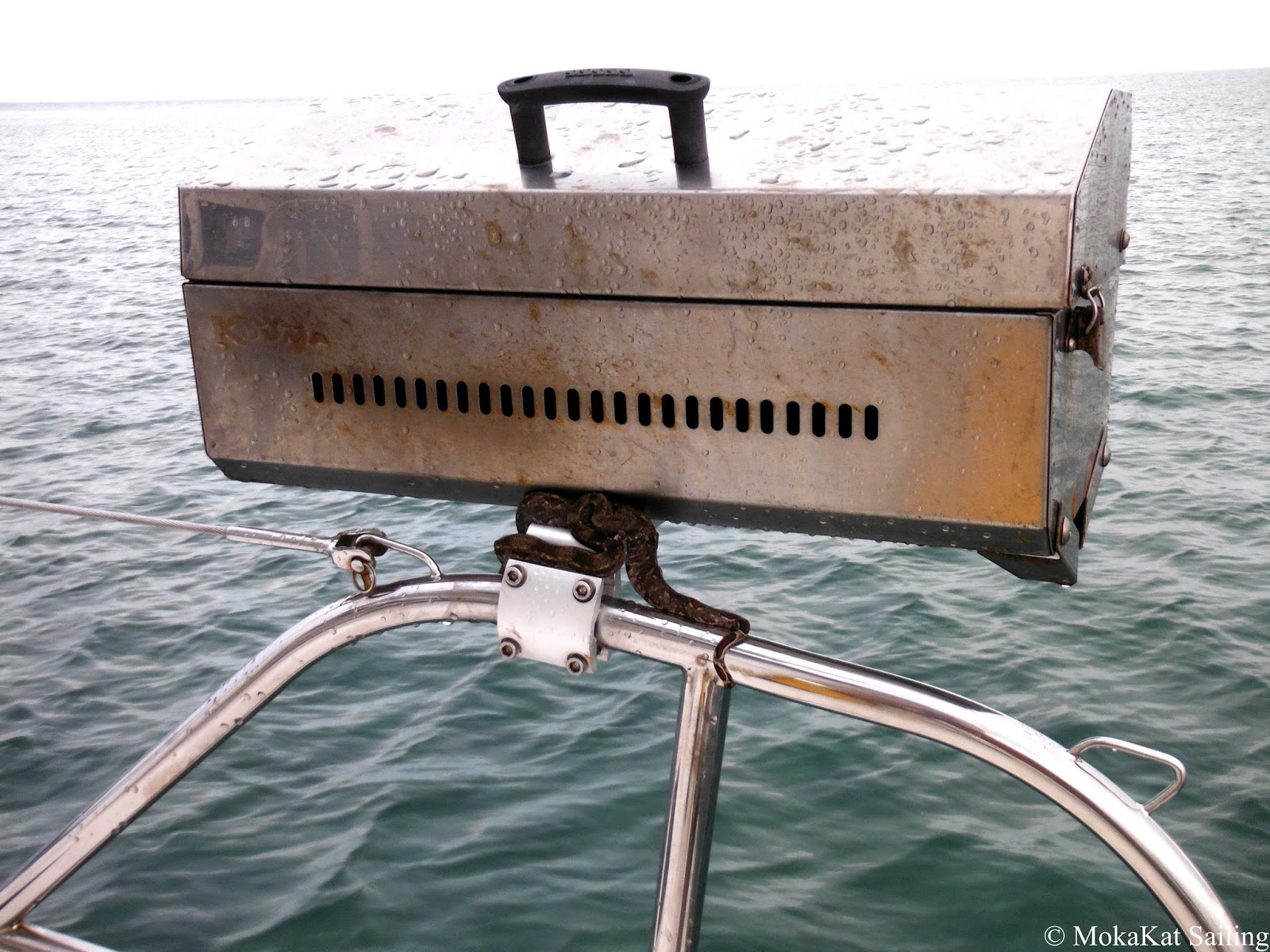 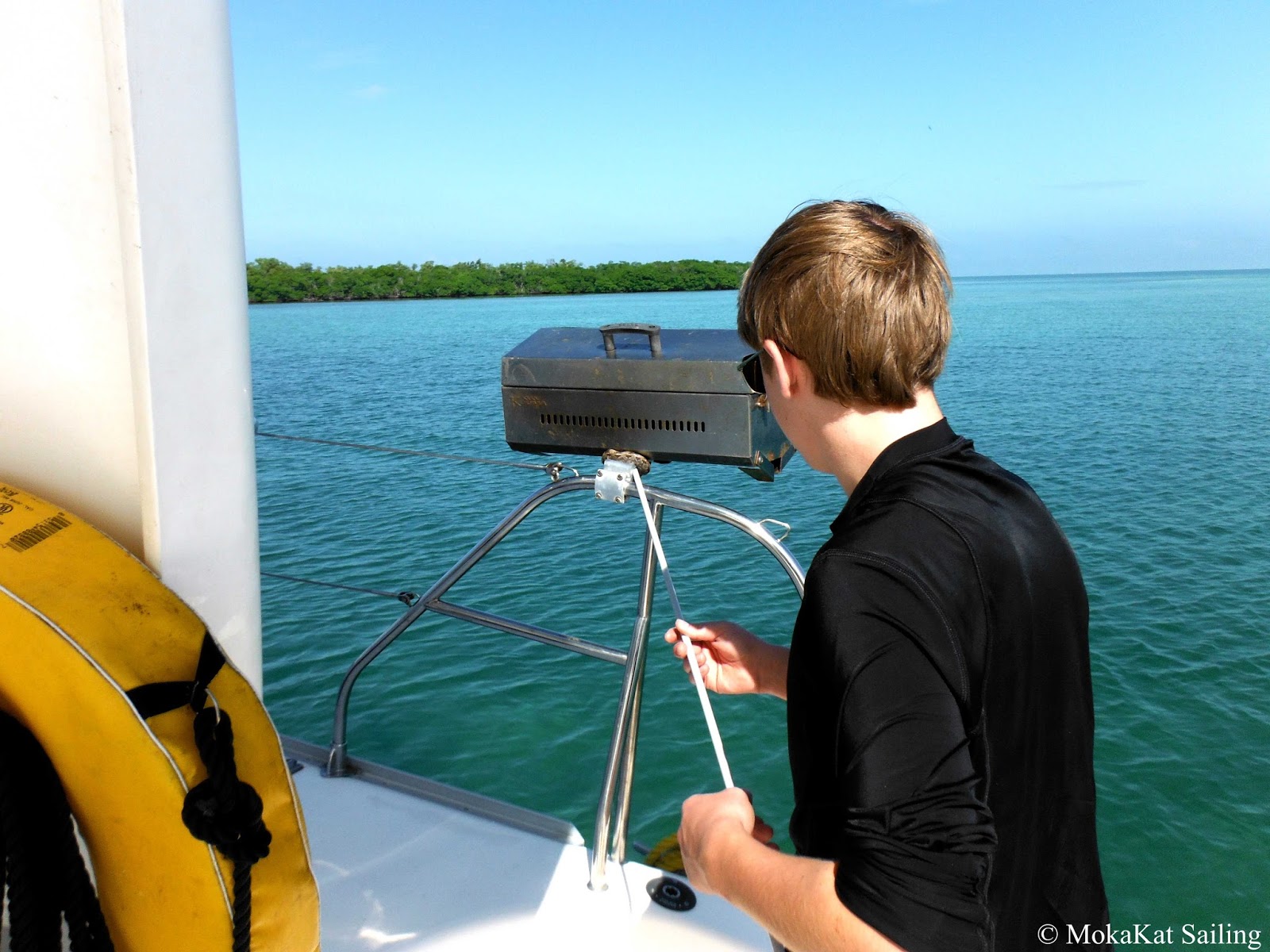 Blake carefully helps the boa off of the grill 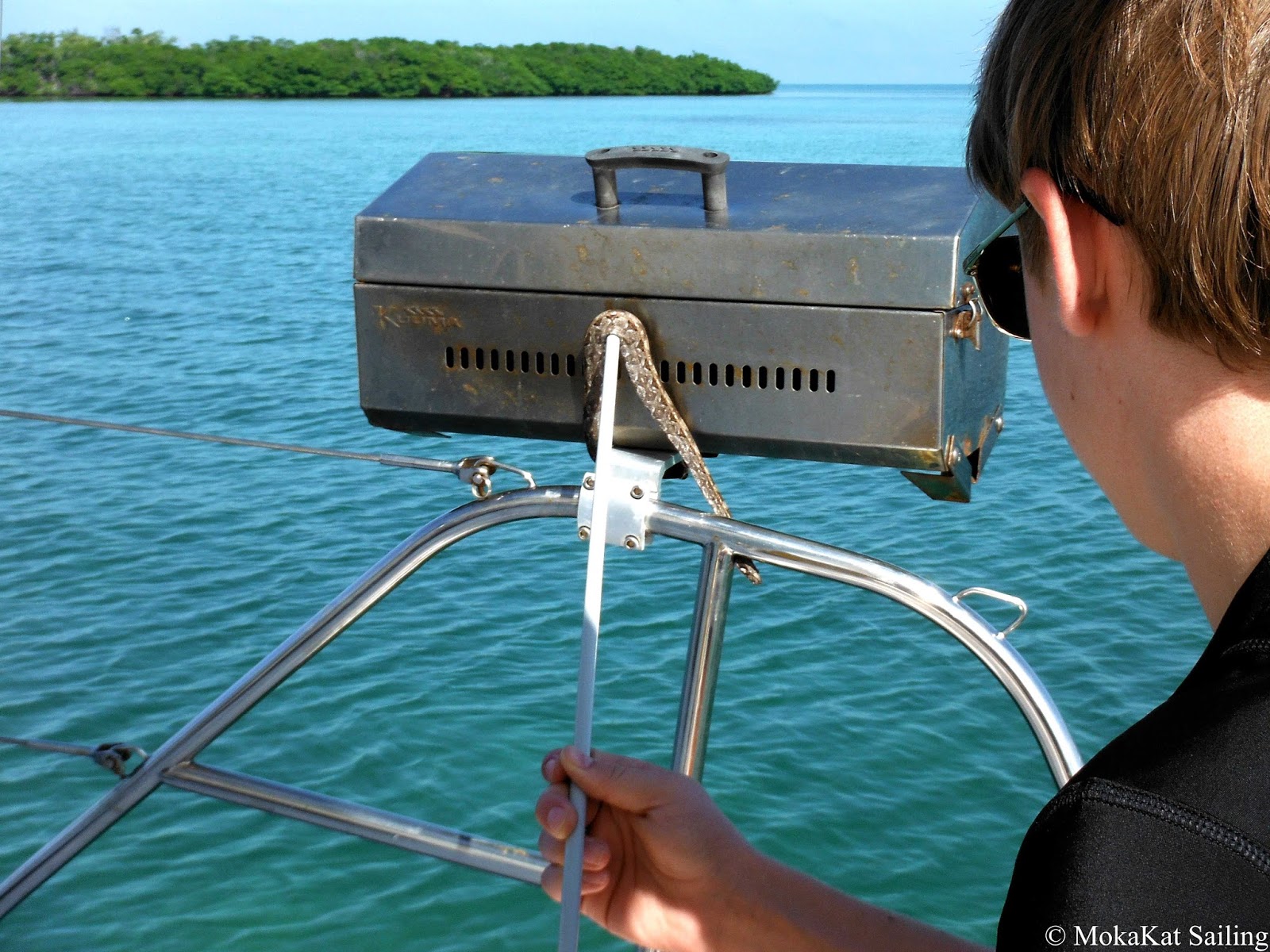 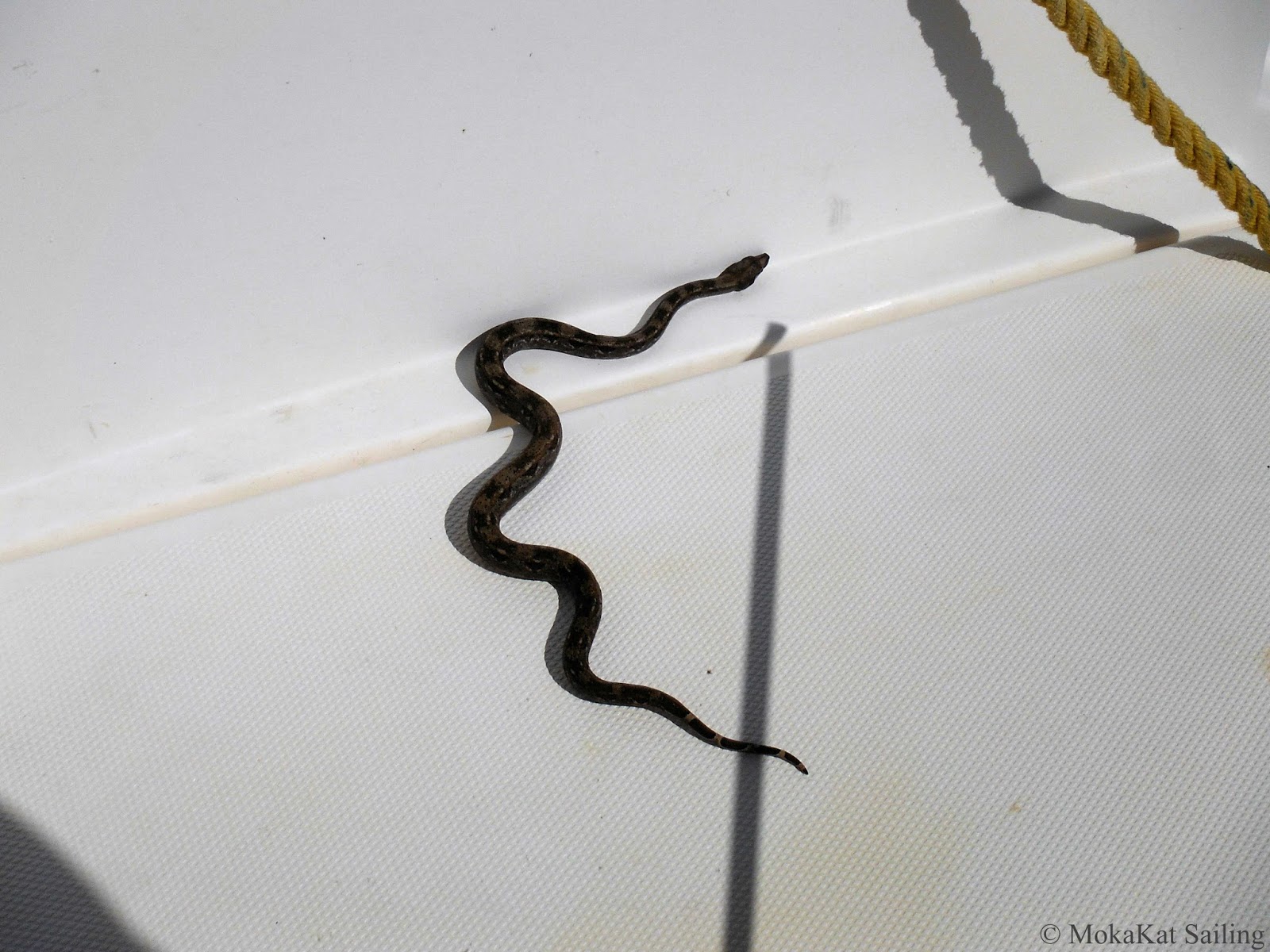 The boa slithered off of the BBQ grill and into the water, swimming away!

Since the water was so calm today, we decided to take the catamaran to the east side of Colson Cays and search for the great snorkeling spot.  It turned out to be really easy, as we could easily saw the shallow water and reefs.  We anchored MokaKat just off of the reefs and took the dinghy over closer.  The snorkeling was excellent with many reefs, shallow water, white sand, and lots of fish!  Mom spied a couple of lobsters, so the hunt was on!  Blake finally snagged his first ever lobster (after chasing it around for a while), and I managed to grab one too!

We enjoyed the snorkeling for a couple hours and we returned back to the boat very tired!  We will have to remember this spot, as it has been one of the best snorkeling spots that we have been on and we only explored about half of it.  Sorry, no pictures were taken as we were in lobster hunt mode!

We planned on sailing over to Water Cay, about 10 NM away, to spend the night, so we ended up motor sailing all of the way, due to light winds.
Mom cooked the freshly caught lobster, along with some others that we bought back in Cay Caulker, and we ate lunch as we headed to Water Cay.  It was really good!  Blake seemed happy to catch his own lunch today! 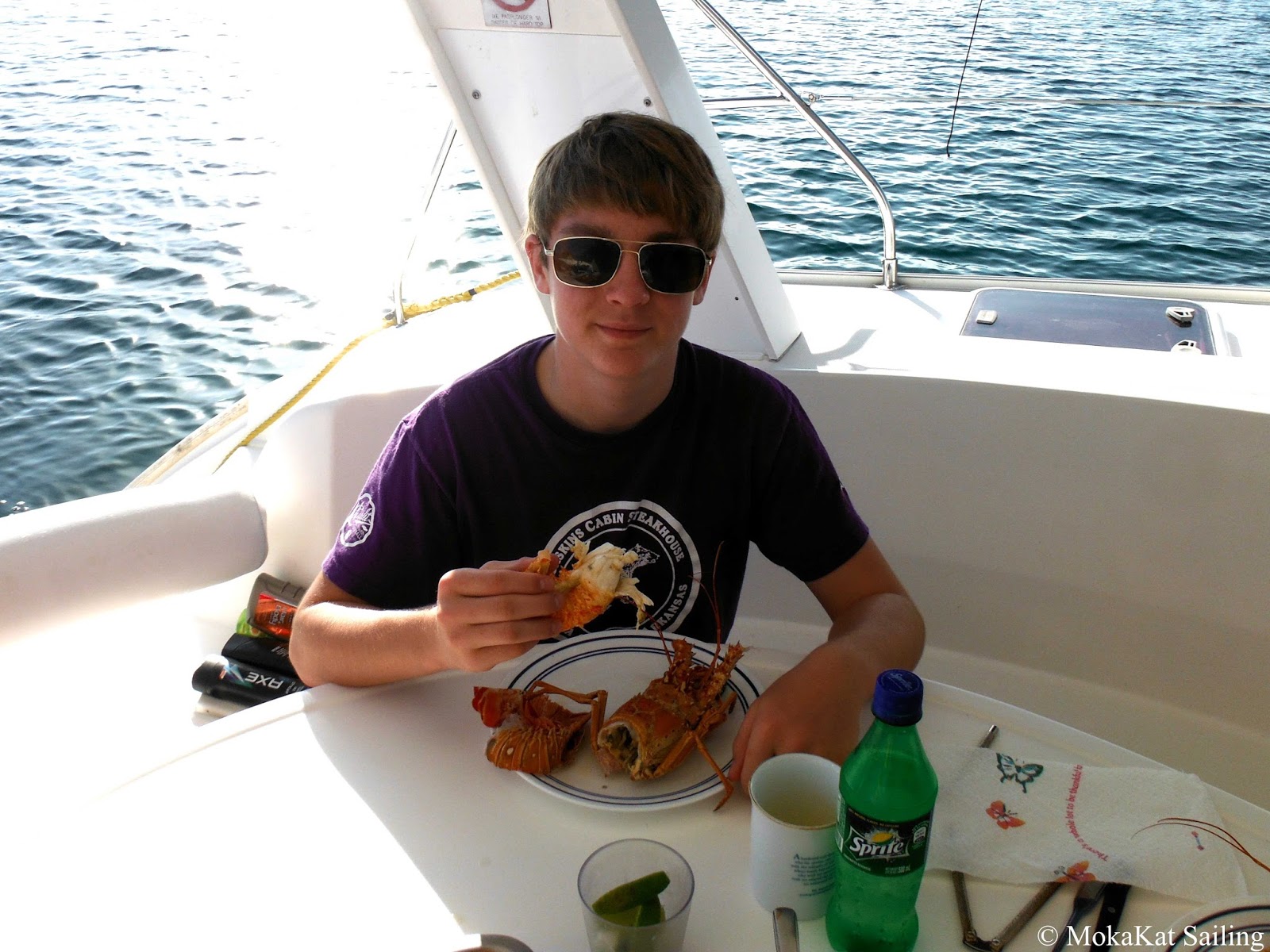 Blake eating the lobster that he just caught! 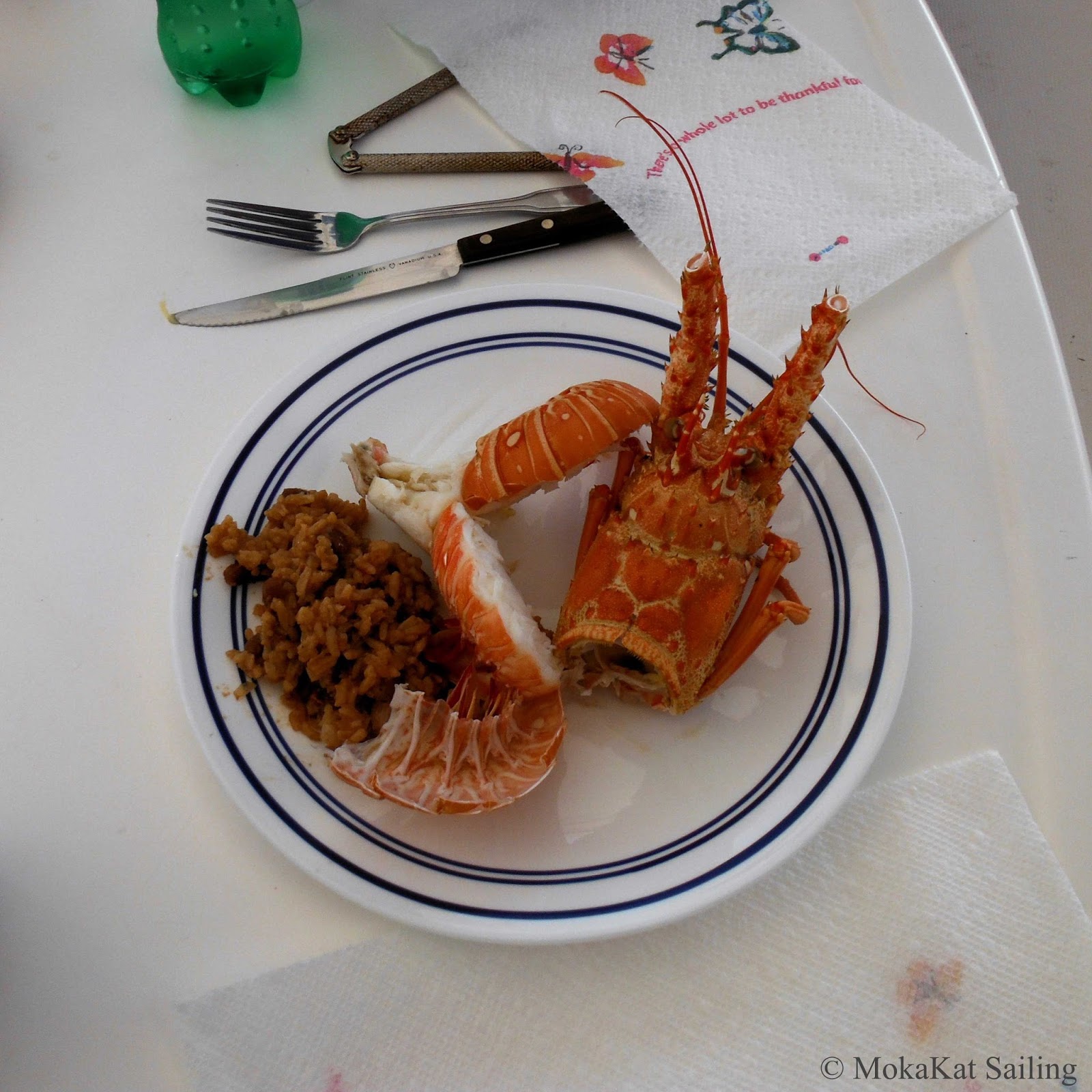 As we were rounding Alligator Cay, the fishing reel started singing!  Fish on!  I slowed down the boat, and Blake went to fight the fish.  After a good fight, Blake landed a nice barracuda!  Since we still had fish in the freezer, we decided to release it!  Good job Blake!!!! 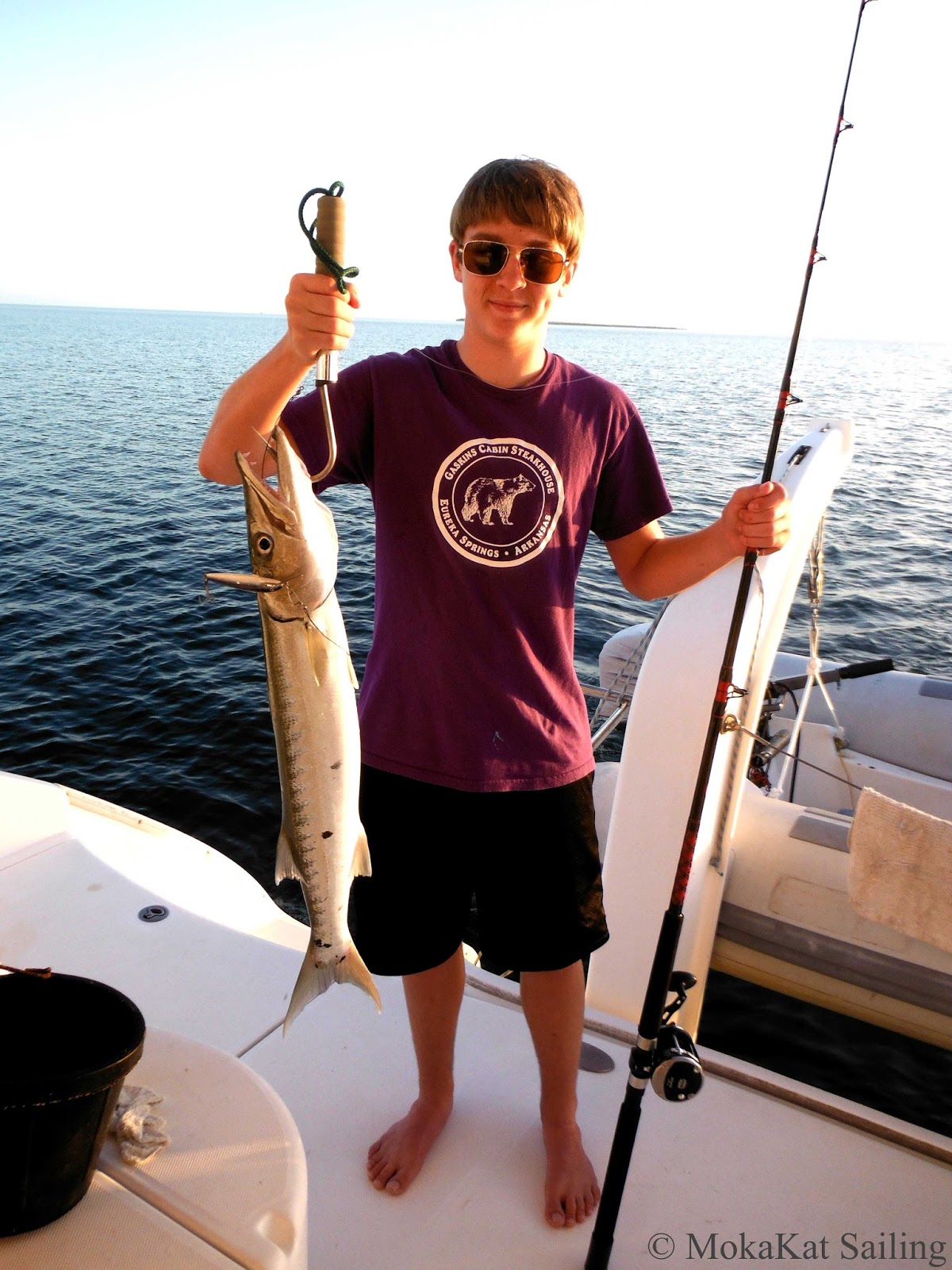 Nice barracuda!  This so far is the boat record for size! 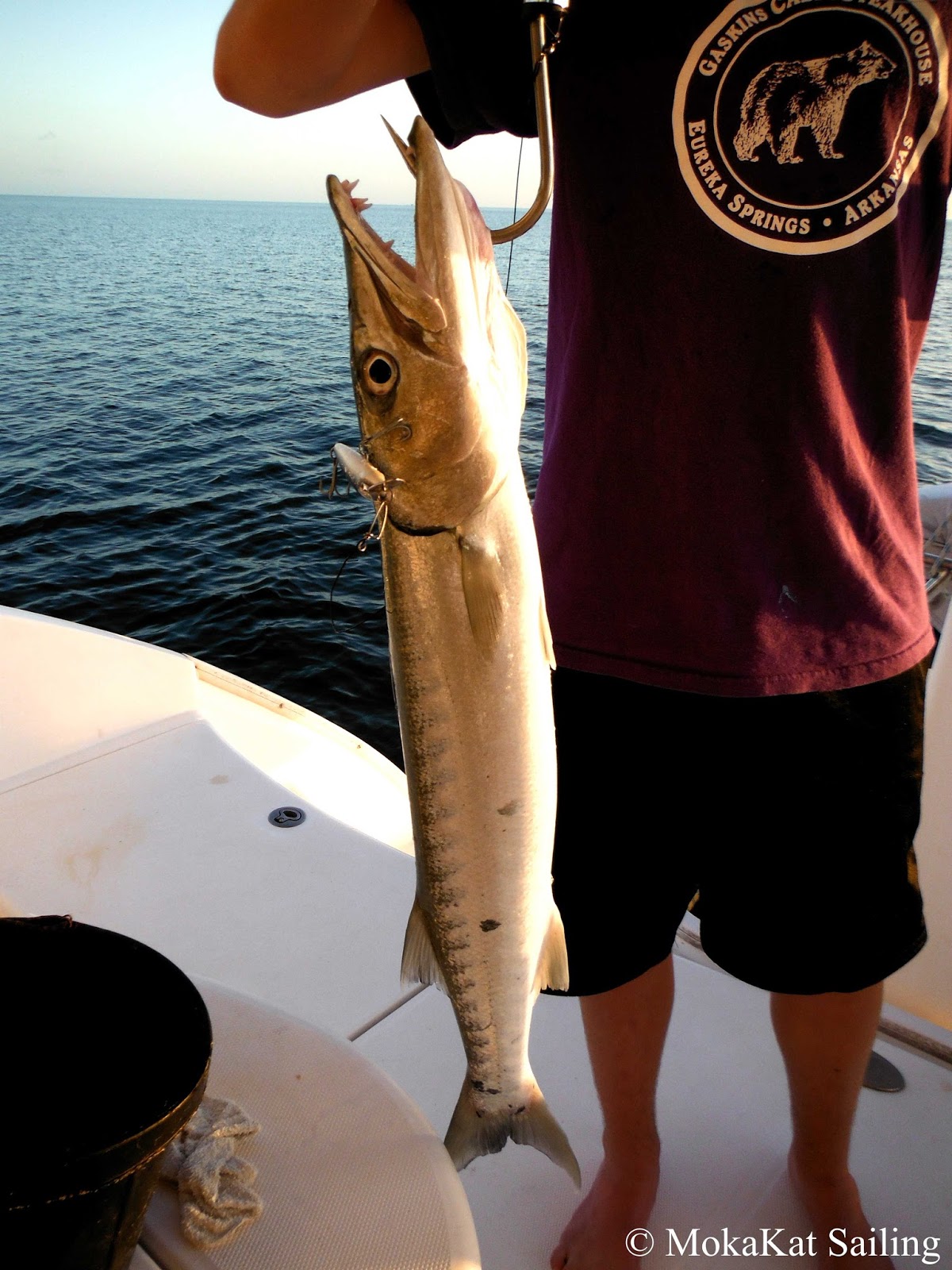 After an hour or so, we hooked another fish.  This one seemed to be really large, as it took out a lot of line before we could slow the boat down.  Blake's worked hard trying to get the fish close to the boat.  It ran under the boat a few times and stayed deep.  Finally he got the fish to the boat, and it was a 5 pound snapper that was hooked close to the gills!  We were surprised it wasn't a huge fish, but happy it was a snapper.  Another fish for the grill!, as we always keep snappers! 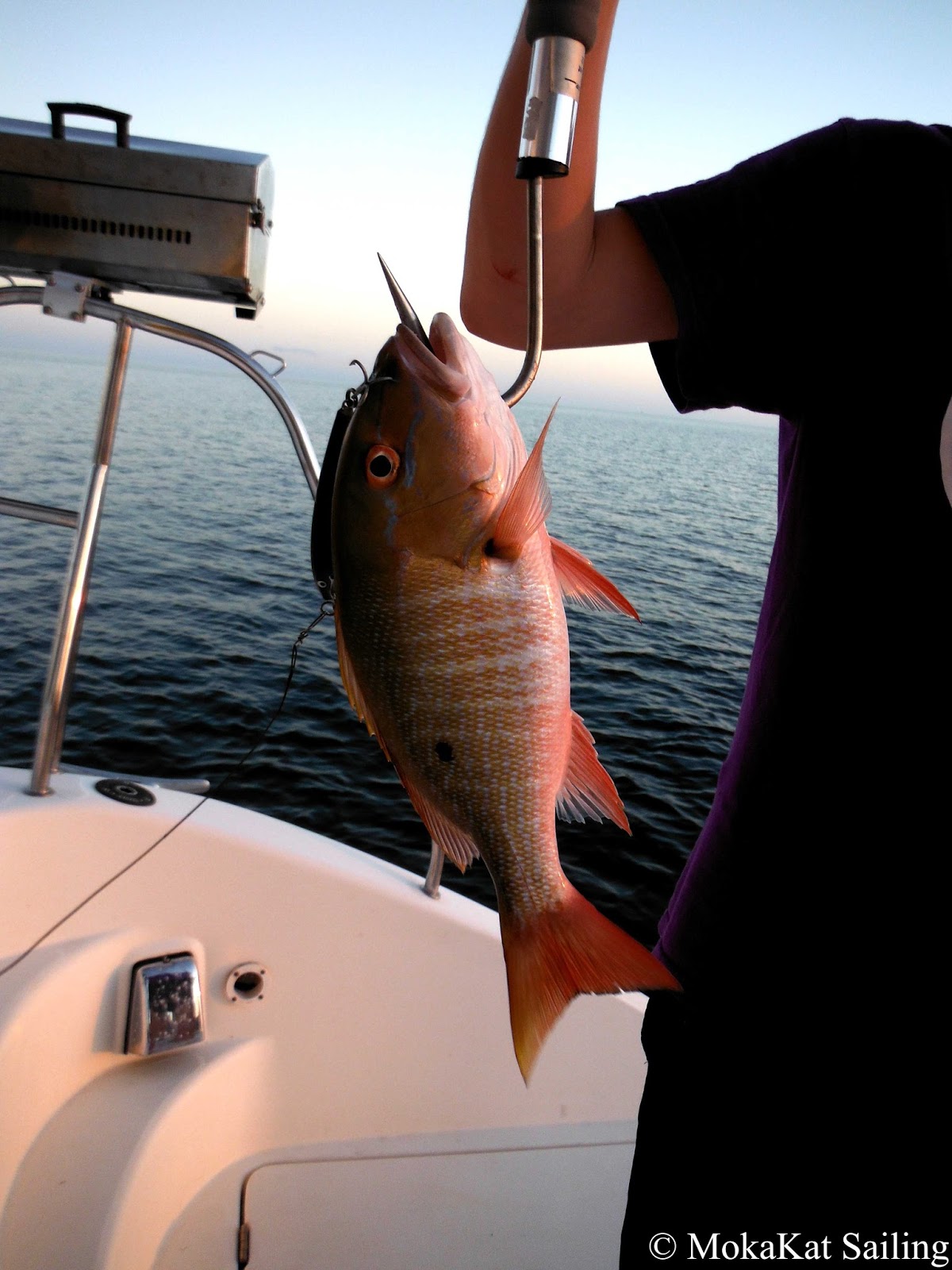 Another nice snapper!
Once we arrived and anchored at Water Cay, I started to clean the snapper.  Since it was a really dark night, Blake was holding a light for me, as I cleaned the fish.  We then heard a voice about five feet from the back of the boat, saying 'good evening'! I probably jumped a foot, as we were anchored a long way from the island.  There was a guy paddling up to MokaKatt in a fishing dory.  He apologized for scaring me, and we talked for a while.  He lives alone on the island, and I am sure, was a little lonely.  He wanted to trade some fish for some rum.  Since we were good on fish, I gave him a bottle of rum that Phil and Julie gave us back last fall.  He was very happy and stayed around and talked to us for awhile.  I believe his name was Glen.  We always have enjoyed talking to the locals in Belize.

Since we ate a very late lunch, and we were exhausted, we crashed early with a few snacks.  Blake stayed up and watched a movie on the laptop.
Another excellent day on MokaKat!
Posted by Unknown at 12:33 PM