The anchorage was still very rough in Cay Caulker this morning.  Several of the other catamarans pulled up anchor and headed north to San Pedro, where the anchorage would be calmer in the north winds.
Our plans were to sail to the Colson Cays, but it was about 40 NM, a long way for us, especially getting a late start.  The crew was hard to get moving this morning after several days of activities.  Simon, from TMM, told us there was an excellent snorkeling spot about a mile east.  If we couldn't get to the Colson Cays by 4:00, we couldn't go through the pass to get on the south east side, and protected water.  Our backup plan was to anchor at Water Cay.
We pulled up the sails with a reef in the main, and headed down south.  The wind was at 10 to 15 knots from the north west was perfect for a nice broad reach. 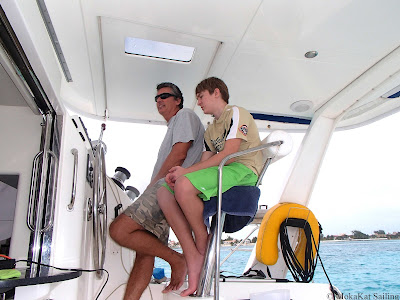 Dale and Blake piloting the boat 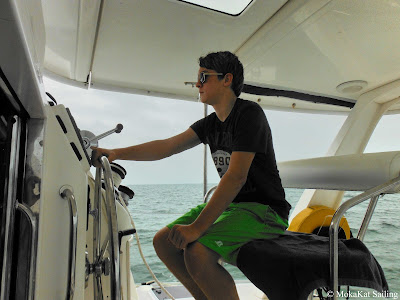 Blake takes his turn at being captain

As we came to Porto Stuck, we decided to sail through and not drop the sails, since we had our track files from our previous trip.  This turned out to be a good decision as we sailed right through without losing any time to lowing and raising sails.  We also did the same thing as we passed through Swallow Cay.  While we were in the middle of the Swallow Cay pass, we had several water taxis and a large power boat squeezing through at the same time.  All we could do is hold our course and stay in the deeper water, as the much faster boats passed us, some coming and some going.  We were only running about 3 knot, and the faster power boats flew by, throwing a large wake.

After the pass, Blake and I shook out the reef in the main sail, as we were we now in open water.  Shortly after that, Blake caught another one of those ugly fish.  Another ugly picture, and it went back into the water!  We had high hopes for fishing, but so far nothing good! 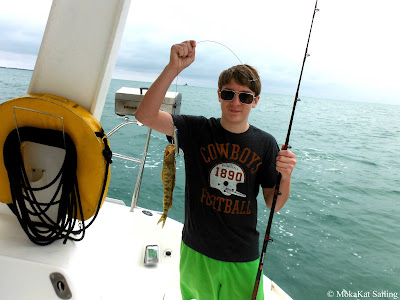 A proud picture of an ugly fish!!!

The wind kicked up to around 15 knots, and we were hitting 7 and 8 knots!  Our highest speed of the day was 8.4 knots, but we held 8 knots for most of the day.  At this pace, we may make the Colson Cays.
As we neared the ship channel, the fishing reel started to sing!!!  Fish on!!!  This was a much larger fish, as Blake struggled to get control.  The line was stripping off pretty fast, so I put the boat into the wind and dropped the jib.  It was a good 10 minute fight, but finally Blake pulled in a 10 pound snapper!  Excellent job Blake!!! 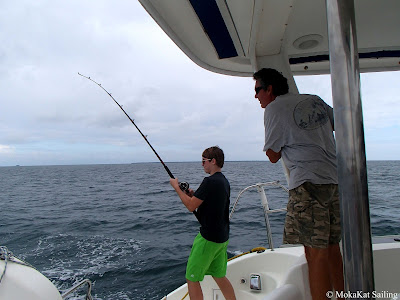 Blake fighting a large fish with Dale looking on 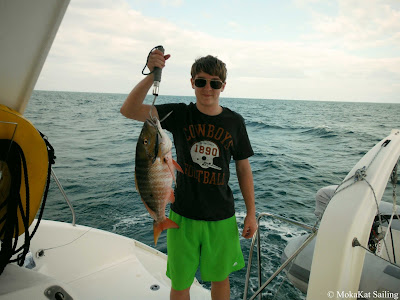 As we were sailing, Blake and Mom played dominoes as I watched the helm!  Even in 15 knots of wind the catamaran was smooth enough to play dominoes! 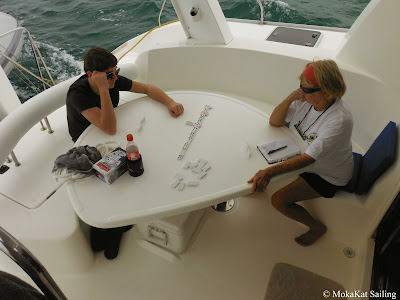 With the 8 knot speed that we were getting, it looks like we would arrive at Colson Cays about 4:00 PM.  The problem was that we need to go through the shallow cut to get to the backside of the cay, and protected water.  We had our track files from when we went through before, so even though the light was fading, we felt confident enough to go through the cut in low light.  With Blake and Mom on the front of the boat, we slowly made our way through the cut and to the back side of the cay!  Calm water for a change!
We were not the only ones looking for calm water, as a local fisherman anchored his boat next to us.  We have a lot of respect for those guys, working hard all day and roughing it on their simple boats.  They had no lights and usually sleep out in the open in their boats. 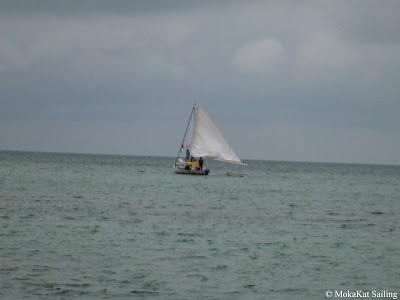 Once anchored,  Blake and I filleted the snapper.  Mom then cooked it and we had a great meal of fresh fish!  After dinner, Blake and I watched all of the little fish come up behind the boat to the light.  There was also some jelly fish or something that would glow bright, about the size of a plate.  We could also stir up the water and the water would glow with bio-luminous animals.  We could stand on the hardtop, and see glowing spots all around the boat.  The night was dark and the stars were bright, without any of the normal light pollution from civilization.  I enjoy being out on the cays and the solitude of nature.  It was nice to be able to share this with Blake.  After a little while, there was a squid that started coming up to the back of the boat.  He was eating the smaller fish and having a good time.  Blake tried to catch it in our water bucket, but with no luck.  Blake stayed up and watched a movie, but I crashed!
It was probably our best sailing day on MokaKat, traveling 42 NM and a speed record of 8.4 knots.
Happy sailing from MokaKat!