Christmas on MokaKat and Blake's Arrival!

Christmas on MokaKat was pretty quiet.  This has been a strange Christmas, as my wife had a conflict with her US citizenship exam, so she was unable to come, and Blake missed his earlier flight because of an ice storm!  Blake was flying in today by himself, which can be a challenge for a 13 year old, although he did great!  Also, there is concern about a minor flying alone, so I would need to pick him up at the airport, once he arrive in Belize. 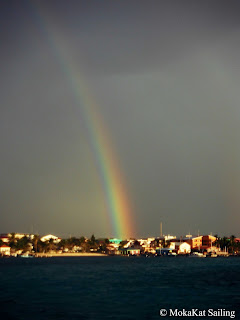 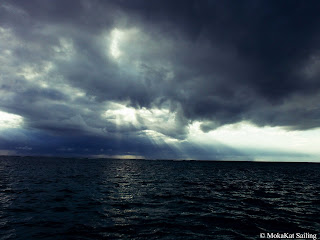 Christmas morning sunrise at San Pedro, Ambergris Cay, Belize
To pick up Blake, I took the dinghy into the TMM dock and locked it up.  I then walked the two blocks to the airport, everything is so convenient on the cays!  I then caught a 3:00 flight to the International Airport in Belize City on Maya Island Air.  I think that it was a 15 minute flight, but we had to stop at the municipal airport in Belize City, I love these little planes! 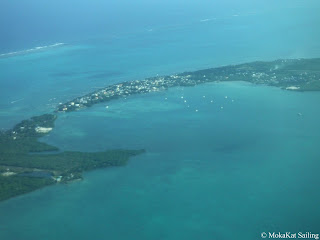 Picture of Cay Caulker Harbor from Maya Island Air
I arrived at the International airport, just as Blake's plan landed.  I notified the United counter that I was picking up a minor, flying alone.  She told me to wait and they would find him and allow me to be with him through immigrations.  After about 20 minutes, the lady said that she couldn't find him, but she was sure that he would come out shortly.  Well, I was starting to get a little worried, but I was waiting by the exit of the customs, so he would have to come out this door to exit the airport.  After another 20 minutes, a United guy come over and asked if I was waiting for Blake.  I said yes, and he told me that it was not possible that Blake enter into Belize alone and I would need to meet with the Immigration officials with Blake.  It turns out that Blake tried to make it through Immigrations and the officer was a little blunt about it not being legal.  I then was ushered over to Blake, and we met with the officer and he asked a few questions and stamped Blake's passport.  Blake wasn't too amused with all of the hassle! 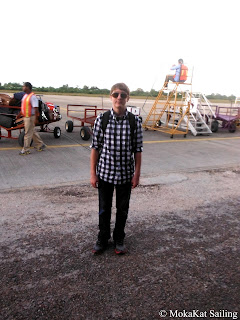 Blake, International Traveler..again!!!
We then caught the next Maya Island Air flight to San Pedro!  This was the first time that Blake was in a small plane, and he loved it!  We flew low over the islands, and made it to San Pedro in 16 minutes!  Blake was thinking taxi, as we walked out of the airport, but we walked a couple blocks to the beach, and then over to the dinghy.  Luckily, the waves were not too rough, as we headed over to MokaKat.
Welcome to MokaKat, Blake!!!!
Mom cooked and had ready an excellent Christmas dinner of smothered pork chops!  Blake was so tired that he ate his dinner and fell asleep in the saloon.  He had been up since 4:00 am and was exhausted!
Merry Christmas from MokaKat!
Posted by Unknown at 8:56 AM