We had a quiet night and started the morning early.  Phil was coming over by Llide's boat to bring all of his suitcases and things from the house!  He showed up around 8:00 or so, dodging a small rain shower that move off to the west.  We stowed their things in their stateroom, and finished breakfast. 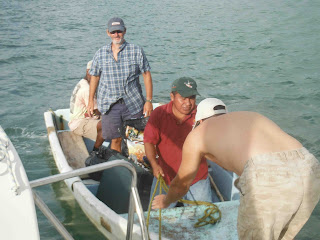 We then ran over to their house by dinghy, crossing the shallow bay with care.  It turns out that they have been living in a small fishing resort call Stepping Stones with a nice dock.  They gave us the tour and we were amazed that they have been living off of the grid for 9 months!  They have solar panels and a generator for power.  They collect rain water in several large containers for drinking and cleaning.  They also have a couple dogs and chickens.

The night before we arrived, a large boa constrictor got into the chicken coop, and swallowed one of the chickens.  The problem for the snake, was that with the chicken swallowed, he could no longer squeeze out of the coop, so he was trapped inside.  Llide came over and caught the snake, letting it go further in the jungle.  It was at least 7 feet long!  I hope to get some pictures from Phil of the snake.

They really have done a lot of work to get the resort back livable again!  It was a working fishing resort for 7 years, but when Phil and Julie took over, it was almost uninhabitable.  Everything had fresh paint, and all of the rotten floor board had been replaced!  We sat on the screen porch and talked, while the waves crashed not 50 feet away.  It was nice just to sit and listen to the ocean waves, without any cares, at least for an hour or so. 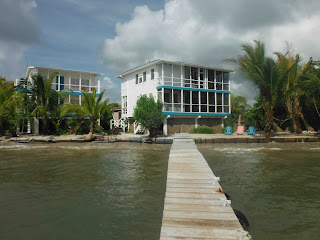 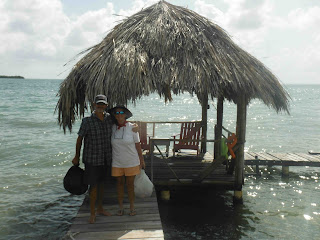 Phil and Augie on the Stepping Stones Dock Cabana 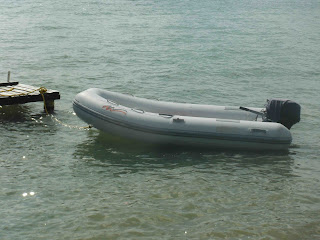 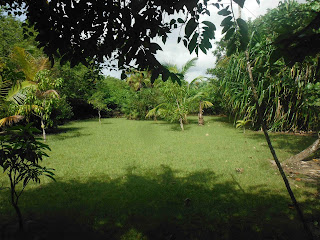 Back yard of Stepping Stones.  The jungle is just past the cut grass. 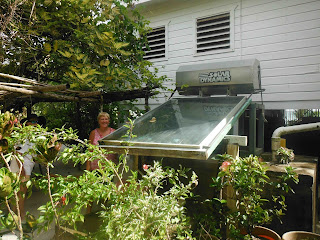 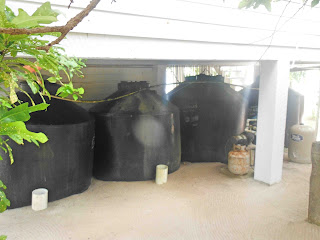 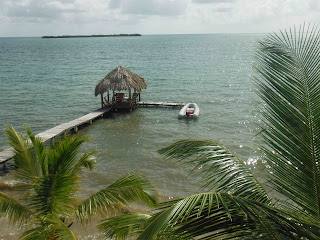 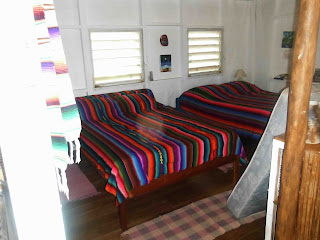 One of the cabanas available to rent 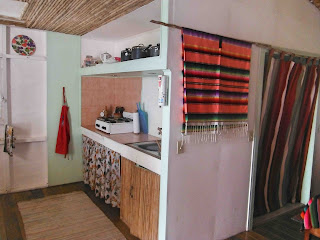 Kitchen of the cabanas 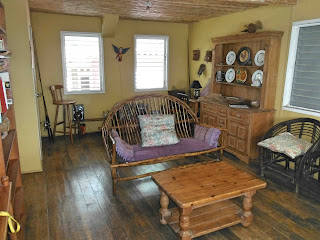 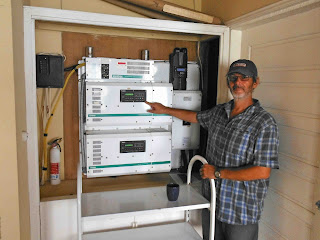 Phil showing solar panel controllers.  The solar panels are their only source of electricity.  They do have a generator, but only used it a few times in 9 months. 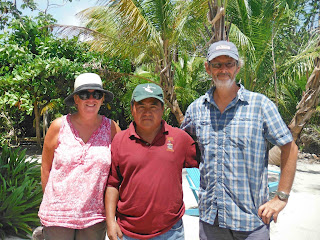 Julie and Phil with the local handy man 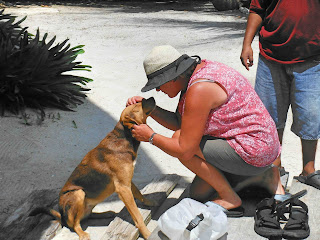 A sad good bye
Around lunch, we headed over to the boat, Phil and Julie saying good bye to their friends and the dogs.  We joked that the dogs sat in the pier waiting for them to return for several days!
That afternoon we swam around the boat, and scrubbed the bottom of the boat, getting ready for our trip to Guatemala in the next couple of days.  Julie cooked an amazing rice and chicken curry, with lime pie for desert!  For some reason she cut the pie in 5 pieces, so we were wondering who might drop in for desert.  After no one came, we cut the remaining piece into parts, finishing the pie with no left overs!   We watched the stars and crashed hard for the night.  We have a long trip ahead in the next few days. 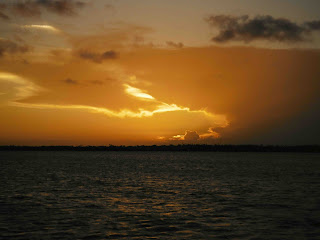 Another beautiful Belize Sunset
Posted by Unknown at 2:28 PM