Our first weekend here was really crazy!  Over across the cove there is two fuel stations and a new marina call Ram Marina.  The weekend craziness started on Friday afternoon and went through most of the day on Sunday!  There were many large power boats coming and going all weekend, with many people, music, and waves!  I guess there is no such thing as a no wake zone in Rio Dulce, as large boats were speeding in and out of the marina!  Why a large boat, 40 to 50 feet, have to run fast through the anchorage, I don't understand.  Especially with kids on jetskis and smaller boats zipping around.  Obviously we are not in Beaver Lake any longer!
At the time we were on a slip on the outside of our marina, getting a great view, but also getting full force of the waves.  So you can imagine the view as there are many large boats heading in and out of the fuel stations at high speeds, several catamaran sailboats anchored in front creating an obstacle course, a helicopter buzzing around, and then these crazy kids on the jetski jet boots are just off of the fuel docks!  We just sat back and watched the action!
If you don't know what jetski jet boots are, don't feel bad, as I have never seen them before!  It looks like a large hose connected to the jet pump of a jetski, and the other side is connected to some sort of boots with nozzles on them.  The jetski guns the engine, and it powers the boots, sending jet power through the boots.  This can be a good thing or a bad thing for the jet boot operator, depending on his skill set and whether he is pointed to the sky or the bottom of the river!  It seems that face plants at high speed are par for the course!  The other problem is that the operator of the jetski has all of the control of the power to the jet boots, so rider beware! 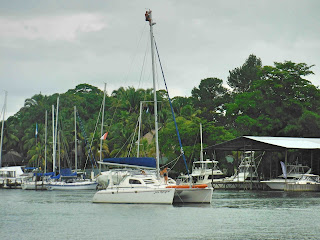 Maybe this wasn't the best day to go up your mast!!!  I think this was before the craziness started. 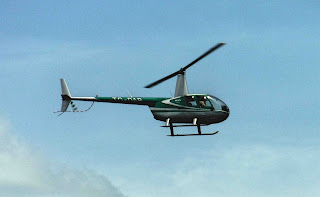 A private helicopter buzzing around.  This was the fast ride form Guatemala City to Rio Dulce! 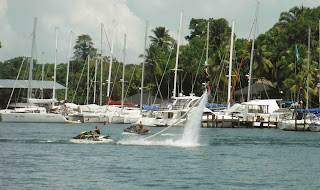 What is that guy doing???  Our first impression!!! 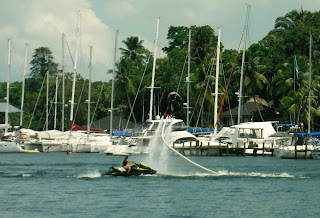 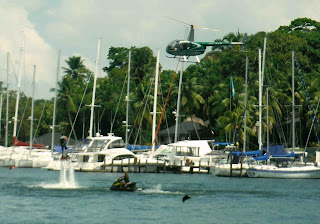 Pure craziness!  Even the helicopter has to buzz down for a close look! 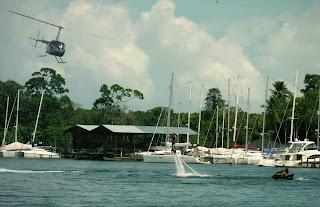 This was a one in a thousand photo, as I caught the helicopter, jet boot rider, and jetski all together! 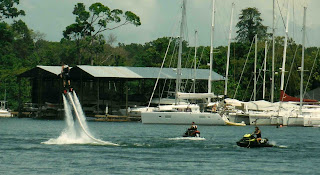 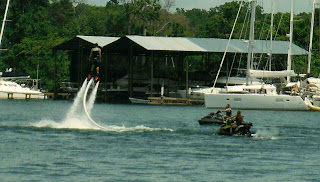 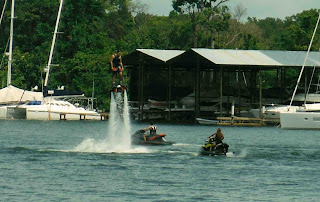 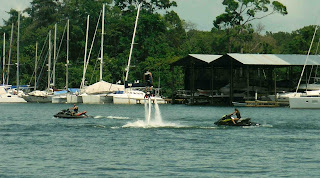 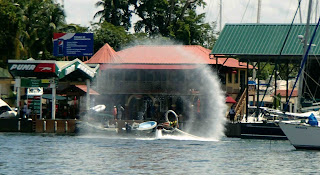 This guy did several flips before the jetski driver stopped the craziness!  I am not sure if he was out-of-control or just being crazy!!!
Video of the jet boots!!! 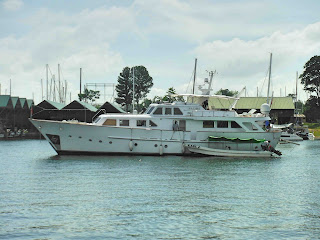 A large power boat gave us satellite internet for most of the weekend, as our marina's Internet was down.  Thank you Maxime Crew network!!!  When they left, so did our Internet connection!
The weekend ended without any incidents that we know of, and all of the Weekend Wallies headed home!  All is quiet, until the next weekend!
Posted by Unknown at 2:18 PM