We have spent the last couple days getting ready to leave Belize. The Moorings team, managed by Renee Brown, has been excellent in supporting us and our boat. It was a shame that we left before the whole team came back from vacation. I rate the team here an A+.
Getting ready to leave Belize, we checked out on Tuesday with Phil and Julie, and then were busy fixing a few small things, getting provisions, and saying good bye to our friends. At the last minute, Termite drove me to town to get a case of Coca-Cola Lite (Diet Coke) and 10 more gallons of drinking water, thanks Termite!! We said our good byes to Termite and Mark (who bought the sister boat like ours), and they casted off our lines. We are getting better at leaving the docks, as there was no white knuckle moments! 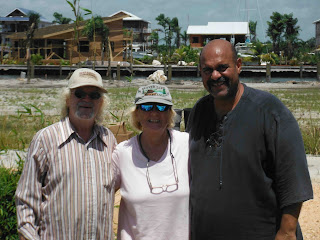 
It is also hard to leave Belize as we are just getting to know our way around and have made some friends. I know mom feels this, as she spent two weeks by herself, as I travelled back home. Also, we really haven't seen much of Belize. I guess that is part of the cruising life, as we are off to Guatemala.
We were actually very tired, as we have been very busy since I returned back from the US. It was nice to motor through the lagoon, as we headed out to the ocean. Once outside of the lagoon, we quickly raised the sails, and headed south to Monkey Cay. We had a very nice sail, traveling on a broad reach, which was smooth in the 5 to 6 foot seas. We only averaged about 5 knots in 10 knots of wind, as I still have a reef in the main. We arrived around 3:00, happy the day had gone so smooth.
As we headed into the cove to anchor, as fishing boat came by and asked if we needed some help. We waved him off, but in retrospect, maybe we should have taken him up! The cove was a little tricky, as the deep water was close to the land on the starboard side (right side). We started to enter in the middle, but the waters shallowed up quickly, with coral heads visible. We quickly retreated, reviewed our travel guide, and headed in closer to the shore in plenty of water.
We noticed two mooring balls, so we were happy we didn't have to anchor. We pulled up to the first one, and mom readied the lines. The wind was blowing very strong, so trying to keep the boat exactly on the ball was difficult. We didn't see any banner on the ball (rope attached to the ball that you hook and connect your ropes to), so mom hooked the eye on top. The problem is that she is 4 feet over the ball, and no way to run the ropes down through the eye. The boat pulled away, and she lost the boat pole overboard. We let the pole go, as it was traveling toward some mangroves, and we could try to find it later. We tried several more attempts at this ball and the next one, but with no luck. We finally dropped our anchor, hopefully ending our struggles. Well, the anchor would not hold at all, even with several tries. The bottom must either be rock or not enough sand/mud to hold. We were pulling up our anchor for the second time when Phil, our friend, and Llidy, a local with a boat, came over and rescued us by connecting our ropes to the mooring ball. We were very happy, as we were tired, and running out of options! Plan C, as we already tried Plan A and B, would have been throwing mom into the water with the rope in her teeth, to connect the balls.  At the time, she wasn't going for that!  It was lucky that Phil and Llidy came by!!! 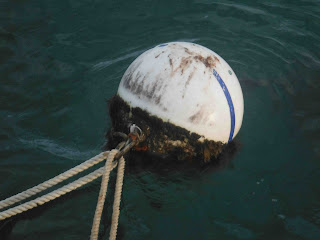 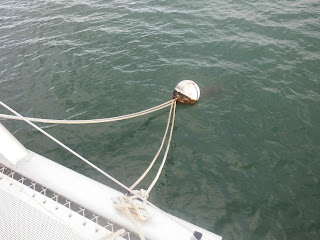 This is what success looks like!
I then took the dinghy out and after searching for a few minutes, found the boat pole, hidden in the mangroves. It was a little spooky to drive the boat into the mangoes, hoping that a snake didn't fall into the boat, or a crock didn't take my hand, but the pole rescue was successful.  Now it was time to chill out! We watched a beautiful sunset and than gazed at the kabilion stars. We could only see one light here, as we are in the middle of nowhere! We saw a large meteor or space junk enter the atmosphere, lighting up the whole sky! It was a fitting end to a long day! 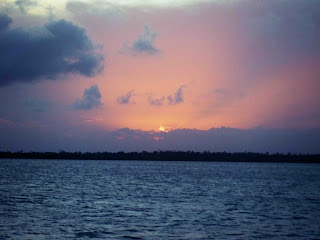 Sunset over Monkey Cay﻿
Posted by Unknown at 12:57 PM