One of the main reasons that we traveled down to Rio Dulce was to have our saildrive boots replaced.  This required hauling the boat out of the water and new boots installed.  This had been done back in July after it was identified on the survey, but because the adhesive wasn't allowed to cure long enough, the rubber boots came off. 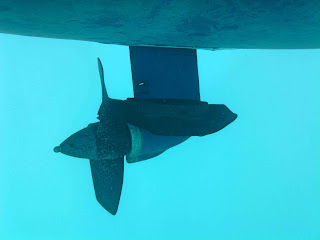 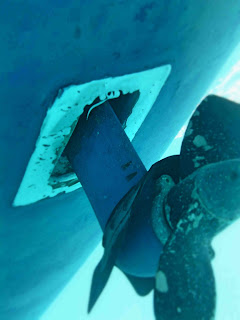 You can see the 3M 5200 adhesive that was used, but obviously didn't hold!
We had made arraignments with the Abel's Marina, the same repair marina that had done the work originally, to stand by their work and not to charge us for the haul-out.  This was good news, as just to haul-out the boat was usually about $700 to $800.  We also decided to have them replace the rubber boots with a fiberglass ones, which should be more permanent.  The function of the boots is to keep air from getting in the gap around the saildrive and causing cavitation, at least that is what I am being told!  We never had any problems, but we wanted the saildrives back into the proper state.
When we first arrived in Rio Dulce, I took the dinghy over to Abel's and talked to Juan, to arrange an appointment.  We both agreed on Monday at 9:00, as this gave him time to build the fiberglass boots.
Bright and early on Monday, we threw off the lines and headed over to Abel's for our appointment.  We had to travel under the large bridge, which is 90 feet high at the center.  There are also some power cables at 75 feet, but since our mast is less than 60 feet, we are good.  I was still a little nervous to go under the bridge.  Mom watched the bridge and the wires as we passed under.  There is always a group of people on the top of the bridge watching the boats come under.  I was hoping that nothing fell down on us! 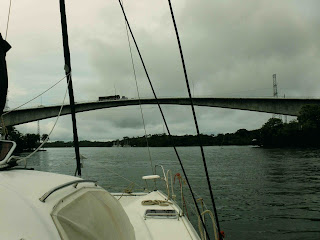 Heading toward the bridge! 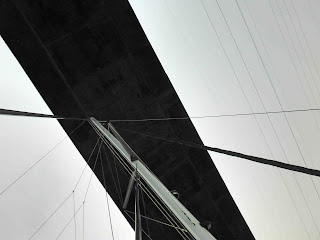 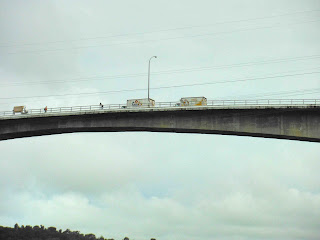 Some people watching us pass under the bridge.
After the bridge, we passed Chiqui's Store (Tienda Reed) on the left.  That is where we can get our propane bottles refilled.  We also passed some other marinas and nice houses on the way to Abel's. 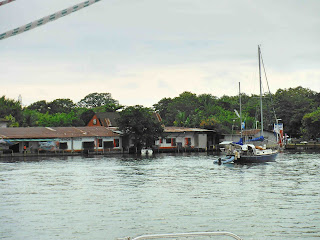 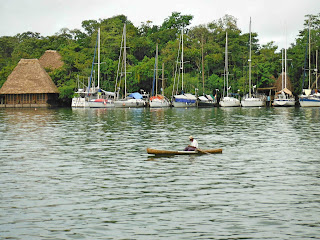 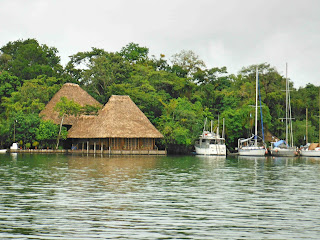 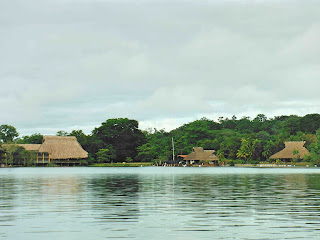 ﻿
Ahead, we could see Abel's Marina.  It looked pretty crowded, so I started to be worried that they didn't remember our appointment. 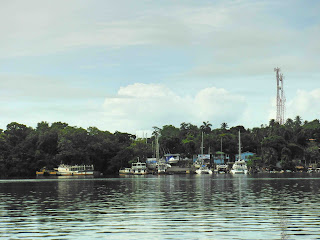 Abel's Marian ahead!
As we approached the Marina, no one came out to help with our lines, so I called the office, and using my best Spanish, I asked if they were ready for our 9:00 appointment with CAPER (still our boat name).  The line went silent for a few minutes, and they asked where we were, so I told them in front of the marina.  They said OK, and then hung up.  OK....so we continued to wait, looking for any sign that they were expecting us.  I finally started to drop the anchor, and some guy ran out and waved at us to come into the concrete slip, next to the barge and tugboat.  It was a little close on each side, but we brought the boat into the slip.   It turns out that this is the travel lift slip, and our boat is small enough to be lifted by the travel lift.  So I felt a little better about things.  Once the boat was tied up, I ran up to the office and talked on the phone to Juan.  For some reason, they didn't write down our appointment, but they would be able to fix our boat today 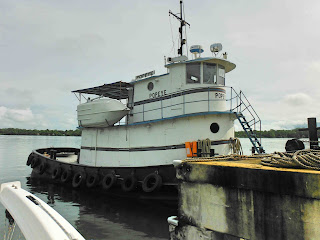 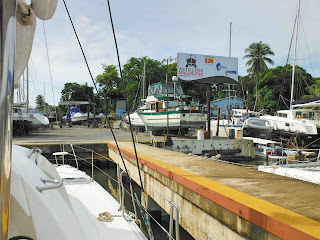 I had to be careful not to bump the concrete sides!  We had bumpers on the port side to tie off, but it was still too close for comfort on the starboard side. 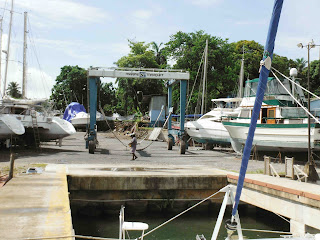 They started bringing the travel lift over, yikes!
The whole thing was pretty cool, once we relaxed a little.  The guy had a wireless controller, and controlled the huge travel lift with his thumb.  Obviously he was an expert, and dropped the slings into the water in front of our boat.  We then pulled the boat over the slings, and he tightened them up.  He then lifted our boat out of the water and travelled with it about a couple hundred feet from the slip.  They then put some blocks of wood under the keels, and lowered the boat, taking the pressure off of the travel lift.  They left the lift in place, adding support. 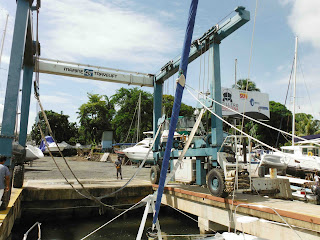 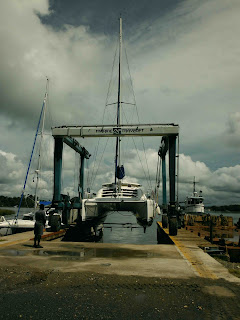 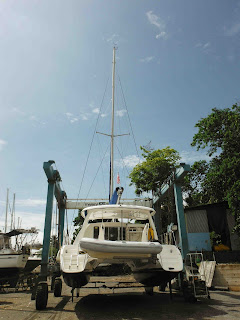 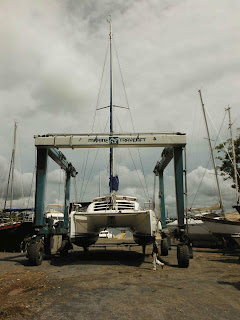 Video of the Haul-Out!
﻿
Once the boat was secured, we headed over to the office to catch up on Internet, and the guys disappeared.  The best I could get from them that is would be fixed today.  So, after waiting for a couple of hours and no work was being done on our boat, I figured that we should go to lunch!  We walked down the road to a resort that had a restaurant, and enjoyed some lunch. 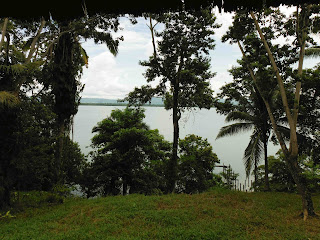 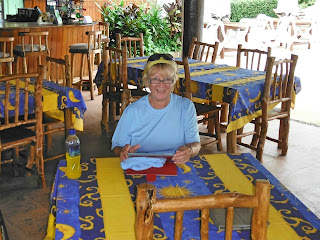 The resort had a little zoo, so we walked through, taking a few photos!  The monkeys were a little shy and didn't like their picture taken.  He kept looking away before I could take a picture.  I finally got a picture, but he didn't look too happy!  They also had some Pizotes!  Costa Rica had these animals, and there were always stealing food and once I had to chase one down that grabbed a girls iPod.  He dropped it right before he went into the jungle! 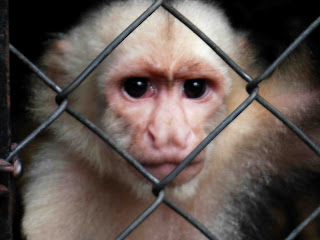 White Face Monkey!  He was mad that I was taking pictures of him. 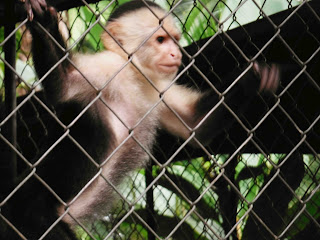 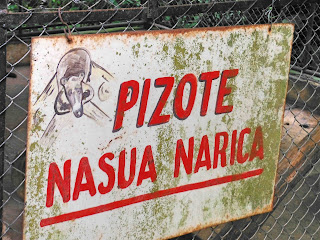 We had these in Costa Rica too!!  I like them! 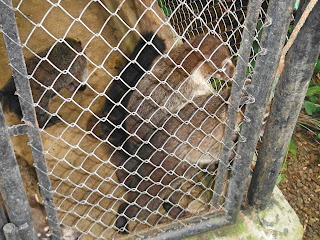 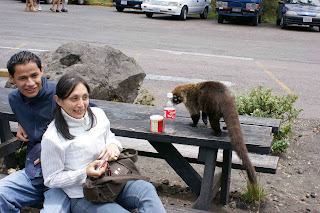 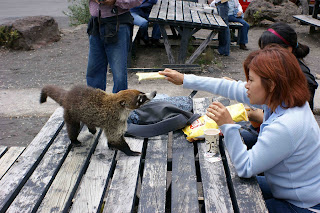 Pizote in Irazu Volcano, Costa Rica
This lady fought back!!!
We arrived back at the boat, and finally after an hour or so, the guys came over and started working on installing the new fiberglass saildrive boots.  They did a good job, applying the glue and little screws to hold the new plates in place.  It was getting close to 5:00 pm, and finally they came over and said that we had to stay the night.  I had already figured that, as the paint had to dry before we could get back in the water. 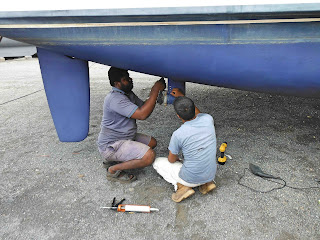 The guys working on the repair 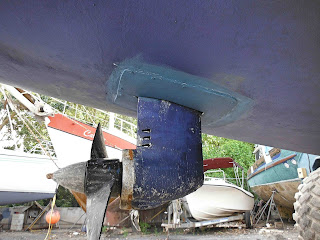 Job complete, just waiting to dry!
We ended up staying the night in the boat, which was very strange.  I could swear that it was moving all night, but I think it was just me being used to the motion while in the water.  We had a good night and woke early to get ready to head back.  After about 9:00 when nothing was happening, I went down and asked the guy when we could get splashed, and he said that they were waiting on us!  I told him that we were ready, so I paid my part of the repairs, and they splashed us! 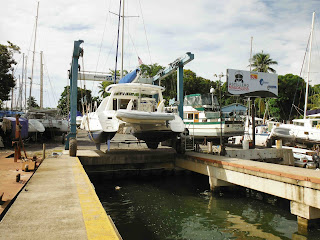 Splash Time!
MokaKat Getting Splashed!
It was nice to be back in the water!  We headed back to the marina, and were surprised that they had found a new slip for us that was perfect!  We were happy to be back at the marina, connected to power again! 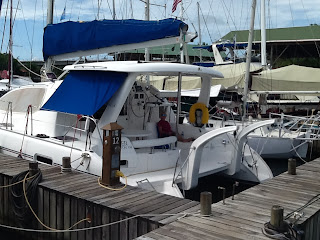 MokaKat sitting in our new slip!
Posted by Unknown at 9:40 PM