Today was an awesome day!  The day started early, of course, but after coffee and some excellent meat filled muffins that mom cooked.  We could hear the birds and howler monkeys howling in the jungle.  It was a very pleasant morning, but then we are off to Guatemala! 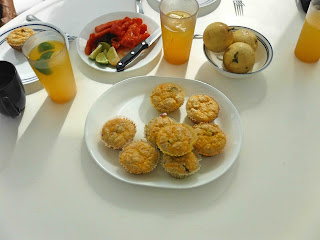 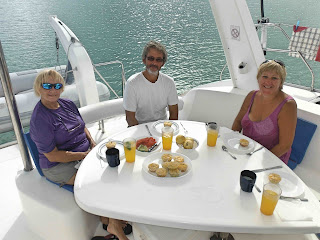 Breakfast in New Haven on MokaKat 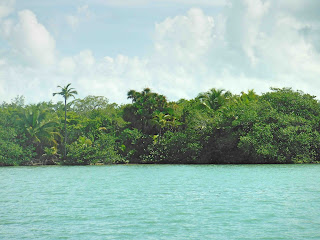 New Haven anchorage - you could hear the many birds and howler moneys in the jungle
The wind was almost non existent, so we raised the sails and motor sailed, alternating between the two engines.  We need to be close to Livingston on Monday morning, so that we can arrive around 9:00 am to begin our check-in procedure.  That usually takes about 3 hours, leaving enough time to motor down the River to Rio Dulce.  We saw an anchor site opposite Livingston, on Tres Puntas, so we headed there. 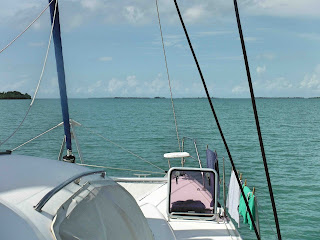 Motoring out of New Haven toward Guatemala 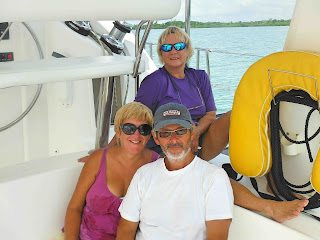 Hard working crew of MokaKat (CAPER)
The motor sail took about 5 hours, as were not in a huge hurry.  We trolled several lures behind the boat, but no luck in the fishing department.  There were times that the Sea of Honduras was almost glass, as we traveled along. We did see one pod of dolphins, but they headed away from us, instead of following along.  Maybe because we had an engine running, instead of purely sailing.  It was a  very relaxing cruise,and we arrived around 2:00 at Cabo Tres Puntas, Guatemala. 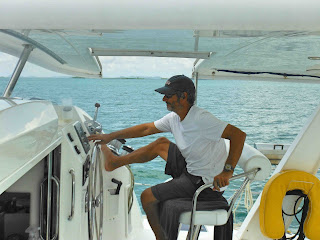 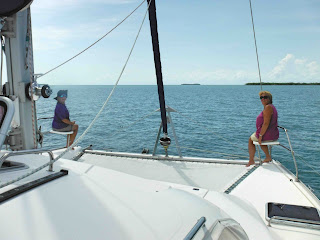 The girls riding up front 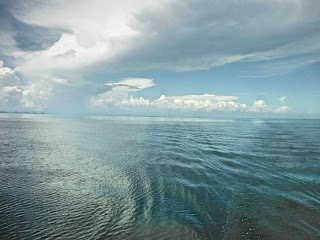 Sea of Honduras - hardly a ripple....
We took down our Belize courtesy flag, and wondered if we needed to raise our yellow (quarantine) flag.  I know before we get to Livingston we need to raise the Flag before check-in.  We decided it would be better to raise the yellow flag, just to be safe.  I guess we will find out tomorrow if that was the right decision or whether we get a special 'fee' for spending the night in Guatemalan waters before check-in. 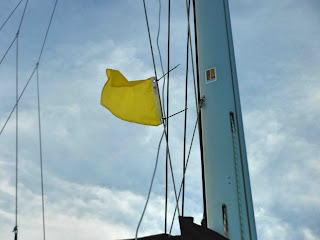 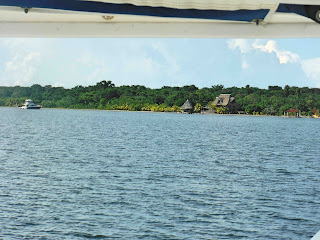 The little cove that we anchored in was just beautiful, with palm trees lining the shore.  There were some small houses on the shoreline, with kids playing.  A couple of times we heard the howler monkeys calling in the jungle.  We relaxed for the afternoon, and Phil cooked another amazing meal of chile with rice!  We are really getting spoiled with the cooking that Phil and Julie have been doing!  We already asked them to stay aboard with us for a couple of months, but they have an obligation to be in Costa Rica on October 5th, so they had to decline.  We really have enjoyed having them on the boat with us! 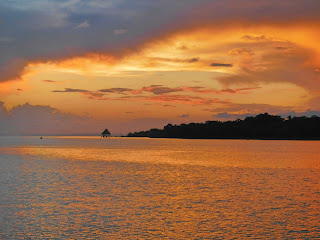 180 degree Sunset Photo
Tomorrow will be a big day for us, as we need to check-in and travel down the river to Rio Dulce.  Once we arrive there tomorrow, we will need to find a marina to stay at for the month of October.