The day started very overcast and the wind change direction, coming from the south west.  This was a disappointment, as we needed an east or north wind to head down to Snake Cay.  After breakfast and a coupe of rain showers, we dropped our mooring lines and pulled up our anchor, and motored out of the bay.  We motored for about an hour, and then we raised the sails.  The wind was only blowing about 5 knots, so we were averaging less than 3 knots, and sometimes as low as 1.5 knots.  We finally started one engine, and motor sailed for another 30 minutes or so, until the wind kicked up a little. 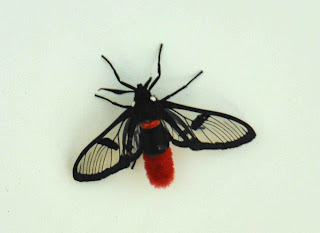 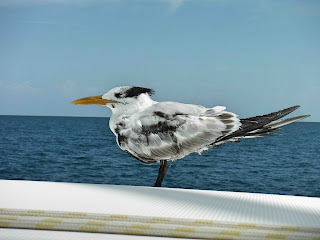 This seagull landed on our boat and rode with us for a while!

We had a nice sail down to west Snake Cay, which is one of four cays grouped together.  They are also part of a reserve, so there is no fishing or catching lobster, so my spear gun and lobster stick stayed in the boat.  West Snake Cay was a beautiful little island with a nice white beach.  We anchored just south of the beach in 8 foot of water.  The approach to the island was tricky, as there was a shallow bar with coral heads on the west side.  We had to go around the bar, coming directly from the south to find deep water.  Once the anchor was down, we took the dinghy over to the island.  We could only stay there for a couple of hours, as it was not a safe overnight anchorage.
Once on the island, we were the only people on the island, and we were enjoying the privacy!  During our tour, a large kamikaze hermit crab flew out of a coconut tree, attacking from above, and latched onto my thumb, (well, maybe I picked it up).  I didn't have time to wait for lighting to strike, so I quickly ran to the ocean and put him underwater.  He then released the death grip on my thumb.  Yes, there was blood spilt!  Note to self...don't touch the wildlife!!!!! 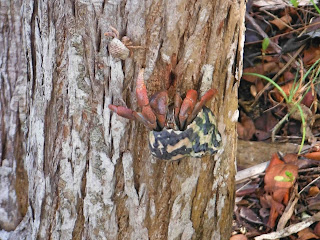 The little cousin of the one that attack me!  I didn't get a mug shot of the attacker!﻿
My mom found her dream house, so we posed for a picture!  Note: no running water, electricity, or toilets...not sure what she sees in housing! 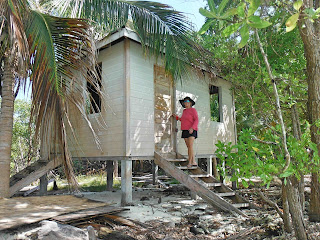 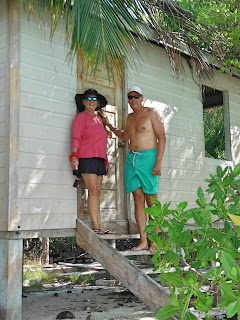 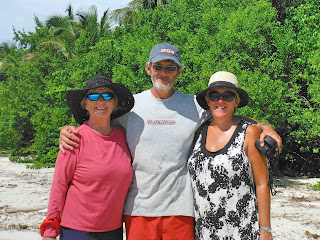 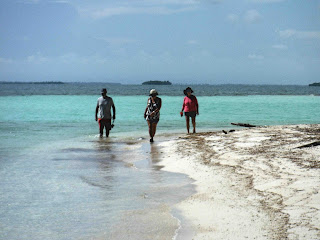 Note:  We didn't see any snakes on West Snake Cay, although we didn't look too hard.  There was a kazillion hermit crabs of all sizes, just don't pick them up!  The islands should be named Hermit Crab Cays if someone would have asked me, although no one did!
So after our tour, we grabbed our snorkel stuff and headed over to the reef.  Unfortunately, once we were all in the water, a large catamaran pulled up and anchored next to our boat,  they all jumped off heading over to our private island paradise. 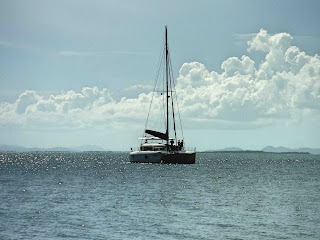 Our deserted island was being invaded!  Pirates???, nope, just a local boat enjoying the island!

Shortly after, the local ranger, who saw all of the activity on his island, came over to investigate.  Suddenly our private island of 4 people had expanded to almost 20, as the ranger had a group of volunteers on board.  I was peacefully snorkeling in 12 feet of water, enjoying many nice fish, when I saw the group on the island!  What?  So I swam back to the dinghy to see what was going on.  The ranger wanted to see the captains of the two catamarans, and after we looked around at each other for a minute, I realize that he meant me!  Since this was a park, we had to pay $5 each to visit the park.  We were happy to pay the $20 as we were a little worried, as we checked out of Belize three days before!  We headed back to the boat, paid our fees, and headed over to New Haven to spend the night.  I forgot to take any pictures of the ranger, but we usually don't take pictures of officials.

New Haven was a beautiful harbor with palm trees, many birds, and howler monkeys.  It was very protected, so we felt good to be here for the night.  We did have the harbor all to ourselves.  Phil cooked a delicious pork tenderloin in a mustard sauce that was most excellent, and there were no left overs.  We enjoyed our dinner and sat around and talked for an hour or so.  Everyone then crashed early, as we have a long sailing day tomorrow! 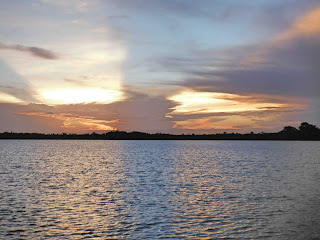 Another Beautiful Sunset!!!
Posted by Unknown at 10:54 AM