Wow, what a long day, and it is just 7:00 pm!  We prepared the boat for our voyage, getting gas for the outboard, bread from the local store, filled the water tank, and after posting our blog, we headed out!  We had a side wind, so we came up with our plan to cast off the line closest to Termite's boat and as I pulled forward, mom would cast off of the front line that is connected to a pole.  Well, as soon as we turn the first line off the wind started pushing into Termite's boat.  I ran over and pushed us off, and checked on the bumper, but it was hard to hold our boat off.  Finally, I was able to move forward a little and finally squeeze by Termite's boat without any scratches, not exactly smooth....  I really don't like how we are backed in and tied to one pole on the front.  There is a concrete pier behind us, so if you make any mistakes on the front line, you could hit the pier...ouch!  So far we have had help putting the boat back into the slip, so I am sure after today, they will insist!

We motored up about 45 minutes to Placencia Harbor and we got ready to drop anchor.  I was thinking that this would be easy, as it was open with a nice breeze.  Well, mom is still a little challenged with driving a boat with two engines.  Luckily, there was plenty of space to circle a round a little, as I tried to tell her which way to steer and which engines to run.  I also noticed a group of guys sitting on the pier watching our show.  Well, we finally got in the perfect position, and I went to drop the anchor, but nothing.....the new anchor wouldn't go down!  So I played with the windlass raising the anchor up one inch and releasing it, but the top of the anchor would hit the fiberglass housing and would stick.  I finally got the emergency tiller, the only 'bigger hammer' that I could find and went beating the heck out of it....but it wouldn't budge.  The group of guys on the pier got larger.  I was sweating, hot and our easy anchoring has turned out to be a fiasco!  I finally drug out the secondary anchor, and after moving the boat in a few circles, I dropped the anchor and tightened the line.  We were anchored, but I didn't trust the secondary anchor.  I took a break, drank some water and thought how we can get the primary anchor down.  We finally poured some dish washing liquid on the areas that it was sticking, and using our emergency tiller aka 'larger hammer' I beat it into submission, and it dropped a few inches, free from the housing!  I was expecting applause from the cheap sets, but I am sure they were still puzzled why I was beating the hell out of my new catamaran.  So, then I manually pulled up the secondary anchor, and then circle around a few times, and finally, we had a text book anchor drop and set!  I was exhausted, and we haven't even made it into the village for supplies! 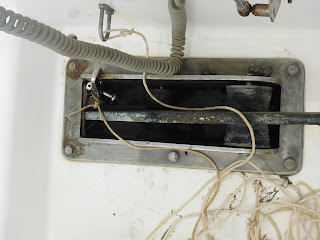 A shot of our anchor housing and the stuck anchor on left. 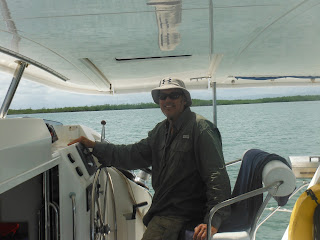 Captain Dale motoring in the lagoon 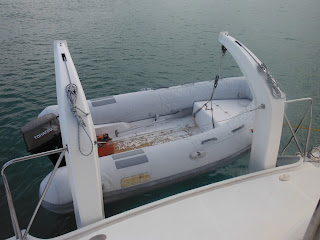 Our dinghy in the davits for the first time 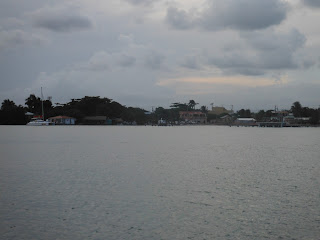 Placencia Village from the harbor

While waiting for fresh chicken at Brenda's BBQ stand, the cheap seaters came over and asked what I was doing to my boat, with all of the banging.  I had to laugh, but told them about the hanging anchor and my bigger hammer.  I think there was some relief in the group, that I wasn't just beating the hell out of my boat for fun!  The chicken was great, we scored some fresh fruit and veggies, and we finally have a local cell phone!  Life is good in Belize!

BTW, I also broke down and bought a new fishing pole!  I have my fishing license, fishing pole, and my lobster stick!  I am ready to eat lobster and fish!!!!
Posted by Unknown at 11:34 AM