We were disappointed when we awoke on Thursday, as the day was cloudy and there was no wind.  Actually there was some wind, but it was from the south west, the way that we needed to go to get back to port.  We tried a couple of things with our port engine, but it still wouldn't pump any water.  We didn't get any engine manuals with the boat papers (they are looking for those), so I really didn't know what else to do, except not run it.
Our first challenge was to get up our secondary anchor, that we had been advised to put out while on a mooring ball.  To run the windlass, you usually need the port engine running.  I guess the windlass runs on the starter battery of the port engine.  So I started the engine, and because I was so nervous about overheating the engine, I never could get the windlass to pull up the secondary anchor correctly.  The secondary anchor is mostly rode, so on the windlass I should be able to loosen up the chain side, and run the rode over the other side and pull it up.  For some reason, it kept overlapping itself, causing the whole thing to bind up.  Since I was so worried about the engine, I finally shut down the engine, and used the main winch manually to raise the secondary.  We were both sweating hard by the time we finally got the secondary anchor in!  Of course it hung on the mooring lines, making it a little harder!  We hadn't even left the mooring ball, and we had our workout!
We dropped off of the mooring ball and headed back to port.  It was about a three hour motor, with one engine running, on flat seas.  It was rather peaceful motor, and I got to enjoy the autopilot and was really lazy driving back.  Once we got close to the marina, I called the Moorings base, and asked for assistance to dock the boat.  Backing between a pole and then stopping before I hit the concrete bulkheads was too much for me on one engine.  I will still be a challenge for me, as it usually takes three people to man the lines.  I guess you can watch out for that blog in the future, to see if we can actually do it!
Once back I showed the pictures of the sail drive boot to Renee and Kevin.  They couldn't believe that it had happened, but we will have it put back on in October, when I travel down to Guatemala to the travel lift.
Safely back to the marina!  The next task is to find a dinghy and motor, as without it, we are limited to what we can down out on the cays. 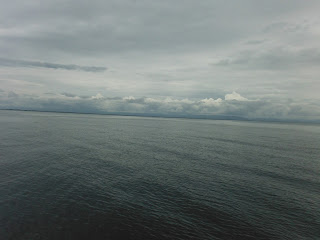 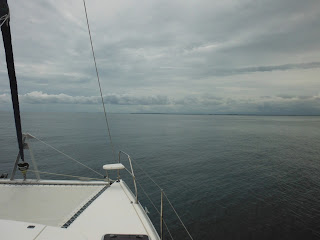 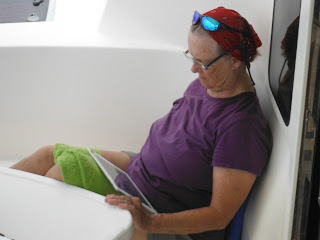 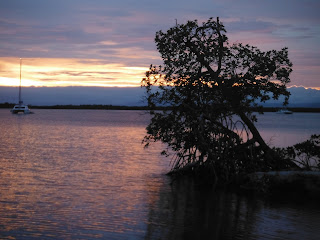 Sunset back on the lagoon﻿