Well, it's day 2 and we are still at Placencia Harbor.  Last night started out extremely well, with a nice easterly breeze and an almost full moon.  This was our first night on anchor, so I was a little nervous to see how well we anchored. We had two little squalls come through during the night, and I woke up, closed all of the hatches and sat and watched to see if we were dragging anchor.  So far so good.  The squalls were coming from the east, and we were protected by Placencia Cay that we anchored very close to, a recommendation from the local team.
Well about 5:00 am, all of that changed.  I woke to high winds, lightning, and large waves.  I looked out my porthole and instead of seeing the house lights on the island, I was seeing the village of Placencia!  The wind was coming directly opposite, from the southwest.  The locals call this type of storm a Bayamas, and they can be dangerous.  We were totally exposed and besides that, if the anchor drug, we would be pushed right in a dock and island, now behind us about 200 meters.  I jumped up, put on my raincoat, and started the engines, putting them in a slow idle, but in gear.  Over the next hour or two, the winds hit 24 knots, but our anchor held. 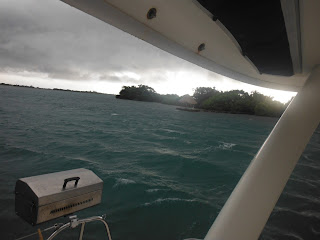 We were too close to the dock and Placencia Cay!
When we finally had a break, we decided to pull up the anchor and move into the middle of the harbor, with more room to drag.  Well, we have never raised the anchor before, so I was worried that it might not go as smooth as I wanted, plus we were still in winds and waves.  I had mom run the windlass, and I motored the boat.  We took off the bridle, and the anchor came up easy.  We then motored over across the harbor and dropped the anchor in a new spot.  Everything went well, and we finally felt secure, with all of the chain out and the boat nicely anchored!  Wow, what a long start to the day!
Quick video of how our morning started!

It finally cleared up around 10:00, but I had to crash for an hour or two.  I guess we will stay another night in Placencia harbor, as now there is no wind and it is too late to leave.

It was ironic that we are anchored in front of a resort called 'Paradise Resort'.  It was anything but a paradise this morning!!!