We left the marina about mid morning, heading to Wippari Cay, as the rain continued.  It looked like it was going to stop at some point, so we decided to head out.  The Moorings usually wants to take your boat out of the slip for you, probably for the safety of their boats, but since the only boat between us and the lagoon was Termite's, we headed out without assistance.  We were supposed to get a lobster stick from Cricket, but he was tied up with his work, so we didn't wait.

The motoring through the lagoon was easy, as I set up way points and tied them together with a route on the chart plotter!  Yes, I read the manuals yesterday!  Once we cleared the lagoon and the little island, we motored up north, as the wind was less than 5 knots.  We then decided that we should sail, as we had time and we needed the practice.  Mom is still struggling with steering the boat, so keeping it heading in the wind was a challenge, as I tried to raise the mainsail.  It took me a couple of tries to finally get the mainsail raised all of the way.  It was hung in the lazy jacks first, then a little rope that we use to hold the main halyard got caught in one of the sail tracks.  This took a few minutes to figure out, but one that was cleared, the main was up!

We were sailing at .9 knots in 2.5knots of wind for about 30 minutes, before some wind finally came and saved us from pure boredom.  We figured that we needed the practice anyway.  The wind finally came up to about 10 knots, and we were running between 5 and 6 knots.  The problem was that Wippari Cay was directly into the wind.  So we tacked a few times, making it about half the way there, before we finally dropped the sails and motored the rest of the way. There were reefs all around, so we had to be careful.  I think this is one of the easiest cays to get to, so we will need to continue to practice.
We saw several dolphins that came over to check us out!  One of them jumped clear out of the water, splashing back, really enjoying himself!!!

Luckily, one of the mooring balls was open, so we decided to use it instead of anchoring.  We had our plan down, but still it took three tries before mom could catch the pennant on the ball.  It turns out that we have two boat hooks, and she just happened to grab the short one.  Next time we will be better!

Once we were securely tied to the mooring ball, we wanted to snorkel, but we don't have a dinghy, we will have to swim about a 100 yards to get the reefs.  We will do that tomorrow!

We had great broiled chicken and corn for dinner.  It was amazing sitting out with open seas around and a nice breeze.  For once we really feel that we are cruising!!! 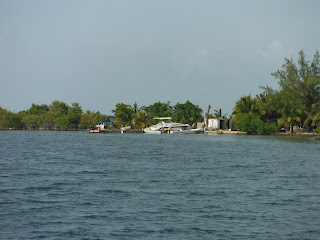 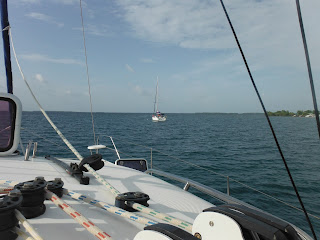 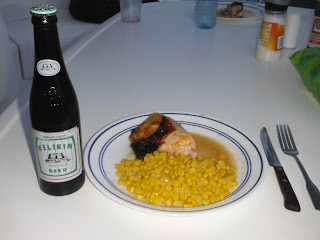 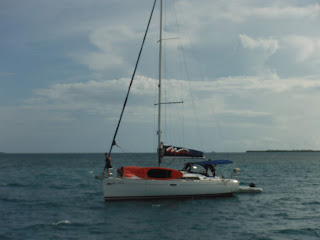 There was another Moorings boat, Mango, that came later and took the other mooring ball.  They were a family from Dallas.  Here is a picture of them leaving the next day, and hopefully we can get their email address to send them a couple of pictures.