I want to apologize for the rant for the next few paragraphs, but I need to express my thoughts!  I do have to remember that we are on a catamaran, and some people think that we are rich, but every cruiser has a budget and a cruising kitty, that will eventually run out!
Ok, the night that we ate dinner and the island caretaker wanted to charge us $40 for the entry fee, I thought that discussion was over.  I had promised Desiree some fishing line, as I had a large spool of 50 lb. test, and she was out.  So after I snorkeled (and caught 3 more lobster), I ran the dinghy over to the island to give her the line.  As soon as I approached the little restaurant, the caretaker, I can't remember his name, approached me and told me that I was a liar and that I had stayed on the island the day before.  He also said that I was catching illegal lobster, as there was a size limit, and he knew all of the spots, and the lobsters were too small to take.  Also, he said that I needed a fishing license, and he knew that I didn't have one, because no one buys the license.  Wow!  I stepped back surprised, as I was now only on the island giving his girlfriend some free fishing line, and now I am being attacked!   I calmly explained that I had a valid fishing license and the legal limit for lobster was 3 inches from the horns to the back of the main body, and all of my lobsters were at least 3 inches.  He was very agitated, so my statements didn't seem to make any difference in his attitude.  I finally just walked away from him and gave Desiree the fishing line and left the island.
I believe that he probably felt that the lobsters were his property, and he was upset that I caught them before he did.  The disappoint part is that we spend more than $50 for a dinner that usually would be half that price back on the mainland.  It is visitors like us that keep this island going, and to have a bad experience by the caretaker does not help.  I also was legal and paid $25 for the week long fishing license.  I found out later that RGroveMarina, the one next to us at the Moorings is responsible for the management of the island.  I have already reported to the Moorings about this incident, so that they can get a clear understanding of the rules.  Ok, take a deep breath, rant off and I didn't take any pictures of this incident! 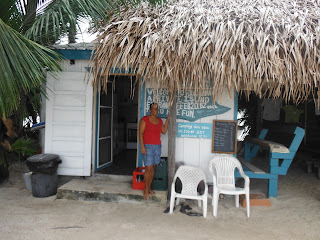 Desiree and the Restaurant on Ranguana Cay
I was ready to head back to the Moorings, as it was 11:00 and it could take 5 or 6 hours to get back.  The Moorings closes at 5:00, and I needed help getting the boat back into my slip.  Yes, I know, I am still a baby at parking the catamaran into the slip.  When we left, there wasn't any wind, so we started motoring.  I really hated motoring 20 NM back, but once we got away from the island the wind kicked up, and we raised the sails!  While looking back, we saw black clouds coming from the southwest, another possible Bayama.  We were sailing for about an hour, keeping ahead of the storm, when the wind died, and then started coming from the southwest.  I started both engines, and we motored for the next hour, getting further east of the storm.  Finally the wind came back from the NE, and we raised the sails again (a double workout for me today).  We were running 6 to 7 knots in 15 to 20 knots of wind, and it was fun!  We were flying!!!  We made record time getting back to the lagoon, and the guys helped me back into the slip, closing our another trip for MokaKat!
I really enjoyed the trip to Ranguana Cay, even with the incident with the caretaker.  It was very beautiful and had excellent snorkeling.  The next time that we go, we will stay off the island, which is a shame for them to loose the income and for us not to see the island.  Maybe they will clarify the rules so that there is not any confusion on what fees are to be paid.
After we cleaned the boat, we invited Termite to come over and share our lobster dinner with us!  He came over and we all had a lobster, rice and avocado!  It was a nice end to our Ranguana Cay trip. 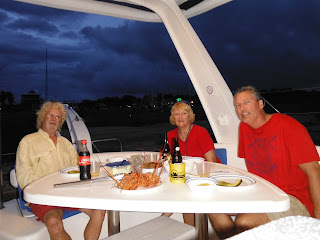 Sharing our lobster with Termite﻿
Posted by Unknown at 9:52 PM